Today a 40-year market veteran sent King World News an incredibly important piece that reveals what the super-wealthy are doing with their money after a wild week of trading.  This piece exclusively for KWN also discusses why policymakers now find themselves trapped.

March 23 (King World News) – Antonie van Leeuwenhoek is credited with being the “Father of Microbiology”. He lived from 1632-1723 and was the first person to observe micro-organisms through a magnifying lens. Van Leeuwenhoek referred to them as “cavorting wee (little) beasties”. Our political and monetary little beasties were at it again last week.

All eyes were focused on the announcement from the Federal Reserve after their regularly scheduled meetings on Tuesday and Wednesday. What should not have suprised anyone was that the Fed confirmed that the possibility of raising rates in the foreseeable future is zero. A parabolic Dollar, a weakening global economy, a collapsed price for oil, and hundreds of trillions of accumulated debts, deficits and obligations precluded any change in policy….

Looking back, one really needed to focus on a single data series to understand what policy has been employed since 1970. Throughout those decades, there was high drama around the Fed’s policies, as witnessed last week. However, the chart below is representative of the core policy of the elites, as implemented through their proxies — the central banks. The only real break in the series occurred in the 2008-09 meltdown that threatened to bring down the entire world’s financial system. At least that is what were told. 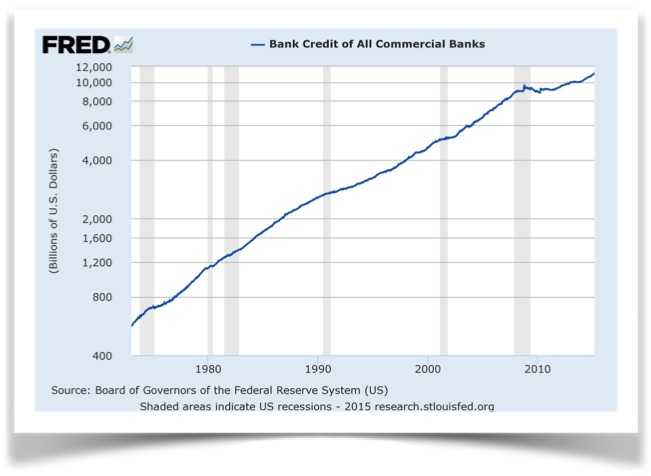 Milton Friedman advocated a constant increase in the money supply, but the rate he suggested matched the long-term real rate of growth in the U.S. economy. He intended that it would facilitate growth, not attempt to create it. Instead, the rate employed has virtually always been substantially above his recommendation. One could argue that the global economy required more dollars and more credit than Friedman imagined, at least in the beginning decades of the chart. However, the rate of growth never wavered, even though the global economy began to lose steam in recent years.

Not being able to raise rates is only one of many “bad news” realizations for the central banks. The very liquidity that has swamped the global financial markets is coming back to bite them. The world is deficient in employment, economic growth, and a decent return on savings. What central banks have been offering is more liquidity and the possibility of a respectable savings rate. Now that interest rate hikes are off the table and grotesque levels of unwanted liquidity abound, their only option is to create more liquidity for which there is no demand. The central banks are now hoisted on their own policy petard.

Perversely, this is why we saw the melt-up in just about every asset class post the Fed’s announcement. The rush for real assets is on, and the words from the Fed were the sound of a starter pistol going off.

We are not looking at a reprise of the Weimar Rally in the early stages of Germany’s hyperinflation last century. At least not yet. Their circumstances were different. Post WWI, Germany was not the world’s reserve currency. Germany also was forced to pay huge indemnities to the victors that were impossible to service. Perhaps the unfunded social programs around the world could be considered nascent reparations of a sort if the elites are unable to maintain order, but that is likely years down the road as long as the benefit and retirement checks keep coming.

In the debt market, positive U.S. yields for longer-dated maturities look relatively attractive for those who must own fixed income. For stocks, the shares do represent claims on real assets. With collectibles and Manhattan penthouses priced in the stratosphere, there will be a scramble to own shares by institutions, individuals, and corporations with excess cash. It is said that valuations are high, but we have lived through price-to-earnings ratios ranging from single- to triple-digits. Never have we seen interest rates this low. Who is to say that stock P/Es cannot regain high double-digit, or even triple-digit levels again?

It is also true that there will be beneficiaries of government and social largesse. With a world arming to the teeth, the defense industry is going to do well as far as the eye can see. An aging population is also going to require a great deal more health-related products and services. There are many more cycles left to go in emerging technologies.

As sectors such as these become more and more dominant in the composition of the popular indexes, a “Nifty-50” market seen in the early ‘70s or a technology dominated S&P 500 seen in the late ‘90s will develop. However, portfolios can benefit between now and then through common sense and judicious stock picking. Follow the money to gain insights as to where to invest.

The oil market decidedly acts as if the bottom has been seen. The Saudis continue to protest to an unbelieving world that their fingerprints were not all over the smash down. However, the Saudis also admitted that even they will need more oil for their domestic refineries. Meanwhile, global demand continues to grow. It is a perfect set up for investors to take their positions. Substantial upside awaits those with courage and a long-term perspective.

What The Super-Wealthy Are Doing With Their Money

What was particularly heartening about the close of the week was the strength in the precious metals and the miners. It does look like a powerful bottom was put in place. Perhaps the migration of the gold market from London to the Far East is finally loosening the grip of the manipulators. It is also likely that the shopping list for real assets by the super-wealthy is firmly including gold and silver. Whether this is another “wash, rinse, repeat” cycle is impossible to say, but investors should take full positions in both metals and miners at these levels to benefit along the way.

***ALSO RELEASED: The Biggest Central Bank In The World Is Now Scared To Death CLICK HERE.