Despite today’s pullback, a very bullish sign for gold and silver is flashing green, plus more signs of serious economic problems.

Bullish Indicator For Gold & Silver
August 15 (King World News) – Graddhy out of Sweden:  This ratio chart shows that silver miners have broken out vs larger gold miners. This is what we want to see as it means the more speculative, smaller silver stocks are outperforming the larger gold stocks. Means the market is buying risk up from the low. 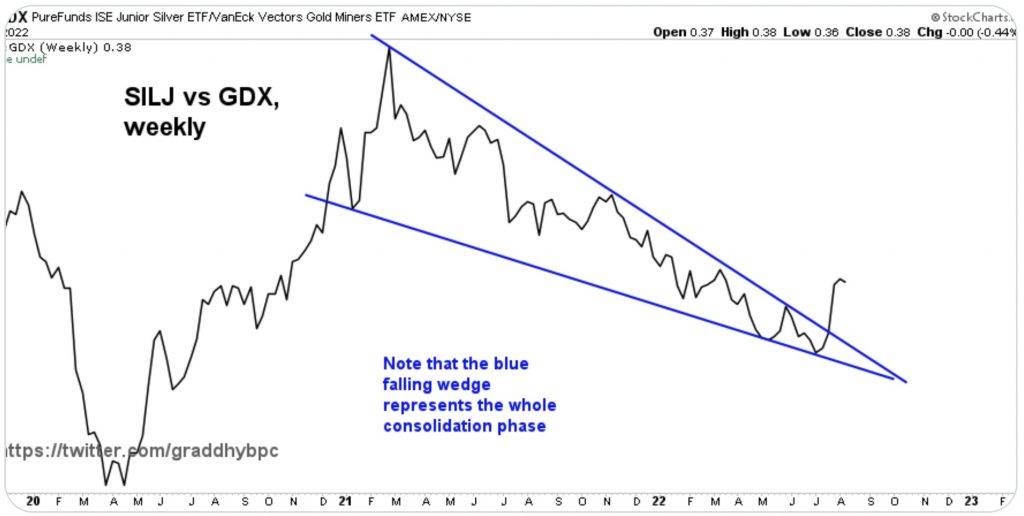 Trouble For Homebuilders
Steph Pomboy:  The -35 point decline in the NAHB Index so far this year is the fastest in history (outside Covid). Faster even than during the deflation of the housing bubble. But, no. We’re not in recession.

NAHB Collapse To -35 Is Fastest In History! 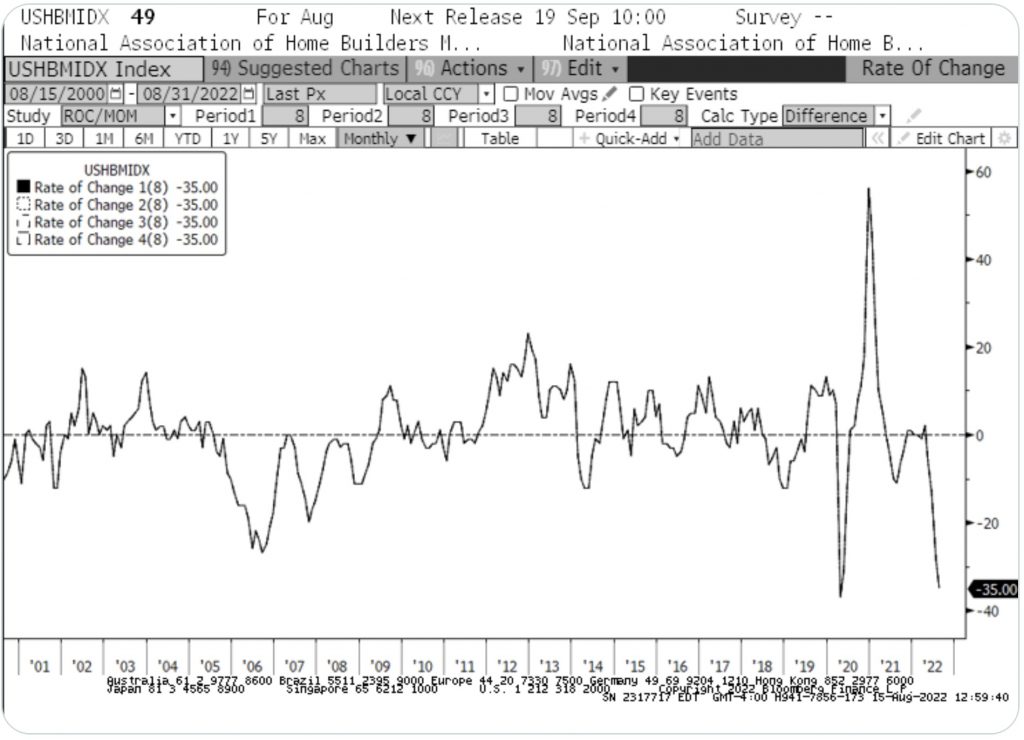 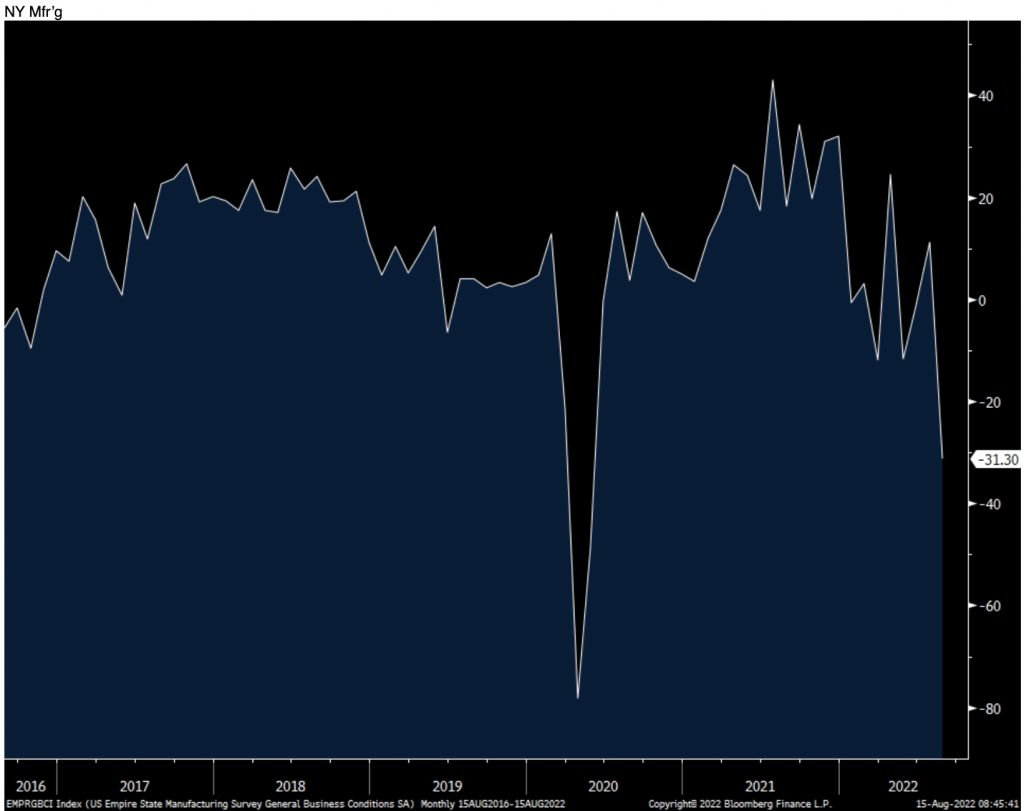 Shipments dropped by almost 50 pts m/o/m to -24.1. Backlogs fell further below zero at -12.7, its 3rd straight month under. Inventories were down by 8 pts. Employment dropped a touch more than 10 pts to 7.4, the lowest since April. The workweek went negative at -13.1. Delivery times also went negative. As for pricing, those paid dropped to the slowest since January 2021 but prices received rose a touch. 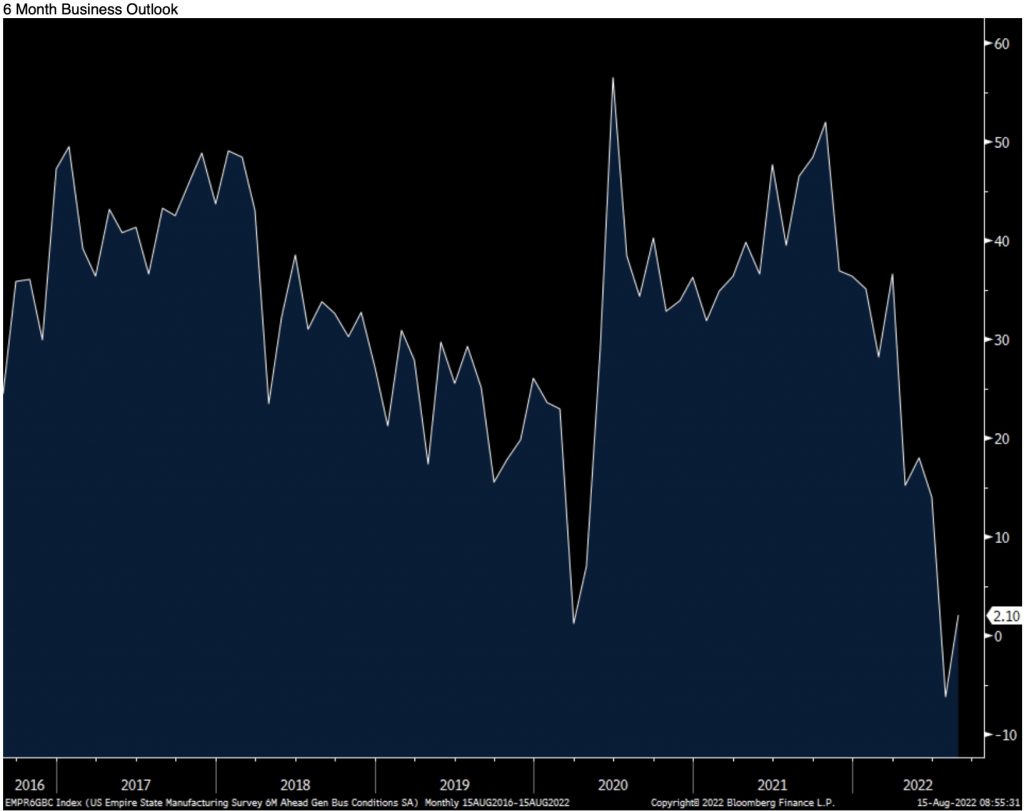 Bottom line, the NY Fed said this was the “2nd largest monthly decline in the index on record, and among the lowest levels in the survey’s history.” Now we still of course have many more regional manufacturing survey’s to look at to see if this is a one off or not but such a rate of change is unlikely to be isolated to this region. So, go on and continue to debate the semantics of whether we’re in a recession or not but we should be paying much more attention to the trajectory of economic activity and this was an ugly report.

With respect to wages, last Thursday the Atlanta Fed’s wage growth tracker came out for July and it saw an increase of 6.7% y/o/y for a 2nd straight week, the highest since at least 1997. 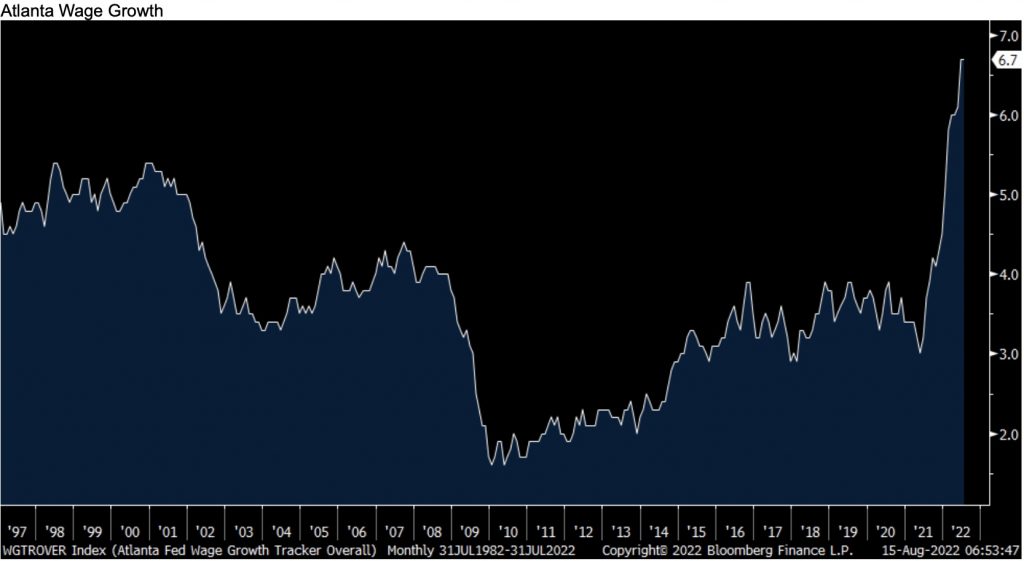 The wage growth for a job switcher was 8.5% from 7.9% in June. If one stayed in their job, the wage growth was 5.9% vs 6.1% in June. The high skilled worker saw the fastest wage growth in 20 years at 5.1% where the low skilled workers wages rose 6% for a 2nd move, a high in this data. Of course all of these stats are still running below the rate of inflation which is the obvious strain on consumer spending that is being seen for lower income people. Also, these multi decade highs in the pace of wages will lead to further profit margin degradation that companies will still try to mitigate with higher prices.

Tighter Lending Standards
We know we’ve seen a rather sharp rise in the cost of capital and now we’re seeing tighter lending standards from the banking community. The Fed last week said that 24.2% of medium and large banks tightened standards for C&I loans from 1.5% easing in Q2 and 14.5% easing in Q1. That is the biggest number since Q4 2020. 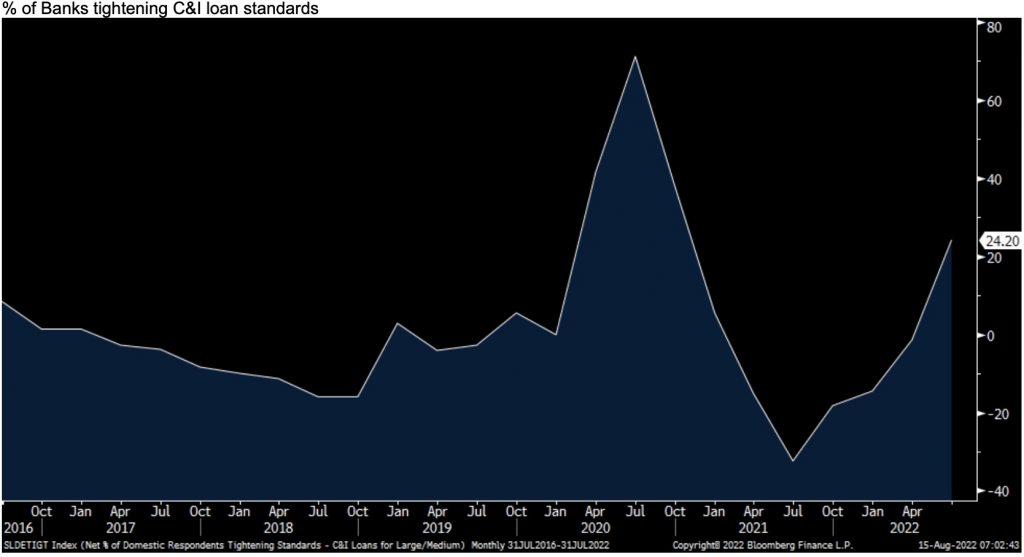 Demand for those loans did rise. Standards were tightened for commercial real estate loans but were unchanged for residential real estate. The demand for CRE loans were softer for construction and land development. Demand for mortgage were weaker but did rise for HELOC’s. Standards for consumer loans like credit cards and auto loans remained unchanged. Loan demand rose for credit cards but fell for auto loans.

Bottom line, it only makes sense for banks to be tougher in their loan underwriting process in a slowing economy so we’re now going to have less businesses get loans and for those that do will be paying up for them.

Homebuilders Getting Worried
The August NAHB home builder sentiment index is in contraction now at 49, with 50 the breakeven line. That is down from 55 in July and below the estimate of 54. 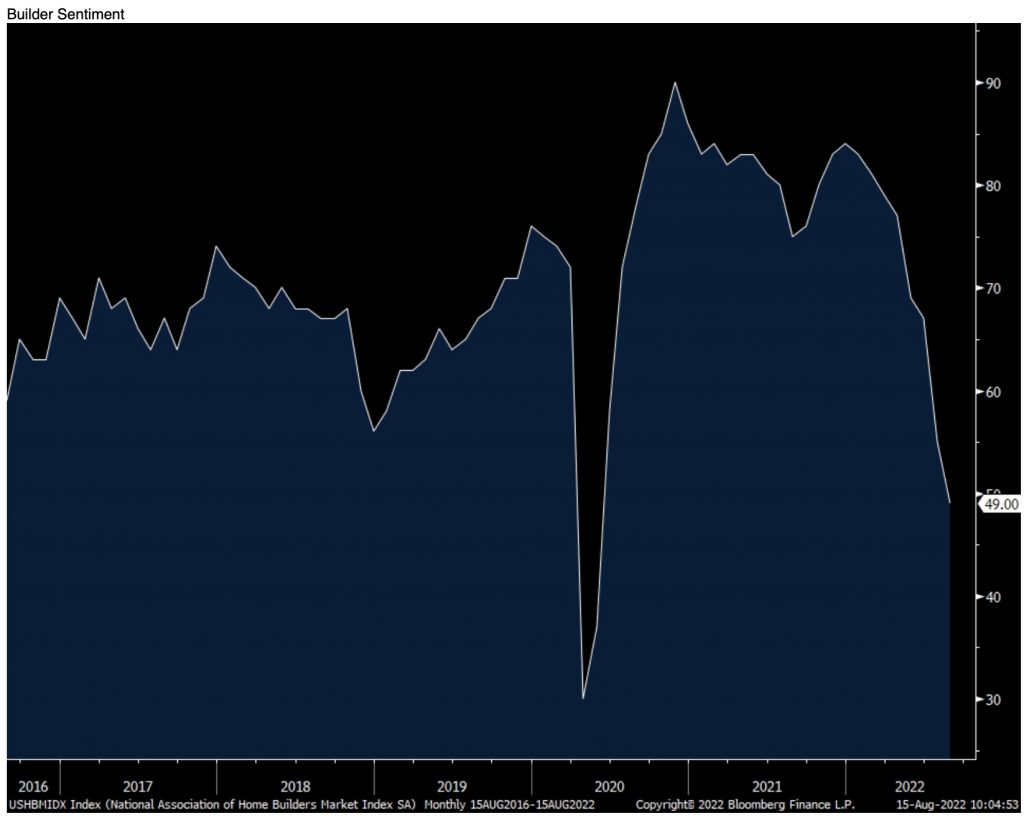 The Present Situation fell to 57 from 64 while the Future Expectations component fell another 2 pts to 47. More expensive homes, up 40% over the past 2 years, and higher mortgage rates drove a 5 pt drop in Prospective Buyers Traffic which is now down to 32, 18 pts below the breakeven pace. 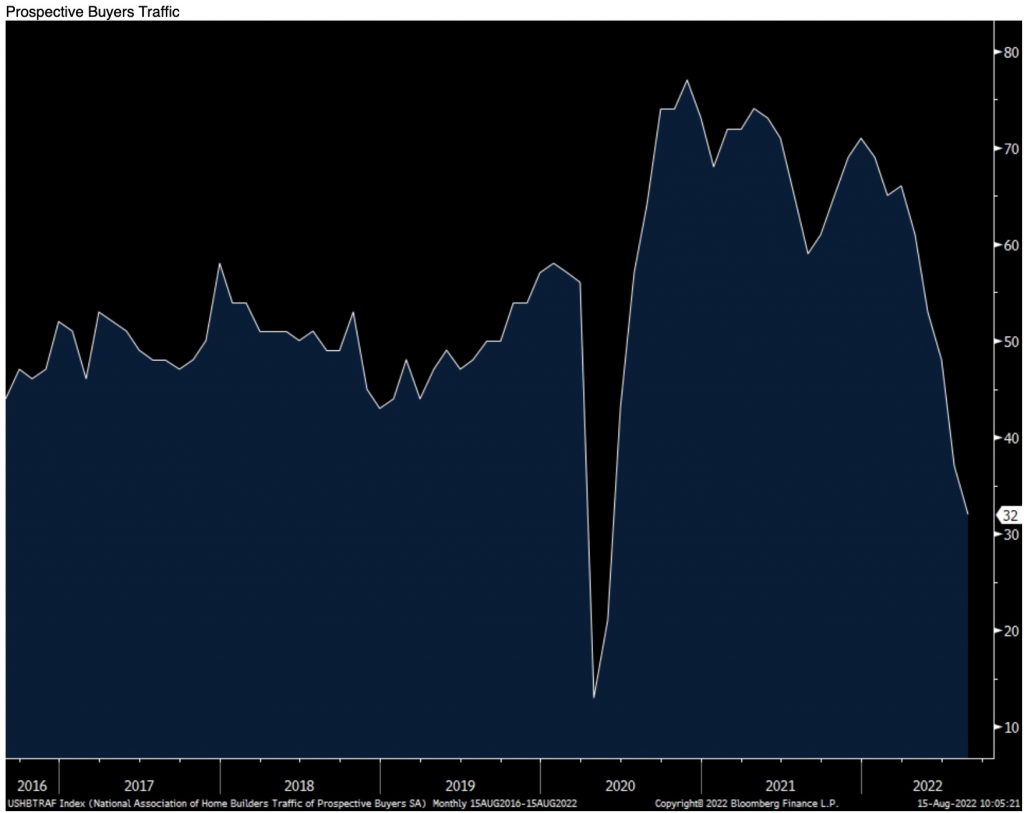 Also, that buyers traffic number is at “the lowest level since April 2014 with the exception of the spring of 2020 when the pandemic first hit” said the NAHB chairman.

The NAHB chief economist said it pretty succinctly as a bottom line here, “Tighter monetary policy from the Federal Reserve and persistently elevated construction costs have brought on a housing recession.” Remember, that housing all in is about 15-18% of the US economy historically.

Big Acquisition!
American Pacific Mining Corp and Constantine Metal Resources Ltd. announce that they have entered into a definitive agreement pursuant to which APM will acquire all of the issued and outstanding common shares of Constantine in an all-share transaction.

Premier Exploration & Development Company
The combined company will be a premier exploration and development company in the western USA with two projects being aggressively advanced under strategic partnerships with well-respected major metal producers and an expanded portfolio of prospective precious and base metals assets.

Highlights of the Transaction and Strategic Rationale:

Both CEOs Comment On The Powerhouse Merger
CEO of American Pacific Mining, Warwick Smith, stated: “This is a transformational step for American Pacific as the Palmer Project gives us an established PEA-stage asset with a tremendous amount of exploration upside. We are very impressed with the quality of technical work completed by Constantine and Dowa to-date and look forward to collaborating with our new partners and stakeholders to expand resources and realize the full potential of this high-grade VMS system while continuing to deliver exposure to progress and new discoveries across our existing portfolio of highly prospective past-producing exploration projects.”

CEO of Constantine Metal Resources, Garfield MacVeigh, commented: “Constantine is pleased to enter into this agreement and our Board unanimously recommends the transaction to shareholders at a significant market premium. We believe American Pacific’s focus, financing capabilities and breadth of exploration experience in the US will result in Palmer reaching its full potential. We would like to thank our shareholders, the team at Constantine, our Board and our joint venture partner at Palmer, Dowa, for all their support.” American Pacific Mining, symbol USGD in Canada and USGDF in the US. To learn more about the opportunity this powerhouse merger creates CLICK HERE.

As Major Cracks Appear In The Financial System, It’s Everyone, Every Currency And Every Central Bank For Itself