With the next global crisis rapidly approaching, this is why the price of gold will be launched into the stratosphere.

Systematic Over-Indebtedness & Inflation
By Ronald-Peter Stoeferle, Incrementum AG Liechtenstein
June 20 (King World News) –The goal of every organism, every human being, and every bureaucracy is to maximize his chances of survival. To this extent, deflation constitutes an existential threat to the current monetary system that needs to be fought at all costs. To gloss over the inherent instability of the credit system, the existing credit deflation will be compensated by extremely expansive central bank policies. We think this is a tightrope walk…

The central banks try to fine-tune this tightrope walk between deflation and inflation. The following chart shows the annual growth rates of central bank balance sheets since 2003. Evidently the Bank of Japan has been pursuing a relatively restive central bank policy. The ECB, too, has been relatively restrictive with an annual inflation rate of “only” 27%. The People’s Bank of China holds the title as inflation world champion, closely followed by the Swiss central bank and the Federal Reserve. By comparison, the stock of gold has only been growing by an annual 1.48%. This underlines the relative scarcity of gold in comparison with fiat currencies that can be inflated at will.

King World News note:  The chart below illustrates why the Western-led price suppression scheme in the gold market is so incredibly important to central banks.  When the price of gold is eventually unleashed, fiat currencies across the globe will collapse accordingly. 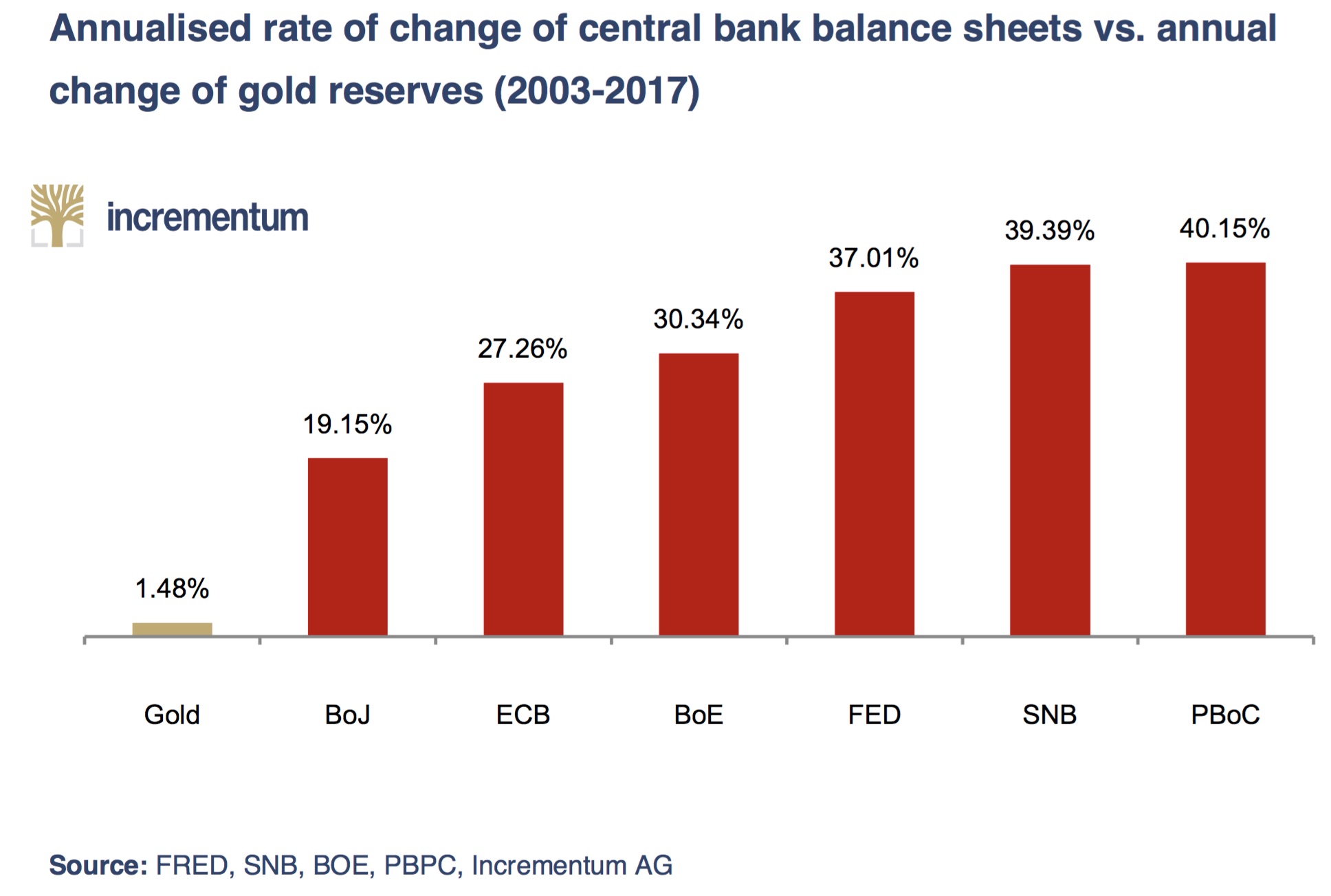 According to our esteemed colleagues at Flossbach von Storch, the central bank money supply in the Eurozone, Japan, the UK, and Switzerland alone is currently growing at 16 times the pace of global gold production. Some 800 tonnes of gold are produced every quarter, which amounts to $33 billion. In comparison with the creation of money, this seems almost ridiculously low: in Q4 2016, the most active central banks bought $545 billion worth of securities, which was a new record level.

Now let us look at the development of the inflationary tendencies, which are crucial for the gold price. Rising rates of inflation generally translate into a positive environment for the gold price, whereas falling rates (i.e. disinflation) represent a negative environment – as is also illustrated by the following chart. From late summer 2011 to mid-2015, price inflation was clearly recessive; since then, it has been on the rise. In the short run, the base effect of inflation should now be subsiding again. From our point of view, a continued rise in inflation would require rising commodity prices, particularly a stronger oil price. 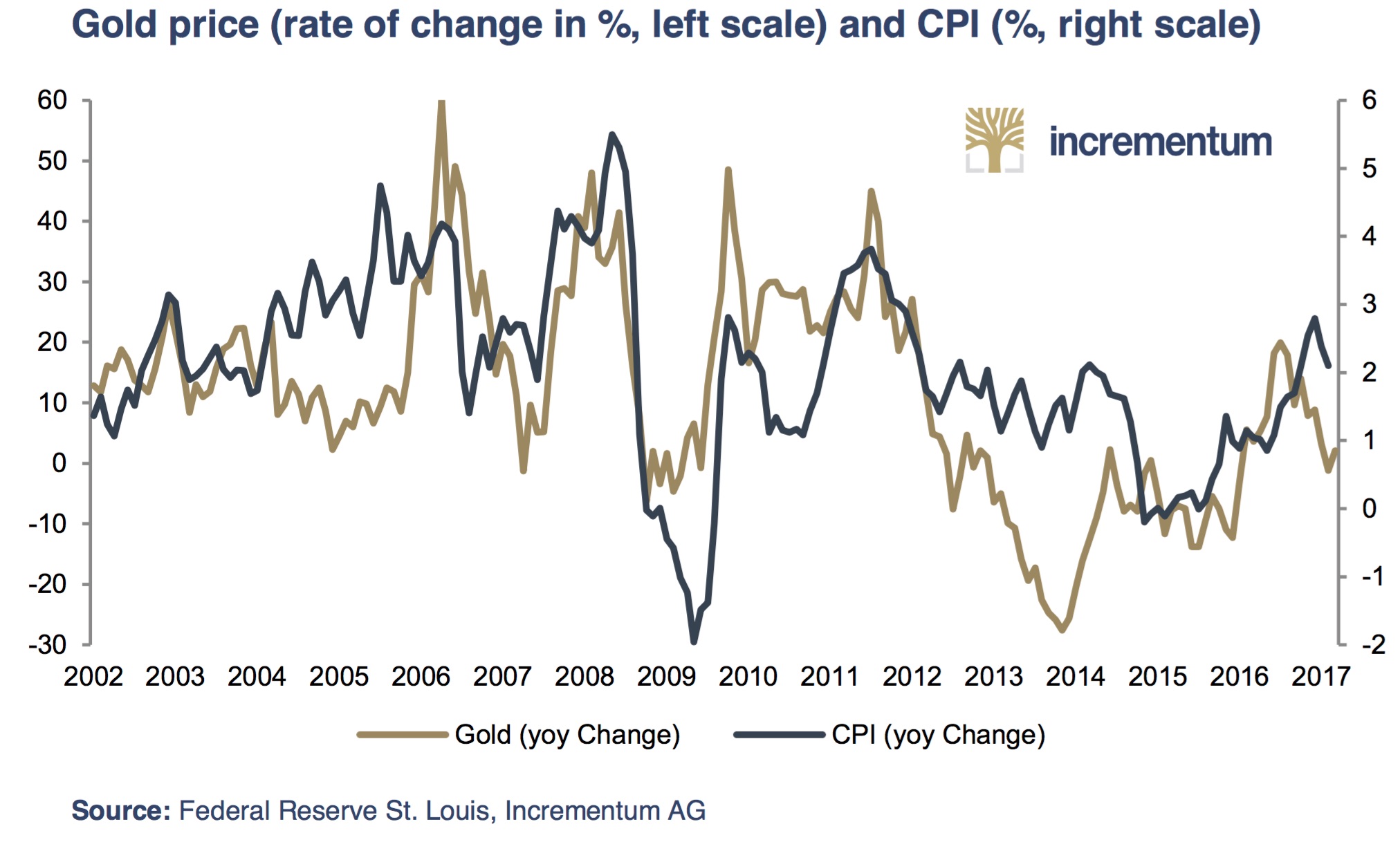 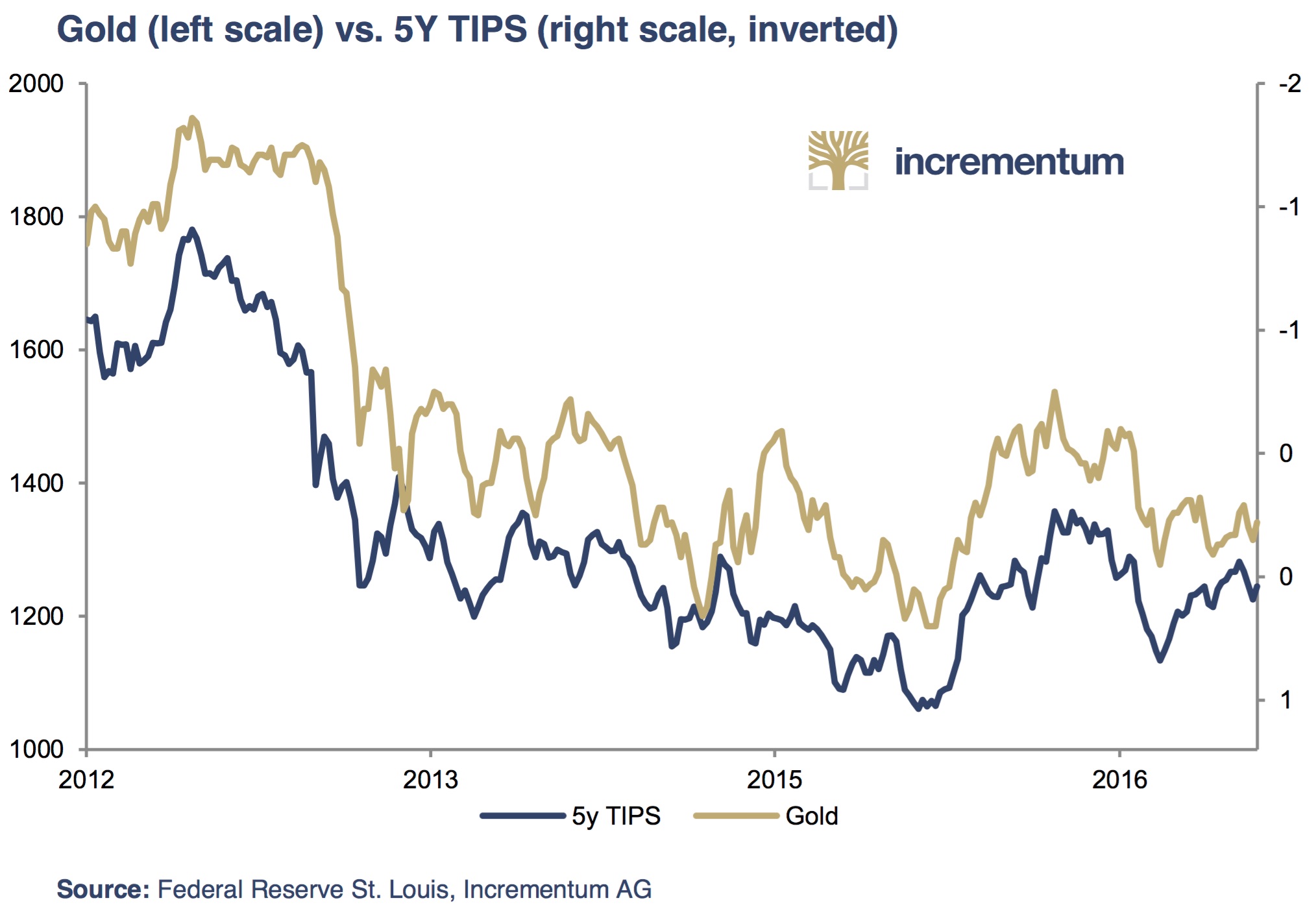 The inflation rate currently priced in by US bonds currently also signals falling demand for inflation protection. Since the beginning of the year, worries about inflation have been on a gradual decline. PCE core inflation, the indicator favored by the Fed, has recently fallen to 1.56%. This does make it hard for the Fed to keep raising rates beyond June. And this does not even consider a possible “hot autumn” 2017, which might bring along economic risks.

As far as the willingness to take risk by investors is concerned, we find the ratio of the Pro Shares Ultra Gold (UGL), i.e. the gold ETF leveraged by a factor of 2x, and the GLD, which illustrates the development of gold 1:1, highly interesting. A rising ratio means that investors are becoming more aggressive and are funneling more of their capital into the leveraged ETF. The chart illustrates the fact that a double-bottom has formed, which is also an indicator of a trend reversal (see chart below). 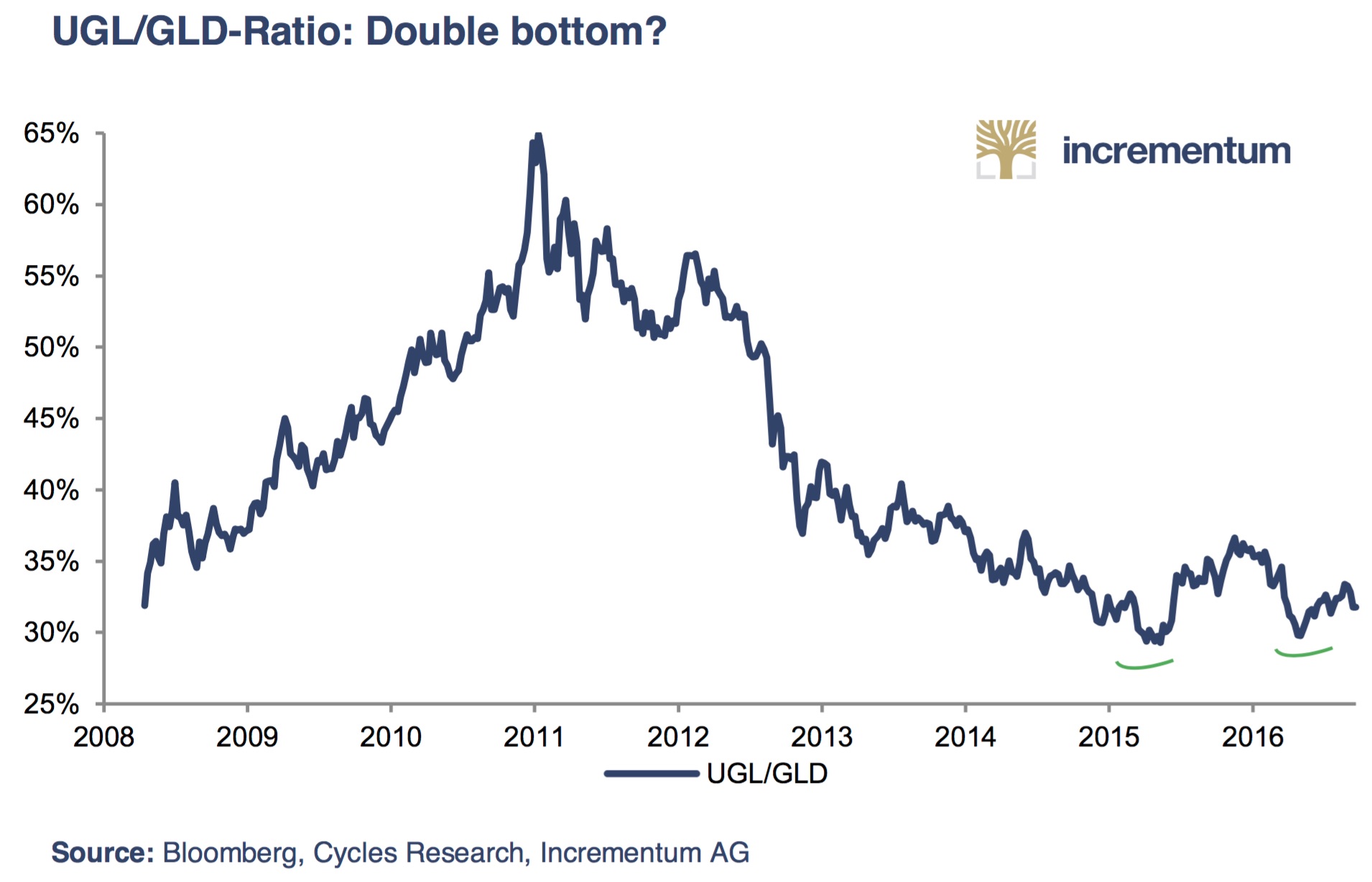 King World News note:  Assuming that the double-bottom on Incrementum’s chart above is correct, this means there will be tremendous upside in the gold market both intermediate- and longer-term.  This also means there will be enormous upside for the shares of high-quality mining companies as well.

***ALSO JUST RELEASED: This Is What The Fed Is Hiding From The Public CLICK HERE.

Everything Falling Into Place For Gold & Silver, Just Take A Look At This…