Things To Keep An Eye On

After we move through the middle of the trading week, here are some things to keep an eye on…

Things To Keep An Eye On
While it should be no surprise that the rise in rates is taking the air out of a lot of previous high flying stocks with some down 30-75% from their highs (such as Paypal, Twitter, Snap, Chewey, Lyft, Palantir, Zoom, Teledoc, CRISPR, Virgin Galatic, Zillow, Clover, and Chegg to name a few), we’ve seen in the past few trading days weakness in credit. HYG, the high yield etf, yesterday closed at the lowest level since March 2021. 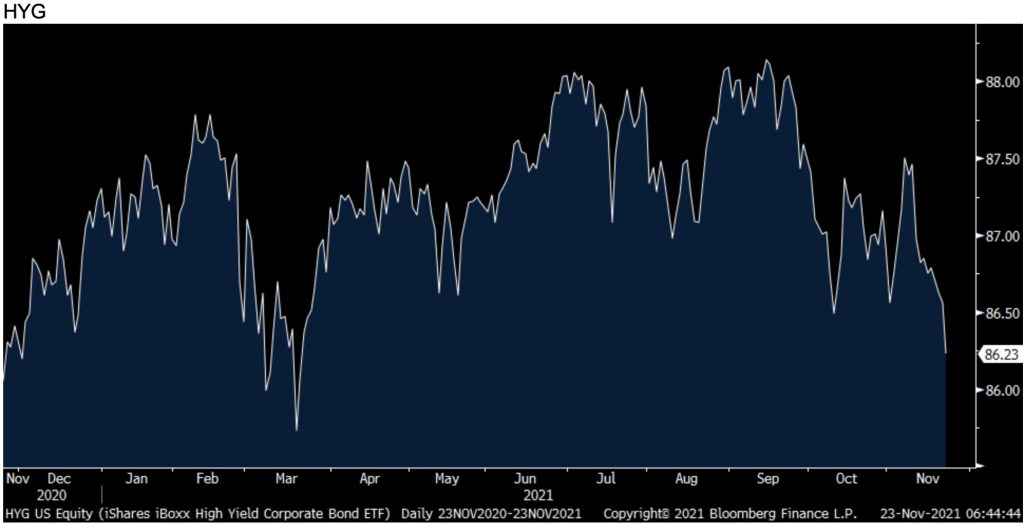 The yield on the Barclays CCC high yield to worst is at 7%, the highest since January 2021 while its spread to treasuries is at the most since March 2021. 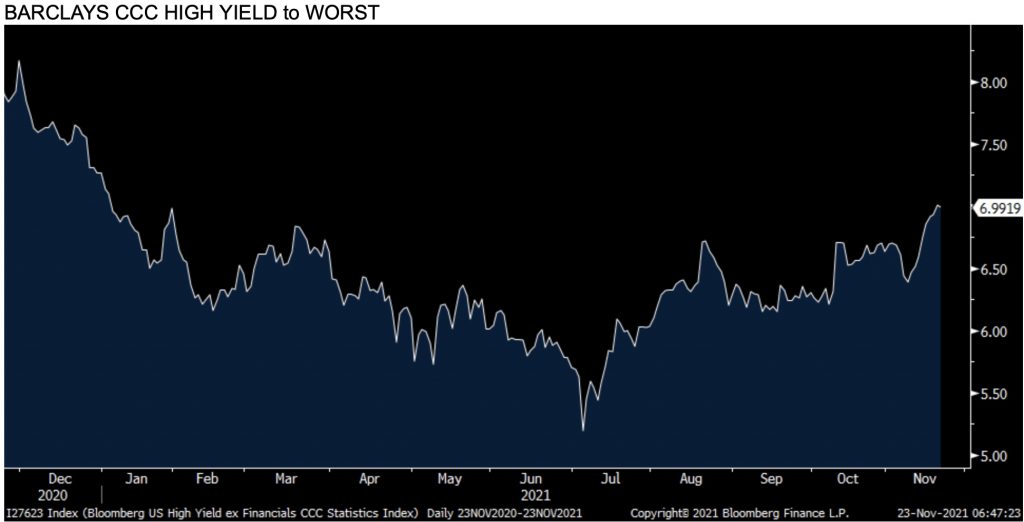 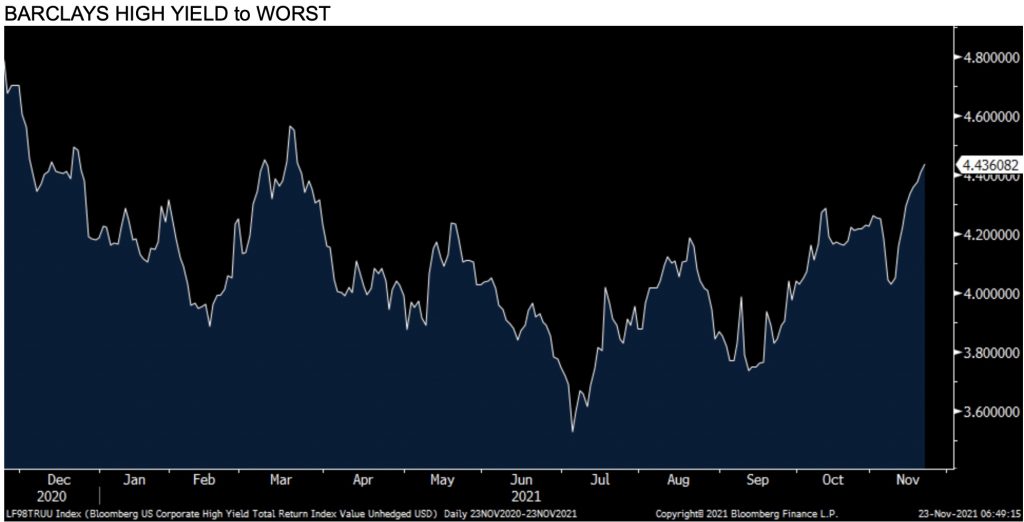 European bonds are down across the board, both in sympathy with the US treasury selloff yesterday but also after some less dovish (I’m not going to say more hawkish yet for the ECB) commentary from ECB members. The head of the Bank of France Francois Villeroy yesterday said “From today’s perspective, we should end PEPP net purchases in March 2022.”

“The risks to inflation are skewed to the upside. It’s plausible to assume that inflation is going to drop below our target of 2% in the medium term. However, there could be structural shifts pointing in the other direction, I don’t think we can truly tell, on the basis of today’s data, what is actually going to happen.”

A Governing Council member Klass Knot said today that he doesn’t think some of the Covid shutdowns “will have an impact on our intention to wind down the pandemic emergency purchase program.” While the PEPP will likely end in March 2022 from the perspective of growing its size, they will still be reinvesting. The euro is up a hair after the recent weakness the past few weeks…

The November Eurozone manufacturing and services composite index rose to 55.8 from 54.2 and that was better than the estimate of 53 with most of the gain in services. The caveat though is business optimism about the future fell to the lowest since January. Markit hit on all the themes we are fully aware of:

“The manufacturing sector remains hamstrung by supply delays, restricting production growth to one of the lowest rates seen since the 1st lockdowns of 2020. The service sector’s improved performance may meanwhile prove frustratingly short lived if new virus fighting restrictions need to be imposed. The travel and recreation sector has already seen growth deteriorate sharply since the summer.”

With respect to prices, “With supply delays remaining close to record highs and energy prices spiking higher, upward pressure on prices has meanwhile intensified far above anything previously witnessed by the surveys.”

The UK composite index was little changed with manufacturing slightly up but offset by a .5 pt drop in services. Manufacturing continues to deal “with supply shortages and falling exports.” The jobs market improved. On pricing, “A record increase in firms’ costs will meanwhile further stoke fears that inflation will soon breach 5%, with lingering near record supply delays adding to indications that price pressures may show few signs of abating in the near term.” I don’t see how the BoE doesn’t hike rates in December. The UK 2 yr gilt yield is up 4.6 bps after rising by 4.4 bps yesterday.

The Australian manufacturing and services index from Markit rose to 55 from 52.1 with services adding the most as Covid restrictions were further eased. The problem though remains, “supply chain issues featured strongly…as delivery times lengthened, widespread shortages were reported and price increases continued to be seen.” After the US treasury selloff, the Australian 10 yr yield jumped by 7.5 bps to 1.87%, a 3 week high. The Aussie$ though is unchanged as the dollar takes a breather after its recent run.

The Turkish lira is in absolute freefall, down a whopping 11% today vs the US dollar as Erdogan continues to defend his support for lower interest rates in the face of 20% inflation. His economic ignorance will eventually show him the door but that might not happen until the election in 2023 if there is not an early one called. 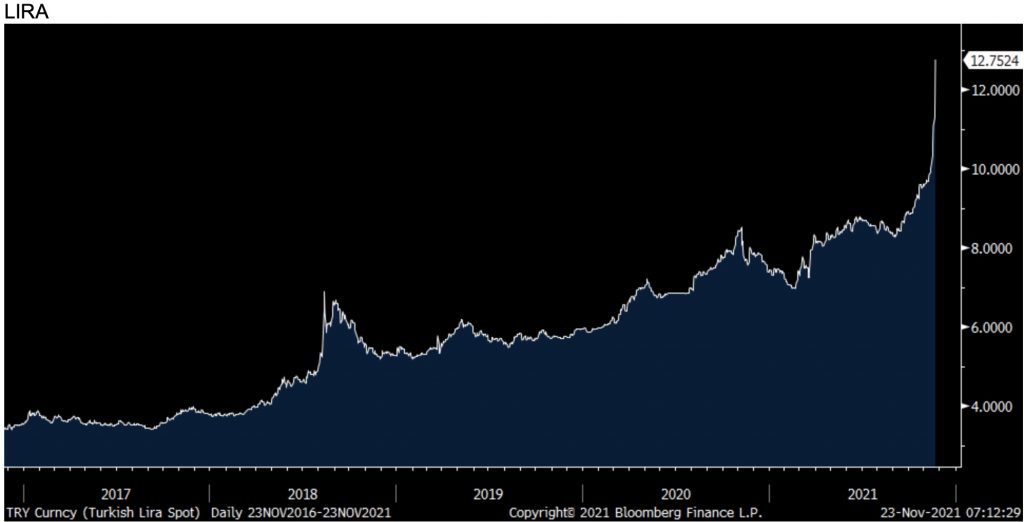