On the heels of another chaotic trading week in major markets, today one of the top economists in the world sent King World News an incredibly powerful piece warning that a full-blown global collapse is coming as historic market bubbles implode.  Below is the fantastic piece from Michael Pento.

The Thompson Reuters/Jefferies CRB Index (CRB) is now at 2008 panic lows. Those who think the CRB Index says nothing about global growth…invest accordingly at your own peril. 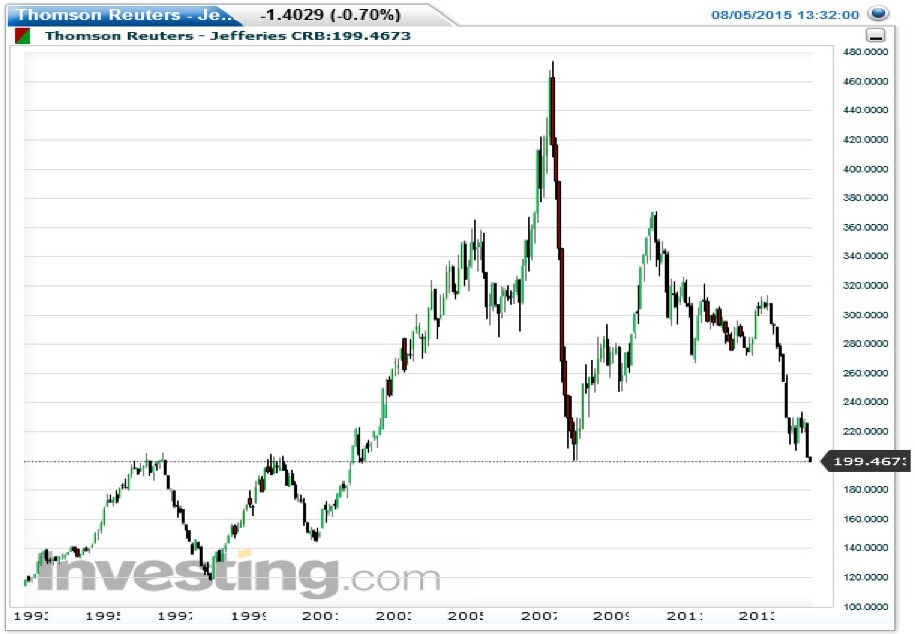 What The Commodity Crunch Is Really All About

And if you believe this commodity crunch is all about some temporary oil supply glut, think again. There are 19 commodities that make up the CRB Index:  Aluminum, Cocoa, Coffee, Copper, Corn, Cotton, Crude Oil, Gold, Heating Oil, Lean Hogs, Live Cattle, Natural Gas, Nickel, Orange Juice, Silver, Soybeans, Sugar, Unleaded Gas and Wheat. The plummeting value of the weighted average of these commodities is screaming one thing loudly: the rate of global growth is plummeting.

This is mainly because the synthetic economy of China, which once sucked up the natural resources of the globe in order to create the world’s greatest fixed asset bubble in history, is now in freefall. And it is driving down the price of commodities as global growth grinds to a halt.

For those who think the U.S. and the rest of the world will be somehow immune to a China slowdown should note that foreign sales accounts for about one third of aggregate revenue for the S&P 500. For years China had been a huge growth market for multi-national companies. However, its recent rut is affecting both domestic and international companies around the globe that once provided China with natural resources during its empty-city building bonanza.

Companies Reeling In The Aftermath Of China's Collapse

These companies and countries that benefitted from China’s success are now reeling from its collapse. For example; U.S. multinationals such as Caterpillar, Ford, GM, Tesla and Freeport McMoRan have been hurt by the slowdown in China, just to name a few. And then of course we have Apple, whose stock is down 14% in the past few weeks because investors are realizing Chinese consumers are not going to buy the volume of iWatches that have been predicted.

Strong demand from China had also been a boom to the Eurozone. Germany's auto industry, France and Italy’s luxury goods, Dutch and Finnish chemicals, were all beneficiaries from China’s huge growth. In fact, around 8% of Germany's exports go directly to China.

But now French auto components group Valeo is reviewing its growth plans in China due to slackening demand from car factories. Sweden's Volvo is also reducing growth expectations in the region and issued a warning to investors that it would have to take a 650 million Swedish Crown ($75 million) charge for expected credit losses. VW sales in China fell by 0.5 % in the first half of the year, as growth in the Chinese auto market turned negative in June.

And expanding credit risks are prompting some Western banks to rethink their exposure to China. Swiss-based UBS AG has stopped lending money to onshore clients in the communist nation.

But perhaps we see the largest effect of China in the Asia-Pacific region. China’s three major trading partners — Taiwan, Korea and Malaysia — have seen a significant slowdown. For instance, Taiwan Q2 GDP growth of just 0.64% was the weakest in the past three years.

Australia is known as “China’s quarry” and had enjoyed a decade-long boom selling iron ore. BHP Billiton and Rio Tinto have spent billions of dollars to double iron ore production over the past five years to meet China’s insatiable demand. But now the good times appear to be over. Australia’s July PMI dropped to a 5-month low of 50. While the Markit PMI plunged to 47.8, which was the worst in two years.

And to prove that China’s slowdown spans the entire globe we can also evidence South America. Brazil is one of the 10 largest markets in the world; producing steel, cement, petroleum, lubricants, propane gas, and a wide range of petrochemicals. Brazil was also a huge beneficiary of the Chinese real estate bubble.

But Brazil's government recently lowered the country's growth output from a small gain to a contraction of 1.5%. Standard & Poor's has downgraded Brazil's debt outlook to "negative" from "stable," a signal they are preparing to drop its credit rating, which now sits just one notch above junk. Brazil’s currency, the real, is the weakest in 12 years against the dollar and the stock market is at a 6-year low.

And this slowdown in South America is also being felt worldwide. Agribusiness multi-national Bunge said its edible oil business was lower due to lower margins and volumes in Brazil. Owens Illinois, one of the world's biggest makers of glass bottles, reported a drop in volume stemming from a sharp drop in beer sales in Brazil. Goodyear Tire reported that sales in Latin America were down 20% compared to last year. Industrial gas manufacturer Praxair also suffered a sales decline year-over-year due to weaker industrial activity in Brazil and China. Whirlpool, which gets 16% of its revenues from Brazil, said sales were down 22 percent year-over-year. And finally, Caterpillar is getting crushed from the commodities rout and reported sales in Latin America were down 26%.

Given the huge global economic risk China and all its related trading partners present you would imagine the Fed would have this looming global recession firmly on their radar. Yet just recently Atlanta Fed President Dennis Lockhart said he feels confident the economy is ready for a rate hike. After all, when has the Fed ever gotten any economic prediction wrong?

It’s important to understand that in its history, the Fed has never undergone a “one and done” rate hiking campaign. In fact, the current median dot plot from the FOMC assumes a 1.5% Fed funds rate at the end of 2016. Therefore, after the first rate hike takes place, it would be natural to assume the Fed will hold true to its avowed trajectory, unless and until the U.S. economy falls into a recession. 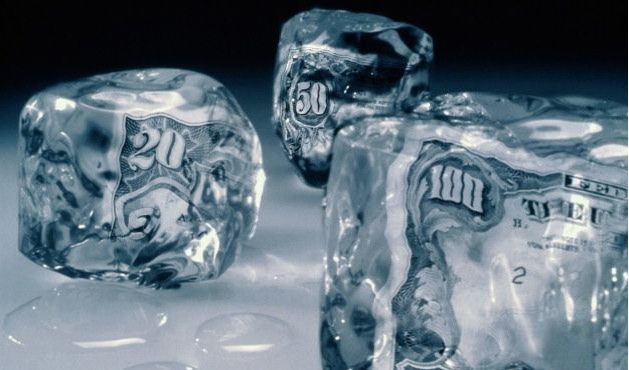 However, with the U.S. economy barely growing at 1.5% for the first half of 2015, it won’t take much more of a slowdown to bring growth into negative territory. Nevertheless, the Fed’s intentions are to slowly hike rates. But central bankers don’t realize the dystopias they have created: $200 trillion worth of debt disabled and asset bubble ridden economies that have become totally addicted to money printing to avoid a deflationary collapse. Once the artificial support is removed, these bubbles will pop and begin to crater. Therefore, it shouldn’t take long before the Fed inverts the yield curve and money supply growth gets choked off. When that happens the economy will be in the middle of a 2008-variety collapse.

U.S. GDP has averaged just 2% for the past five years, yet the effects of slowing global growth have not yet been fully felt. But what is clear is that the CRB index is giving a clear message of what lies ahead.

Still, U.S. stock values are near record nominal highs and are outlandishly valued in relation to GDP. For those who claim that we are an island economy and don't care if the rest of the world falls apart, I’d like to know what will happen to U.S. multi-national companies' earnings as global trade evaporates and the Fed sends the U.S. dollar even higher.

According to FactSet, Q2 S&P 500 revenue growth is already at a negative 3.3% and earnings declined by 1.3%. Into this malaise we will have to add cascading global growth and a Fed that seems committed to commencing an interest rate hiking cycle. With the U.S. averages at such lofty levels it seems prudent to heed the warning declared by cratering commodity prices. If you doubt that conclusion just recall how wise it was not to ignore the same commodity message broadcast to investors during the summer of 2008. ***KWN has now released the incredible audio interview with the top trends forecaster in the world, Gerald Celente, where he discusses his prediction for a global stock market crash and panic in 2015, as well as giving the KWN listeners a peak at the just released Summer Trends Journal, and you can listen to it by CLICKING HERE OR ON THE IMAGE BELOW.

ALERT: One Shock After Another Will Create The Biggest Collapse Ever In World Financial Markets In 2017