LEGEND STEVEN DEAN DISCUSSES THE DIRE SITUATION FACING THE WORLD MONETARY SYSTEM AND WHAT THIS MEANS FOR INVESTORS IN GOLD, SILVER, MINERS AND MAJOR MARKETS! 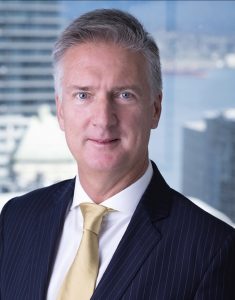 Steven Dean: Chairman, Chief Executive Officer & Director of Artemis Gold Inc. – Steven Dean is a Fellow of the Australian Institute of Mining and Metallurgy, a Member of the Canadian Institute of Mining, Metallurgy and Petroleum, and a Fellow of the Institute of Chartered Accountants of Australia. He has extensive experience internationally in mining, including as President of Teck Cominco Limited (now Teck Resources Ltd.). Prior to joining Teck, Mr. Dean was a founding member of management of the Normandy Poseidon Group, (which became Normandy Mining) a co-founder of PacMin Mining Corporation which became a subsidiary of Teck Corporation in 1999. He was also a co-founder and former Chairman of Amerigo Resources Ltd. More recently, Mr. Dean was Chairman, CEO and founder of Atlantic Gold Corporation, focused on gold exploration, development and production in Nova Scotia, which was sold to St. Barbara Limited in 2019 for $802 million after building its Moose River Consolidated Mine on time and on budget and operating at the lowest decile cost profile in the gold sector.

Mr. Dean is a recipient of the Viola R. MacMillan Award from the Prospectors and Developers Association of Canada (PDAC) for individuals demonstrating leadership in management and financing for the exploration and development of mineral resources. He is Chairman and Chief Executive Officer of Artemis Gold Inc. (TSX-V: ARTG), Chairman of Oceanic Iron Ore Corp. (TSX-V: FEO), Director of Velocity Minerals Ltd. (TSX-V: VLC) and Director of St Barbara Limited (ASX: SBM). 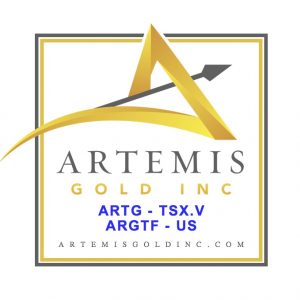 Artemis Gold Inc. is a well-financed gold development company with a technically driven approach to shareholder value creation through identifying, acquiring and developing gold projects in mining friendly jurisdictions using a disciplined staged approach to development, managing risks while minimizing cost of capital to optimize economics and returns for shareholders.

Artemis respects the rights and interests of Indigenous nations. The company is committed to building relationships based on trust, respect and integrity, and to unlocking the value of its assets in a way that benefits the Indigenous nations and communities where we operate.

Management have strong shareholder alignment as the largest owners of the company, and have a recent track record of delivering a +1,129% return on investment to the shareholders of Atlantic Gold Corporation over a 4.5-year period from its inception until it was acquired in 2019.

The primary focus for Artemis today is on advancing to construction the Blackwater Gold Project in central BC, Canada, a project with 10+ million ounces of gold in resources, Environmental Assessment approval and the potential to develop into one of the largest gold mines in Canada with cash costs in the lower quartile of global producers.

Artemis trades on the TSX-V under the symbol “ARTG”. 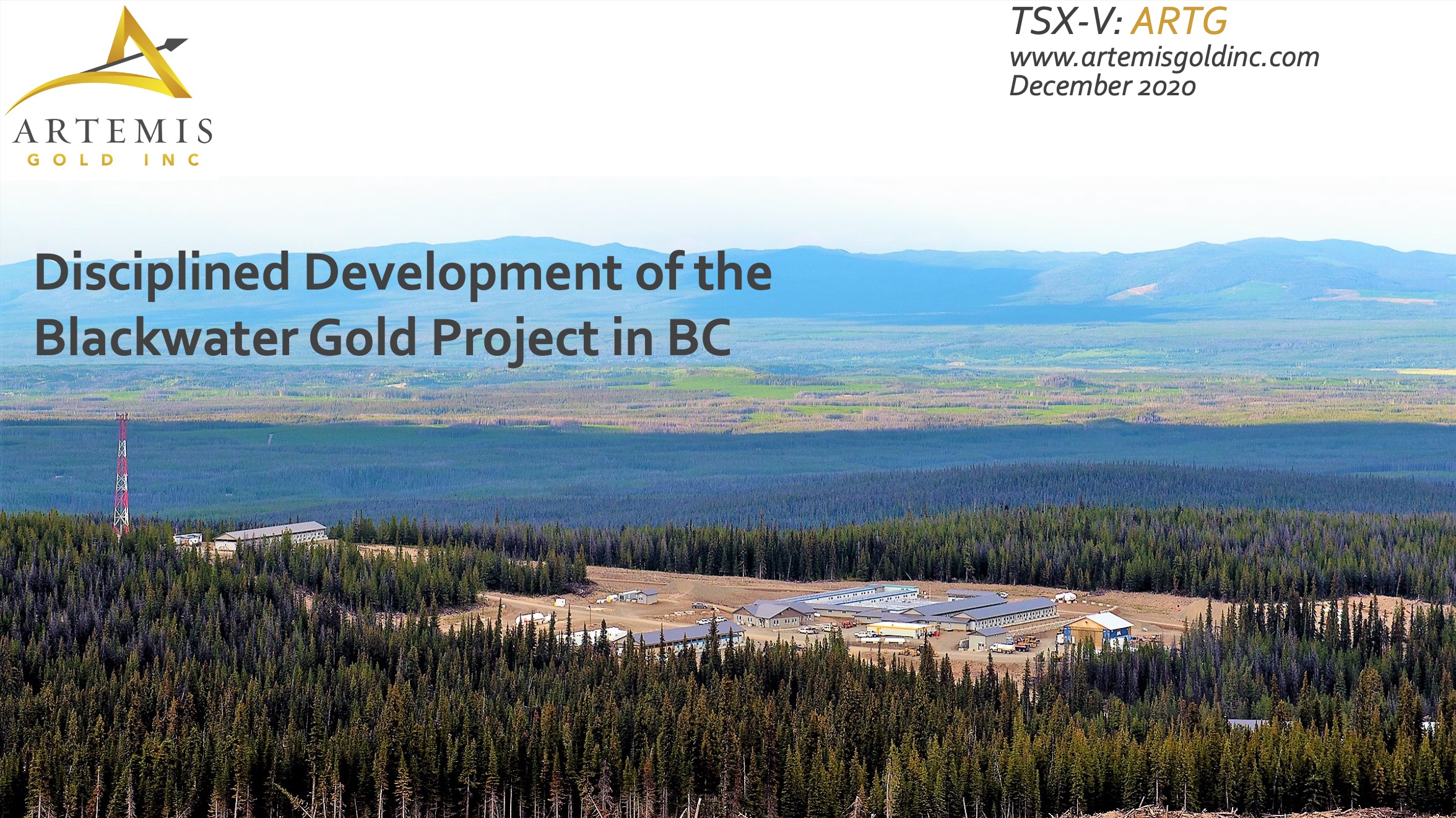 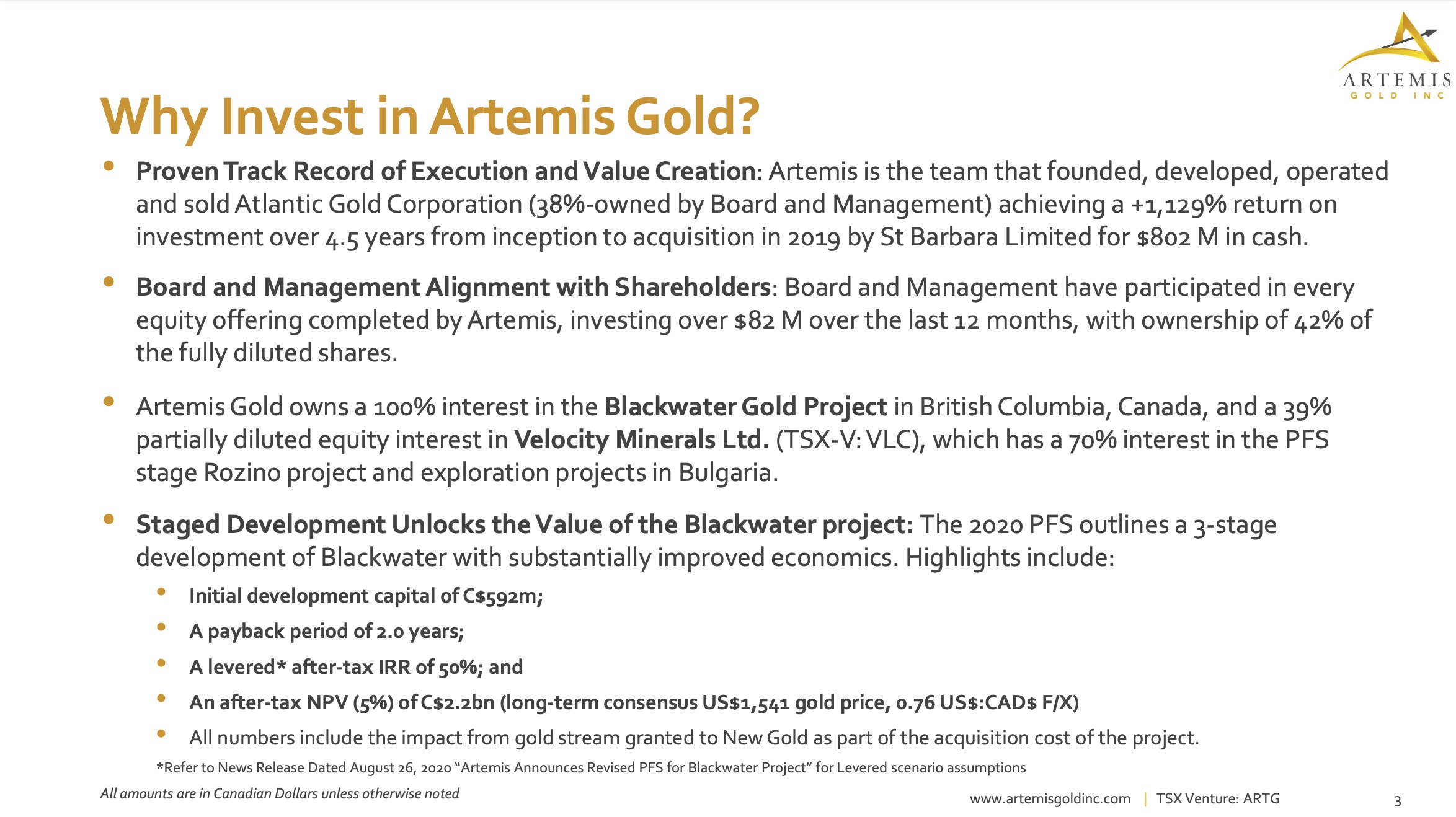 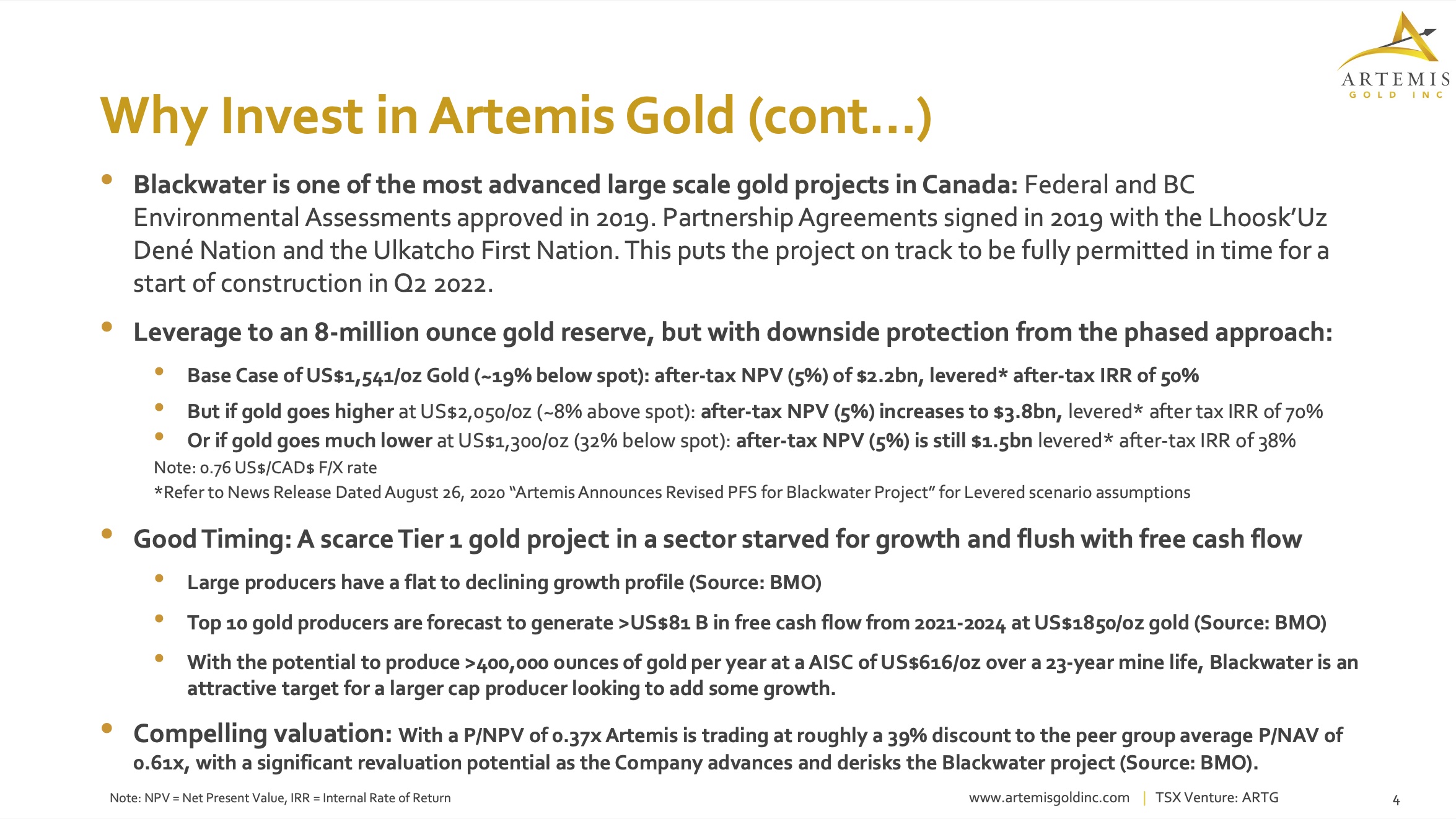 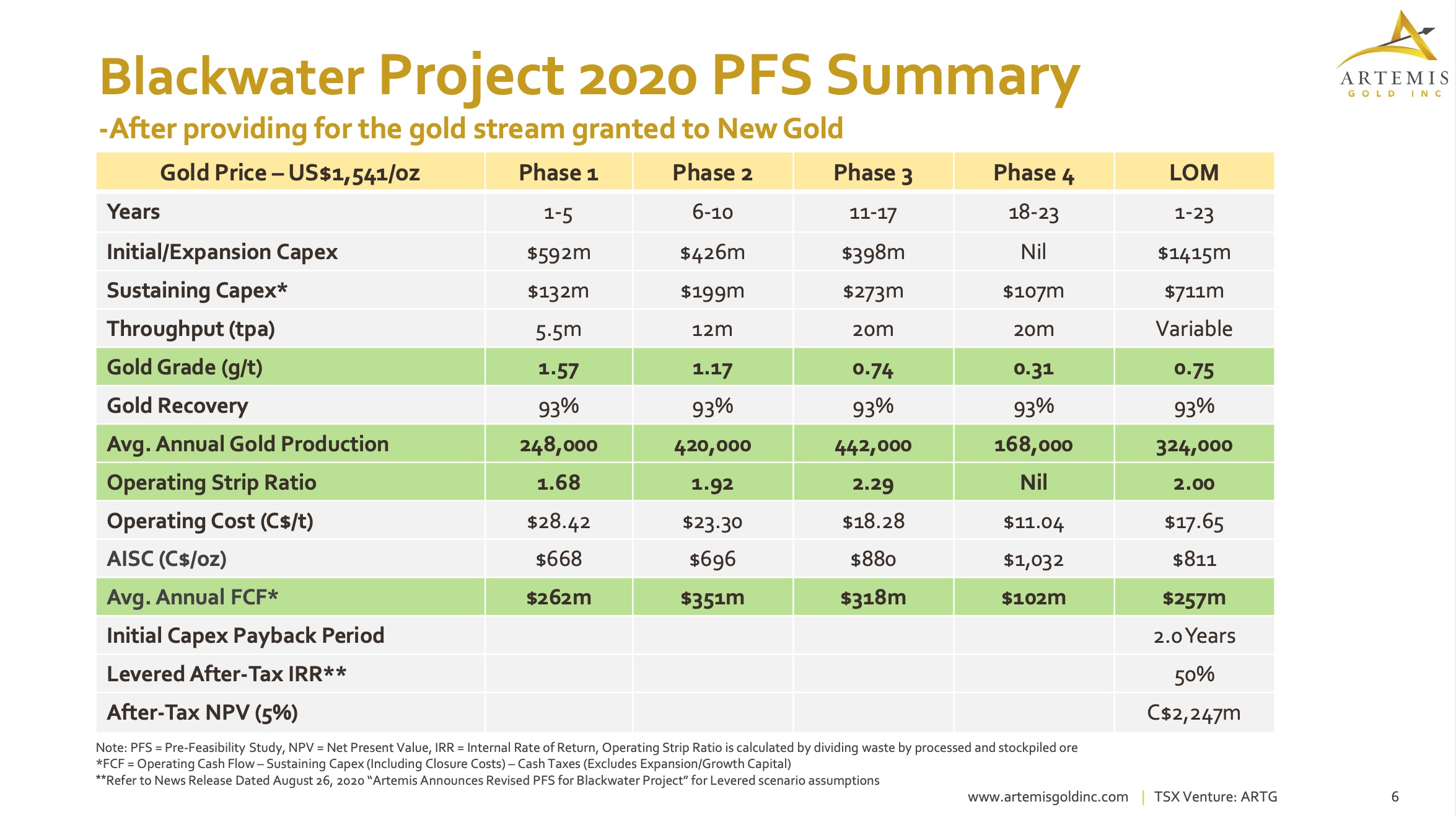 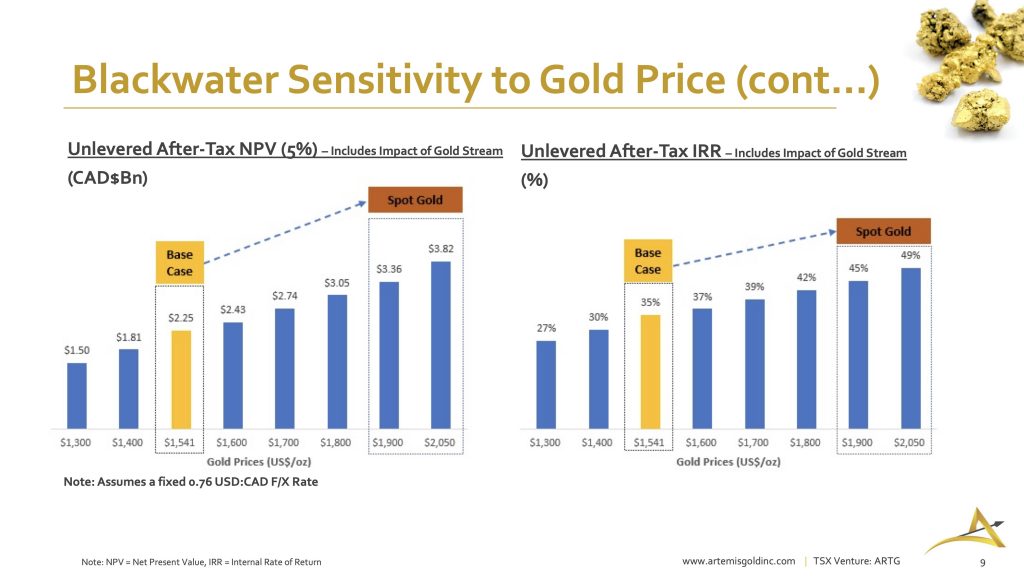 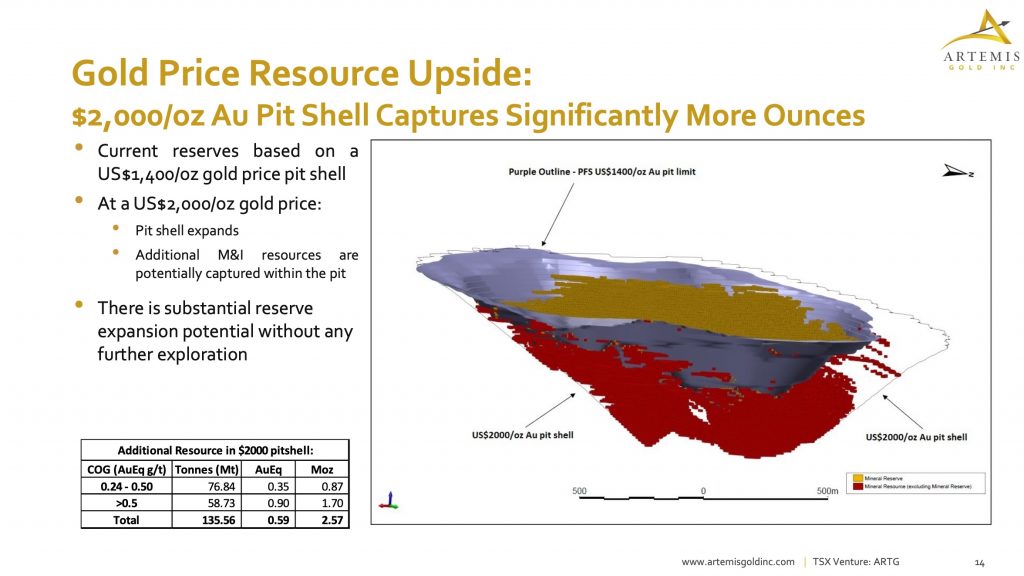 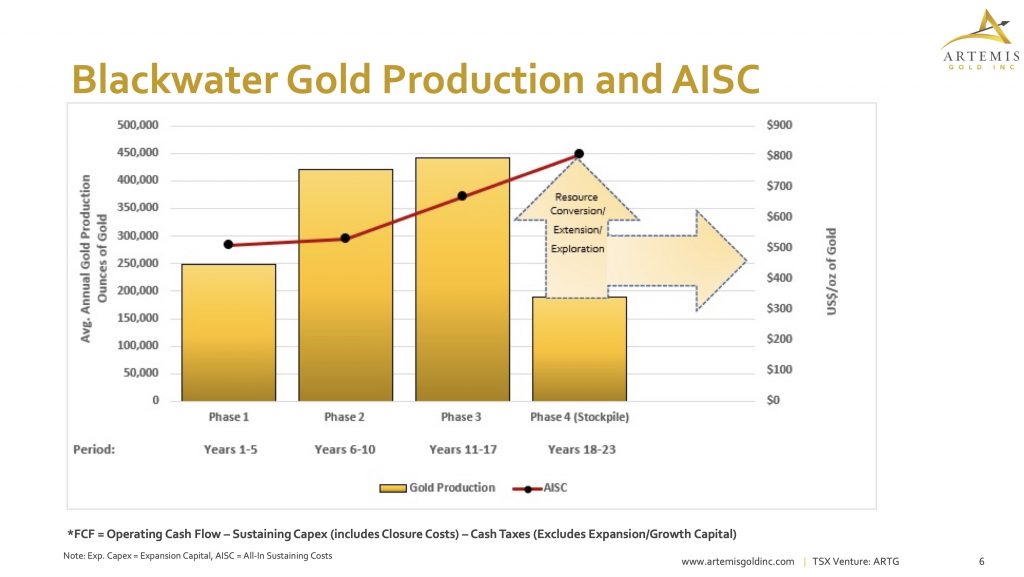 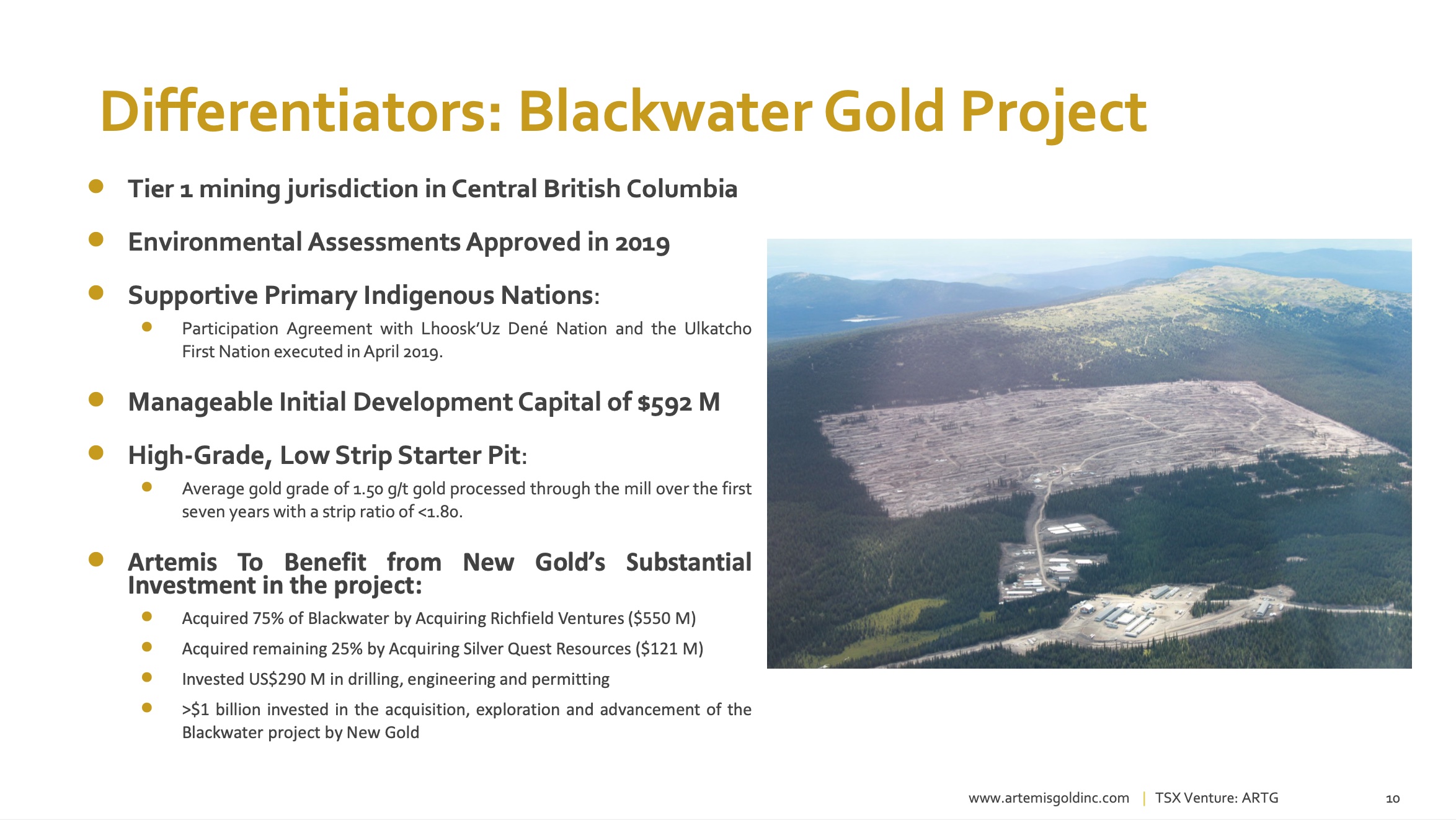 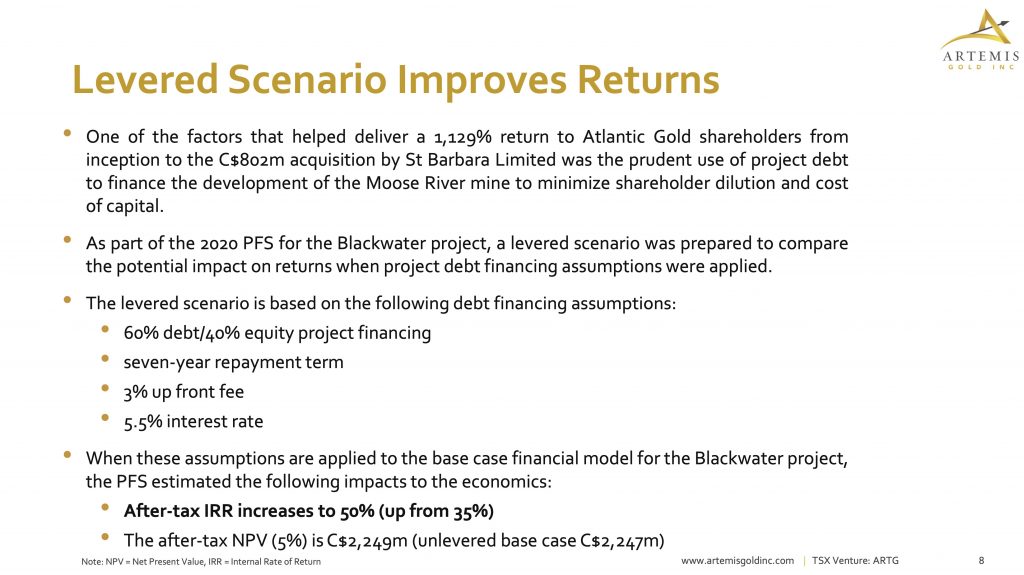 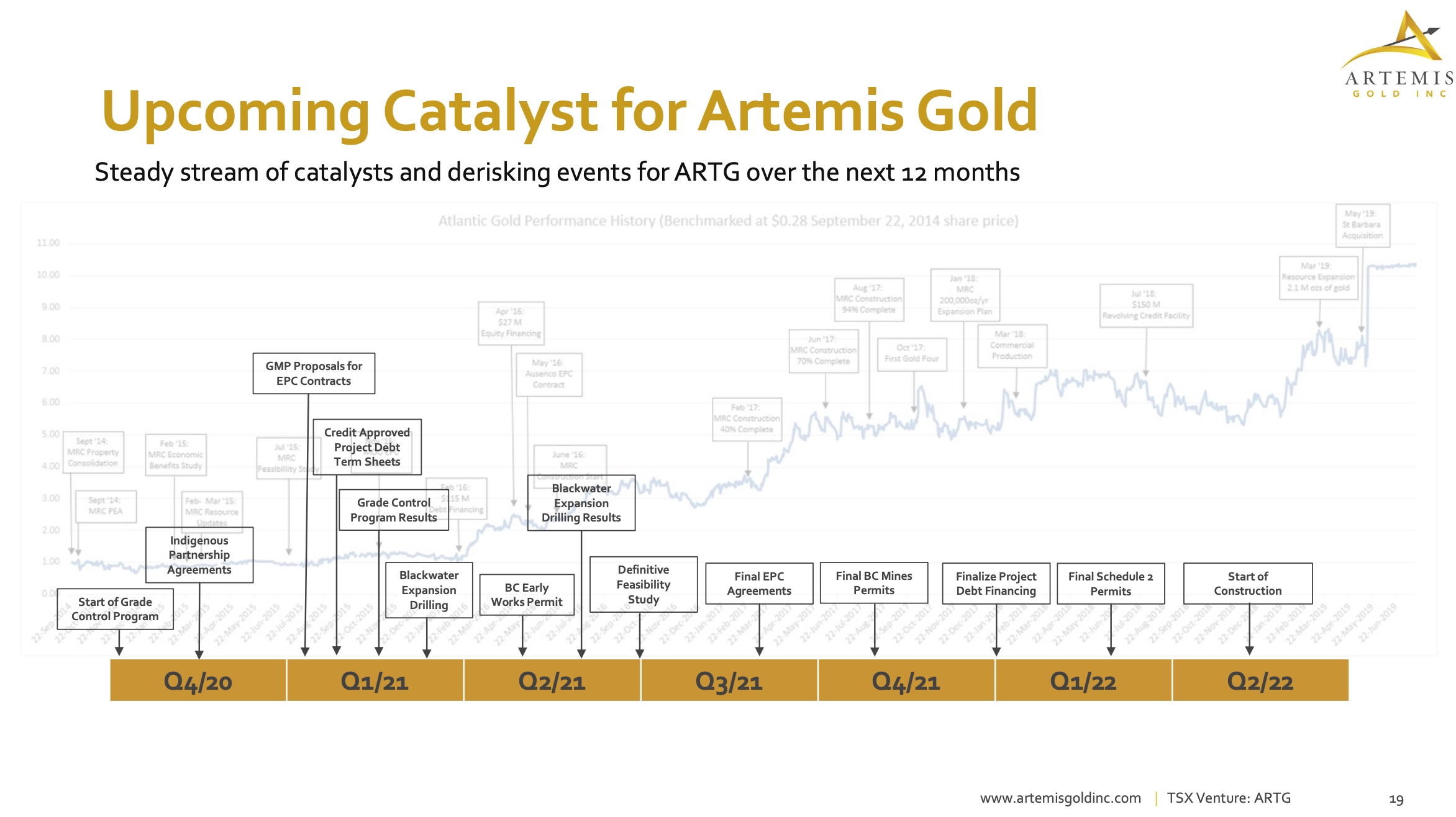 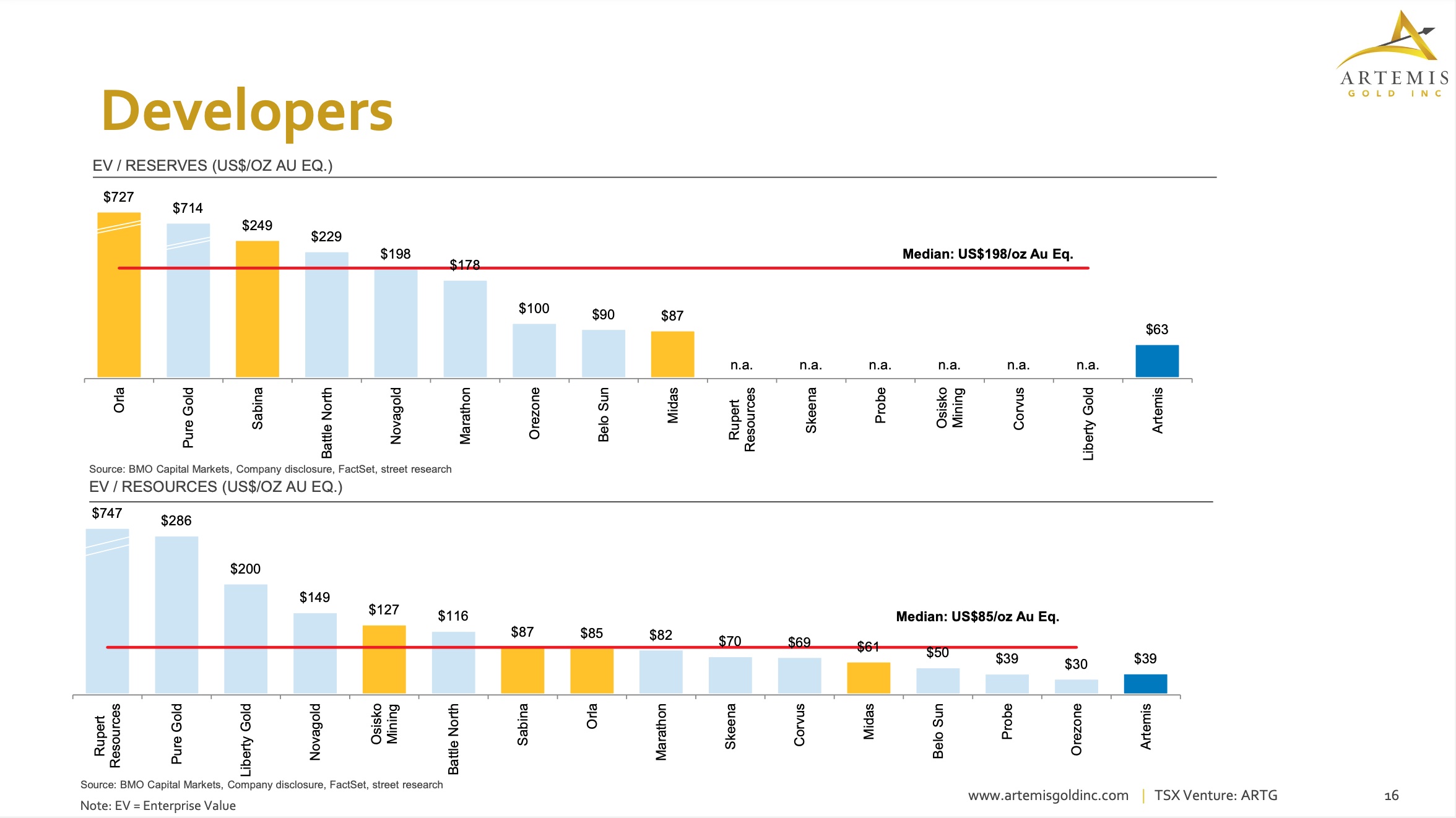 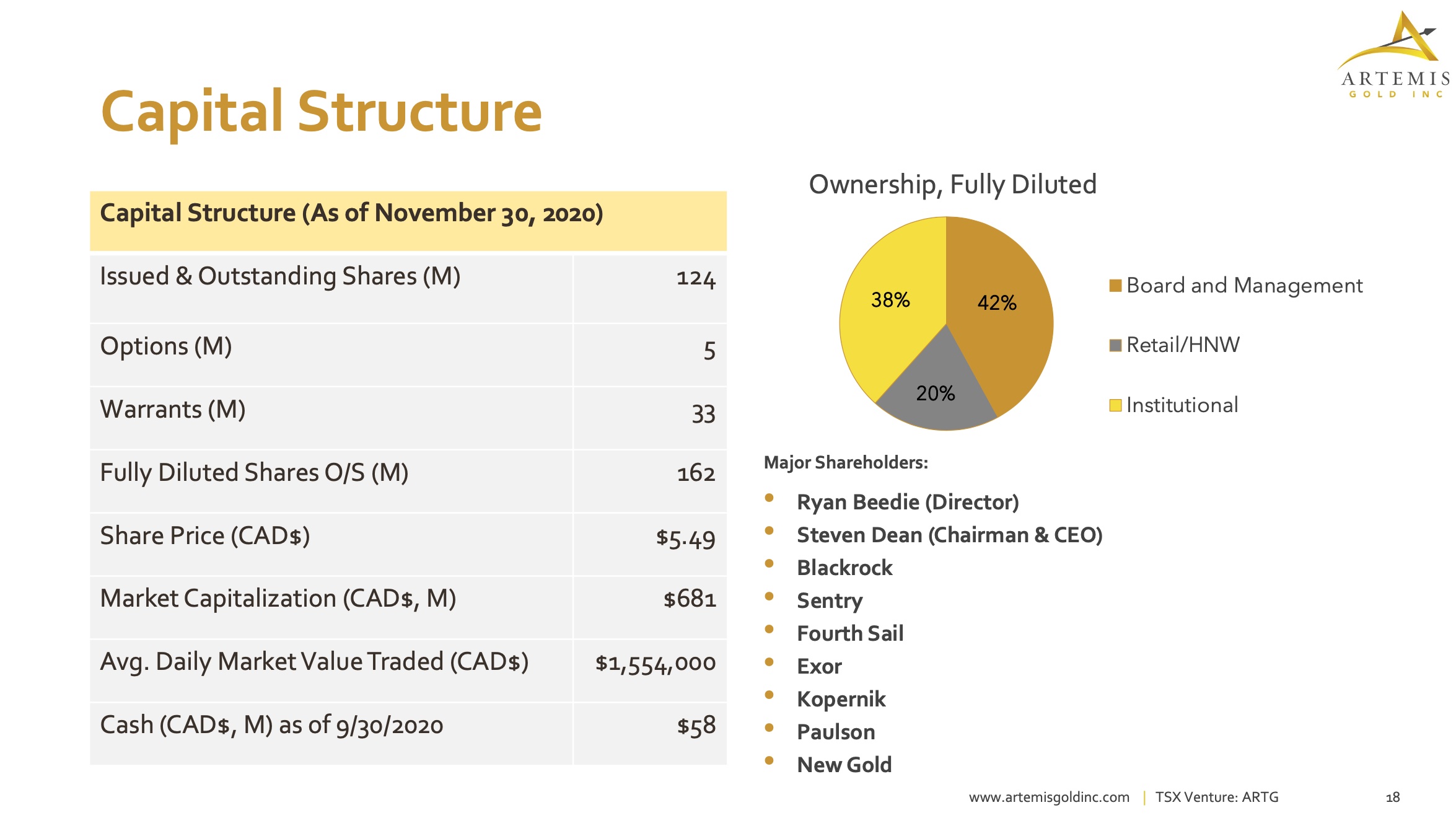 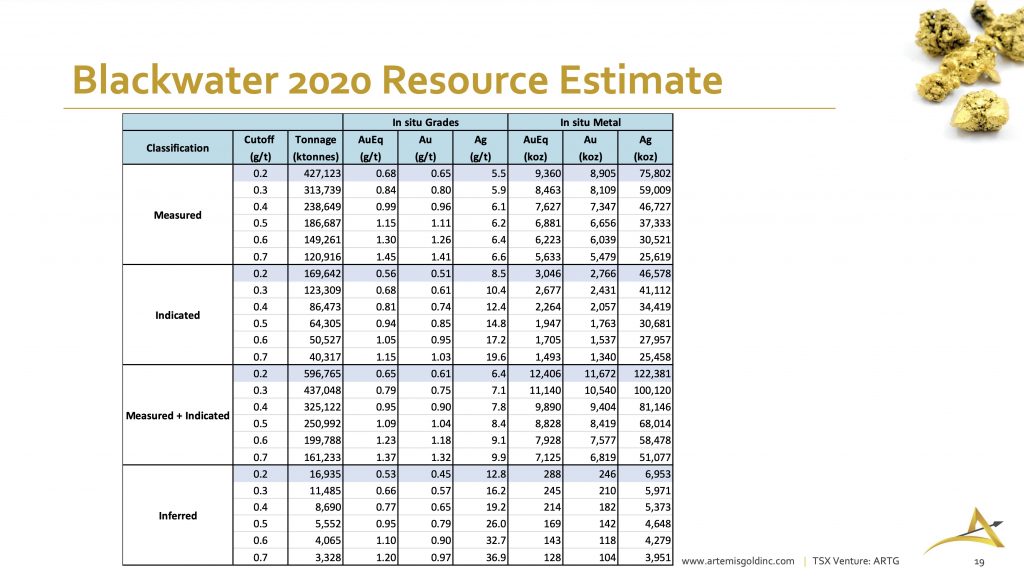 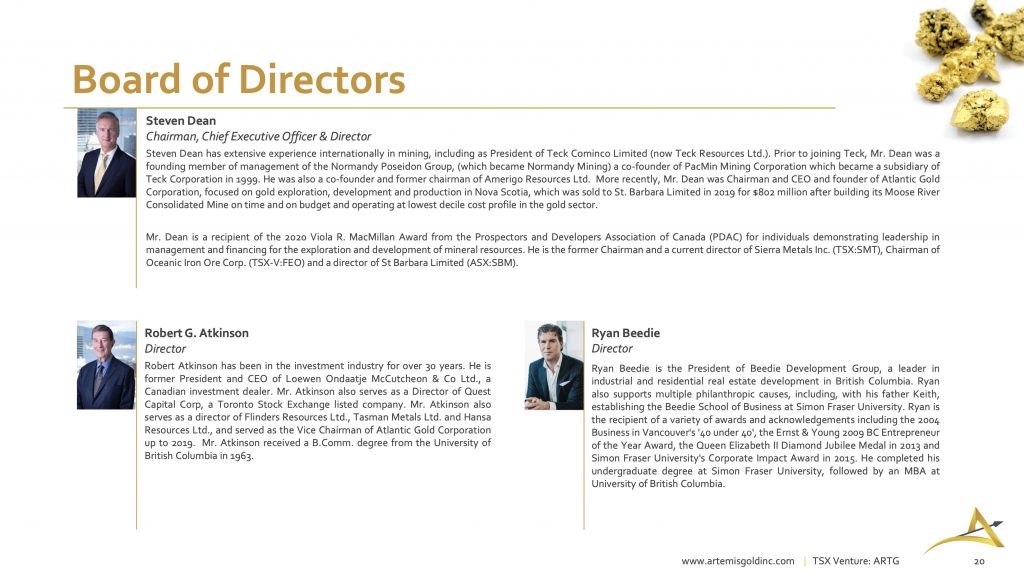 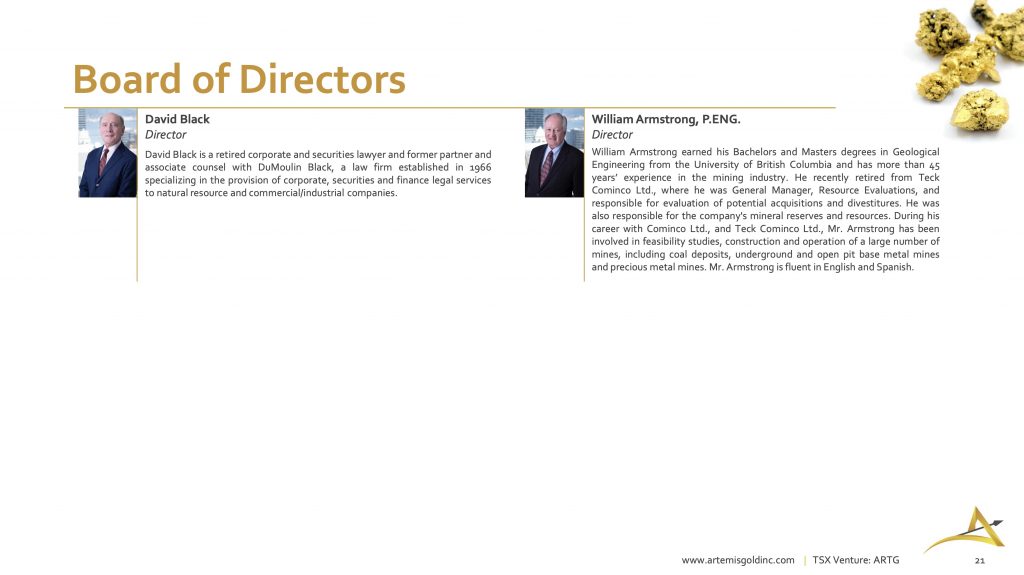 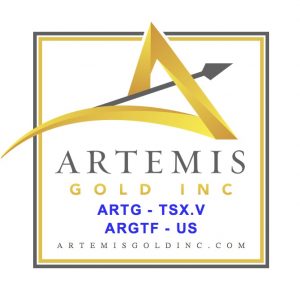