With the S&P 500 and NASDAQ hitting all-time highs and the Dow trading well above 28,000, Schwab’s top strategist just issued this major warning on the stock market.

August 24 (King World News) – Liz Ann Sonders, Chief Investment Strategist at Charles Schwab:  The stock market rally off the March 23 low is now “officially” a new bull market, courtesy of the S&P 500 having hit a new all-time high. It was the fastest recovery in history to a new high following a decline of at least 30% historically (the S&P was down 34% from February 19 to March 23; also the fastest move in history from an all-time high to bear market territory). The table below highlights all round trips for the S&P 500 in its history; along with their length, depth and recovery statistics. 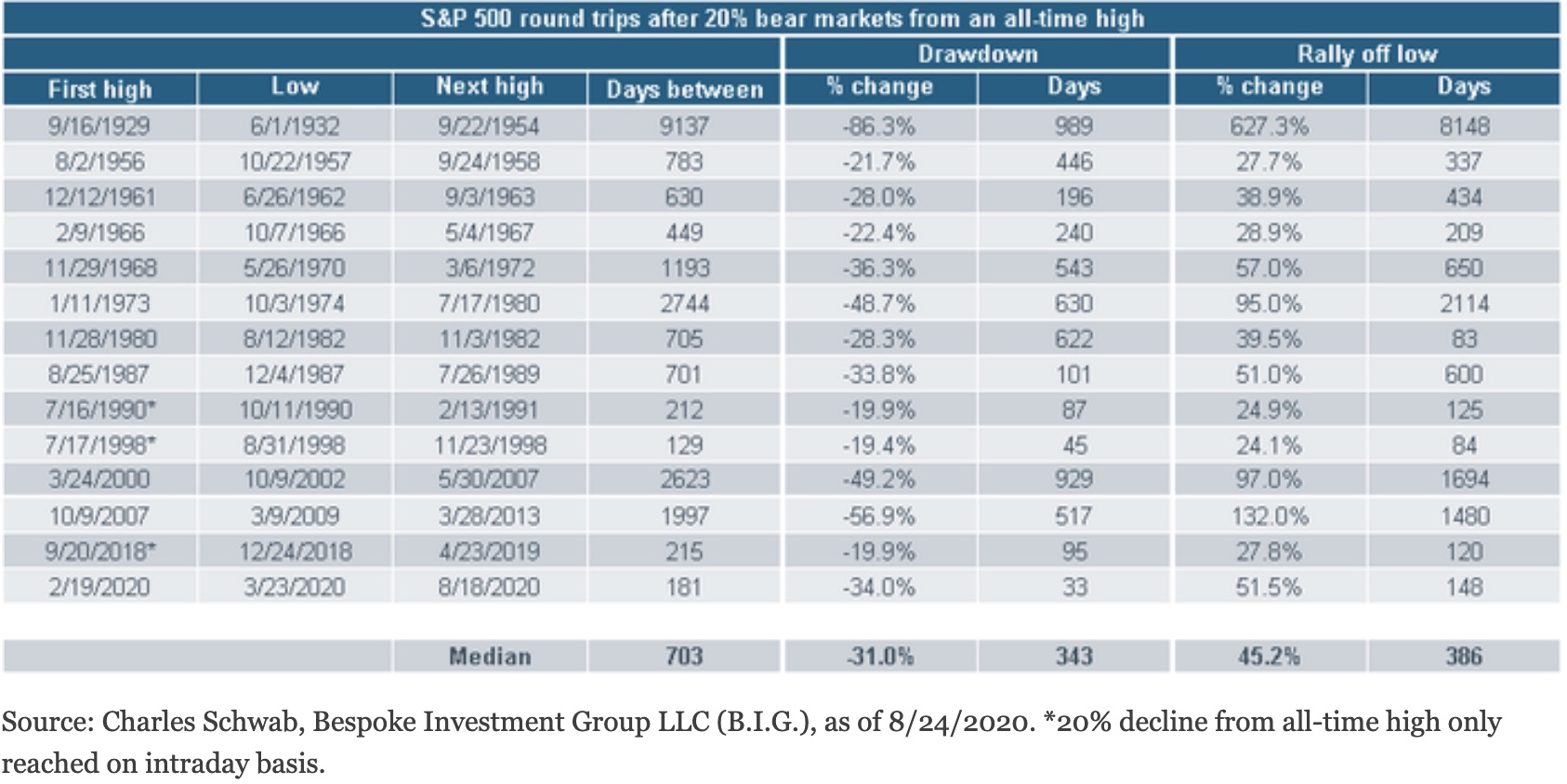 Big tech not just tech
“Big tech” (how they’re generically compartmentalized) has been a powerful force. Rightly so, the dominance of the five largest stocks in the S&P 500 have received much investor attention (and buying pressure). In equal-weighted terms, they represent 1% of the S&P 500; but in cap-weighted terms, they now represent nearly their own quartile, as you can see in the chart below. Interestingly though, only two of them (Apple and Microsoft) are Technology stocks. Two of them (Google/Alphabet and Facebook) are Communication Services stocks, and one of them (Amazon) is a Consumer Discretionary stock. In fact, it’s actually the Consumer Discretionary sector that has the best performance since the March 23 low; with Technology a close second.

Top 5 Nearing Their Own Quartile

This cycle’s dominance by the top five stocks is outsized relative to past cycles. Following the past three major bear market lows, the five largest stocks did not perform as well as they have today, as you can see in the chart below.

The dominance by a small subset of stocks has also lifted Growth and Momentum; and in the case of the latter, it’s a continuation of a near-half century trend. According to SP Global/S&P Dow Jones Indices, the S&P Momentum Index (launched in November 2014) has gained more than 4.5x the price return of the overall S&P 500 index.

The dominance by “big tech” has also created a wide gap between the S&P 500 and its mid- and small-cap companion indexes this year—the S&P MidCap 400 and the S&P SmallCap 600—which are -6.4% and -11.5%, respectively. Interestingly, the Technology sector has not just been stronger, but also less volatile relative to most other sectors. Tech currently represents 7% of the S&P 500 Low Volatility Index—a larger weight than either of the traditionally-defensive Real Estate and Utilities sectors according to SP Global.

Top heavy
But concentration has its risks as well; particularly with regard to the relatively weak breadth statistics accompanying the March new all-time highs. As you can see in the first two charts below, the percentage of S&P 500 stocks above their 50-day and 200-day moving averages have rolled over in conjunction with the overall index hitting a new high. In addition, less than 10% of the S&P 500’s members are trading at a new 52-week high, as you can see in the third chart below. 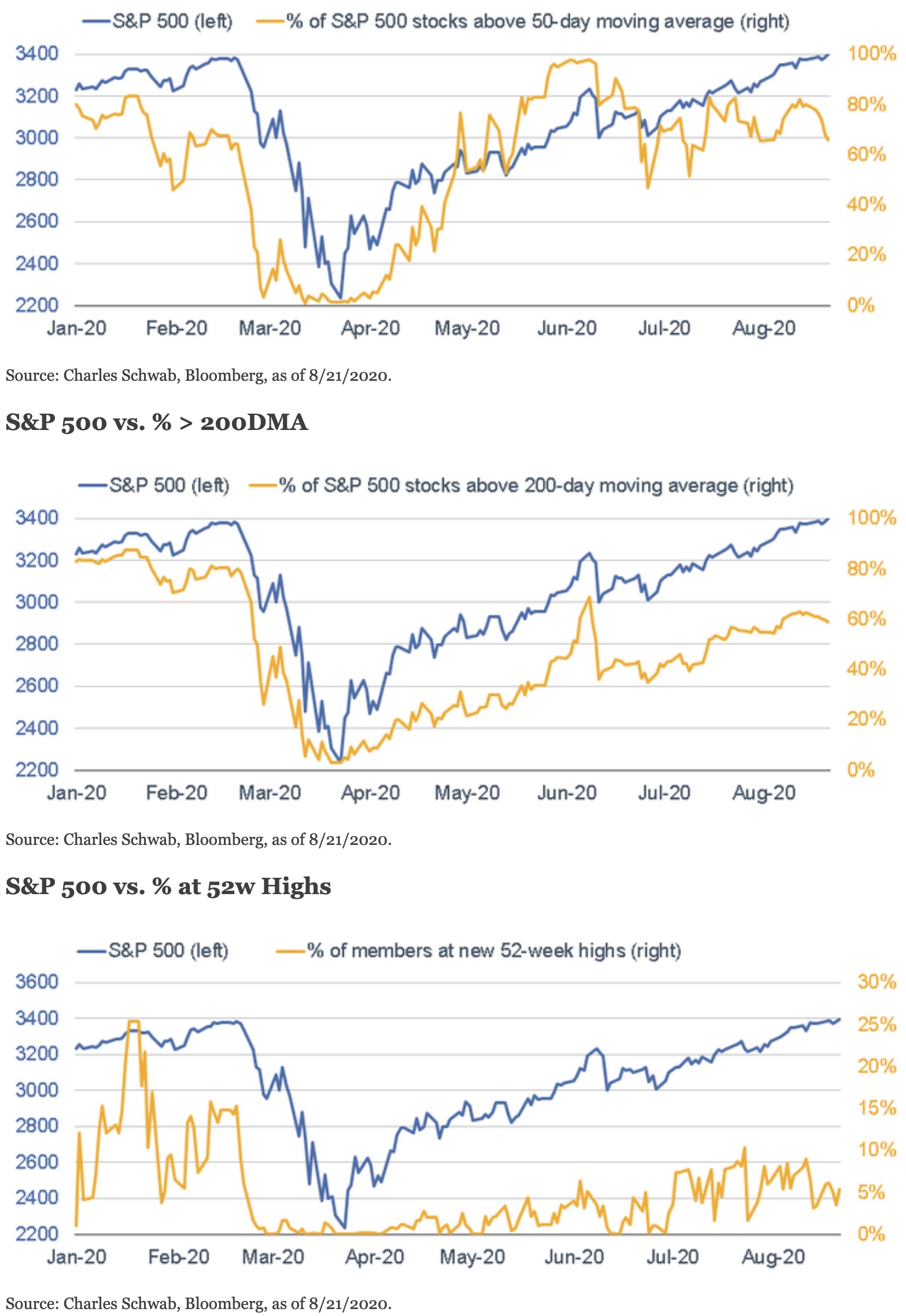 These divergences are not only characteristics of the S&P 500; but of the NASDAQ as well, as you can see below. In fact, there is an even smaller percentage of NASDAQ stocks trading at new 52-week highs. Last Friday was a particularly unique day relative to history; with the NASDAQ hitting a new 52-week high; but only 29% rising on the day—the lowest reading in history (at least back to 1984), according to SentimenTrader. By the way, the next-lowest day came last month; so it’s not a brand new phenomenon. 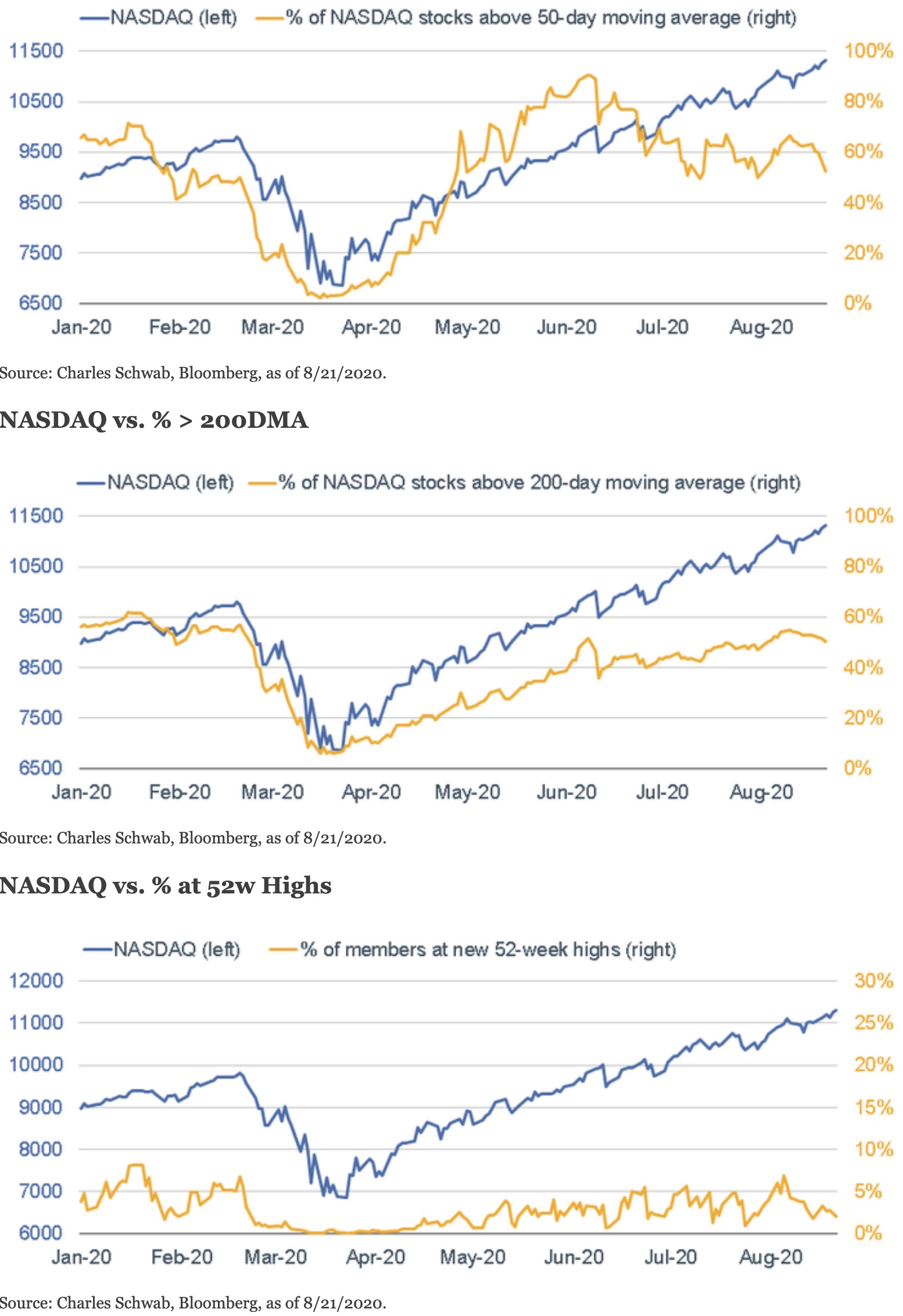 In the joint history of the S&P 500 and NASDAQ, there is no other five-month period when the S&P 500 was up more than 50% and the NASDAQ was up more than 65%. Whether these recent all-time highs will be followed with more of the same, represent “double-tops,” or something in between is yet to be seen. That said, it would be in keeping with history for at least some short-term consolidation—which could simply take the form of a rotation away from the concentrated leadership areas vs. something more sinister. Most historical studies of similar periods of concentration show a tendency for flat-to-lower stock prices short-term; but higher prices longer-term.

As it relates to the economic environment, the recent all-time high marked the fifth time in history when the S&P 500 hit an all-time high while the economy was still officially in a NBER-defined recession. The prior four times were in January 1961, July 1980, November 1982 and February 1991. In all four cases, the NBER declared the recession as having concluded within the subsequent month.

Irrationality vs. solvency
I worry about the signs of froth in the market and among some behavioral measures of investor sentiment; not to mention traditional valuation metrics that are historically-stretched. This is not an environment in which greed should dominate investment decisions; but instead one for discipline around diversification and periodic rebalancing. Momentum can power the stock market beyond fundamental supports; which is why John Maynard Kenyes’ view from the 1930s remains oft-quoted: “Markets can stay irrational longer then you can stay solvent.”

***To listen to one of the most powerful audio interviews of 2020 from David Tice, the man who advised people managing more than $2 trillion click here or on the image below.

GOLD BULL: Rome Is Burning And The Fed Is Trapped