With many global stock markets near record highs and the crude oil market struggling, many people are wondering if the there are reasons to worry about overvalued paper financial assets?  Well, the remarkable illustration belows reveals why there is trouble ahead for major markets.

Here is the latest Investors Intelligence report along with the all-important sentiment chart:  "Stocks gained more ground last week with the NASDAQ Comp and S&P Mid-Cap charts ending at new highs. The S&P 500 set a new closing record as averages moved away from 50-day MAs. Indicators also rallied but are not yet broadly overbought at their own prior top levels. The newsletters showed more optimism in noting the latest strength, a trend that is again becoming a worry. Conditions are bullish with risk increasing. Close attention to positions is needed.

With another advance the bulls reached 56.6%, up from 52.5% and 49.0% the prior two weeks. The bulls show a high for 2015. They also just exceeded 56% at three prior market peaks over the second half of last year. Bulls above 50% show elevated risk while +60% levels point to near fully invested outlooks that usually precede a major market top. In contrast the Oct 2014 market decline saw the bulls down to 35.3% and lower risk buying conditions were shown.

Also at an extreme for 2015 were the bears at 14.1%, down from 15.2% a week ago. That is close to their two late Nov lows below 14%. Some bearish advisors follow cycles and note the unusually long period without a major market decline. The bears have been unable to gain any traction for more than a year with a reading below 20% since Apr-14.

There were also fewer advisors projecting a correction outlook, to 29.3%, from 32.3% last issue. They also show the lowest count this year. There are a modest number of editors that are reluctant bulls. They shift to correction when indexes retreat and back to bullish when markets rally again. If more become convinced that a broad new up-move is underway it could signal markets are really near a top.

A new worry is signaled from the spread between the bulls and bears which rose to 42.5%. That is up nearly 10% from the two prior readings of 37.3% and 32.7%. The difference is also just above the 41.5% that ended December and below the 42.7% spread from mid-November. Both were trading tops so concerns increase. Differences over 30% are a worry and above 40% signal major caution. At the mid-Oct lows the spread was only 17.1% and favorable for accumulation in a rising stock environment. In Aug-2013 it was 13.4%. The bears haven't outnumbered bulls (a negative spread) since October 2011."

King World News note:  See the remarkable illustration below which shows the stock market bulls outnumber the bears by one of the largest totals in the past 5 years! 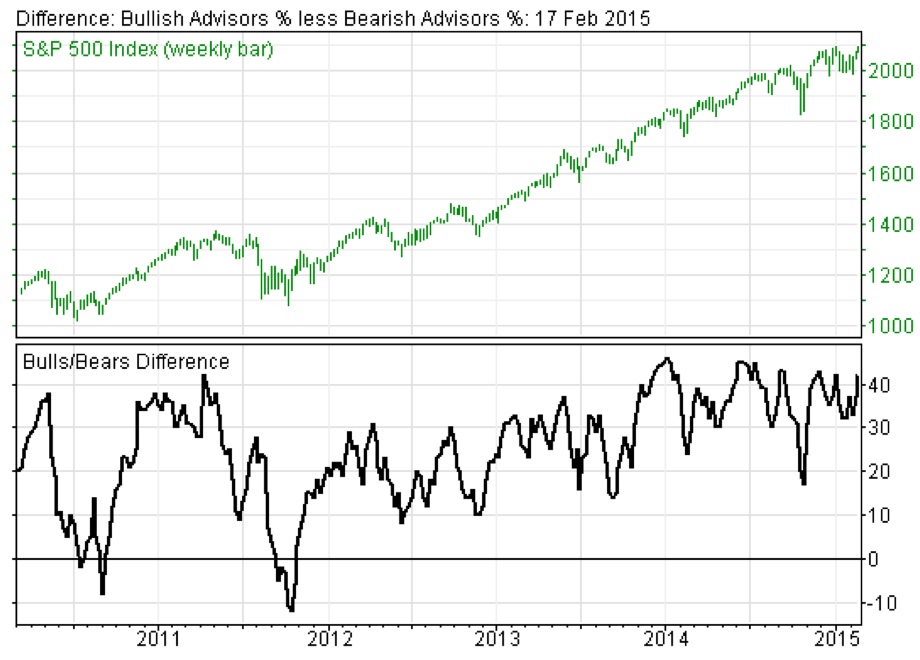 ***ALSO JUST RELEASED: Richard Russell – All Major Countries Are Now At War With One Another CLICK HERE.