Look At What Just Hit The Lowest Level In History

With the price of gold surging to $1,770, look at what just hit the lowest level in history.

Debt Burden
November 11 (King World News) – Charlie Bilello:  The Interest Expense on US Public Debt rose to $747 billion over the past year, a record high. At the current pace it will soon be the largest line item in the Federal budget, surpassing Social Security.

US Interest Expense Will Continue To Trend Higher With Interest Rates 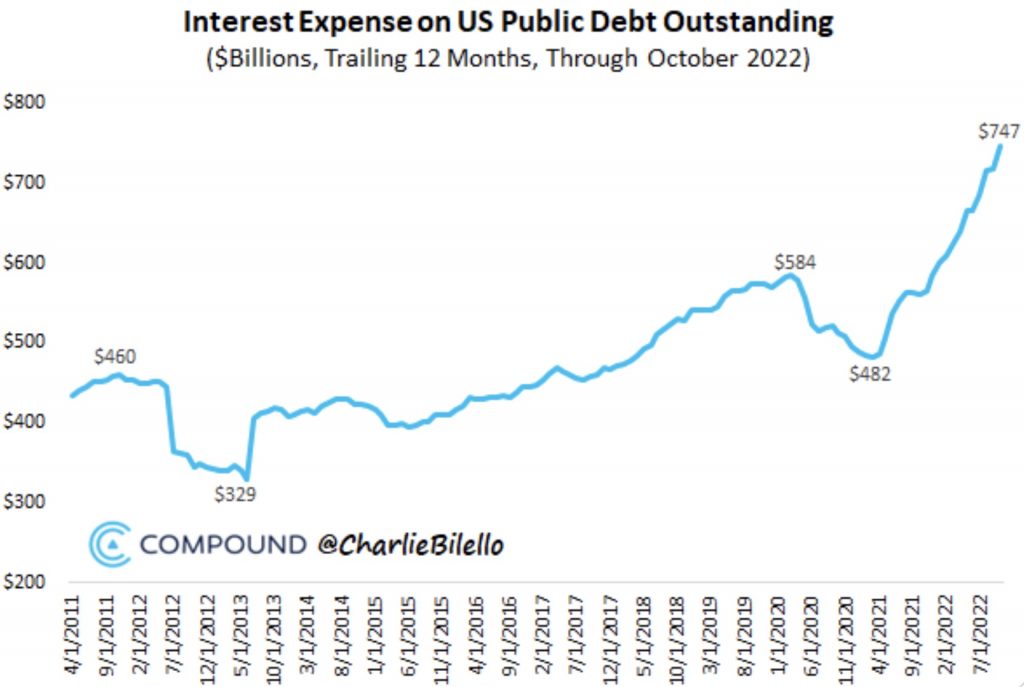 No Confidence
Peter Boockvar:  After rising by 4 months in a row by a total of almost 10 pts off a record low, the November initial UoM consumer confidence index fell by 5.2 pts to 54.7. For perspective, this figure was 101 in February 2020 and bottomed at 71.8 in April 2020. Current conditions dropped by almost 8 pts m/o/m and was lower by 3.5 pts for Expectations. 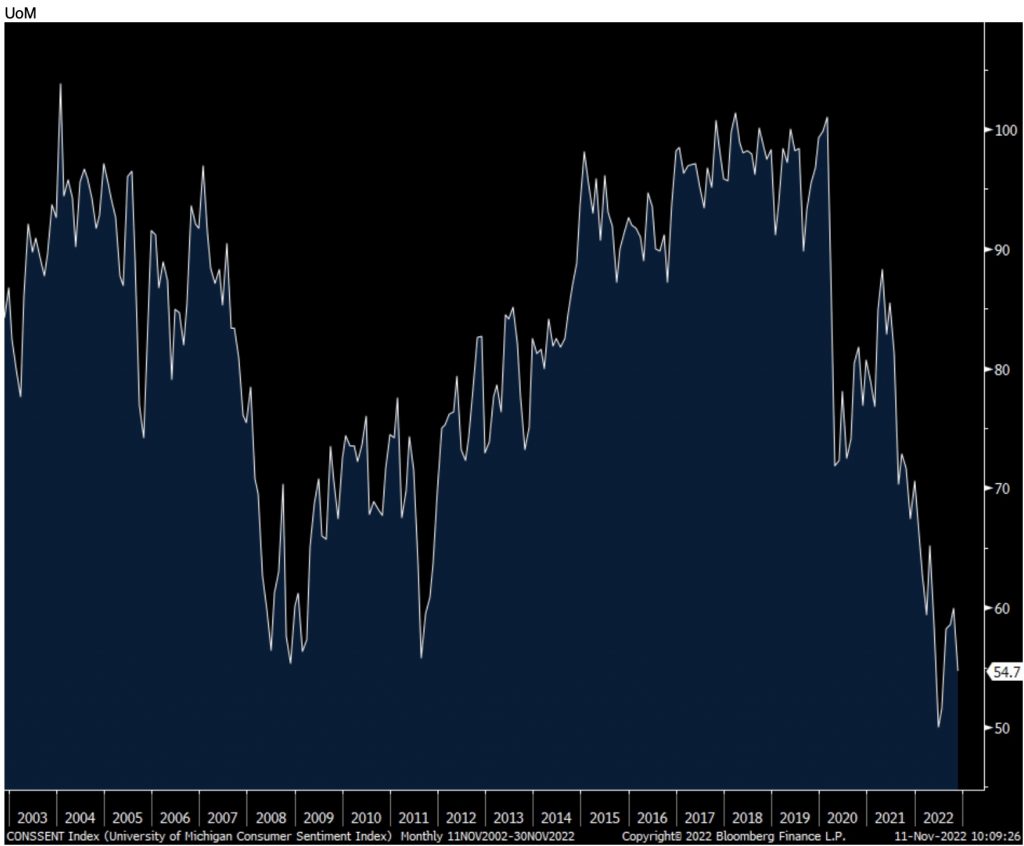 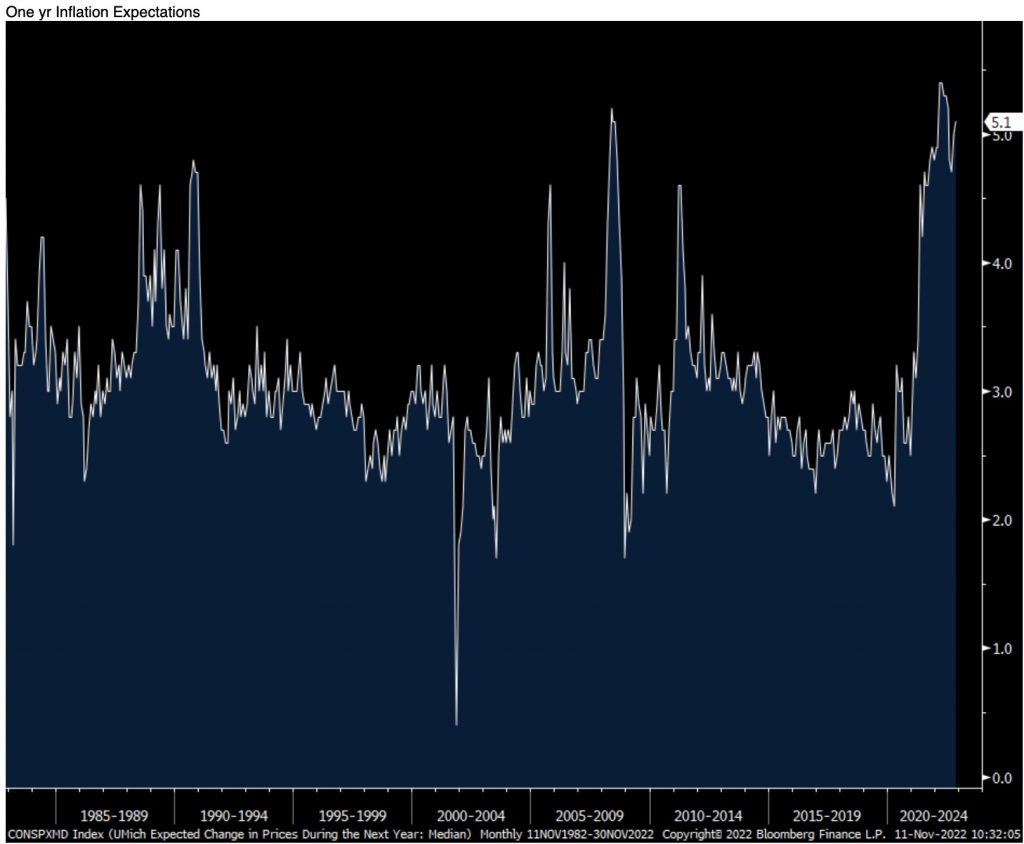 Specifically disappointing was the 6 pt fall in employment expectations to 71 and that is the weakest since August 2011 and we have to keep a close eye on whether this is the next shoe to drop where canaries in tech land are already singing. 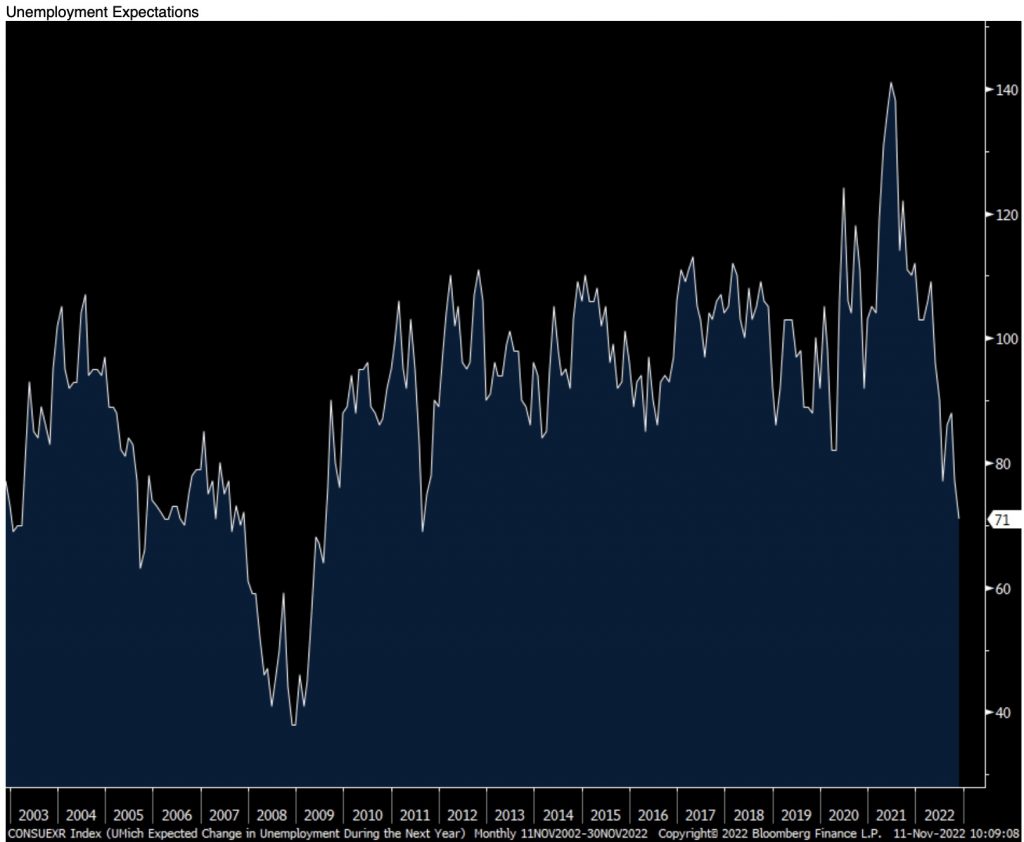 The income component did though rise by 2 pts because less saw ‘lower income’ while ‘higher income’ was unchanged. Positively, the ‘Mean % of Expecting Family Income Will Beat Inflation Over Next 5 yrs’ rose to 35.8%, the highest since April.

Of note was that the weaker level of confidence translated directly into a reduced impulse to buy big ticket, and interest rate sensitive things. Those that said it’s a good time to buy a home plunged by 10 pts and at just 33, it is the lowest that I have data on going back to 1978. And because 92% of homeowners that have a mortgage have a rate below 5% according to Fannie data, there was a 9 pts drop in those that said it’s a good time to sell a house to the lowest since August 2020.

Plans To Buy A Home Crash To Lowest Level In History 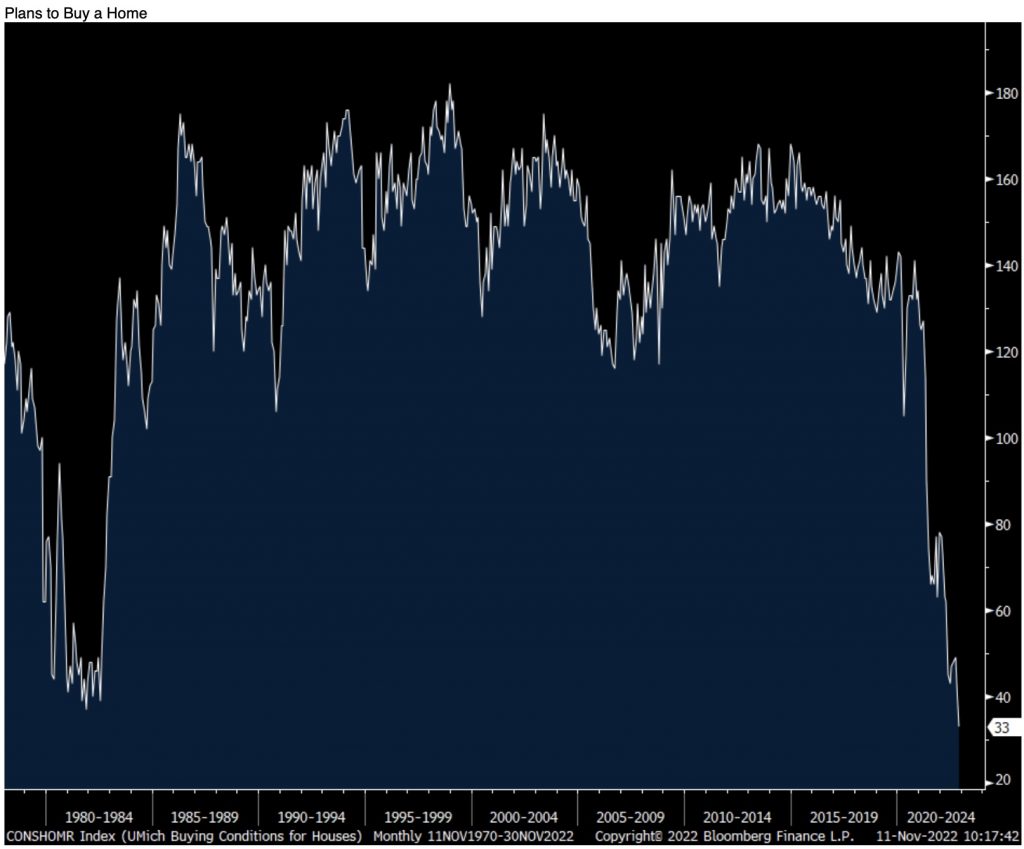 Those that said it’s a good time to buy a vehicle fell 4 pts but after rising by 11 pts in October. On a major appliance, there was a 19 pt drop in spending intentions after rising by 17 pts last month.

To all this on spending intentions, the UoM said “An average of 34% of consumers spontaneously cited high interest rates as a reason for poor buying conditions for durables, cars or homes, the highest share found since 1982 and more than double the share from just 6 months ago.”…

The UoM said this, “Overall, declines in sentiment were observed across the distribution of age, education, income, geography, and political affiliation, showing that the recent improvements in sentiment were tentative.” The lower end consumer is getting hit by falling real wages and UoM threw this one in, “Higher income consumers, whose outlooks were darkened by continued turbulence in stock and housing markets, will likely pull back their spending going forward. With overall sentiment remaining low, these factors highlight the risk of recession in the quarters ahead.”

There is of course no response in cash bonds but as this figure is never market moving, the treasury futures are down with yields up because we’re seeing a selloff in European bonds today. The US dollar remains at its lows of the day.