Early this month gold refused to do the same. Finally last week gold took out the July lows. Let’s see what happens now. So far the new low in gold has not been confirmed by weekly momentum or this larger scale 3-mo. avg. momentum chart. 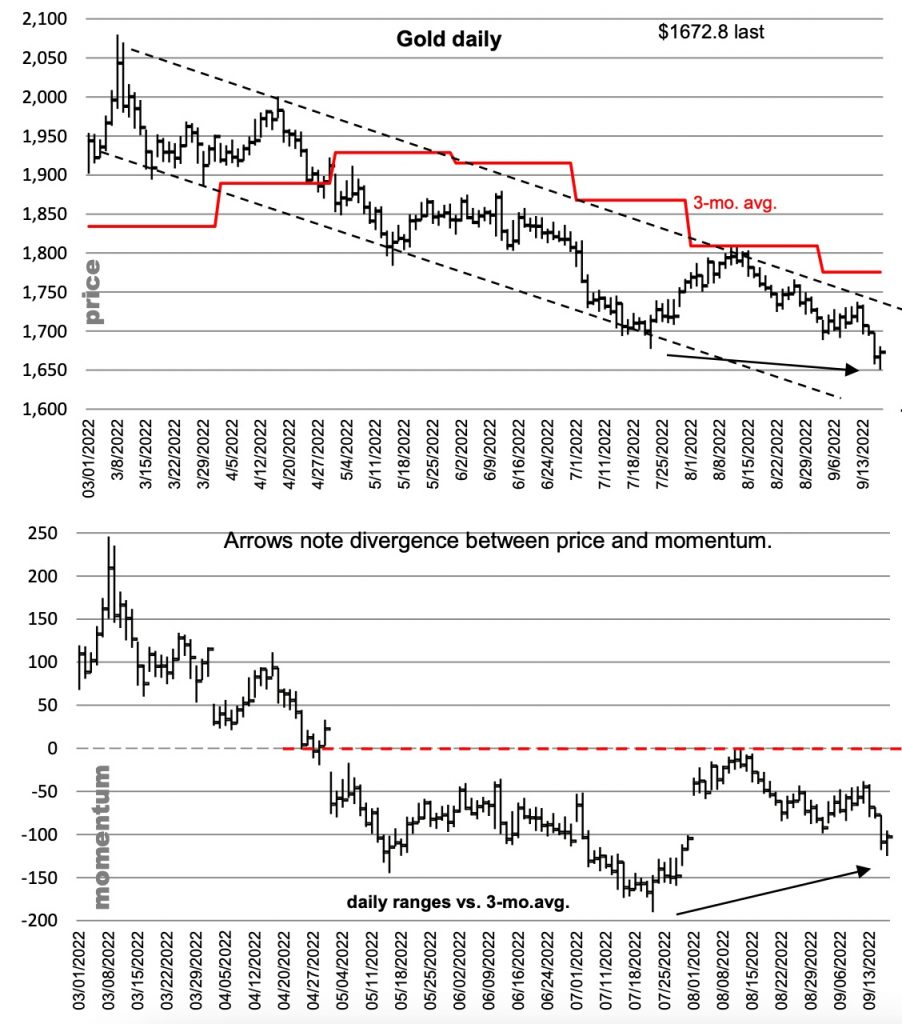 Chart comments, price first. A parallel channel that we respect. Despite new lows, so far price is not having to rely on the channel bottom this time around. Rallying into the mid-$1740s later this week will put action above that declining channel top. A very positive level to overcome, adjusting down daily.

Momentum is widely non-confirming the new price lows. A structure of importance was set at the August oscillator high—the zero line. In eleven trading days that zero line/3-mo. avg. is projected to drop to $1728.2. Meaning if there’s a daily close in October above that falling average/zero line, then momentum will emerge from a base that’s now five months wide.

MSA is currently using October future which expires 10/27. Rotating to the December future then…

Silver
Silver: 3-mo. avg. momentum
Silver has clearly been doing something totally different from gold since early this month. Silver made its non-confirmed low (a new price low below July, not confirmed by momentum) on the first day of trading this month and has since firmed resolutely, totally ignoring gold. 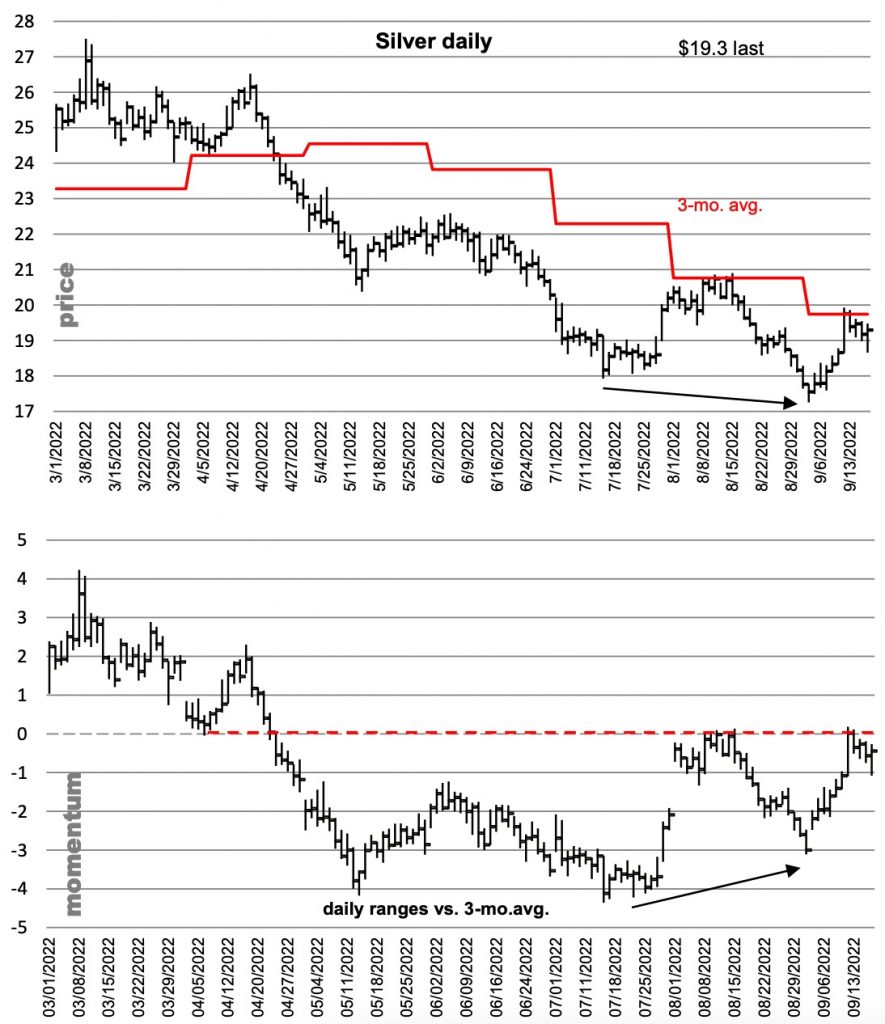 Its momentum structure at the zero line was hit again last week (and very marginally closed above on Monday). But by its pullback during the week, it was clearly still saying that the 3-mo. avg./zero line is the key level to credibly overcome. This month that zero line remains $19.74. (MSA is still using the September future as front month. It’s currently trading about 8¢ below December futures, the more active contract. MSA will rotate to the December future once September expires on Wednesday, September 28th.)

We’re updating the 100-day momentum chart we included in prior reports due to its head-and-shoulder-type bottoming pattern (not evident on price, just momentum). 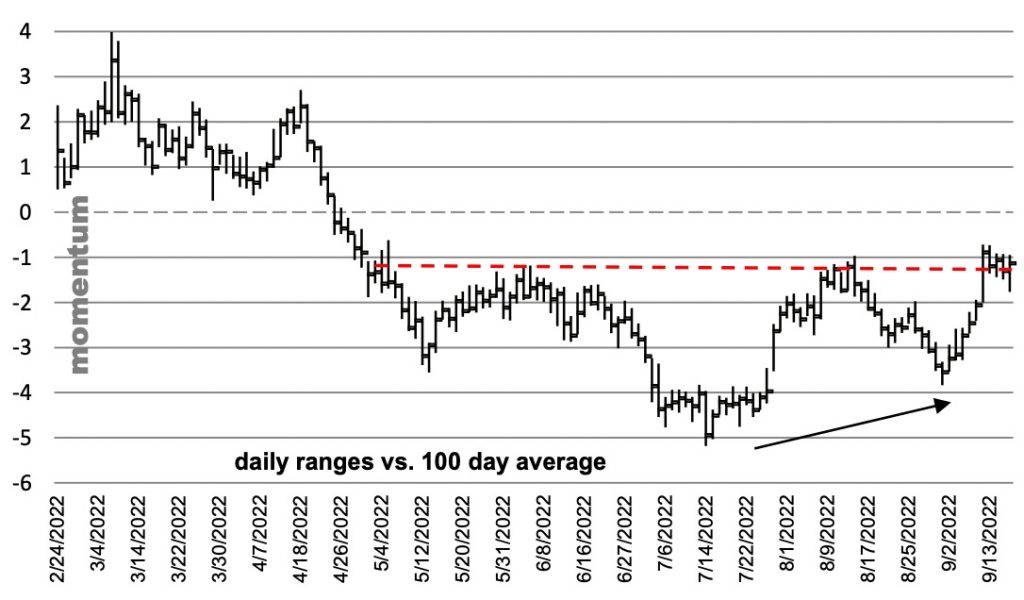 The rally early last week cleared the neckline, and on a closing basis the pullback last week held along that line.

Silver vs. gold: the spread
There was a breakout at last week’s close. The spread’s momentum closed above all weekly peak closes (three at an identical level) going back to March 2021. 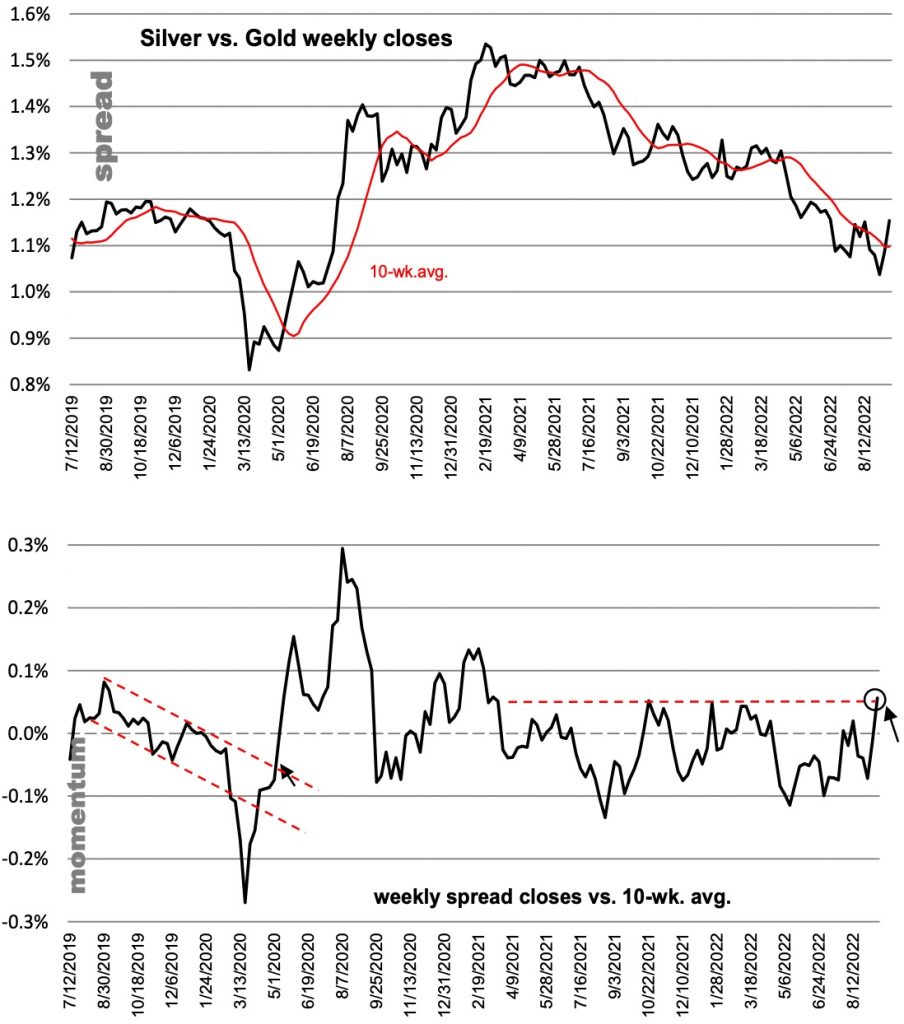 The spread’s momentum produced a less clear breakout shortly after that March 2020 bear trap low. Recall that event? What followed was not only dramatic relative outperformance by silver vs. gold, but also sharp net trend upside in both metals.