Today the man who predicted the global collapse just warned King World News that what is in front of us is truly frightening.

The Frightening End Of The Biggest Financial Bubble In History
April 5 (King World News) – Egon von Greyerz:  A Hyperinflationary Depression has always been the inevitable end to the biggest financial bubble in history. And this time it will be global. Hyperinflation will spread from country to country like Coronavirus. It could start anywhere but the most likely first countries are the US and the EU or ED (European Disunion) They will quickly be followed by many more like Japan and most developing countries. Like Coronavirus it will quickly jump from country to country with very few being spared.

CURRENT INTEREST RATES ARE A FALSE INDICATOR
Ever since the last interest cycle peaked in 1981, there has been a 39 year downtrend in US and global rates from almost 20% to 0%. Since in a free market interest rates are a function of the demand for credit, this long downtrend points to a severe recession in the US and the rest of the world. The simple rules of supply and demand tell us that when the price of money is zero, nobody wants it. But instead debt has grown exponentially without putting any upside pressure on rates. The reason is simple, central and commercial banks have created limitless amounts of credit out of thin air. In a fractional banking system banks can lend the same money 10 to 50 times. And central banks can just print infinite amounts. 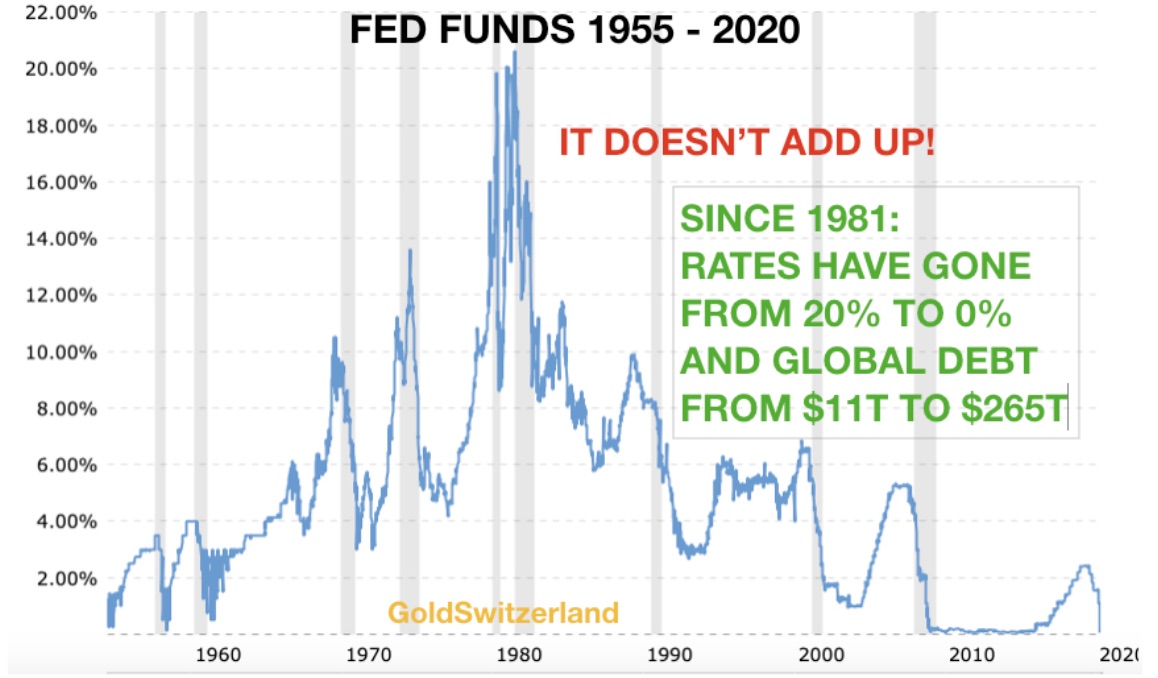 CORONAVIRUS IS THE CATALYST BUT NOT THE CAUSE
The crisis that the world is now encountering has not been caused by the Coronavirus. As I have stressed in many articles recently, Coronavirus is just the catalyst, albeit the most vicious one which could have hit the world. The real cause of the Greatest Financial Crisis in history is the Central Banks. They have been pouring fuel on the fire for 50 years by continuously reducing the cost of money until it became free in 2008 when rates were reduced to ZERO. Since then we have also seen negative rates around the world.

Negative rates are not just a total paradox but also absolute lunacy. Bankrupt sovereign nations around the world have been issuing debt at no cost or have even been paid for it. The whole purpose of interest is to be paid for the risk of lending money. As governments around the world have issued virtually unlimited debt which will never be repaid, the risk  of lending to them has increased exponentially. But instead of much higher rates to reflect severely elevated risk plus massive increase in debt, central banks have gotten away with defying the laws of nature.

FALSE MARKETS WITH NO REAL PRICES
Money is a commodity and the price should be a direct function of risk plus supply and demand. But since we currently have a false financial system with fake money and false markets, there are no real prices. So through constant manipulation and intervention  central banks together with a few accomplices can totally rig most markets and prices…

Therefore, the cost of money today neither reflects the risk nor the demand. All it represents is malicious manipulation to serve governments and their masters the central bankers. But like all fake markets, also this one will end, not just badly but catastrophically.

THE SITUATION IS DESPERATE FOR BUSINESSES AND INDIVIDUALS
As I discussed in last week’s KWN article, we now have the perfect storm. Virtually every government in the world is now committing billions and even trillions of dollars, euros, etc, in fruitless attempts to save a collapsing world economy. In many countries, 50% or more of industry is shut. Most service industries are in a total lockdown and so is aviation, transport, and most small businesses. Unemployment is approaching rates not seen since the 1930s depression. All businesses need assistance, from major corporations to small firms. The majority of individuals haven’t got savings for more than a couple of weeks living, and for the ones who are now becoming unemployed, the situation is desperate.

Many major US corporations need assistance from the government. Very few of these have put aside profits to reserves for a rainy day. Instead management has been too generously rewarded as well as the shareholders. Since 2009, S&P 500 companies have spent $5.4 trillion in share buybacks. Instead of asking government for assistance, management should pay back their bonuses and shareholders who have received major payouts should recapitalise the companies. But this will obviously not happen. Just like in 2006-9, profits are privatised and losses are socialised.

Businesses are hemorrhaging cash and so are individuals. All that becomes a vicious circle with bills not being paid, including rents, mortgages and taxes. Estimates predict a 40-50% fall in second quarter GDP in the US. The problem is that this is not a temporary crisis. This means that GDP will see permanent erosion of a major magnitude in most countries.

SECULAR DOWNTURN LEADING TO HYPERINFLATIONARY DEPRESSION
So what we are experiencing is the start of a secular downturn which soon will become a hyperinflationary depression. This was always the inevitable end to this cycle as I have discussed in many articles for over 20 years.

A crisis of this magnitude is always a debt crisis. Very soon we will see debt around the world come under enormous pressure as borrowers start defaulting. This will lead to bonds crashing and rates surging. Central banks will then lose control of interest rates as long rates first go up, and soon also pulling the shorter rates up. Rates can easily go to 15-20%. Many bonds will go to zero and rates to infinity. I have previously talked about paying 21% on my first mortgage in the UK in 1974, so I have personal experience of high inflation but never hyperinflation.

Since the majority of the $1.5 quadrillion derivatives market is interest related, this market will also blow up. All of this will lead to unlimited money printing and currencies crashing fast to their intrinsic value of ZERO. At that point the entire financial system will be unrecognisable and parts of it nonexistent. All of this could happen very quickly, probably within the next 6-18 months.

2006-9 WAS A REHEARSAL
Could this Cassandra forecast be wrong? Yes, of course it could. But let’s be clear that the rehearsal of what I am predicting took place in 2006-9. Nothing was resolved at that point, just temporarily deferred. This is now the real thing and whatever money central banks print this time will have no effect. So I doubt very much that our banker friends can pull another rabbit out of the hat again because the only trick they know (to print more money) can never solve a debt problem.

MARKETS
Stock markets, in their first leg down of the new secular bear market, reached a 40% loss in most countries in less than 4 weeks. We are now seeing a typical correction that can go a bit higher. But when that is finished, which could take 1-3 weeks, the next devastating downleg will start. Anyone trying to catch this falling knife will be slaughtered.

Bond markets might hold up for a bit longer with massive central bank manipulation and money printing. Junk bonds will first start crashing and constant downgrades will turn a lot of debt to junk. Much of corporate debt will go the same way and within 6-12 months sovereign debt will come under attack.

Property markets are a major bubble and are already starting to disintegrate. Industrial, commercial, retail and residential, no sector will be spared. There will be no buyers, no financing and many forced sellers — a perfect recipe for a collapse.

Before the secular bear market has bottomed in these three markets, prices will be down 90-100% in real terms. And real terms means in constant purchasing power like gold.

We must remember that markets will bottom long before the economy. The likely development is first a hyperinflationary depression that could come and go very quickly within the next couple of years. Thereafter we will most probably see a deflationary implosion of all assets and a collapse of most of the financial system.

But we mustn’t believe that this is the end. It is just another phase in the world economy to correct excesses of the 100 or 300 years or even 2000 years. Once debt has imploded and all asset prices have come down from current fantasy valuations, a new system will emerge built on sound values and principles. And then the cycle starts all over again.

GOLD
There are currently severe pressures in both the paper gold market and the physical market. The Comex and LBMA are making noises that everything is under control. LBMA is giving the illusion that they have plenty of gold in their vaults. But virtually all of that gold is already committed. Comex, the gold futures exchange, is under tremendous pressure since they can’t deliver more than a small fraction in physical when paper holders of gold demand delivery, and that day is not far away.

If we just take the Gold ETFs as an example, they increased their holdings by 93 tonnes in the last 4 weeks. That represents a total value of $5 billion. The 3 biggest refiners in the world based in Ticino, Switzerland have been closed for 2 1/2 weeks, representing at least 50% of world production. It is today virtually impossible to get hold of physical gold, so you wonder where the ETFs have bought their gold. The answer is of course simple. It was lent to them by LBMA banks, which are custodians for the biggest gold ETF GLD.  These banks also hold central bank gold and all they need to do is to lend the same gold yet one more time to the ETFs. So if you hold a gold ETF, which you must never do, that it is unlikely to be backed by gold for more than a small portion of the fund total.

In a world where prices of most assets are about to implode, gold is life insurance and virtually the only asset that will maintain its value in real terms. Silver is also likely to do very well and will most likely outperform gold. But gold is safer and much less volatile. 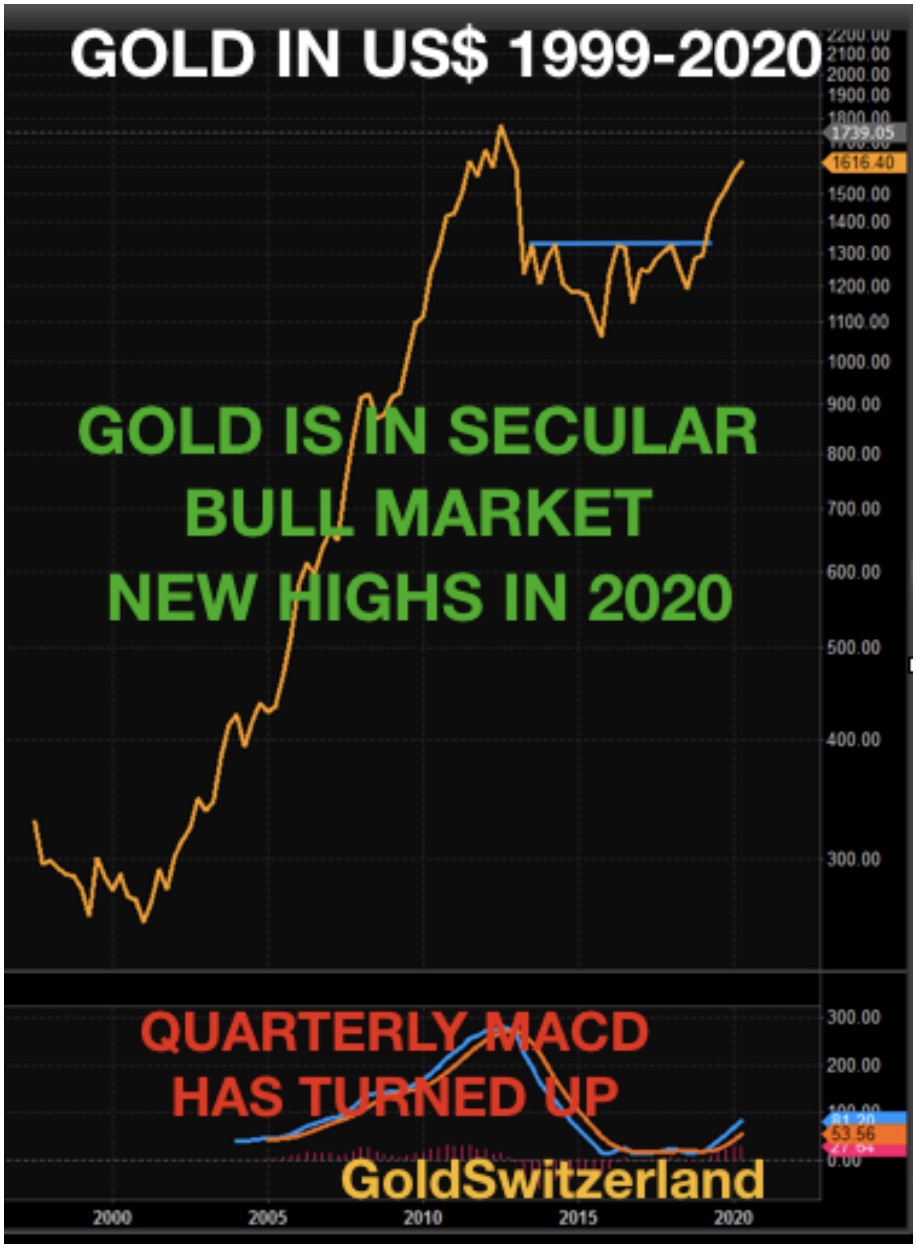 As I have expressed before, I have been standing on a soap box for 20 years in my attempt to inform investors of the critical importance of gold for wealth preservation purposes. Fortunately many investors have listened, but they still represent less than 0.5% of world financial assets. Since we started 18 years ago, gold is up 6-7X depending on the currency. That rise is insignificant compared to what is coming next.

But remember you are not holding gold to measure the gains in debased paper money. Instead you are holding physical gold as insurance against a broken financial system that is unlikely to be repaired for a very long time…For those who would like to read more of Egon von Greyerz’s fantastic articles CLICK HERE.