Today the man who predicted the global collapse just warned it’s going to get really scary before this is over.

It’s Going To Get Really Scary Before This Is Over
May 3 (King World News) – Egon von Greyerz out of Switzerland:  As the world economy implodes, very few investors realise what will hit them. The dip buyers of stocks don’t understand that it really is different this time as the world is now facing the biggest destruction of wealth in history. Stocks, bonds and property are likely to decline by at least 95% in real terms in the next few years. With both sovereign and private defaults, many bonds will go to zero and interest rates to infinity.

We are not just talking about the US and Europe but the whole world, including China, Japan, and emerging markets. This will clearly involve a very unpleasant and disorderly reset leading to great suffering. But there is no other way of solving a gigantic debt problem caused by central banks. What these central banks are now doing is obviously a travesty. A debt problem of the proportions the world is facing can never be solved by more debt, even as all central banks around the world desperately engage in more money printing, which is debt.

IRRATIONAL EUPHORIA PREVAILS
As 30 million Americans are unemployed and US GDP is expected to decline by 40% in Q2, the Dow Jones has rallied almost 6,000 points in the last 5 weeks. And the FAANG stocks (Facebook, Amazon, Apple, Netflix and Google) have surpassed their all-time high. So it appears like happy days are here again, at least for the permabull stock market investors who believe that all the money printed by the world’s central banks will again create another 10 year bull market…

Investors are already looking past the Coronavirus. Few realise that CV is not the underlying reason for the collapse of the world economy but only the trigger. And for investors who clearly believe that there will soon be an end to this horrible pandemic, sadly, they don’t understand that it is likely to affect the world for many years. And the hope for an effective vaccine for a virus that has so many different mutations seems overly optimistic. History confirms this. It normally takes years to develop a vaccine, but even then, flu vaccines in recent years have only had a success rate as low as 30%.

MY 1999 EPIPHANY
This market optimism reminds me of my 85 year old aunt in Florida. According to her sister, my aunt was so successful in buying tech stocks that in 1999 she also taught her cleaning lady how to make money in stocks. Before the tech boom, my aunt had never invested in stocks, but now she was an expert like everybody else at the time. Well, this was a real epiphany for me, watching the blind lead the blind to the stock market. This was the clearest sign of the end of a stock market bubble, like the shoe shine boy giving you stock tips.

At the same time, a friend of mine had built up a successful tech business.I was involved in the company and this was the time when these companies made no profit but were still valued at 10x sales. I sensed that the tech bubble would end in tears, so I told my friend that we must sell the business and take cash only or stock that we could sell immediately. So we did sell the business to a Hong Kong based Nasdaq company and got rid of our shares straight away. Two years later, the Nasdaq had lost 80% and the company we sold to was bust.

GALLOPING GLOBAL DEBT
No boom or bubble is the same, but what is clear is that global debt has grown from $80 trillion in 1999 to $125T in 2006 (at the beginning of the Great Financial Crisis), and more than $270T today. The acceleration in money printing now taking place is likely to take global debt to over $300T in the next couple of years. But that would be an optimistic base case. If we add bank failures as well as corporate bankruptcies, global debt could rise to a level in excess of $1/2 quadrillion. And once the derivative bubble bursts, the world could face a debt in the $quadrillions.

STOCKS – SUCKER’S RALLY
So what we are seeing now is a rally in stocks that will end in tears for the dip buyers as well as for the permabulls. But this is normally how a secular bull market keeps its riders hanging on through the collapse. There is normally a plunge in stocks with panic, and then a strong rally that sucks everyone back in before the ultimate decline fully expresses itself. And this is what we have just seen in the last 5 weeks. This corrective rally may have already ended or it might last for a bit longer. But the risk is to the downside and the next fall will be devastating and a big shock for investors.

1929 vs Today
We saw the same type of action in 1929 when the Dow plunged from 381 to 190 and then rallied 50% to 290 before crashing to 42 in 1932. Today the long term Dow chart shows a turn in the quarterly MACD. This is very significant. There have only been two other previous downturns in this indicator this century. The first one was at the end of the tech stock bubble in 2000, and the second one was in connection with the subprime crisis in 2007. Both led to significant falls. 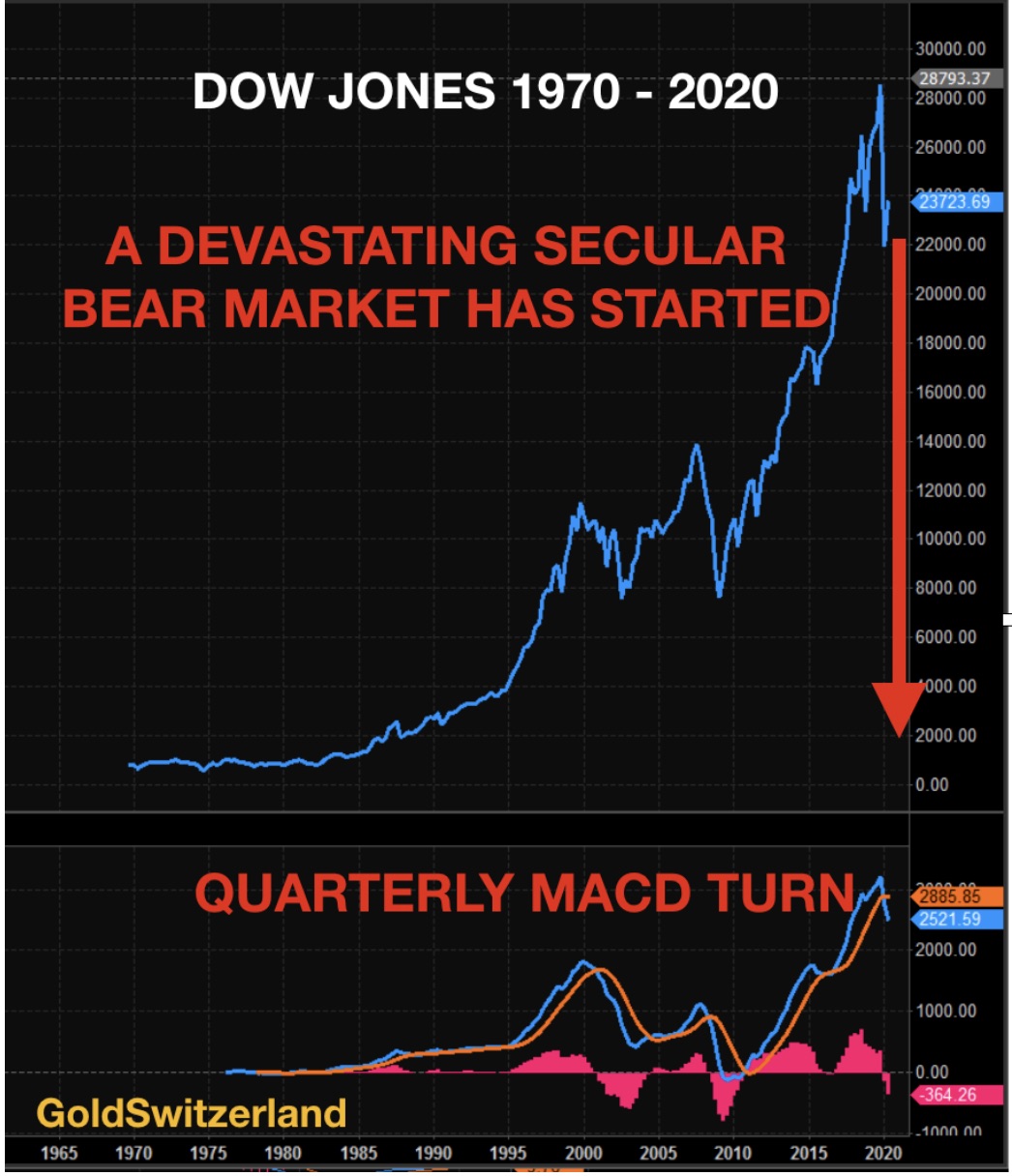 Since I believe we are now at the end of a major 300-year cycle (or possibly even longer), the fall this time will be greater than the 1929-32 collapse of 90%, at least in real terms, measured against gold. During the coming hyperinflationary depression, the Dow might not decline >90% in nominal terms, especially if gold has a price with many zeros, which is likely. For example, gold in Venezuela is now 425 million bolivars. But since I expect that the relatively brief hyperinflationary period, maybe 1.5 to 3 years, will be followed by a deflationary implosion of assets and debt, we could very well see the Dow going down to the 500 to 1,000 level, where it was in the 1970s until the early 1980s. That would be a 98% fall from here. 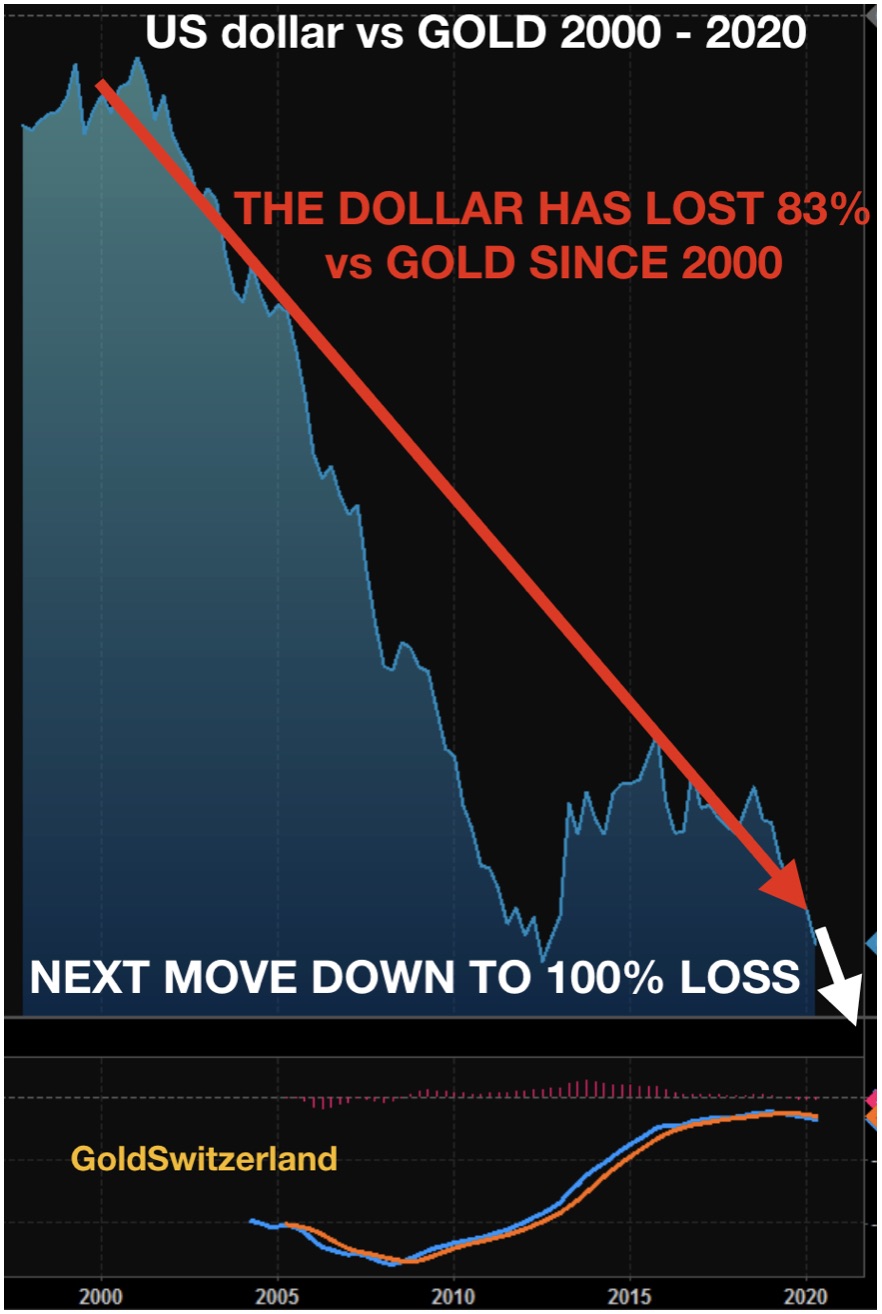 GOLD
I wrote about what I called the Gold Maginot Line in February of 2019, which had held the price of gold below $1,350 since 2013. At the time, gold was $1,320, and I forecast that this 6-year old resistance would break within 3 months. Gold broke out in early June of 2019, and hasn’t looked back since. This was the signal that the gold uptrend would resume also in dollars.  In all other currencies, the uptrend was already confirmed. So just under a year later gold has gained $350 and is now $1,700. We are now likely to see a relatively fast move to $2,000 and beyond.

Technically gold has looked extremely strong for a while and has been due for a bigger move. When the technical picture predicts a move, there is normally always some trigger or fundamental factor that causes the move. The massive money printing by the world’s central banks provides the perfect backdrop for the accelerated debasement of the currencies and rise of gold.

Many people are asking what I am forecasting regarding the gold price for this year and coming years. Since we have been invested in gold for 18 years, we have never worried about the price. It was always clear to me that money printing was going to accelerate and that the global financial system would come under enormous pressure, even to the extent that it might not survive in its present form. With that background, it is totally irrelevant what the gold price will be tomorrow or in 6 or 12 months time. We are holding physical gold to protect against a collapsing financial system and currencies which will be printed all the way to their death. Why then does it matter if gold goes to $10,000 or $100,000 in today’s money or billions or trillions of dollars in hyperinflationary money?

The alternative of not owning gold is not worth thinking about. And if after the hyperinflation we get a deflationary collapse, gold will still be the only real money and will do a lot better than any other means of payment. So my advice is to not look at gold as a conventional investment and worry about where it is going in order to try to finesse your entry price. Also, it is totally irrelevant to measure gold in worthless printed money. Physical gold is critical life insurance and protection against the worst financial storm in history. That should be your only consideration. So don’t wait for the storm to pass but learn to dance in the rain…For those who would like to read more of Egon von Greyerz’s fantastic articles CLICK HERE.