Inflation is crippling the average person, but look at what just hit an all-time record.

More Inflation
October 26 (King World News) – Peter Boockvar:  While somewhat dated, S&P CoreLogic said its US home price index rose 19.7% y/o/y in August after a 20% print for July. While we know this is not included in CPI and rents are instead, if it was, CPI would running north of 10% as housing alone is 30% of CPI and 40% of the core. 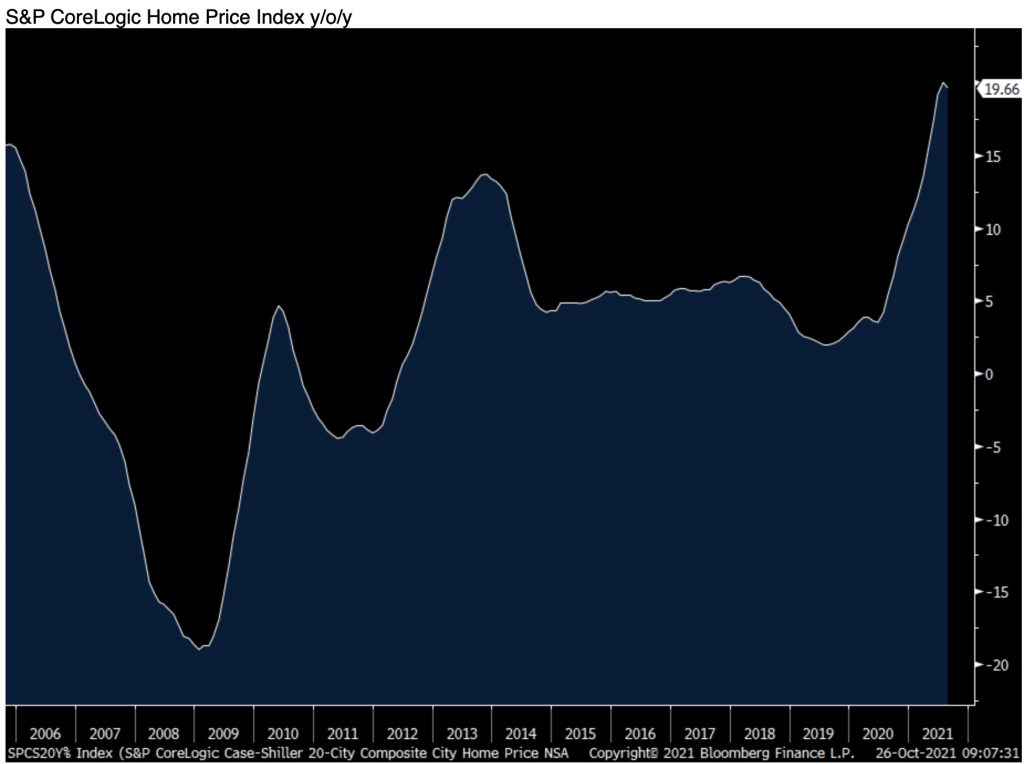 A 33.3% increase in the Phoenix area led the way. One would think this was bitcoin but instead is a home that some family is trying to purchase. San Diego and Tampa rounded out the top 3 gainers. At the bottom in terms of price gains was Chicago with ‘only’ a 13% increase with Minneapolis and DC right above.

1970s-Style Stagflation
Bottom line, the cost of living is running at an aggressive pace and ending QE does nothing to offset that. Only rate hikes really impact demand and we know Powell is afraid right now to touch that. Instead it will be the inflation itself that slows demand. With respect to housing, there are definite signs that buyers are stepping back and the pace of home price gains is on the cusp of slowing.

New home sales in September totaled 800k, 44k more than expected but almost completely offset by a downward revision to August by 38k to 702k. Smoothing out this volatile number has the 3 month average at 738k vs the 6 month average at the same 738k. The year to date is 791k and 12 month average is 824k. 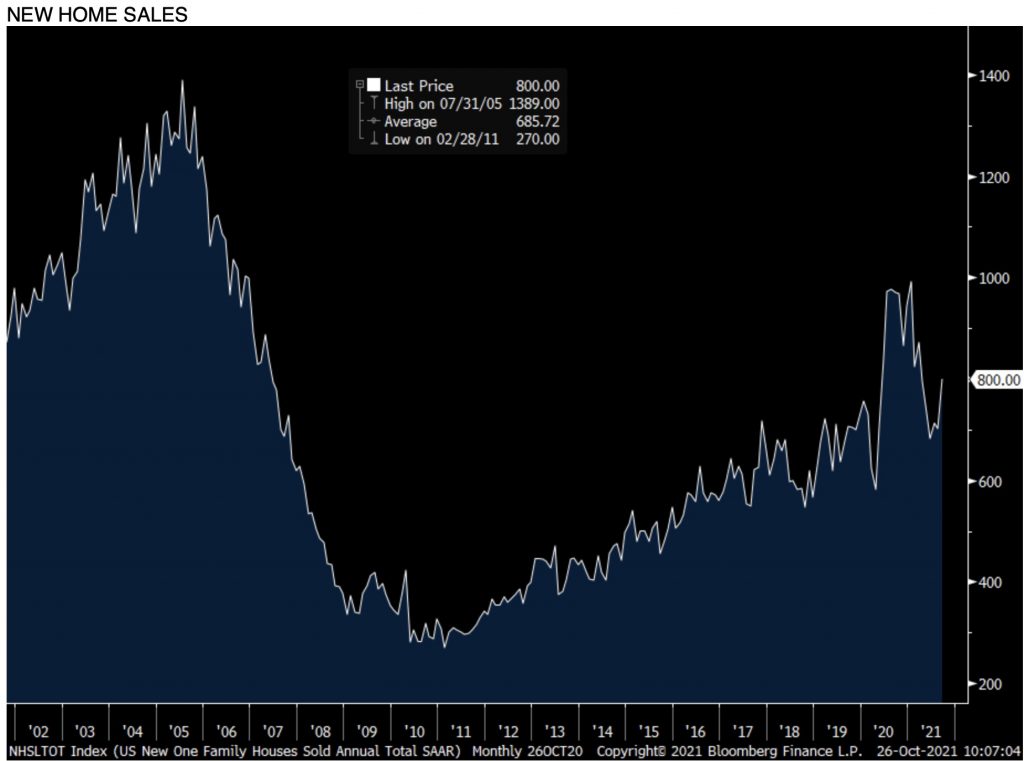 The y/o/y median home price was up 19% which is pretty similar to what S&P CoreLogic said for August in its different calculation. Months’ supply fell to 5.7 but at around 6 is historically average.

One Year Inflation Expectations Highest
Since 2008 When Oil Was Near $150! 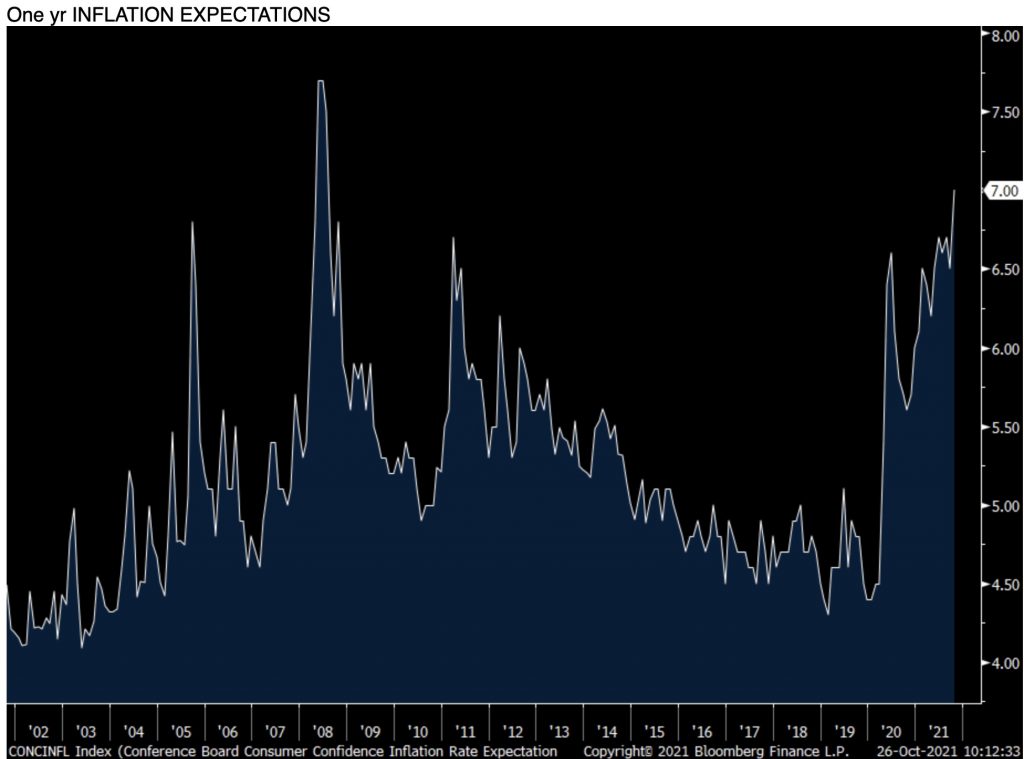 The answers to the labor market questions were mixed. Those that said jobs were Plentiful fell .9 pts but remains at a high level while those that said they are Hard to Get fell to just above the lowest level since July 2000 which makes sense considering how many job openings there are. Income and employment expectations improved as well.

Time For A Vacation?
Off historically low levels, spending intentions did grow. Those who said it’s a good time to buy a car rose .9 pts after falling by 1.4 pts last month. Those that plan to buy a home rose 2 pts to the most since February. Maybe that is due to the rise in rates that is encouraging people to get off the fence or home price gains are slowing as stated. Intentions to buy a major appliance was up 2.6 pts but after dropping by 4.1 pts last month. Lastly, with Covid in control, plans to take a vacation rose to the most since February 2020.

Bottom line, rising inflation expectations did not inhibit consumer confidence but as stated, it still remains well below where it was pre Covid. Spending intentions weren’t bothered by inflation either but that is in stark contrast to what the UoM confidence data has said. We’ll see the updated UoM info on Friday.

Another Day, Another Record
Lastly, the Richmond October mfr’g index rose to +12 from -3 and that was 7 pts above the estimate. New orders, shipments, employment and backlogs all rose with Vendor Lead Times rising to a record high. Inventories remained low. Wages fell slightly as did prices paid but prices received rose to a record high dating back to 1997. 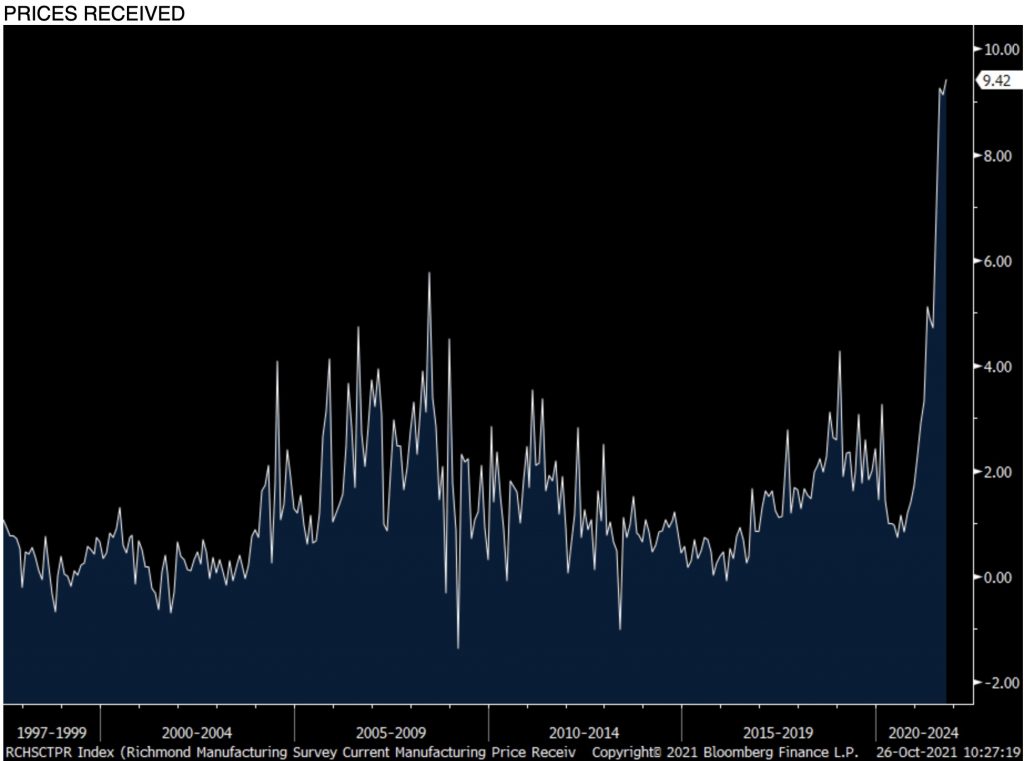 The bottom line is the same with just about everything in manufacturing where demand is still way exceeding the supply and companies are doing their best to pace on those higher costs to the rest of us which eventually in turn will slow demand.