After another tough weak for the precious metals, here is a look at what the bullion banks are doing in the gold and silver markets.

March 5 (King World News) – Alasdair Macleod out of London:  Gold and silver prices continued to decline this week, with gold falling $37 to $1696, and silver down $1.32 to $25.27 in European morning trade today. A notable feature is the continuing decline in Comex open interest in both metals, with gold OI at the lowest level since June 2019, and silver at 156,682 contracts the lowest since last December. The bullion banks appear to have defeated the RobinHood/Reddit physical silver squeeze. 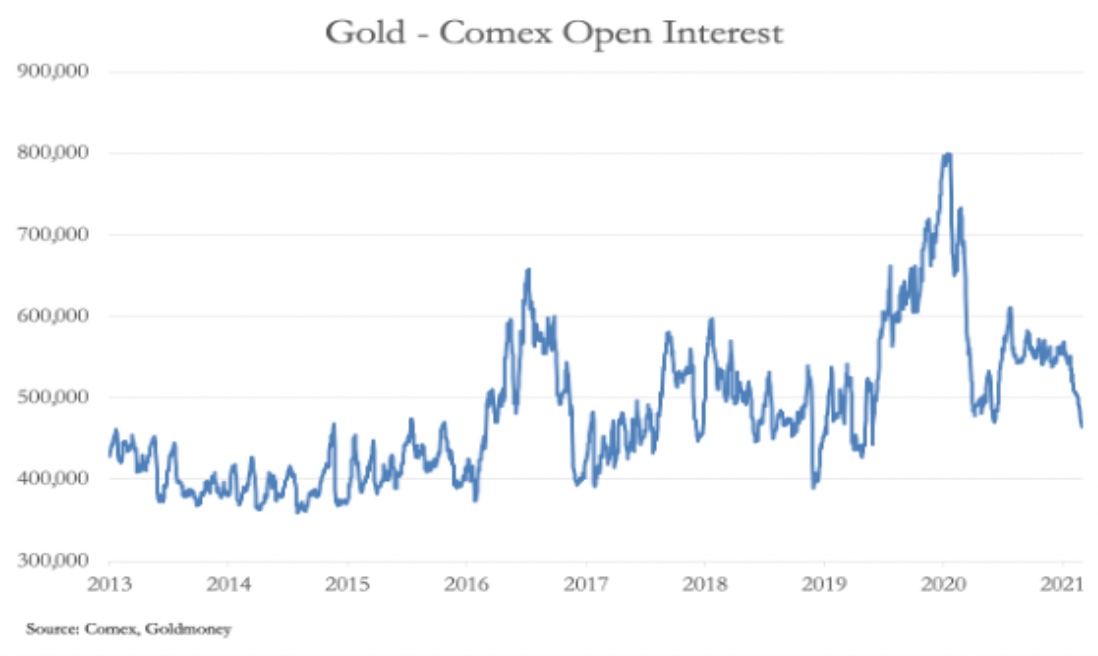 It appears that bullion banks are finally winding down their exposure, and the most recently available position is shown in the table below.

Bearing in mind that on 5 January the Swaps (bullion bank trading desks) were net short 215,463 contracts, a decline of nearly 57,000 to 158,659 is significant. And since 23 February (the date of the table above) open interest has declined a further 16,412 contracts, which suggests that their net shorts are down to under 150,000.

The money position for the bullion banks has improved, but still has some way to go, which is shown in our next chart. 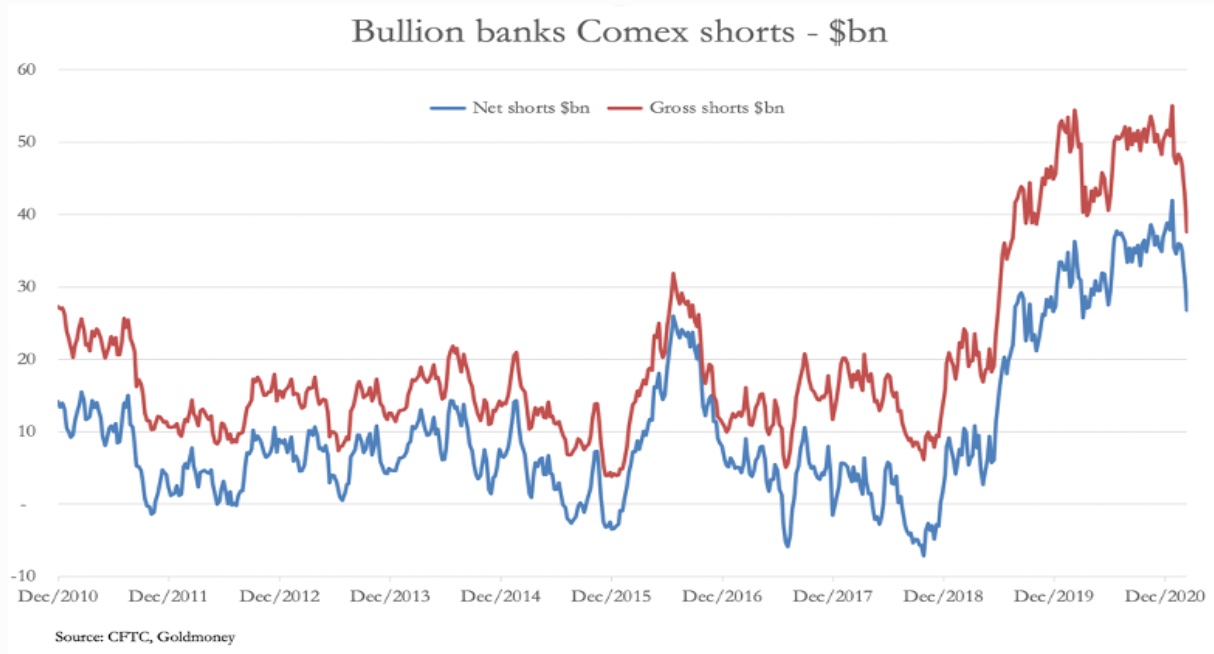 This was the position on 23 February modified for today’s gold price. Given further declines in open interest from that date, the net short position is now likely to be under $25 billion…

Driving negative sentiment for precious metals has been the rapid increase in global bond yields, and the lack of any mollifying response from central banks. The next chart is of the 10-year US Treasury yield. 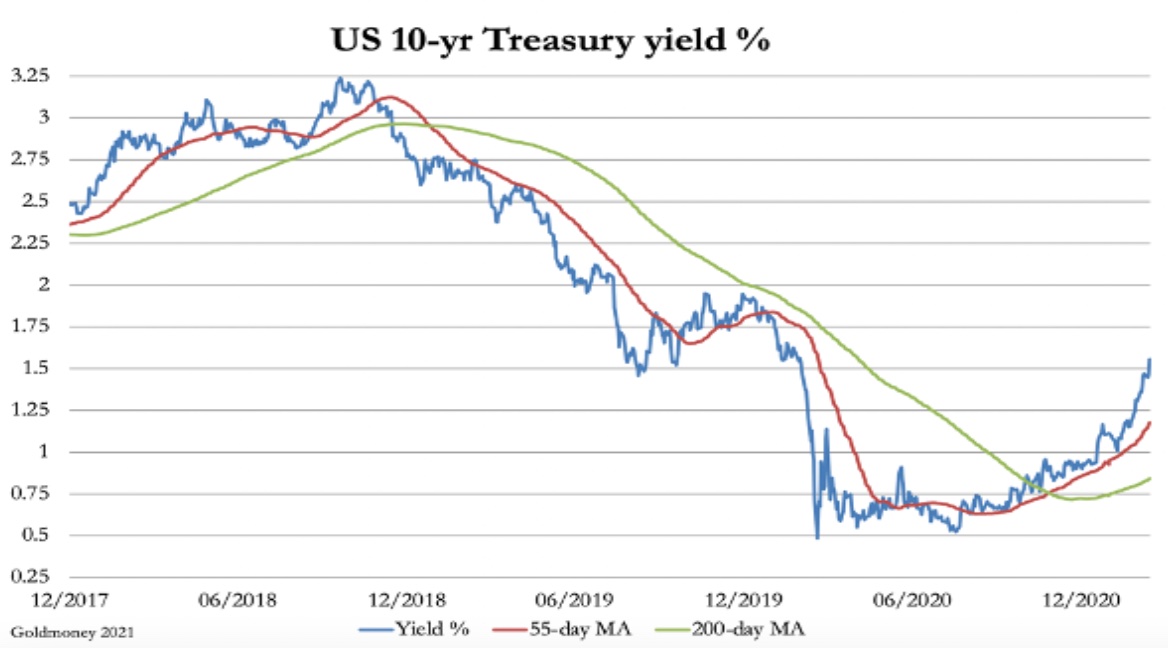 With the yield up 0.5% since early February, hedge funds in the Managed Money category will be prepared to reduce their net longs further, taking the view that the interest rate penalty for gold is increasing. And with the Fed showing no signs of extending the Supplementary Liquidity Ratio beyond March, which means banks have limited balance sheet capacity to hold Treasuries and therefore will have little option but to turn sellers on balance, further steepening of the yield curve cannot be discounted. That said, there are significant short positions in bond markets to be closed, which may temporarily put a cap on yields.

It therefore appears that a new liquidity crisis may be evolving ahead of the end of the first quarter, unless the Supplementary Liquidity Ratio is extended. If not, the reaction could be for additional rises in bond yields and further falls in gold and silver before things turn for the better…

This is an opportunity to remind ourselves that the initial reaction to a monetary crisis is often an investor scramble into short term US Treasuries and dollar cash as the ultimate safe haven. Gold and silver positions get sold down in the process, before global funds, acutely aware of foreign exchange and counterparty risks begin to invest heavily in gold. Our last chart shows this effect following the great financial crisis and the failure of Lehman. 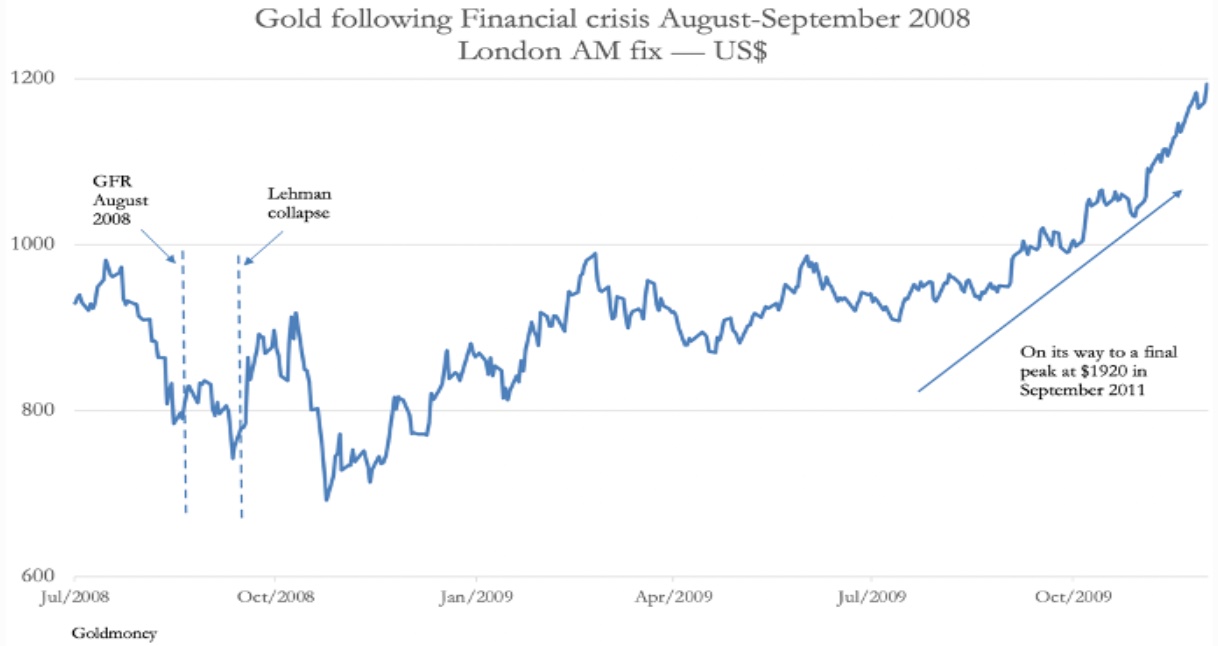 The Fed faces a dilemma. Does it extend the Supplementary Liquidity Ratio beyond March, and let inflation rip, or does it draw a faint line in the sand? The decision is of immediate interest to precious metals markets.

Within hours KWN will be releasing an audio interview.

Legend Pierre Lassonde Says A Massive Tidal Wave Of Buying Has Started That Could Send The Price Of Gold Over $10,000