Today the man who has become legendary for his predictions on QE and historic moves in currencies and metals told King World News that the Perth Mint, which is run by the Australian government, does not appear to have their clients’ physical gold and silver. Is a major scandal brewing?

April 18 (King World News) – Egon von Greyerz at Matterhorn Asset Management (based in Switzerland):  The silver price today is half of the January 1980 level. That was the peak (at $50) which silver reached again 31 years later in 2011. But alas, the bullion banks, aided by the BIS (Bank for International Settlements) and central banks have again managed to push it down again and today silver is only $25.90.

The current silver price has nothing to do with supply and demand. In a real market the Price of Silver would be substantially higher. In a fake market, the manipulators have no problem to suppress the price by selling virtually unlimited fake paper silver.

EVERY SINGLE OUNCE OF PHYSICAL INVESTMENT SILVER IS ESTIMATED TO HAVE 500-1000 PAPER CLAIMS.
If a salesman has a demand for 1,000 items of a product of which he possesses the only one available, he will first rub his hands and then perform a victory dance. He knows he will achieve an astronomical price.

And that is exactly what would happen in a free silver market. But since the paper silver issuers know that they are dealing with totally clueless buyers who don’t understand that there is no silver, they will continue to stuff the gullible buyers with more fake silver…

That is, until the buyers wake up and ask for delivery to find out that the silver vaults are empty.

We know that the silver market is very strained already. Retail silver can fetch margins up to 50% and they have been at 100% premium. But at least when people buy retail silver from a reputable dealer and take delivery, they know that they have real silver.

I have warned investors many times not to buy gold or silver ETFs or funds of any kind. The risks are multiple. Here are some of them:

There have been many reports of problems of getting physical delivery from mints and bullion dealers.

John Evans of As Good As Gold Australia has reported extensively on the problems at the Perth Mint. Numerous investors holding paper or synthetic silver with the Perth are reporting delays of 4 months when they ask for delivery. Even clients who have demanded and paid for their silver to be transferred from unallocated to allocated have been told that they can’t get delivery.

The Perth Mint is owned by the government of Western Australia so you would not expect them to renege on their commitments. Still, I wouldn’t store my gold with any government whether it is in Australia, Canada or the US.

Interestingly, I remember the Perth Mint having similar problems 10 years ago, when the delay for getting physical delivery of the gold and silver certificates was up to 6 months!

So it is not the first time that the Perth Mint is in trouble. When not even a government owned organisation can be trusted, it is clear evidence how careful investors must be.

Gold and silver must be owned and held directly in physical form. The precious metals must be stored outside the banking system in the safest vaults and jurisdictions. The investor must also have direct personal access to the vault.

You should never store more gold and silver at home than you can afford to lose. It doesn’t help with a good safe when burglars come to your house and threaten members of your family when you are in.

HYPER- STAG- IN- DE- FLATION
The debate about -flation continuous with both camps feeling strongly about inflation or deflation. I have for many, many years been of the firm opinion that this economic cycle will lead to hyperinflation.

But it is not as simple as that. Hyperinflation is a monetary event and arises as a result of a major increase in money supply which leads to the total debasement of the currency.

We already have both a massive increase in money supply and all major currencies which have declined by 97-99%. The next phase will be unlimited money printing combined with a substantial increase in the velocity of money.

However, hyperinflation is not the only flation we will experience. We will also see stagflation and deflation.

The hyperinflation will occur in most commodities including food, oil, hard assets and especially gold and silver.

There will also be stagflation which means economic stagnation combined with inflation.

The flation which ordinary people will notice will be hyperinflation. The cost of living and especially food prices will rise dramatically. At the same time, many people will lose their jobs. Pensions and social security payments will not in any way keep up with inflation and many people will sadly be destitute.

MASSIVE WEALTH DESTRUCTION FOR THE WEALTHY
The deflation or collapse of bubble asset prices like stocks, bonds and property (in real terms) will be mostly noticed by the wealthy. They will experience a devastating decline in their wealth. The current bubble of billionaires’ and millionaires’ fortunes will burst and $100s of billions of assets will go up in smoke.

The Arnaults, Gates, Musks, Bezos and Zuckerbergs of this world will not understand how quickly their wealth disappeared. Easy come and much easier go!

But don’t get me wrong. None of these guys will be poor. They will still have massive wealth although it might have gone down by 75-95%. Obviously with that kind of drop they will feel extremely poor.

The biggest beneficiaries of the coming wealth transfer will be owners of commodities, like food and hard assets.

MARKETS
The turn in markets is slowly approaching. No one should hold ordinary stocks now. The risk is massive and a crash can happen at any time. It is never worth squeezing the last few pennies out of a 40 year (at least) bull market. Even worse to follow it 90%+ down (in real terms) in the coming years.

GOLD HAS TURNED
When I sent the tweet below out on March 31st, gold was $1,707. Gold had twice touched the $1,670s and told us that the 8 month correction was finished. 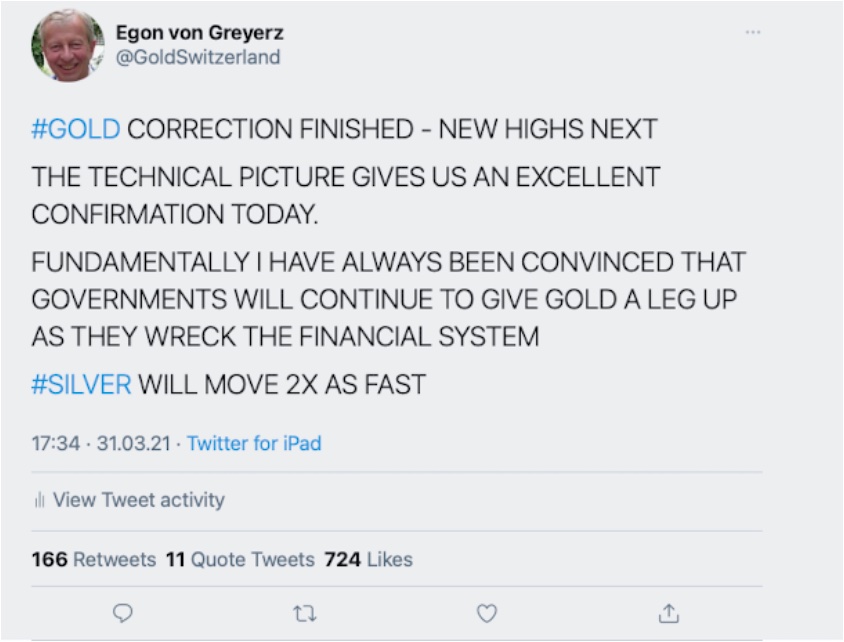 The price is up $70 since the tweet but that is just the beginning. Sadly, very few investors have taken advantage of this opportunity to acquire gold at a low price. Now is still a great time to get in on what will be the biggest bull market in the history of gold and silver. 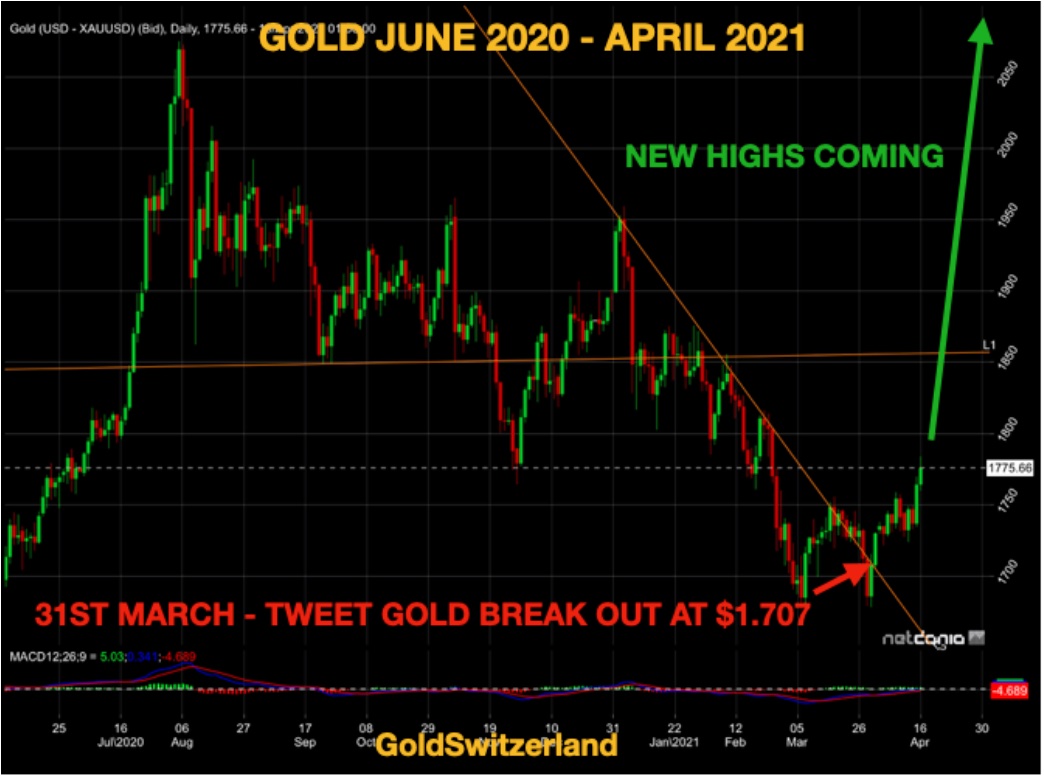 What investors must remember is that on the other side of the gold and silver coin is a collapsing currency.

That is why wealth preservation is so critical. Not only will stocks, bonds and property collapse but so will the value of money. So going liquid is not the solution.

Again, history tells us what the solution is and if you defy history, you will come to regret it…This will link you directly to more fantastic articles from Egon von Greyerz CLICK HERE.

Whatever You Do, Don’t Make This Critical Mistake In The Gold Bull Market