As the world edges closer to the next crisis, today the man who has become legendary for his predictions on QE and historic moves in currencies, told King World News that the consequences of what is about to happen will be horrific for the world.

The currency is often the best indication of a country’s economic health. Just look at these six currencies submerging into obscurity: 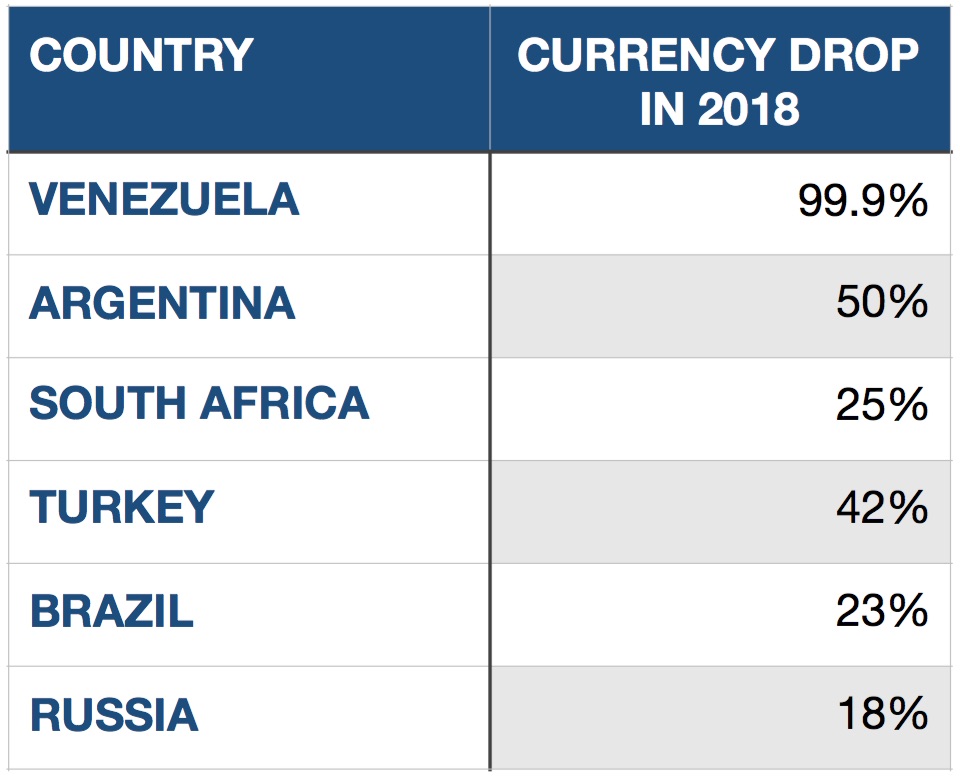 But these are just some of the worst ones. The currency collapse is spreading like wildfire. High inflation and hyperinflation is hitting country after country. Here are some more countries with collapsing currencies in 2018: Sudan -61%, Angola -39%, Liberia -18% and India -12%. The list goes on. There are at least another 15 countries whose currencies have lost 10% or more against the dollar in 2018…

The $50 Trillion Problem
The BRIC countries — Brazil, Russia, India and China — encompass 40% of the world’s population and has a GDP of $20 trillion. Therefore, the weakness that these economies are showing is an ominous sign for what is to come. Their downturn is obviously not on the scale of Venezuela or Argentina but it is an indication of how the world economy is starting to fray at the edges.

An economic downturn would not be so serious if the world wasn’t indebted up to the hilt. Western economies have debts that they can never repay but it is even worse for submerging markets since their growth has been financed to a large extent with US dollar debt. Submerging market debt was $8 trillion in 2000 and is now approaching $50 trillion.

The dollar denominated part of this debt has grown exponentially and since most of these countries’ currencies are falling substantially against the dollar, they are likely to default on their debt in coming years. As the graphs show below, dollar denominated debts have gone up 5 to 10 times for most of these countries. The currency of virtually every country in the graph is coming off rapidly and will continue to fall until it becomes practically worthless. 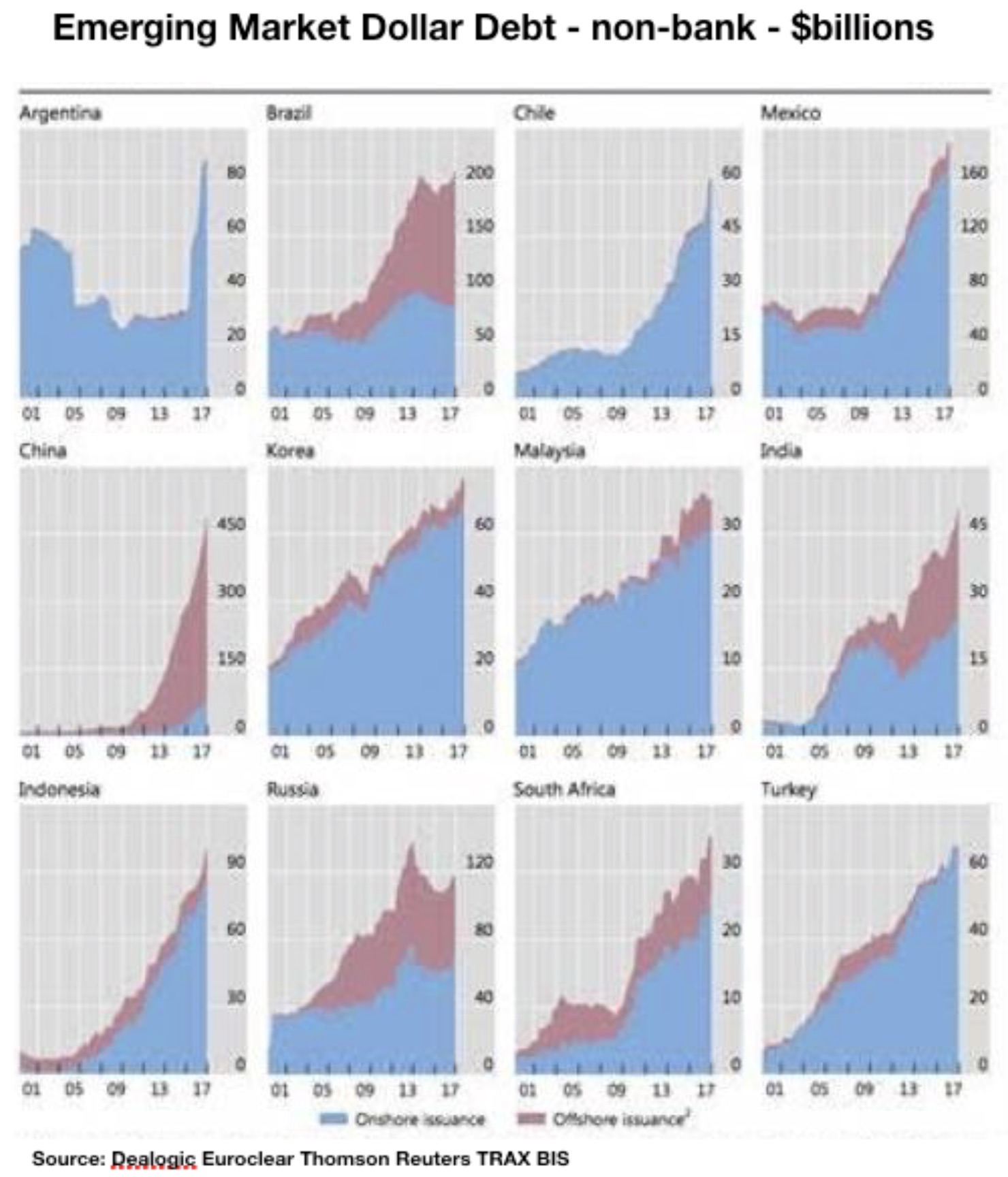 If we have a quick look at Argentina, we can see the pattern that will hit not only emerging markets but also the West. With high inflation and the Peso collapsing 50% this year, Argentina has raised interest rates to 60%.

No country can cope with interest rates at 60%, especially not one with a heavy debt burden. So rates at that level is total lunacy and will quickly kill the patient if it continues.

The message cannot be clearer. Debt growing exponentially and totally out of proportion to the growth of GDP will eventually lead to a currency collapse and then default. The world could deal with Argentina defaulting. It has happened numerous times already. The same is true of the catastrophic Venezuelan economy, although, if there is a total collapse of both the economy and society, it will not in itself have global ramifications.

As often is the case trouble starts in the periphery. So what we are seeing now are not single incidences of a localized problem. Molehills are popping up in country after country and it will soon spread to the West. 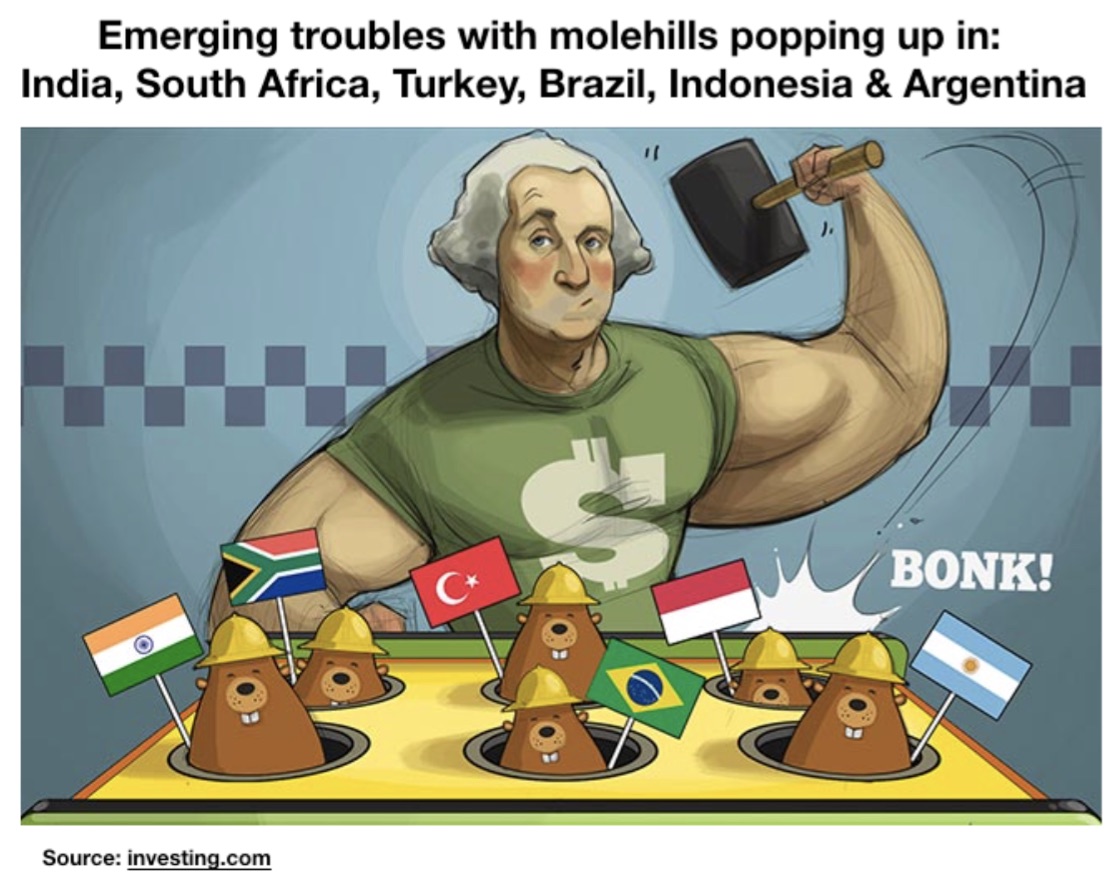 A few years ago I was asked in an interview what were some of the most important things I have learned during a long life in this business. “Patience” was my very clear answer. When you are young, everything must happen quickly. Instant gratification is a major part of today’s culture with most people being restless and ungrounded. It is the same for young and old. No one can sit still for more than a second until they get their iPhone out. Mobile phones are today’s cigarettes, without them people get anxious and twitchy.

Even worse, when young people are together, it is more important to communicate with everybody on Instagram or Snapchat rather than to talk to your friend sitting next to you. And anyone who sends an email or a message expects an instant response. One hundred years ago you wrote a letter to someone on the other side of the Atlantic and it would take many weeks before you had a reply. In many respects quality of life was better then than it is today. But the technological evolution is happening at an ever increasing speed.

Robots and Artificial Intelligence are gradually taking control of everything. I remember Sir Clive Sinclair, who invented the first mass-market computer for under £100 in 1980, saying at that time that eventually computers will be more intelligent than human beings. How right he was since this is now happening with AI. Sinclair also stated that as computers take over our lives, their will be no need for human beings and we will become extinct. He considered that the only difference between humans and computers would be if humans had a soul. So with AI, are human beings making themselves redundant and will that eventually lead to extinction? It’s a frightening thought but not impossible.

Coming back to patience, is a virtue that is sadly disappearing from our lives. When it comes to investment decisions, today it is all about short-termism. But Warren Buffet has taught us that long-term value investing can be incredibly successful. So until AI totally takes over our lives and also makes all investment decisions, patience will remain a very important virtue.

This Is What We Decided After The Crash
In the late 1990s I considered that the risks in the world economy were becoming very dangerous. After the 80% tech crash of 2000-2, we decided that risk still remained very high due to debt and derivatives. The gold price had not reflected this risk and after a 20 year fall from the 1980 peak of $850, gold had bottomed at $250 in 1999 and was still only at $300 in early 2002. We considered that to be a bargain, especially since it looked like gold was turning up. Remember that to be successful in investing you must not buy what everyone else buys, like gold at $800 in 1979/1980 or the Nasdaq at the end of 1999. Whenever the media starts covering an asset class on the front page, then the risk is already much higher. The time to buy is when an asset is unloved and undervalued like gold in 2002.

We Have Not Changed Our Views
Gold then started a six year uptrend until a temporary peak at $1,030 in 2008. The next intermediate top was in September 2011 at $1,930. Gold held up between $1,600-1,750 until 2013 when it came down to $1,200. Since then gold has been in that region for five years. We have not changed our views on risk or gold as protection against this risk. Obviously we have not sold any gold. Patiently we have waited for several years since the last peak. The reasons for being in gold in 2002 have certainly not diminished. Instead, since 2006, risk has increased exponentially with the debt and asset explosion the world has experienced. If we add to that derivatives, pensions and other unfunded liabilities, total risk is now in the quadrillions of dollars.

Sentiment Similar To 2002
Thus, the reason for buying gold today is much greater than in 2002. But the price of gold and silver is not reflecting this risk. Sentiment is similar to what it was in 2002. Gold and silver are again unloved and undervalued. This means that the timing is perfect for acquiring gold and silver for wealth preservation purposes.

To understand what will happen next, let’s go back to the periphery to see what has hit some countries already. A drop in the currency is just one side of the equation. The other side is of course how gold reveals the mismanagement of the country and also protects against a total loss of wealth. 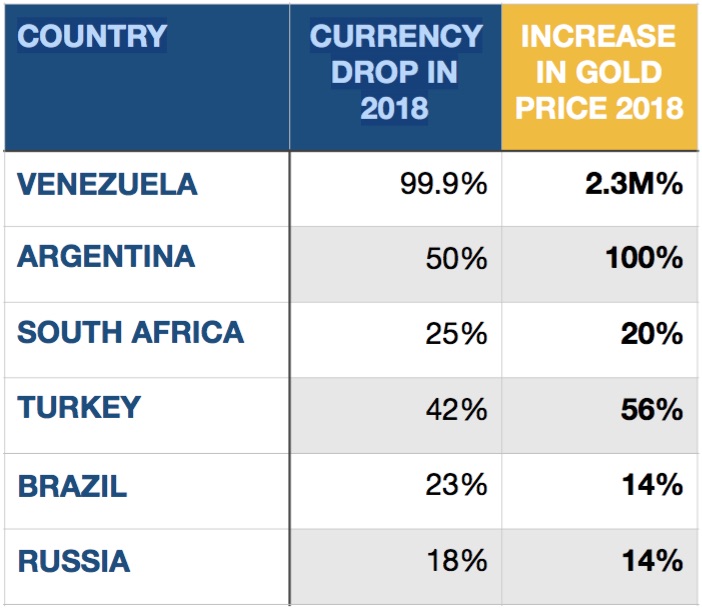 Venezuela is a clear basket case with the currency worthless. But with a gold price at 300 million bolivars, any Venezuelan who owned a bit of gold from the beginning of this year or even better for a few years, would not be in the desperate situation that almost everyone is in currently. The same is true with the other countries. By holding physical gold and some silver, you are not just insuring your wealth from the destruction of paper money but also from a potential bail-in or a collapse of the banking system.

The Consequences Will Be Horrific For The World
We have a number of warning signs from around the world. The Dark Years (link to last week’s KWN piece) have already started in the periphery and will move quickly to the center. Some stock markets, like in the US, are still near their peak. Fundamentally the bubble markets can crash at any time. The technical signals are now indicating that a crash is imminent.

Circling back to gold and silver, they are poised for a resumption of the long-term uptrend and a major move higher. These moves could happen any day. If they are delayed for a brief period, it will make no difference. The world economy will turn this autumn and the consequences will be horrific for the world. For those who would like to read more of Egon von Greyerz’s fantastic articles CLICK HERE.

***KWN has also released the timely and powerful audio interview with legend Pierre Lassonde and you can listen to it by CLICKING HERE OR ON THE IMAGE BELOW.