Today the man who has become legendary for his predictions on QE and historic moves in currencies and metals told King World News that global markets are going through radical changes, but this surprise will soon be mainstream.

April 25 (King World News) – Egon von Greyerz at Matterhorn Asset Management (based in Switzerland):  “Read my lips: No New Taxes” Bush Sr said in his acceptance speech for his nomination in 1988 when he promised no tax rises. As most politicians, he didn’t keep his word. In the 1992 campaign Clinton made a devastating attack on Bush’s pledge and the rest is history.

The simple rule is: Don’t listen to WHAT people say, but HOW they say it. Already 50 years ago the Mehrabian’ model concluded that words only convey 7% of a message, body language accounts for 55% and tone of voice delivers 38%. That is why you should never focus on the words of a speaker since they are the least important.

A WORLD OF QUANTS AND NEURAL SYSTEMS
Automation of investment decisions is a massive growth area. In early 2020 Goldman Sachs had 920 vacancies for engineers, including technologists, quants and data professionals. These vacancies were just under half of all jobs Goldman had on offer.

So gone are the days from over half a century ago, when in the City (financial district) in London stockbrokers drifted in around 10 in the morning, took a 2 hour lunch with gin and tonics and wine plus port with the cheese afterwards. I remember it all well since I spent some time in the City at that time.

A WORLD WITH NO COMPLIANCE AND NO REGULATION
Those were the days when business was done with a handshake rather than a 250 page agreement and 10 legal advisors. There was total trust and a broker’s word was his bond. There was virtually no compliance and insider trading was totally legal…

Today the world of finance is totally controlled by stringent laws and regulations, ridiculously complex compliance and 1000s of lawyers. Trust is gone and it is all driven by fear and covering of your backside.

INVESTMENT DECISIONS BASED ON FED HEADS TONE OF VOICE
Fifty years ago there were no neural networks and no quants. But today this area is developing so fast that soon no humans will be required. A new study by three individuals at the universities in Berkeley, Birmingham and Reading (both UK), has found that emotions in human speech by central bankers not just move stock markets but can be acted upon. They analysed the voices of Bernanke, Yellen and Powell in the press conferences after the FOMC meetings.

Their findings were that switching from negative to positive tone in the voices of Fed Chairs could raise the S&P by up to 200 basis points. For this they built a neural network to compare segments of each audio recording against a database. The database categorises how emotions are reflected in human speech using recordings of actors delivering the text in different ways.

Investment banks have been using similar type of models already but with nowhere near the sophistication of this mode. But this will clearly be their next step. Analysing statements not just from central bankers but from finance ministers, corporate Ceo’s, etc, will become mainstream in coming years.

So let’s turn to the Fed speak in relation to gold. The neural system discussed above did not have the same accuracy for gold and forex as for stocks.

GREENSPAN ON GOLD
That politicians speak with forked tongues is a well-known axiom. The day they put the political cap on, it is impossible for them to tell the truth.

The same with the heads of the Federal Reserve, whatever views the appointee previously had about sound money is completely blown out of the water, once he/she enters the Eccles building.

My colleague Matt Piepenburg wrote about the author of the “Everything Bubble” Alan Greenspan last week. And the “Maestro” is the epitome of someone who lost all his senses as he had to violate virtually every single principle he stood for when he became chairman of the Fed.

In 1966 Greenspan wrote his famous essay “Gold and Economic Freedom” in which he said:

“Thus, under the gold standard, a free banking system stands as the protector of an economy’s stability and balanced growth. When gold is accepted as the medium of exchange by most or all nations, an unhampered free international gold standard serves to foster a world-wide division of labor and the broadest international trade.”

In a 1978 Congress hearing, Greenspan stated:

“In the absence of the gold standard, there is no way to protect savings from confiscation through inflation. There is no safe store of value.”

But as my colleague wrote last week, all Greenspan’s noble principles of sound money were thrown out of the window once he became Fed chief in 1987. Instead he fathered the everything bubble which is now reaching a crescendo.

It is a brilliant scheme that has only been possible with the absence of a gold standard and by creating megatons of worthless fiat money out of thin air.

When Greenspan was Fed head, he had to conveniently suppress his fondness of gold so he developed his own gobbledygook Fedspeak.

He admitted it himself:

“Since becoming a central banker, I have learned to mumble with great incoherence. If I seem unduly clear to you, you must have misunderstood what I said.”

Speaking to a Senate Committee in 1987.

At least he clearly had a good sense of humour!

In a testimony before the Committee on Banking and Financial Services, U.S. House of Representatives July 24, 1998, Greenspan dared to mention his fondness for gold:

“I am one of the rare people who have still some nostalgic view about the old gold standard, as you know, but I must tell you, I am in a very small minority among my colleagues on that issue.”

BERNANKE ON GOLD
The most classic exchange of the role of gold was when Bernanke delivered his report to the House Financial Services Committee in July 2011. At the time gold was $1,560.

When questioned by Ron Paul, Bernanke states that: “The reason people hold gold is to protect against tail risk, a really, really bad outcome”.

Paul goes on to ask: “Is gold money?”

“No” answers Bernanke after long hesitation…… “it is an asset”.

“So why do central banks hold gold” asks Paul – “Well it is a tradition” answers Bernanke.

Bernanke conveniently omitted to mention that people hold gold to protect against a continuous destruction against a collapsing dollar. At the time the dollar had lost 82% in real terms in the 21st century and 98% since 1971.

This is what Bernanke calls tradition. What he doesn’t say is that it is the only money which has survived in history due to the total mismanagement of monetary policy by central banks.

POWELL ON GOLD
The current Fed head also has, not unexpectedly, very little understanding of gold. In a recent discussion at the Bank for International Settlement (BIS) Powell described Bitcoin as an asset that is not backed by anything.

So far I will clearly agree with him. “Crypto assets are highly volatile and therefore not useful as a store of value,” he said. “It is a speculative asset that is essentially a substitute for gold rather than for the dollar”.

So yet another clueless Fed head!

The obvious question to ask is:

Why the hell don’t you sell your 8,000 tonnes (allegedly) of gold and buy Bitcoin instead?? That is the obvious conclusion if Crypto assets are a substitute for gold. Also, imagine the costs you would save Mr Chairman as 8,000 tonnes of gold is $4.4 trillion and would fit on a small memory stick that you could keep in your pocket.

GREENSPAN WITHOUT THE FED GAG
Finally, lets go back to Greenspan after he got rid of the Fed gag and returned to his sound money views. In a 2014 interview he stated:

“Gold is a currency. It is still, by all evidence, a premier currency, where no fiat currency, including the dollar, can match it.”

“Yet gold has special properties that no other currency, with the possible exception of silver, can claim. For more than two millennia, gold has had virtually unquestioned acceptance as payment. It has never required the credit guarantee of a third party. No questions are raised when gold or direct claims to gold are offered in payment of an obligation”.

So there we have it. The now 95 year old Greenspan when allowed to speak freely, knows that in a world filled with quadrillions of debt, no fiat money can match gold.

COMMODITY INFLATION IS RAGING
As KWN has recently illustrated, commodity inflation is raging. Here is a chart of the Wisdom Tree Commodity Index which is up 50% since 2020.

GOLD – BULL MARKET RESUMES
Inflation is likely to run well ahead of interest rates like in the 1970s. This means that negative real interest rates will continue which is very beneficial for gold and silver.

As the chart below shows, gold has now finished the correction since August 2020 and the next (temporary) stop should be around $3,000. 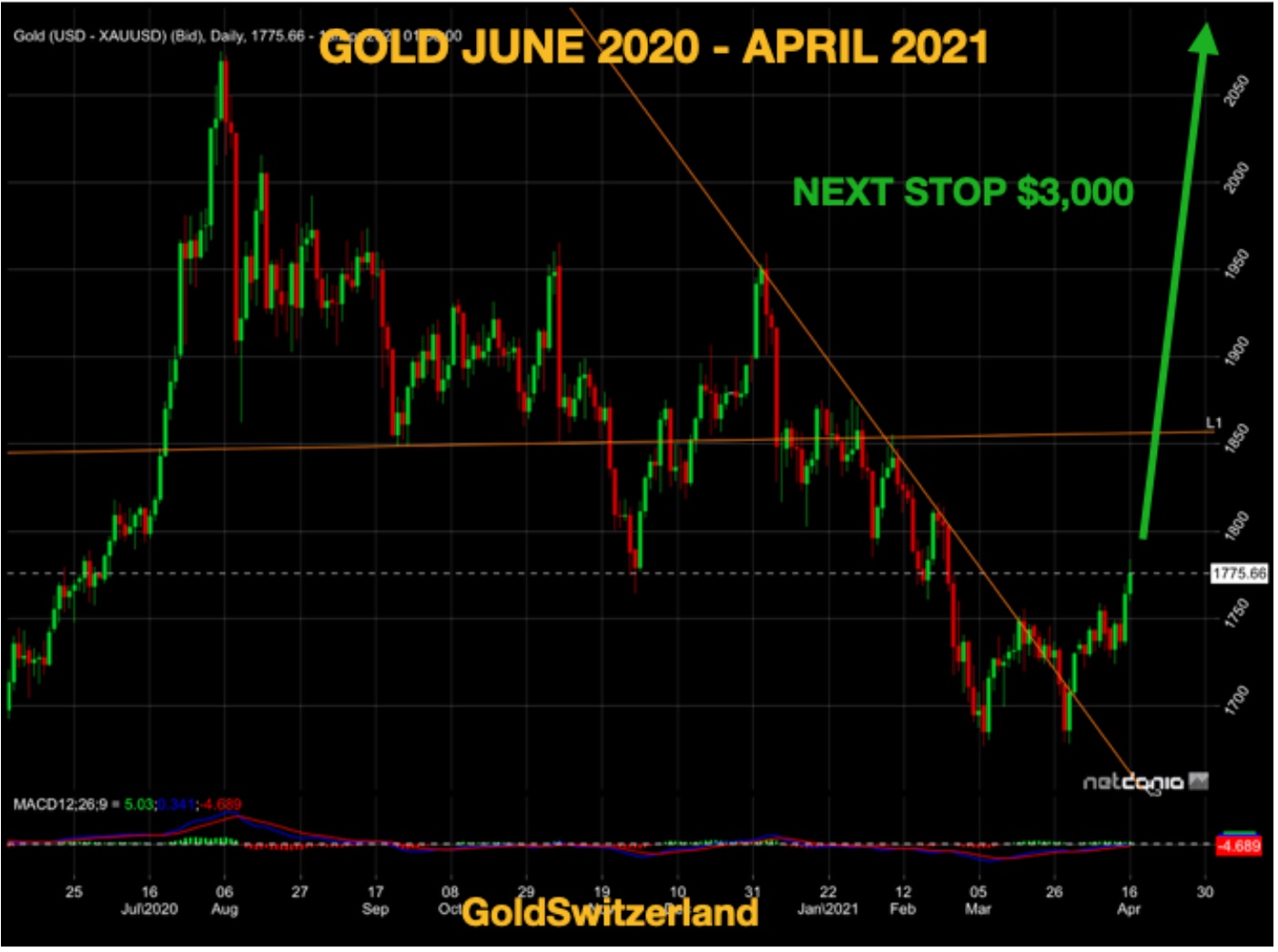 But investors should not worry about the gold price but instead hold gold as protection against the biggest financial bubble in history…This will link you directly to more fantastic articles from Egon von Greyerz CLICK HERE.

***To hear Gerald Celente discuss what shocks to expect in 2021 CLICK HERE OR ON THE IMAGE BELOW.

***To hear Alasdair Macleod discuss why gold and silver prices are set to soar in 2021 CLICK HERE OR ON THE IMAGE BELOW.

Celente – All Hell May Break Loose In Global Markets