Today the man who has become legendary for his predictions on QE and historic moves in currencies and metals said institutional investors are following Warren Buffett into gold as central banks panic.

September 13 (King World News) – Egon von Greyerz:  Embrace uncertainty has long been one of my personal mottos. Because from this moment on, everything is uncertain whether it is your personal health, the stock market or the economy. Sure, we work with probabilities and the most likely is that the sun will rise tomorrow again and that I won’t die today. But we are now at a point in history when trend extrapolation is going to be not only precarious but also both foolish and impossible.

END OF A MAJOR CYCLE
That we are at the end of a major economic and social cycle is totally clear in my mind. But cycles don’t end overnight, if the world isn’t hit by a massive meteorite or nuclear bomb. Whether we are at the end of a 300 year cycle or a 2,000 year cycle, only future historians can tell the world. What is clear, at least to me, is that the end of this cycle started in 1971 when Nixon closed the gold window. Since then global debt has gone up exponentially and now we are in the very final stage of the cycle. This end of the end, that  we are now in, was first evidenced by gold turning up at the beginning of this century.

This significant trend change in gold that started 20 years ago was a clear indicator that we are now seeing the end of the fiat money system.  Even though manipulated through a corrupt paper market, gold still reveals the deceitful actions of governments and central banks.  There is no better evidence than the fall of fiat in this century.

CENTRAL BANKS ARE PANICKING
Central banks are failing and they are panicking. The price of gold is telling us this. Since 2000, most major currencies are down circa 85% against gold. That is a total condemnation of the central banks and their failed experiments in creating unlimited money that has ZERO value. The fall of fiat money started in earnest in 1971 and since then all currencies have lost 97-99% of their value. But as the table shows, only in this century, most currencies have lost more than 80%. 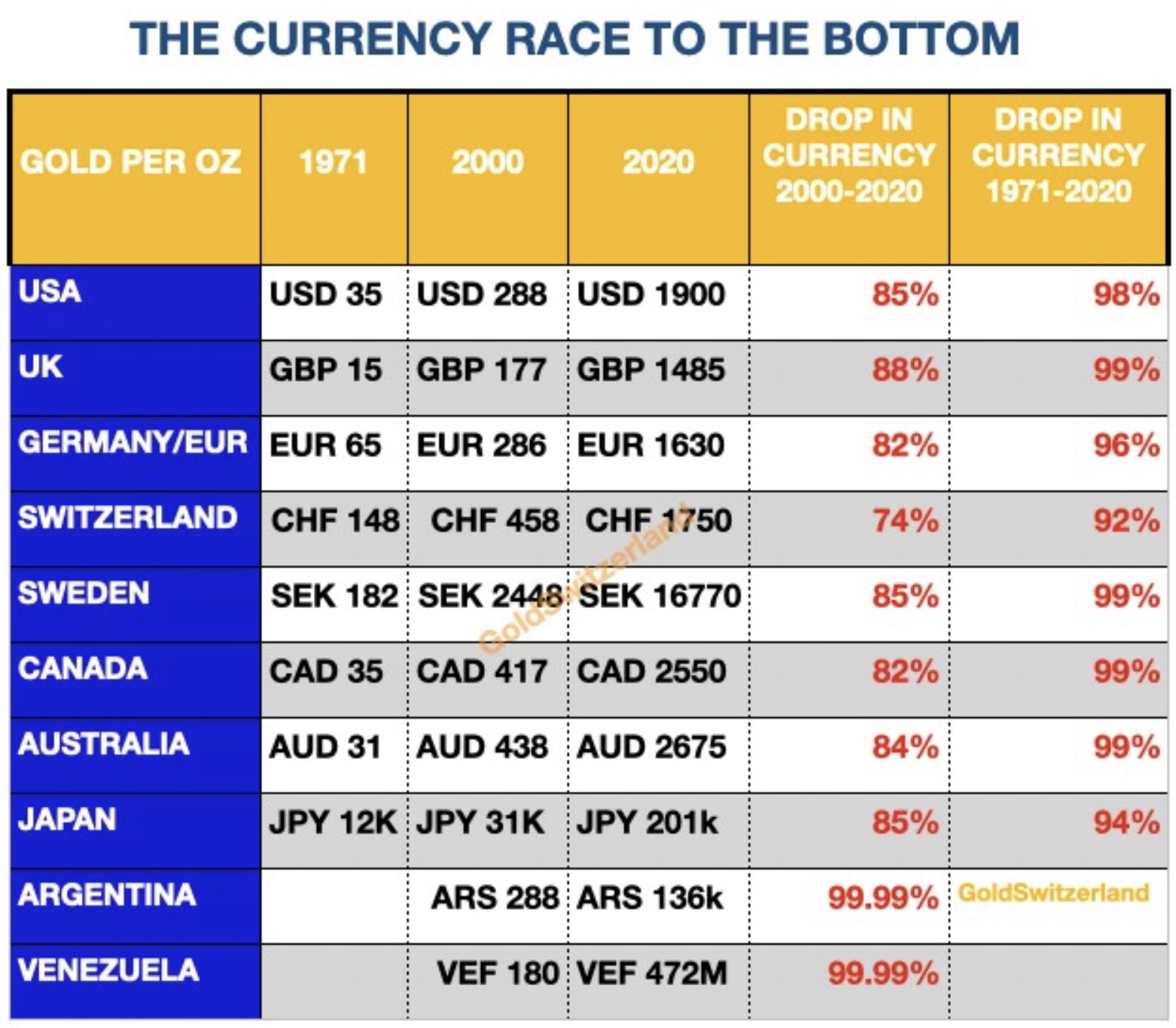 THE US ROAD TO PERDITION
The road to perdition for the US really started in 1913 with the creation of the Federal Reserve – a private bank set up for the benefit of private bankers under the disguise of a national bank. The Fed never had the intention of keeping the money supply and the debt under control. Instead their private agenda was always to create as much money as possible for their own benefit…

It is for that reason that the US federal debt has increased virtually every single year since 1930 when the debt was $17b. There have been 4 years with insignificant reduction of the debt (1947-8, 1956-7). But except for those four years, the US has lived above its means for 90 years. Everybody believes the Clinton administration’s rhetoric that they created major surpluses in 1998-2001. One of the objectives of governments is to mislead the people and the Clinton administration certainly succeeded with that. I haven’t met one American who is aware that there were no real surpluses in the Clinton years. Not only did they report surpluses but they were also talking about totally eliminating debt in ensuing years.

Very few people are aware that during the years 1998-2001 when the Clinton administration reported major surpluses, the actual federal debt increased every one of those years. So fake surpluses were created above the line and the actual deficits below the line were never reported. But the increase in debt revealed it all.

Not only were there no surpluses in the final Clinton years but the pipe dream of eliminating the debt didn’t just go up in smoke, but caught fire. Clinton exited with a debt of $5.7t and today it is 5x higher at $26.750t.

US DEBT DOUBLING EVERY 8 YEARS
When Trump was elected president in November 2016, I published the debt and tax revenue graph below. US debt had on average doubled every 8 years since Reagan rose to power in 1981. Thus, I made the simplistic forecast that 8 years after Trump’s victory, the debt would double from $20t to $40t and after the first 4 years the debt would be $28t. Not many believed that forecast. A $8t increase in debt in 4 years seemed totally outrageous. My forecast obviously included a severe economic downturn and this is exactly what the US is in now. Currently the debt is $26.750t and is up $3.5t since the end of March. An increase by $1.25t to at least $28t by the time the new president enters office in January 2021 seems very likely to fulfill my forecast. 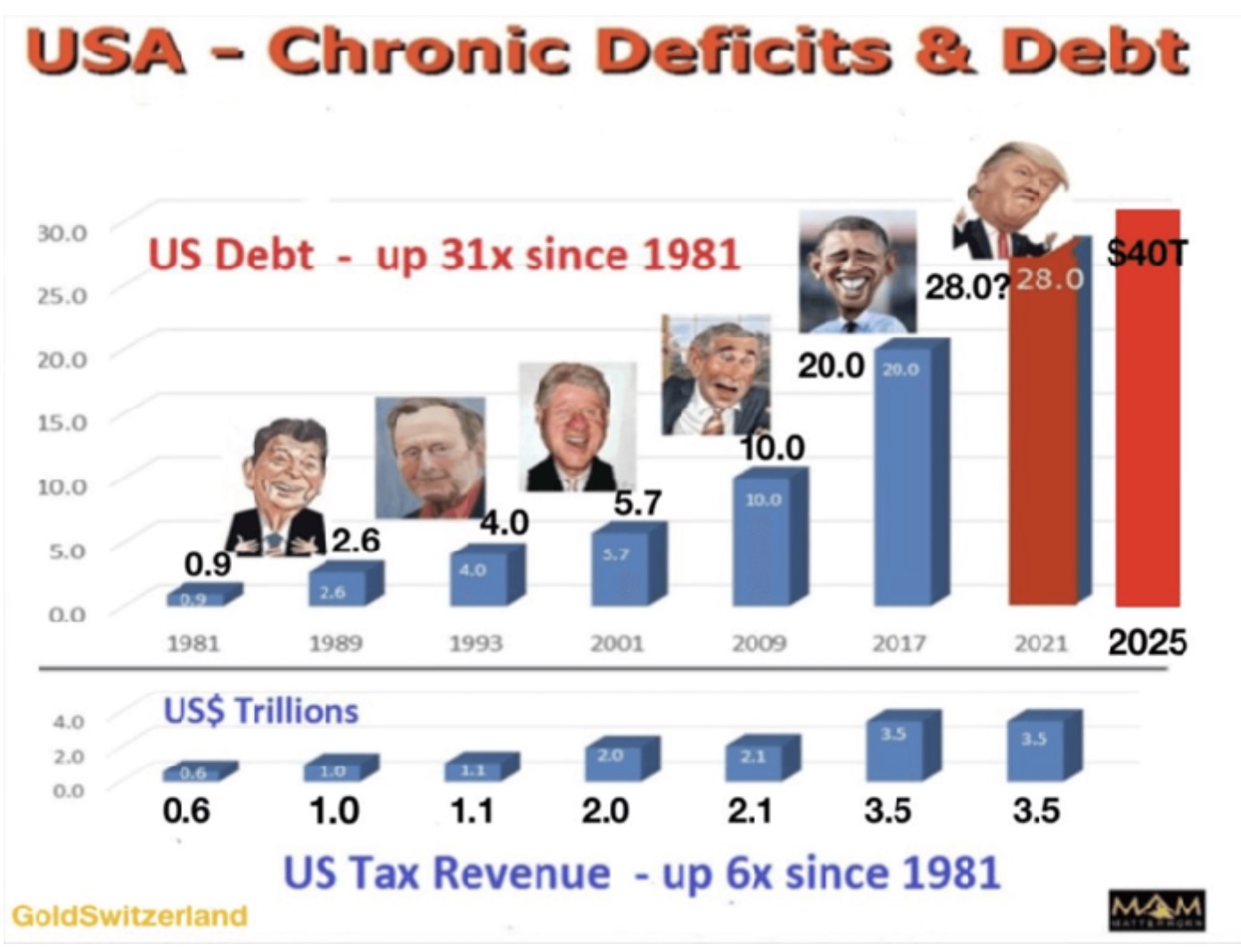 As the graph above shows, tax revenue has increased 6x since 1981 whilst the debt has gone up 31x. So here we have a country that has been running a real budget deficit virtually every year since 1930 and can only increase taxes at a fraction of the rate of the deficit growth. How can anyone believe that the US economy, with the real deficit going up every year for 90 years, has a chance of survival.

GOLD IS THE GUARDIAN OF TRUTH
Yes of course the US could maybe survive for yet a few years by massive money printing, bigger deficits and exponentially higher debt. But the real problem will be the dollar. It is already down 98% since 1971 and 85% since 2000. These falls are measured in real terms which is gold of course. The US government can try to fool the people with the so-called strong dollar policy but gold stands as the guardian of the truth and reveals governments’ deceitful actions.

TOTAL DOLLAR ANNIHILATION INEVITABLE
The petrodollar and a strong military has so far prevented the dollar from total destruction in the last 50 years. Still a 98% loss of value since 1971 is as near annihilation as you can get. And the dollar has now started its final journey to ZERO. It has only got 2% to go, measured form 1971 but we must remember that the 2% means a 100% fall from now.

No one must believe that the dollar will avoid the same destiny as the Denarius in the Roman Empire between 190 and 290 AD or the French Franc’s collapse in the 1720s. There are dozens of other examples where currencies have gone to zero, like Weimar, Zimbabwe, Venezuela etc.

The demise of the petrodollar could also be accelerated by massive improvements in battery technology. The Quantum Glass Battery invented by the Nobel Prize winner John Goodenough could be revolutionary. This battery is capable of storing considerable more energy than the lithium-ion battery and can be charged in a fraction of the time. Several companies are now developing the glass battery including Panasonic, Samsung, Tesla & Albemarle. Virtually every car manufacturer in the world is now producing electric cars. As the Quantum Glass Battery comes into production, this will change the transport industry dramatically and put an end to piston engines as well as the petrodollar. It will also fatally wound the oil industry. In the US for example, 70% of all oil consumed is used for transportation. So it won’t be that long before every car, truck and bus will be battery driven.

INSTITUTIONAL GOLD BUYING
Until recently, virtually no major investor has bought gold or gold stocks in quantity. But Warren Buffett broke the ice with his $600 million investment in Barrick Gold. It didn’t take long for the next institutional gold investor to follow. The Ohio Police and Fire Pension Fund recently announced that they are investing 5% of their $16b fund into gold. That means an $800 million investment in gold. The interesting question is if they are going to buy futures, an ETF like GLD or physical gold. Few institutions or advisors understand that futures or ETFs are as far from physical gold as you can get. I have discussed the dangers of investing in these instruments in many articles and most recently in my article “Buyer Beware – Gold ETF’s Like GLD Own No Gold”.

Many institutional investors don’t yet understand that gold is not just an investment but it is also the ultimate form of wealth preservation. This is why it should not be held in paper form but in physical gold held outside a precarious financial system. If you hold gold futures or a gold ETF like GLD, you don’t hold physical gold but just a promise to settle in fiat money. It is similar to holding lumber futures rather than investing directly into physical forests.

The interesting point is that institutions have until now not understood gold and not known that it has been the best performing asset class in this century. The first two investments into gold this year by institutional investors are likely to be followed by a flood of funds into the gold sector. Institutions are now smelling inflation and must therefore hedge against this. The problem is that there is neither enough physical gold available nor gold and silver stocks to satisfy the coming demand.

THERE IS NOT ENOUGH PHYSICAL GOLD IN THE WORLD
The 21.7 metre cube below represents all the gold ever mined in history amounting to 197 thousand tonnes or $12 trillion in value. Out of this amount, only 21% or 43 thousand tonnes are investment gold. The rest is gold for jewellery, gold held by central banks, or for industrial use. The gold available for investment has a value of $2.6 trillion. 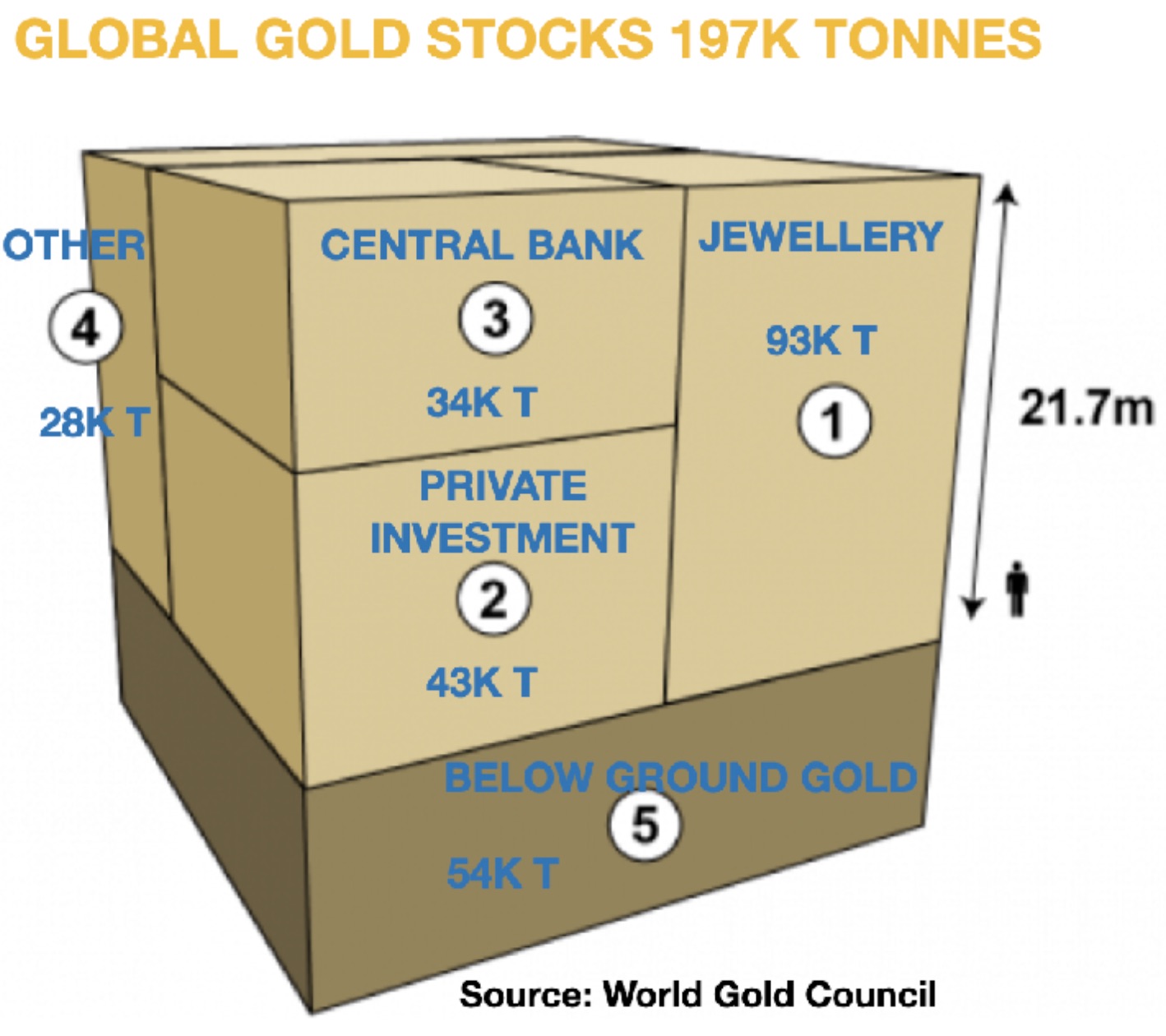 Annual production of gold is around 3,000 tonnes ($187b) and expected to decline. As the cube above shows, the total gold reserves available underground is 54,000 tonnes which is only 27% of all gold ever mined which means that the world has reached peak gold.

In my view, it is virtually certain that institutions will be forced by trustees or their boards to inflation proof their assets by holding some gold. The figures above prove that the gold they need is not available at current prices. The only way to satisfy institutional demand will be with a much higher price. So what will happen is that an institution which decides to invest $1 billion in gold will not get it at the current price of $1,940 per ounce but instead at say 10x that price or more. So instead of getting 16 tonnes at $1,940 per ounce, the institution will receive 1.6 tonnes at $19,400 per ounce for the $1 billion invested.

The paper market in gold is likely to collapse at some point in the not too distant future. There is no possibility to deliver physical gold against the outstanding paper claims which are 100-300x times the available physical. Therefore institutions who are intending to buy gold would be extremely unwise to buy anything but physical gold in their own possession.

The combination of institutional gold buying and private buying will drive the gold price to levels that few can imagine. The $19,400 price example given above is most probably much too low, especially with the amount of money printing that the world will experience.

Gold at $1,940 today is clearly an absolute bargain…For those who would like to read more of Egon von Greyerz’s fantastic articles CLICK HERE.