Today the man who has become legendary for his predictions on QE and historic moves in currencies and metals warned investors to brace for collapsing global stock markets and skyrocketing gold prices.

A Twisted System
July 26 (King World News) – Egon von Greyerz:  The global financial system has for half a century undergone an act of contortion that few believed was possible. This has led to a warped system with fake money and false markets.

Just like the picture of the contortionist, few understand how the world can be in such a contorted position. Or is it all an illusion? 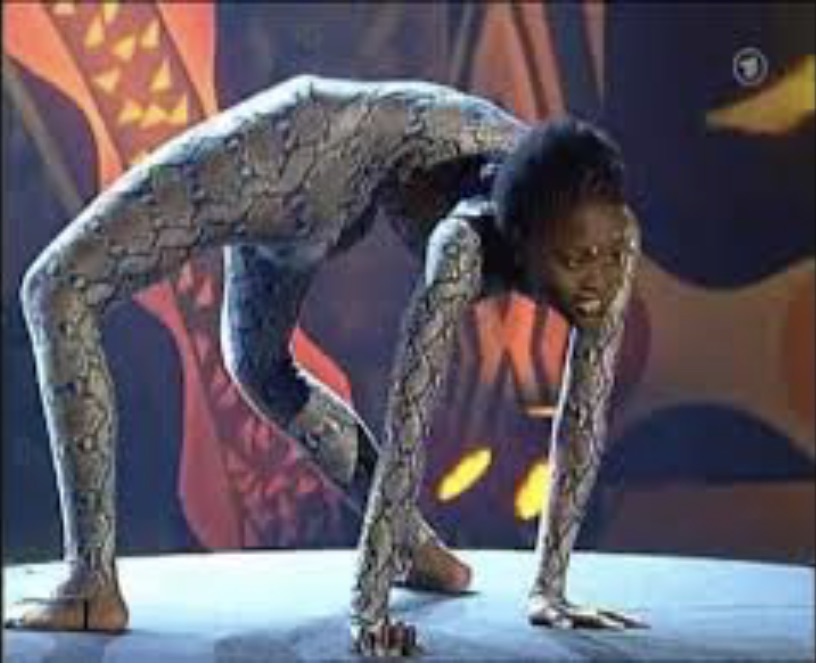 Let’s be clear, it is not just an illusion but a totally deluded and twisted system that can never be bent back into a natural shape again without destroying many vital parts.

VERITAS AND GOLD
You wonder where Veritas, the Roman goddess of truth is in all of this. 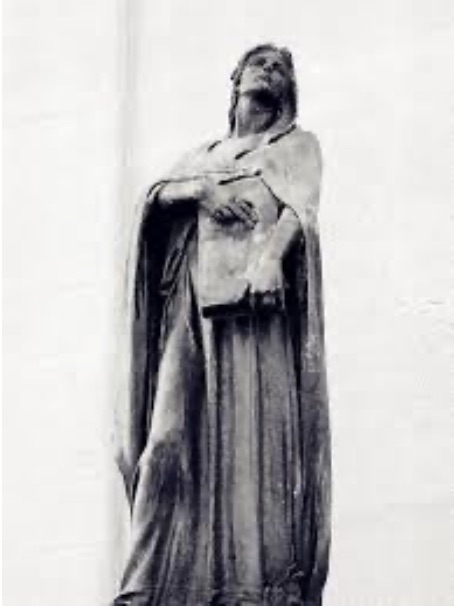 Few people have realised that she has always been there throughout history although not many have noticed her in recent years. In the financial system, gold has always told the truth even when governments try to suppress or manipulate it. All financial systems have over time been destroyed by greed. Not a single fiat currency has survived in its original form.

It was Nixon (not a truth teller) who demolished the current system. Once the gold standard was abolished in 1971, it has been a free for all money printing bonanza for 50 years.

CRESCENDO OF QE
Since August 2019, the Fed and the ECB have orchestrated a crescendo of QE, requiring ever more fake money in a futile attempt to stop the inevitable collapse. As the world is now in the very end game of the current currency system, there had to be a vicious catalyst to finish it off. Sadly that came in the shape of a pandemic which the world is coping extremely badly with.

NEITHER DEBT NOR WEAPONS CAN KILL CV-19
In the beginning, every country thought that they would not be affected. And once they were, they didn’t take it seriously. Also Trump initially thought that the US was too strong and mighty to be severely affected. But neither more debt nor more weapons can beat the invisible CV enemy.

The few countries that did take early stringent measures have so far escaped with much less damage. What is scandalous in this globalist era is that there has been no cooperation between countries in how to treat CV-19. It shows that all these glorious unions, like the EU for example, only work in normal times. When a crisis starts it is every man and country for himself…

The hope is now that a vaccine will solve it all. Firstly, history tells us that vaccines always take longer to develop and test than hoped. So two years seem a minimum before we have any certain results. And even so, the success rate so far of these type of vaccines are normally less than 30%.

In the meantime the number of cases and deaths worldwide are increasing rapidly. And we still have the risk of a second wave. In Spain, for example, it seems to have started already. I doubt that the world and the world economy will function normally a year from now.

Whatever the course the pandemic takes in the next few months, it has already had  major effects on the world. Firstly there is the loss of lives and the long term effects of the disease for survivors that are often severe and chronic. Then we have permanent loss of jobs, businesses closed with major sectors like leisure and travel which will never get back to where they were. Same with retail, town centres, offices etc. And world trade will contract substantially for a very long time.

THE FINANCIAL SYSTEM WAS SICK LONG BEFORE CV
On top of the above problems, is the financial system that was already bankrupt before CV. The combination of massive printing of fake money, credit expansion to unsound debtors and bad debts will be the death knell for the system.

Accelerated money printing will ensue in a desperate attempt by governments and central banks to save the world. But printing worthless money will of course have no positive impact. Instead we will see the end of the currency system as all currencies fall to their intrinsic value of ZERO.

Governments and central banks are doing a stellar job withholding the truth about the destruction of their country’s money. All currencies are down 98-99% measured in gold since the Fed was created in 1913. But also since Nixon closed the gold window in 1971, the US dollar, the Canadian, British, Australian and Swedish currencies are all down 98-99%. – See Chart below. 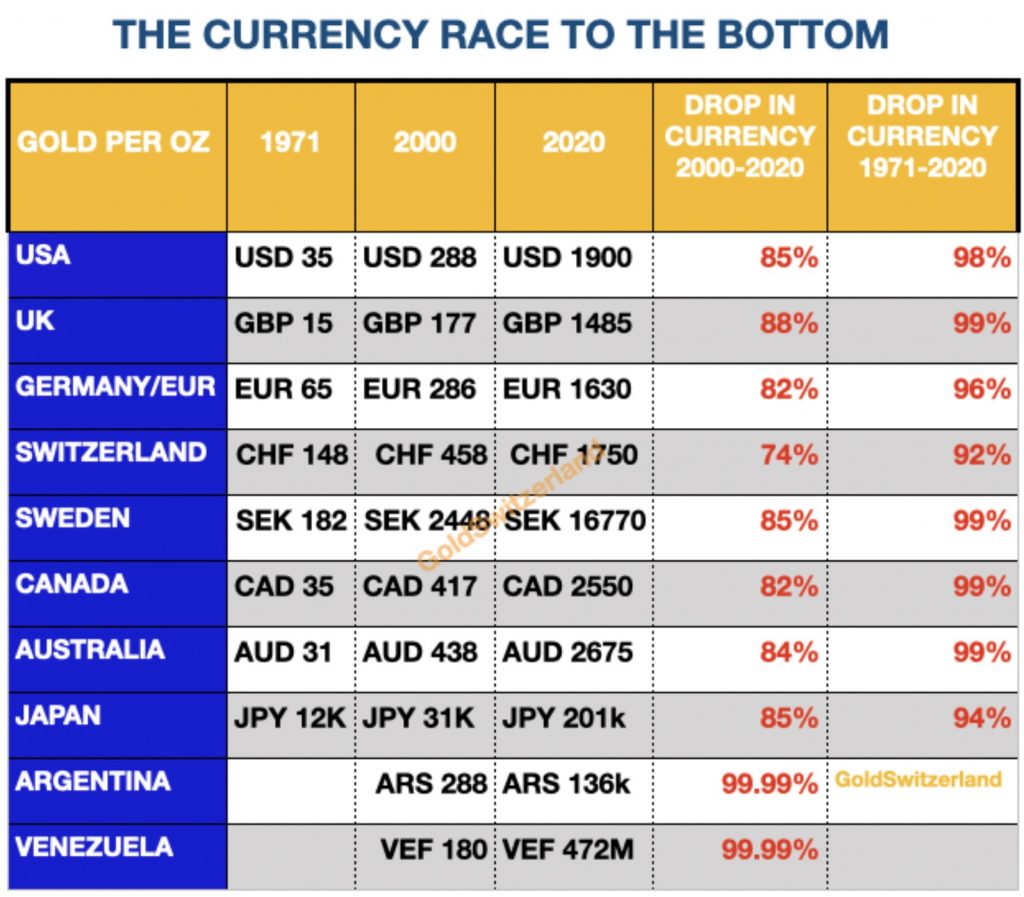 No wonder governments don’t tell their people that they are totally destroying the currency and the economy. The trend has been clear for over 100 years and accelerated since 1971 and turned exponential since 2000.

HISTORY AND GOLD ARE THE TRUTH TELLERS
Again, history tells us the truth (Veritas is always present) but more than 99% of the population swallow the lies that governments and central banks feed them with. It is really so simple, history tells us where to look for the truth and what will happen next and gold reveals governments deceitful actions in destroying the currency and the economy.

So with two simple factors – history and gold – we can find the truth. That governments will not let the people know the truth is obvious. The truth is their biggest enemy. When any honest person becomes a politician, he turns into a spinner of yarns and a liar. In this sense, a central banker is also a politician.

When one of my daughters got married 18 years ago, I even told the 150 guests to buy gold – quite an unconventional part of a father of the bride speech! But then I have never been conventional. Still, I doubt that a single person who attended bought gold then or has since.

Instead people invest in stocks, since they always go up. But no one has told stock investors that is has been a very poor investment. Virtually nobody knows that the Dow for example is down 70% against gold since 1999 (excluding dividends). No conventional journalist or analyst will ever mention this. They are just too lazy to check out the real facts. 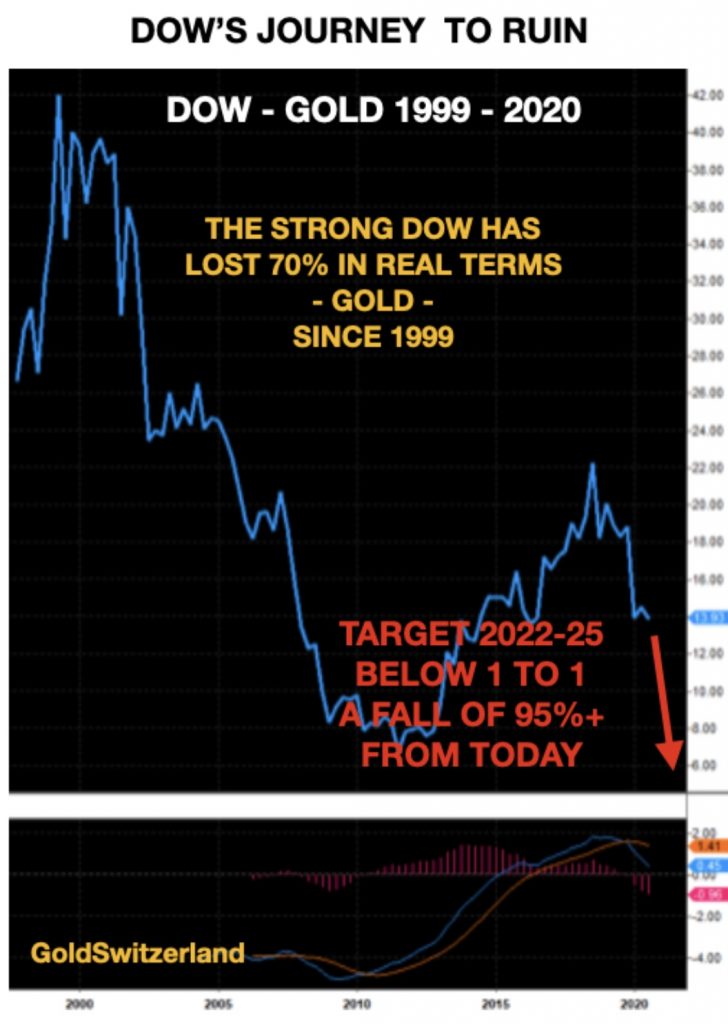 So stock investors including the recent retail investor mania are in for a total shock as stocks and the economy collapse together.

DOLLAR COLLAPSE vs GOLD TO ACCELERATE
Finally a word about the gold price. Last week it reached $1,900 just $20 shy of the all time high in 2011. I have never considered the $1,920 level important since gold has in the last couple of years made new highs in all other currencies, it was always clear that the $1,920 level would be reached.

But we must remember that gold is not going up, instead the dollar is collapsing. Just this century the dollar has lost 85% of its value in real terms – gold. 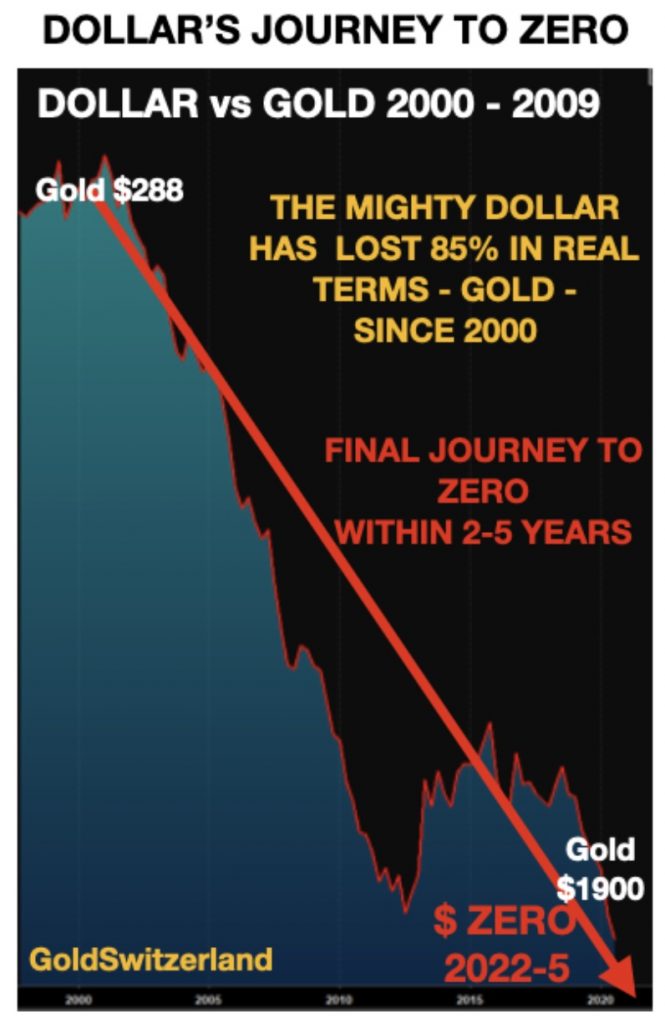 As the dollar reaches its intrinsic value of zero in the next few years, it is obviously totally meaningless to measure gold in dollars since the price in worthless fiat currency will be infinite.

Instead we can be certain that gold will maintain its purchasing power as it has over 5,000 years. But due to the overvaluation of most assets and the undervaluation of gold, gold is likely to perform much better than just keeping up with purchasing power. The shortage of physical gold and the failure of the LBMA system and gold futures markets will be major factors in this as I discussed last week on KWN.

It is fascinating that only 0.5% of global financial assets are invested in the only asset that has held its purchasing power in history. In the next few years, investors — from retail to institutional — will all want gold. It will be the SINE QUA NON investment that everyone wants to own.

Since supply will be extremely limited and demand massive, the only way to get hold of gold will be at prices which will be multiples of the current price, even measured in today’s money. But remember to hold physical and don’t store one ounce within the bankrupt financial system…For those who would like to read more of Egon von Greyerz’s fantastic articles CLICK HERE.