Greyerz – This Will Make The World As We Know It Unrecognizable

As the world edges closer to the next crisis, today the man who has become legendary for his predictions on QE and historic moves in currencies, warned King World News that this will make the world as we know it unrecognizable.

What A Difference A Day Makes
October 14 (King World News) – Egon von Greyerz:  “What a difference a day makes!” Well we didn’t get the sun and the flowers like in Dinah Washington’s song but more like storm and showers. For the ones who don’t remember Dinah, Amy Winehouse made a more recent version of the song. Last week I warned investors again, in the strongest tone possible, of the risks in markets. So what triggered it? Was it the Fed’s interest rise? Or was it the trade war with China? Or maybe it was Kavanaugh?

We mustn’t believe that we can predict the exact time something will happen. Nor do we know what will cause a turn in markets. But what we have known for quite some time is that markets have been extremely vulnerable to a turn…

“With 19 Hindenburg Omens since August (a very bearish technical signal), the US market looks extremely vulnerable. So do most major markets around the globe after one of the longest and steepest bull markets in history. Whether or not we will see a final exhaustive up move or not is irrelevant. Risk is at a maximum and we are very near the start of one of the biggest secular bear markets in history. Now is the time to be safe rather than sorry.”

And so it happened. The Dow fell 1540 points in two days before it closed at a two day fall of 1100 points. After the December/January high, the Dow took 10 months to reach a new high. But that was it! 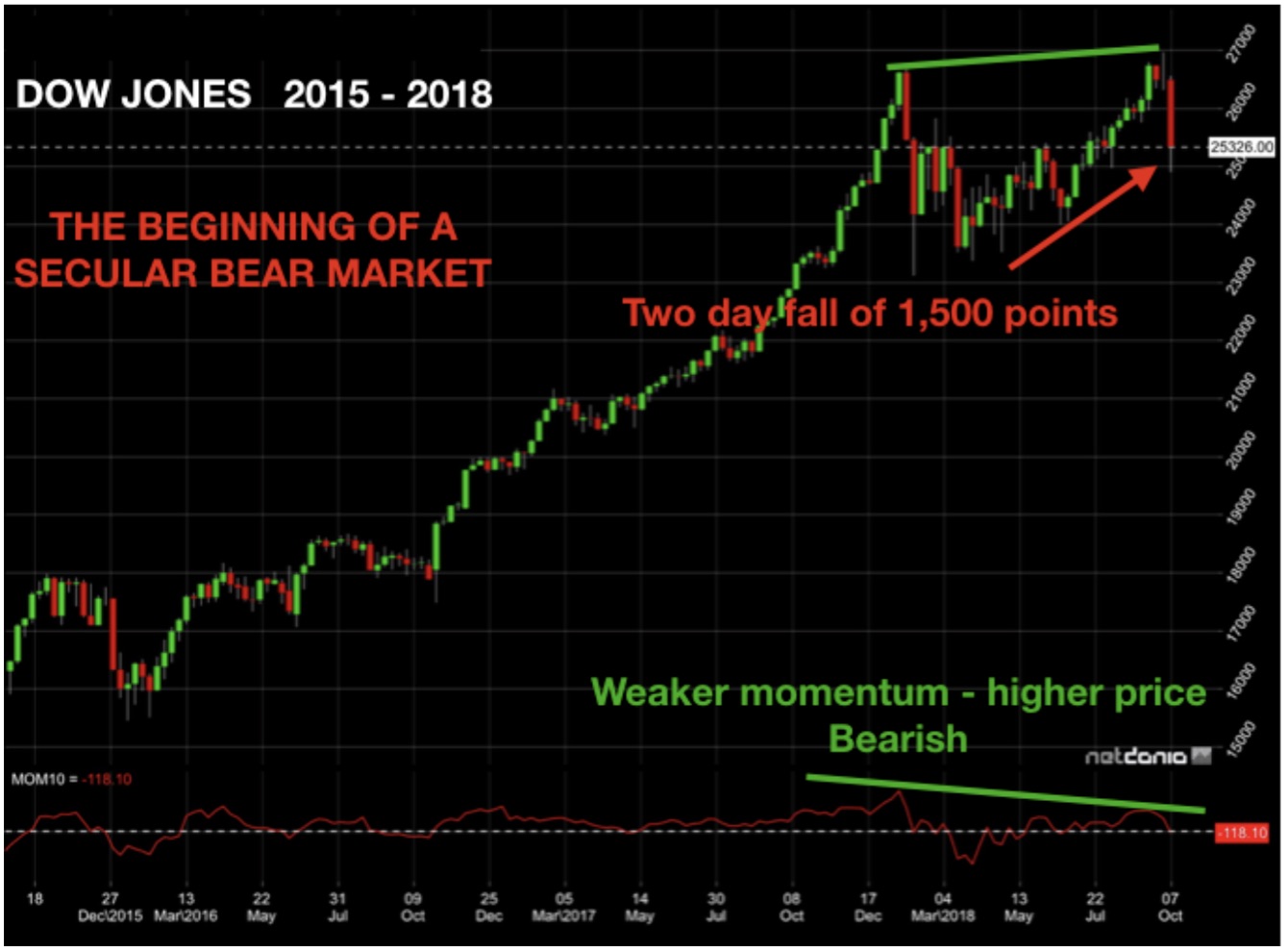 With 79 market indices down last week, my warning was certainly timely. 12 markets were down more than 5%, led by Shanghai, Egypt, Taiwan and Stockholm. As I have been stating many times, market timing is a mug’s game and very few have got the gift of Nostradamus. So the key isn’t to pick the tops or the bottoms but to understand risk. With global risk at historical extremes, anyone trying to chase these markets higher is playing a very dangerous game with the risk of losing it all. You can argue that a 4-5% fall in markets that have gone up by multiples since 2009 is totally insignificant. But most investors are driven by greed and not by prudence. For almost 10 years this bull trend has had no severe, sustained correction, so being a perma-bull has been the right thing.

When the real turn comes, the perma-bulls will not get out after a 5% or 10% correction or even 20%. 20% only takes us down 5,300 points to the June 2017 level. That is nothing compared to the 20,000 point rise since 2009. Most investors will follow the market all the way to the bottom regardless of where this bottom is. Not getting out has worked excellently for the last 86 years. But after the 1929-32 crash in the Dow, when the index lost 90%, you had to be extremely patient to recover your losses. It took 25 years for the market to recover to the 1929 level and that was before taking inflation into account.

No Country Will Escape
But this time it is very different. The bubbles in asset markets and debt are massively bigger today, especially if we include unfunded liabilities and derivatives. Also, this time it is a truly global problem with bubbles on every continent and in virtually every country. So when this downturn catches hold, there will be nowhere to turn to. No country will escape from the coming global contagion of asset and debt implosion. Also, there will be very few individuals who will not be severely affected on many levels whether it is financial, famine, social unrest, security, health, etc.

The likelihood that global markets have now topped is very high. In a multi-decade bull market there is always a chance of another final hurrah but this seems much less likely now. We must remember that markets are just a barometer of the economy. Most people in the world are not affected directly by what happens to stock markets. Of the roughly 7 billion people on the planet, an extremely low percentage has direct stock market investments or properly funded pension schemes.

It now looks like the secular bull market in stocks is turning into a secular bear market that could last for several years if not decades. The stock market acts as a sentiment indicator for what happens in the real economy. No indicator is perfect and stock market moves will be exaggerated in both directions. It is now likely that the world is starting an economic downturn of epic proportions.

Debt Defaults And An Implosion Of Asset Values
The upturn in recent decades has also been remarkable but it has benefited fewer and fewer people. The average worker in the US, for example, has had lower real wages since the 1970s. The illusory improvement in the standard of living in the West is all debt related. It is of course wonderful to improve your standard of living by borrowing money to buy houses, cars, iPads, etc, the problem is that when the music stops these debts will not be repaid. The consequences will be debt defaults and an implosion of asset values.

Last week I saw an example of these bubble assets. I spent some time in the Balearics on the islands of Ibiza and Mallorca, attending a wedding. These islands are full of holiday properties costing up to millions or tens of millions of Euros. And the marinas are packed with 100s of yachts from 50 ft to well over 100 ft. I would be surprised if these properties and boats will have lost less than 90 cents on the Euro by 2025. So hardly a good investment today! 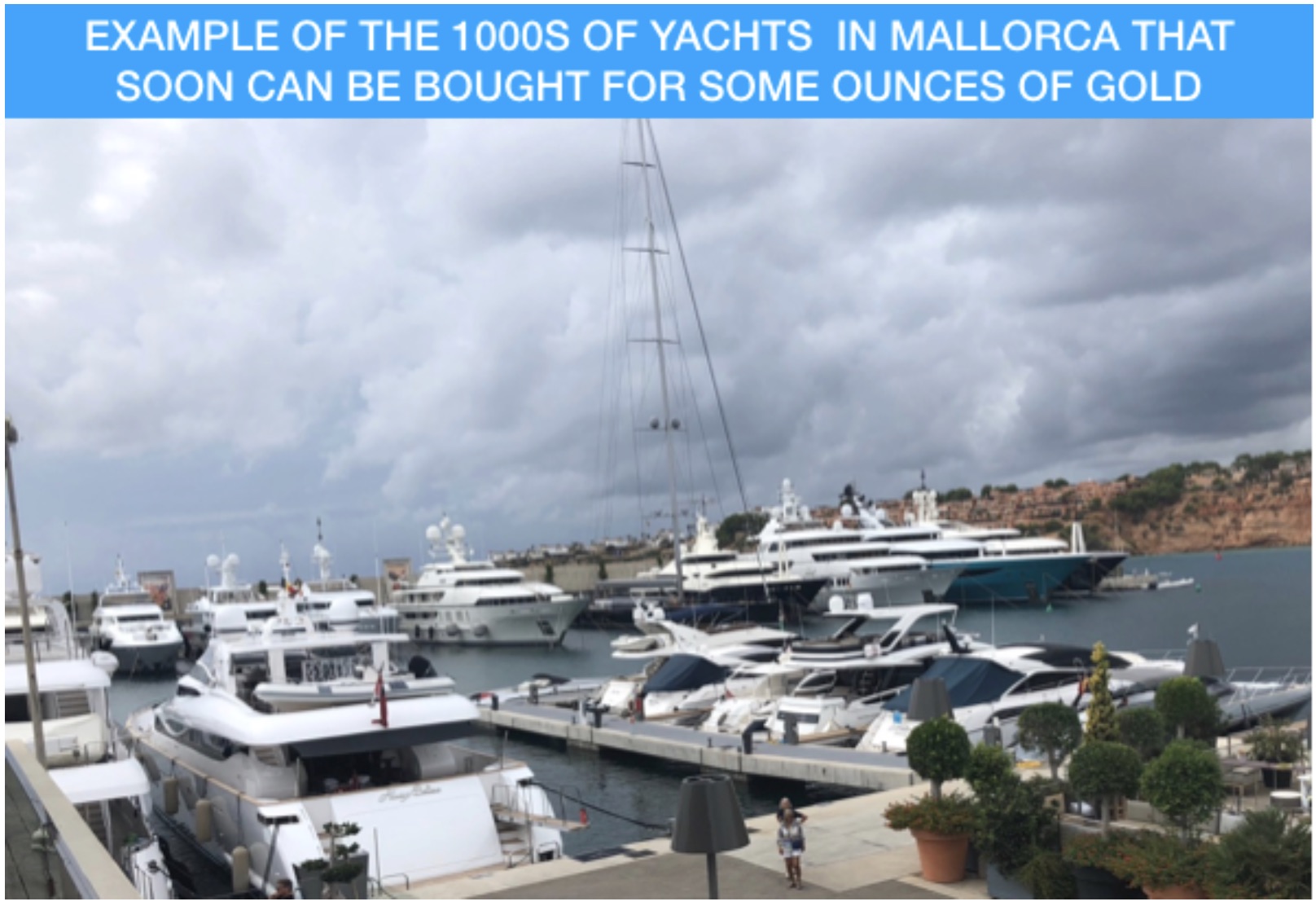 In my article four weeks ago I included the ratio chart of Amazon vs the XAU Gold and Silver stock index. This chart illustrates the massive bubble in consumerism (plus the success of Amazon) versus hard assets. I made this comment:

“The chart below illustrates it perfectly. Since the IPO in 1997 the Amazon stock is up 1,550 times or 155,000% against the XAU Gold and Silver Index. That the reverse will happen and the XAU will be up 155 thousand percent against Amazon by 2025 might be possible even if it is hard to imagine today. What is clear though is that the bubble assets have had their run and their fall will be brutal.”

Now, four weeks later, Amazon has lost 20% vs the XAU. But this is just the beginning. Any consumer linked asset is likely to lose at least 90% against hard assets and most certainly against precious metals in the next few years. 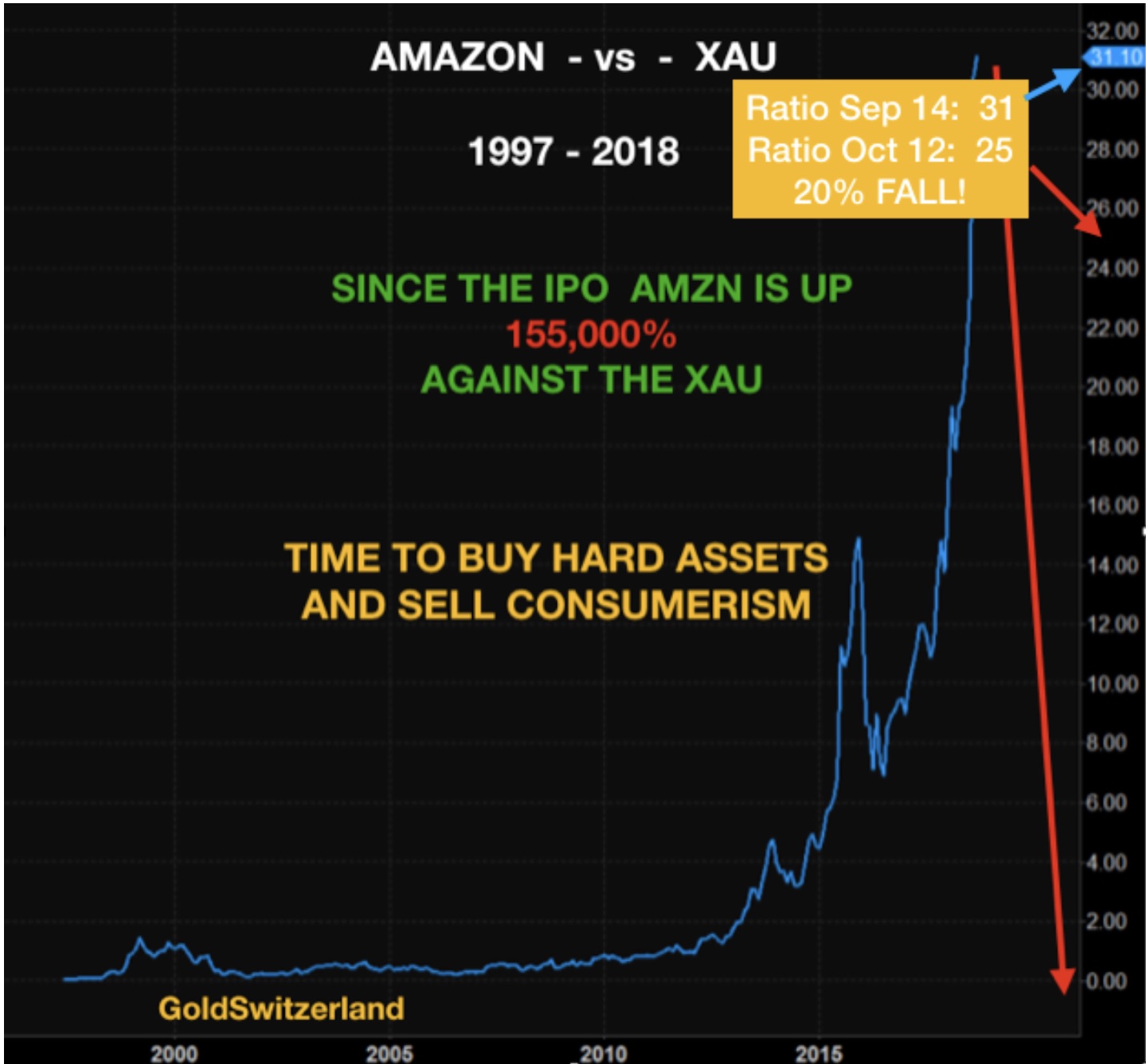 The case for wealth preservation has never been clearer. As we have seen in the last few years, bubbles can always grow bigger. Especially since they have had constant fuel added by way of credit and money printing. But the time of easy gains in markets is now over. With the Fed and other central banks tightening and with the 35 year interest cycle having turned up, the party is over. And soon the world will just reminisce about the good old days. People, governments, banks, and companies, will all struggle to survive the coming years both financially and physically. The so-called good times, which were all built on debt, will soon be forgotten.

The Great Misconception
As I have stated many times, almost everybody in the West and in the East can protect themselves from what is coming. If you have a low income, you buy a gram of of gold for $40 whenever you can afford it, and if you are very wealthy you buy one kilo for $40,000 or one tonne for $40 million. Or you can buy one ounce of silver for $15, one kilo for $500 and one tonne for $500,000.

So it is a misconception to believe that precious metals are just for the wealthy. Virtually everybody can afford to own some silver or gold. This is also what you should tell your children and grandchildren. Because any savings in silver or gold will within the next few years be extremely valuable. Just look at the Venezuelans. The very few who bought precious metals years ago now have a fortune in bolivars, after 1 million percent inflation in 2018.

An Unrecognizable World
The only remedy central banks have when a country runs out of money is to print unlimited amounts of it. The current tightening by the Fed and other central banks will last for a limited period. At some point, when market have crashed and the economy is collapsing, they will again resort to printing vast amounts of money. As always, they will be behind the curve and thus much too late. So the money printing will have no beneficial effect on the economy but will make currencies worthless and most people destitute.

There is still time to take action, but remember we are now on the cusp of a flood of destruction that will make the world as we know it unrecognizable…For those who would like to reach out directly to Egon von Greyerz and GoldSwitzerland to learn more about how you can protect yourselves and your family CLICK HERE.

ALSO JUST RELEASED: John Mauldin – It May Be Time To Buy Gold CLICK HERE TO READ.

Celente – This Seems Unimaginable Even In Today’s Crazy World