As the world edges closer to the next crisis, today the man who has become legendary for his predictions on QE and historic moves in currencies and metals told with King World News that as we enter 2020 the world is standing on the edge of a precipice.

2020 is of course perfect vision or “facilely accurate judgment or assessment” as Webster’s defines it.

Who, 10 years ago, could have forecast that the Nasdaq would have gone up 7x since the 2009 bottom? Or that global interest rates would be around zero or negative for most of the last decade. Or that global debt would double since the Great Financial Crisis started in 2006 from $125 trillion to $260 trillion. And with all that money printing, who would have believed that gold in US dollar would still be below the 2011 peak of $1,920 nine years later?

It all goes to show that forecasting is a mug’s game. But many lucky successful investors would disagree with this statement. So would my good friend Alfred whom I wrote about in February last year.  Alfred has been fully invested in the US stock market since 1945 and has made a fortune in spite of many vicious pullbacks.

Alfred proved that by always being long the market, you outsmart at least 99% of the professional investment managers who unsuccessfully try to time the market and turn over their portfolio frequently.

So Alfred had another good year with the Dow up 24% in 2019. What a good life, you just follow the index, don’t do any analysis, don’t time the market, never sell and just, never read any financial news and just enjoy your retirement. Alfred has done this for, soon, 75 years and is unlikely to change his simple investment strategy. Why should he since by just investing his savings he now has a portfolio today worth $16 million (chart shows $14M)? Will Albert be lucky for another year? As always, we will know afterwards. 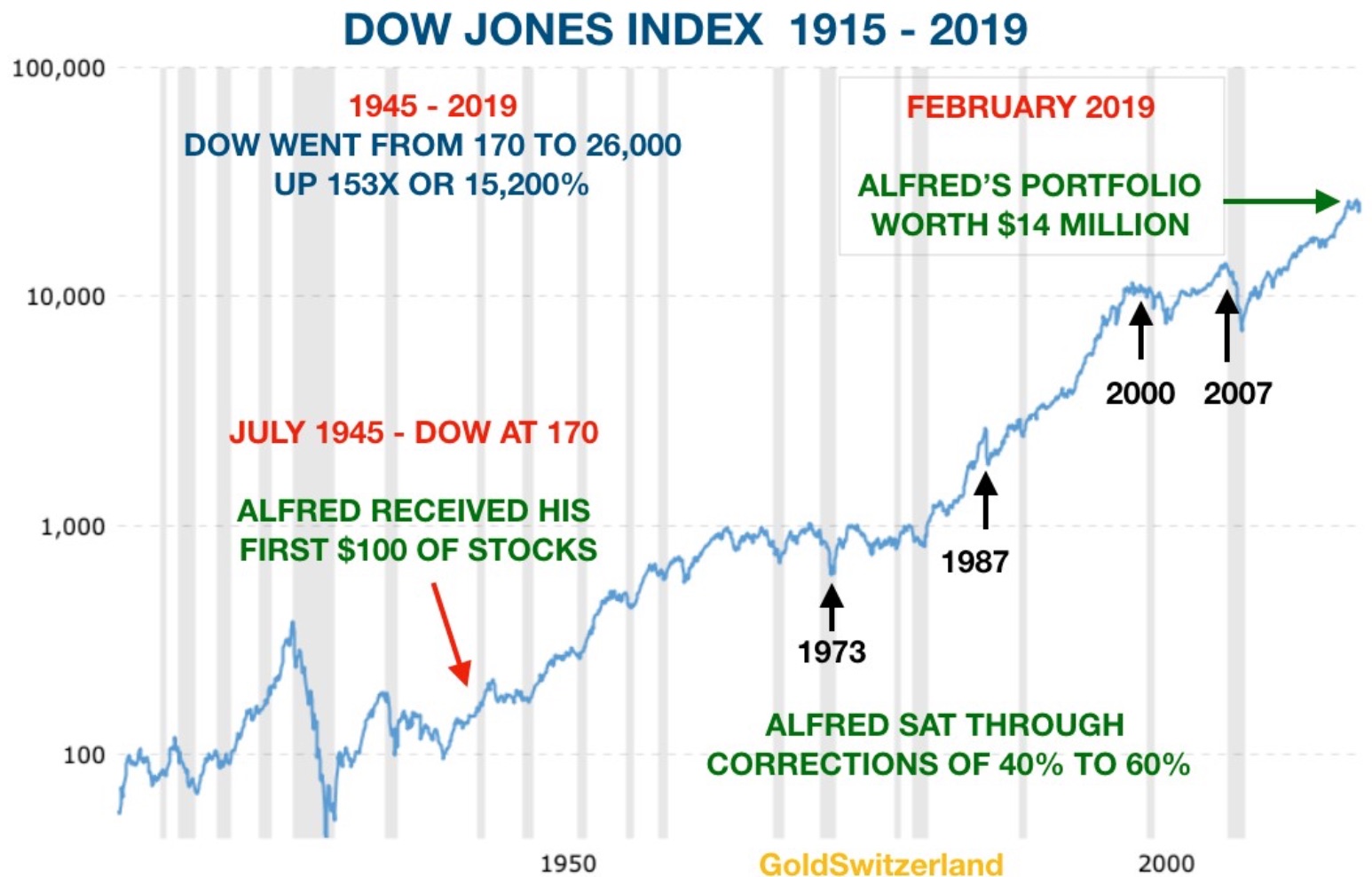 Many experts are sitting down at the beginning of the year and of the decade to make intelligent projections. I shall try to resist being a mug this time. There are so many others who will do this and most of them unsuccessfully. This still won’t stop me from giving some hints at the end of the article.

But I believe, like many others that have views about market direction, that the most important factor for this coming decade is not to make money but to survive financially.

The 2010s was a decade of fantasy – fantasy markets, fantasy valuations, fantasy money, fantasy debt and fantasy central bankers. For the people who have benefitted from this fantasy world, it clearly seems very real. Will the fantasy world continue for yet another decade? That we will know by 2030. The majority of all investors who benefitted in the 2010s are clearly not going to change their stance at the beginning of the 2020s.

Traders are aware that the most dangerous period in their trading is after a major win in the market. That is the time when they think they are masters of the universe. There are many examples of this. Take hedge fund manager John Paulson who after his subprime mega gains has lost the majority of his assets, going down from $36 billion at the peak to $8 billion.

It will be the same today for most investors whether they are in stocks, bonds or property. They now believe that they are totally invulnerable and know it all. The same thing happened during the Nasdaq boom in the late 1990s. In early 2000 every investor was an expert on tech stocks. Two years later with the Nasdaq having crashed 80%, there was not a tech expert to be found.

Those years are examples of peaks with subsequent falls in the various indices of 50% to 90%. We must remember that these were average declines and many companies disappeared. In 1973, I worked for Dixons Group in the UK and can vividly recall how my first options went from £1.27 to £0.09, a 93% fall. The company was financially strong but being in consumer electronics, it crashed a lot more than the market. Still, Dixons recovered and by the 1980s we had built it to a FTSE 100 company and the dominant consumer electronics retailer in the UK.

After a long life in business and in markets, I have learnt that it is virtually impossible to exactly time tops or bottoms. As the economist John Maynard Keynes said, “The market can stay irrational longer than you can stay solvent.” 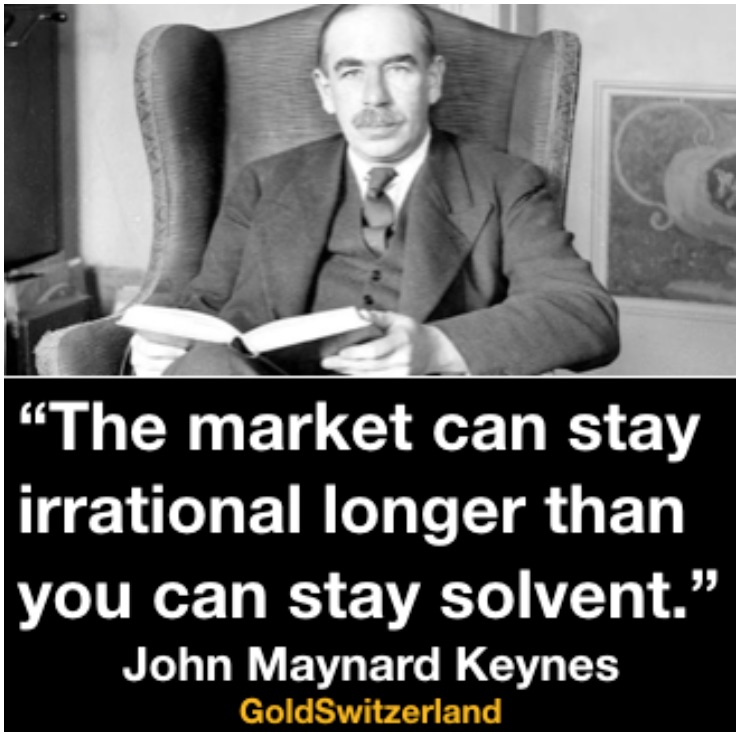 So rather than focus on if we are at the cusp of a crash, it is much more important to focus on risk. Firstly, if we look at market risk, most assets today are in bubble territory whether it is stocks, bonds or property. On any valuation criteria, these markets are massively overvalued. But we must remember that bubbles can always grow bigger, as Keynes said.

Investors Uber-Confident
A number of factors hold markets up and one of the critical ones is confidence. And for quite a while, investors have been in uber-confident mood. This has been supported by central banks led by the Fed but also other central banks like the ECB, BoJ (Bank of Japan), and the SNB (Swiss National Bank). With incessant money printing or QE, combined with asset purchases, these banks have supported stock markets throughout the 2000s.

From most investors point of view, there is no reason to believe that central banks will stop supporting the markets. And the central bankers know that markets are in constant need of liquidity injections to stop them from crashing. So markets are confident that the vicious virtuous cycle of more QE and higher prices will continue ad infinitum. And as long as this confidence can be maintained, markets will stay high.

But extremely overvalued markets supported by the printing of worthless money is not a sign of health. Instead, it is a false market bolstered by fake money. And very little is required to break it.

Below is a time bomb with 3 dozen reasons to worry. Any single one of these risk factors is enough to trigger a market crash. The catalyst could be Iran and the risk of a major global conflict or it could be trade wars, or a bank collapse like Deutsche or a crashing US dollar. But a catalyst doesn’t have to be a major event. In a fragile market, it could be a small bank going under or even a political event. 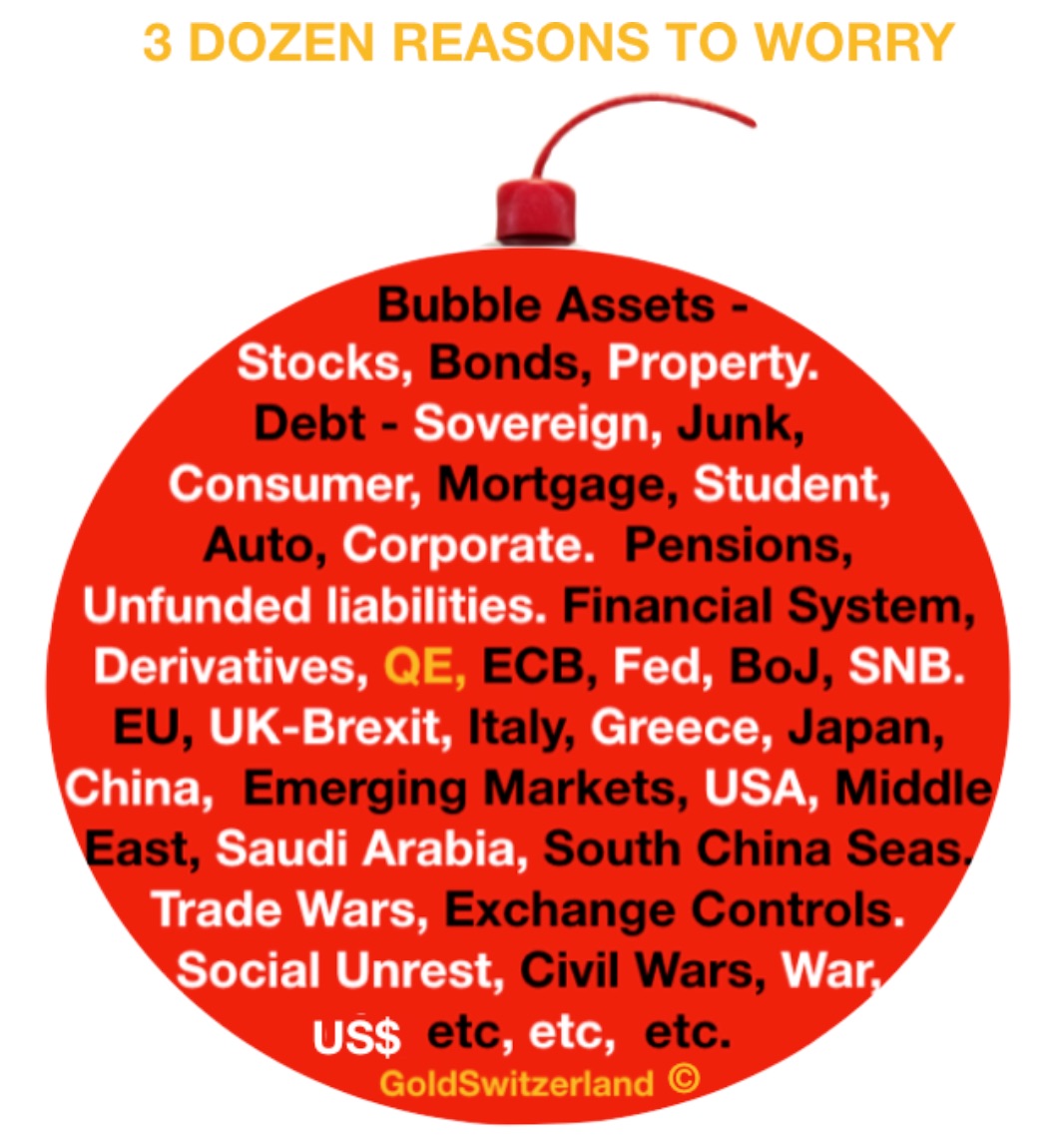 The Coming Crash Will Be Monumental
It serves no purpose to try to figure out what the trigger will be. Instead, investors should focus on risk. With unprecedented global risk and overhanging global debt plus derivatives and unfunded liabilities exceeding $2 quadrillion, the coming crash will be monumental, whenever it starts.

And except for Deus ex Machina (god saving the plot in the ancient Greek plays), there is no solution. We cannot solve a debt problem with more debt, and making all interest rates negative will just make it worse since neither banks nor savers or pensioners would survive.

So what is the solution? Well, I am 100% confident that there is no solution. As von Mises said, “There is no means of avoiding the final collapse…”

With the world facing the risk of the biggest wealth destruction ever, what can they do about it. Regrettably, most people will do nothing until it is too late. They expect to be saved by central banks yet again, but this time the banks will be powerless. Further money printing will be a pointless exercise and will just cause hyperinflation. So many investors are likely to lose 75% to 99% of their wealth in the next few years.

The best insurance against collapsing paper wealth is clearly hard assets. Throughout history, physical gold has always been the ultimate protection against political or financial risk. And this time won’t be different from history. Sadly, very few people study history or they believe that it is different this time. But it is seldom different and we all have a lot to learn from history. We have had a 100 year period based on debt and printed money, which has created ever increasing paper wealth. Thus, most investors will see no reason to change tack.

Less than 0.5% of investors currently hold gold or gold stocks. Very few will buy precious metals when the crisis starts. As gold goes over $2,000 and silver above $50, more investors will start to be interested. The problem for new investors is that gold and silver  and precious metal stocks are a minuscule market. Increased demand will not create more physical gold and silver since we have reached peak production. There is of course around 170,000 tonnes of gold and gold jewelry in the world but virtually none of that will be available at these low prices.

To exacerbate the problem, the futures markets in gold and silver and the interbank market have massive paper positions in (paper) gold and silver. Once paper holders demand physical delivery, gold and silver prices will explode since there are no physical metals behind the mountains of paper gold and silver. We have seen panic in the gold market before like in China in 1948. 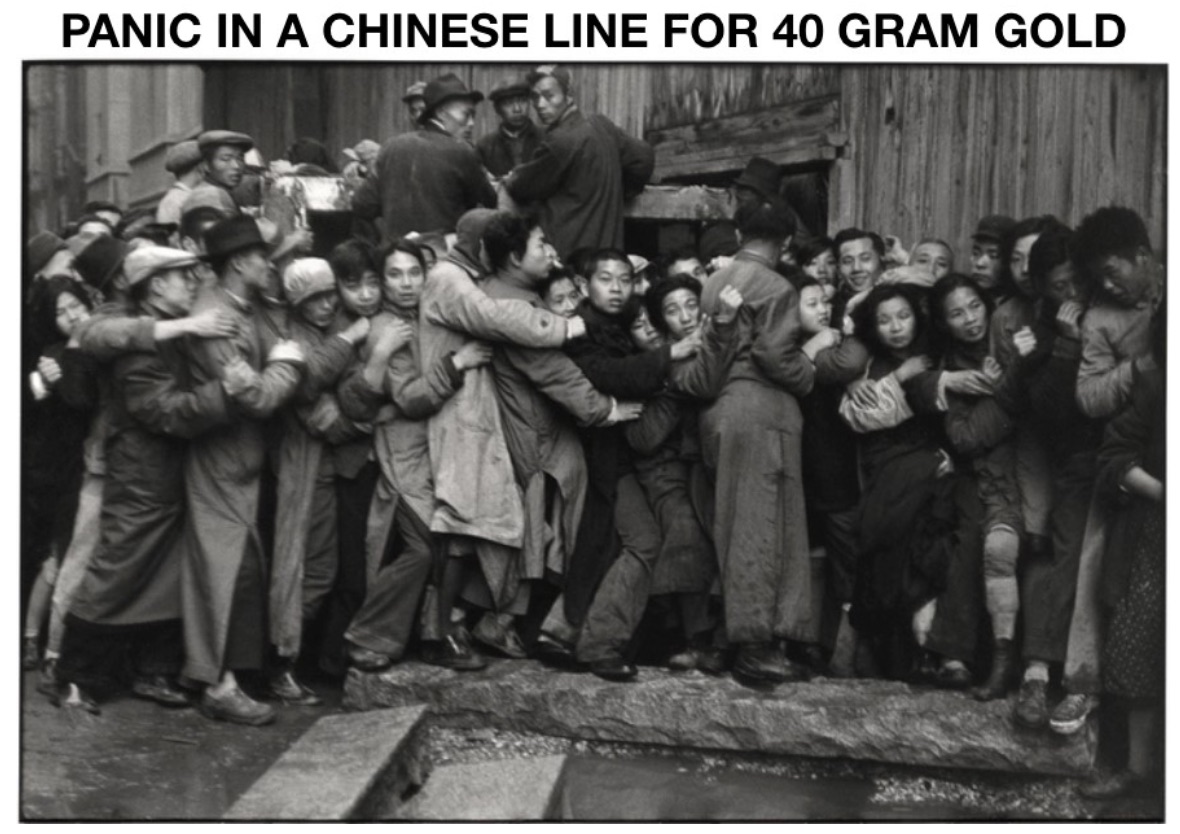 We have had a bull market in precious metals since 2000. There have been long periods of correction but the latest correction is now behind us and the move that has just started is likely to be very strong. Gold is at all time highs in most currencies except for Swiss francs and US dollars. It should not be long before the 2011 high of $1,920 will be exceeded on the way to much higher prices as the dollar collapses. And silver is likely to go up 2-3x as fast as gold.

So when will all of this start? Well, the precious metals have started their move already and could move fast. What about stocks? As somebody said, “don’t tell me why stocks will go down but tell me when”. Based on my risk assessment, markets could turn at any time now. And based on technicals, the end of the secular bull market is imminent as I have been stating in my last few articles.

Whether the global economy will turn down early in 2020 or the euphoria will continue for a while is irrelevant. What we do know is that risk is at a maximum and therefore it is absolutely critical to protect your wealth. Throughout history physical gold has acted as the best financial risk insurance money can buy. It won’t be different this time…For those who would like to read more of Egon von Greyerz’s fantastic articles CLICK HERE.