What A Wild Day
May 12 (King World News) – James Turk:  Today started off pretty wild, Eric, when the report came out this morning that inflation is at a 13-year high. That’s not news to anyone who has gone to the supermarket, a lumberyard or the gas station recently.

But the immediate reaction was that the dollar soared. The thinking was that high inflation would mean that the Fed would have to do what Paul Volcker did when he was Federal Reserve chairman, which is raise interest rates to fight inflation. That would make holding dollars more attractive than holding tangible assets.

So the prospect of rising interest rates hit the precious metals, which sold off along with Treasuries. But then there was a knee-jerk reaction..

The market realises that the Fed cannot raise interest rates because the US government deficit is already soaring. Higher interest rates would make the deficit even worse by increasing the government’s interest expense burden.

Central Planners Intervene In Gold Market
So things quickly reversed, with gold and silver making new daily highs and the dollar falling to its low for the day. Then we got some price capping in the precious metals and what looks like intervention to keep the US Dollar Index above 90.

Importantly, T-bonds and T-notes did not reverse course. They continued to sell off. Even though the Fed is buying $80 billion of them every month, holders are dumping them because rising inflation is going to get worse.

Gold open interest expanded by more than $8 billion of new shorts selling into the buying coming from new longs, and that is just on the Comex. We don’t know how much forward selling was done in the over-the-counter market.

A jump like that in OI cannot be explained solely by hedging. Short-selling the precious metals has to be a major part of this huge OI jump. But with inflation at its highest level in 13 years and rising everywhere, who, other than central planners, would bet $8 billion by selling into all the new buying? No profit motivated trader would do that.

The Good News
Nevertheless, the good news is that we are getting some upside follow through in the precious metals. It is the key ingredient needed to break out of the trading ranges in which gold and silver have been mired since beginning their corrections nine months ago after last year’s big gains.

Since their low price in March, gold is up about 9% and silver has done even better. Silver is up about 14%.

I like the picture gold is painting in this chart of the spot price in New York. 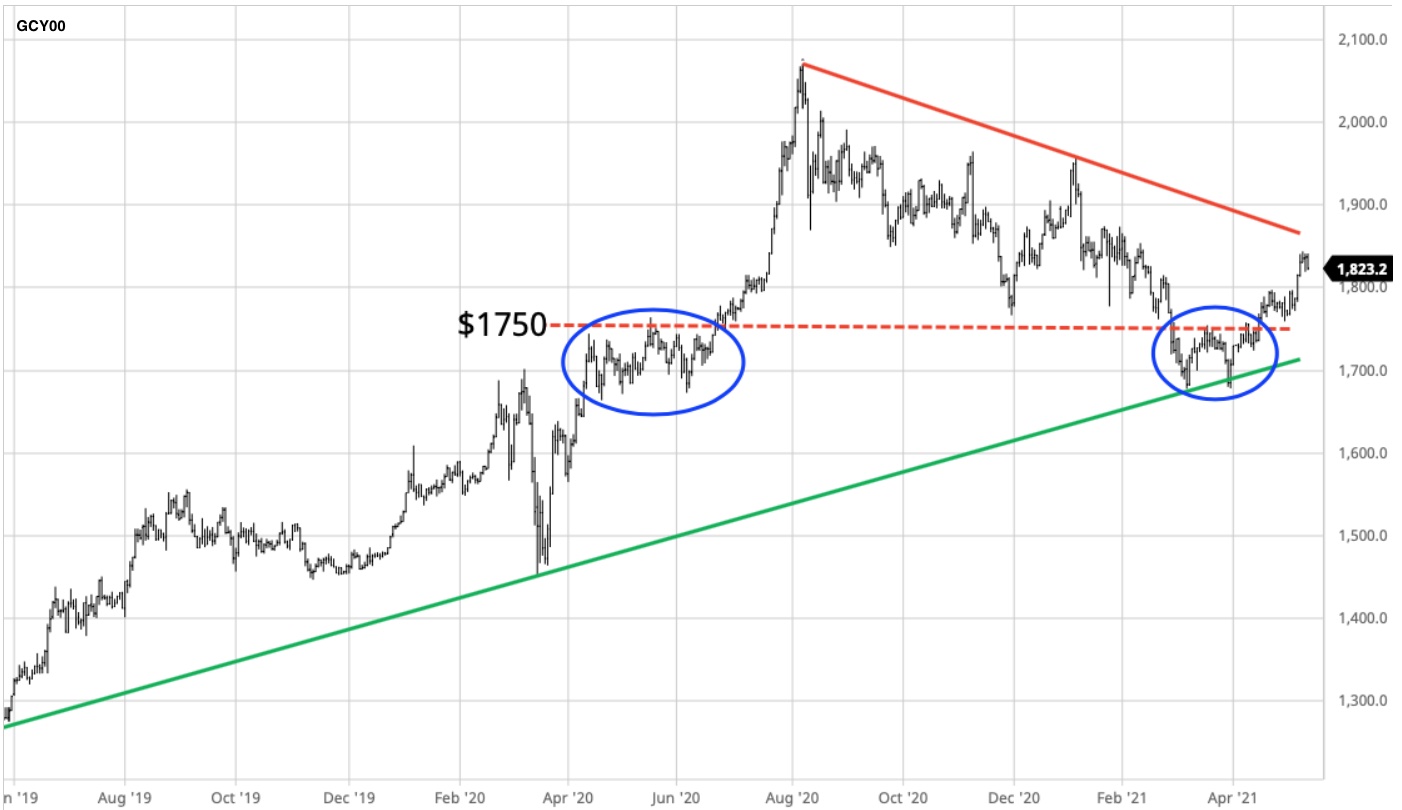 First, the green line marks gold’s long-term uptrend, which held the test of support back in March. Second, the circle on the right continues to follow the pattern of the other circle before last year’s big jump in price. Sometimes history repeats.

Gold & Silver Will Break Out On The Upside
Gold needs to hurdle $1870, which is overhead resistance and the red downtrend line. That could happen any day because it is just a chip-shot away. And with inflation worsening, we can expect greater demand for physical metal, which I expect will soon be driving precious metal prices higher.

Over the next few days, we may get some more backing and filling. But with inflation rising all over the place, I suspect that it won’t be long before gold and silver break out of their 9-month trading range to the upside.

***To hear one of legend Rob Arnott’s best interviews ever (oversees $160 billion), where he discusses how investors can protect themselves from skyrocketing inflation and much more CLICK HERE OR ON THE IMAGE BELOW.