Fund managers are worried about a 2008-style collapse. Egon von Greyerz also cautioned that damage to the global financial system can no longer be concealed.

Damage Can No Longer Be Concealed
July 19 (King World News) – Egon von Greyerz:  The current problems in the world did not start with Covid in early 2020, but with irreparable damage to the financial system which central banks couldn’t conceal beyond August 2019. Precious metals are in a small correction of a major long term bull market, which is the inevitable collapse of the currency system. Gold might come down initially with stocks by $100 or so but the next major move of gold up will be both substantial and long term… 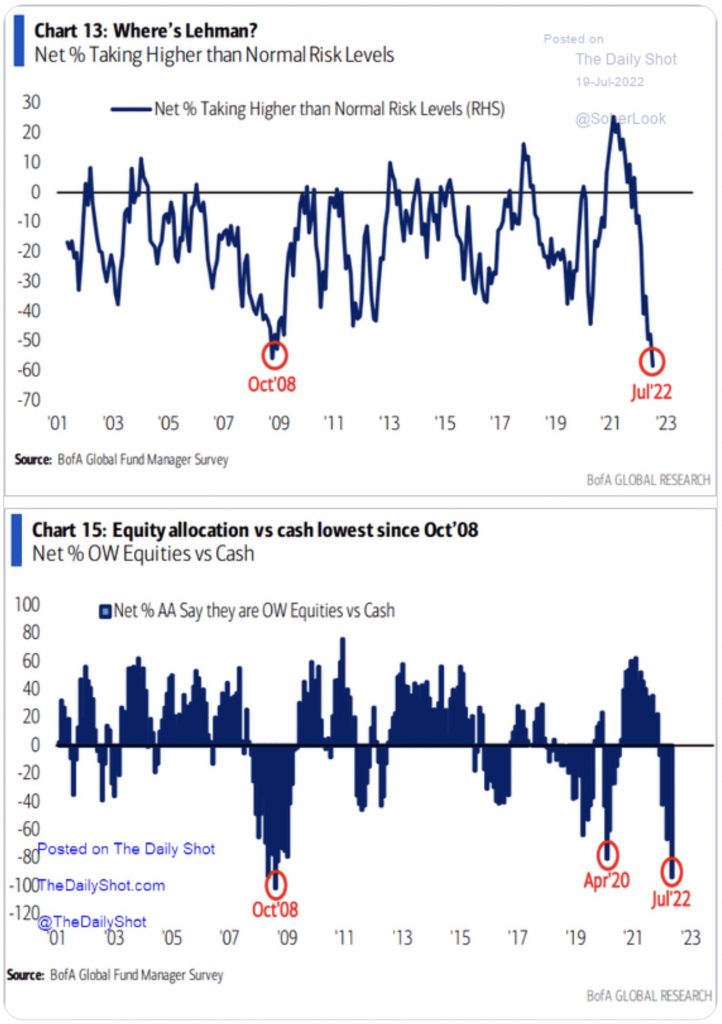 Cayman Islands Accounts Buying US Treasuries While China & Japan Dump
Peter Boockvar:  Foreigners bought a net $88.9b of US notes and bonds in May, the biggest monthly amount since March 2021 and brings the year to date buying to a large $297.2b. The source and changing ownership though are key to watch. It was the Cayman Islands where most of the buying came from, totaling $75.8b. In other words, hedge funds and insurance companies were the big buyers. Japan and China, the two largest foreign holders, continue to pare down their holdings. Japan shed another $1.6b of notes and bonds, the 4th straight month of sales and takes their holdings to $1.21T. China sold $15b worth and now holds under $1 Trillion at $981T, the least since 2010. 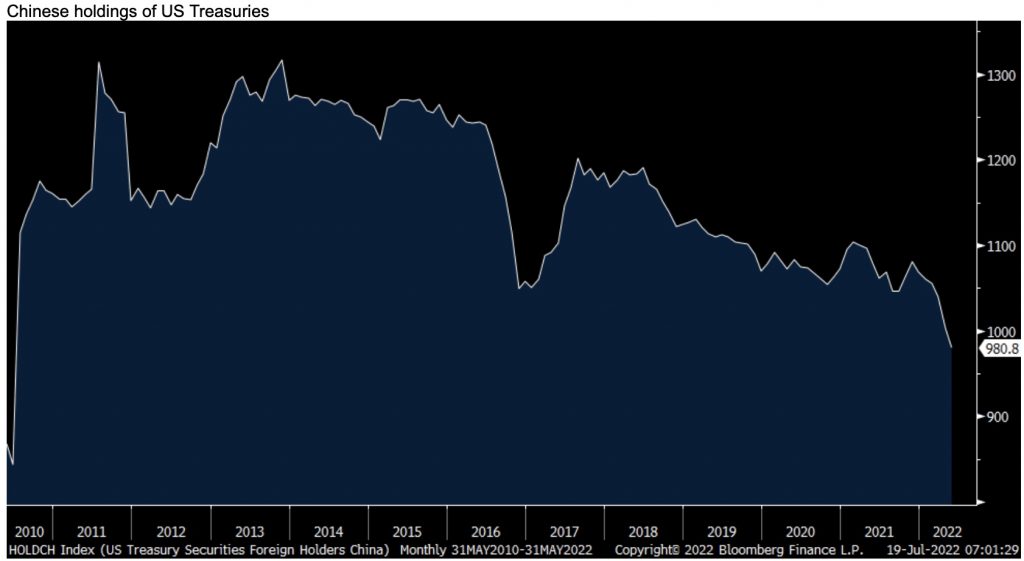 For Asia on the whole, they sold $25.4b of notes and bonds. Europe bought a net $40.4b with the UK making up most of this but any foreign participant could have gone thru a UK bank to account for this.

Bottom Line
Bottom line, with QT here, US banks already loaded up on Treasuries and more Treasury supply expected in the quarters to come, we watch to see to what extent foreigners can fill the gaps. At least for now, with the help of those in the Cayman’s (which is not sustainable), it’s taking place but be sure that as a percent of marketable securities, foreigners will own less in the years to come. Right now that percentage is about 1/3 vs 50% more than 10 years ago. And be sure that the Chinese will likely continue their diversification out of US Treasuries.

Real Estate
It’s very rare that I see the NAHB home builder sentiment index deviate much from expectations but Moday’s number for July was not the case. The July print was 55 vs 67 in June, was 10 pts below the estimate and the weakest since May 2020.

Home Builder Sentiment Tumbles To
Lowest Level Since May 2020 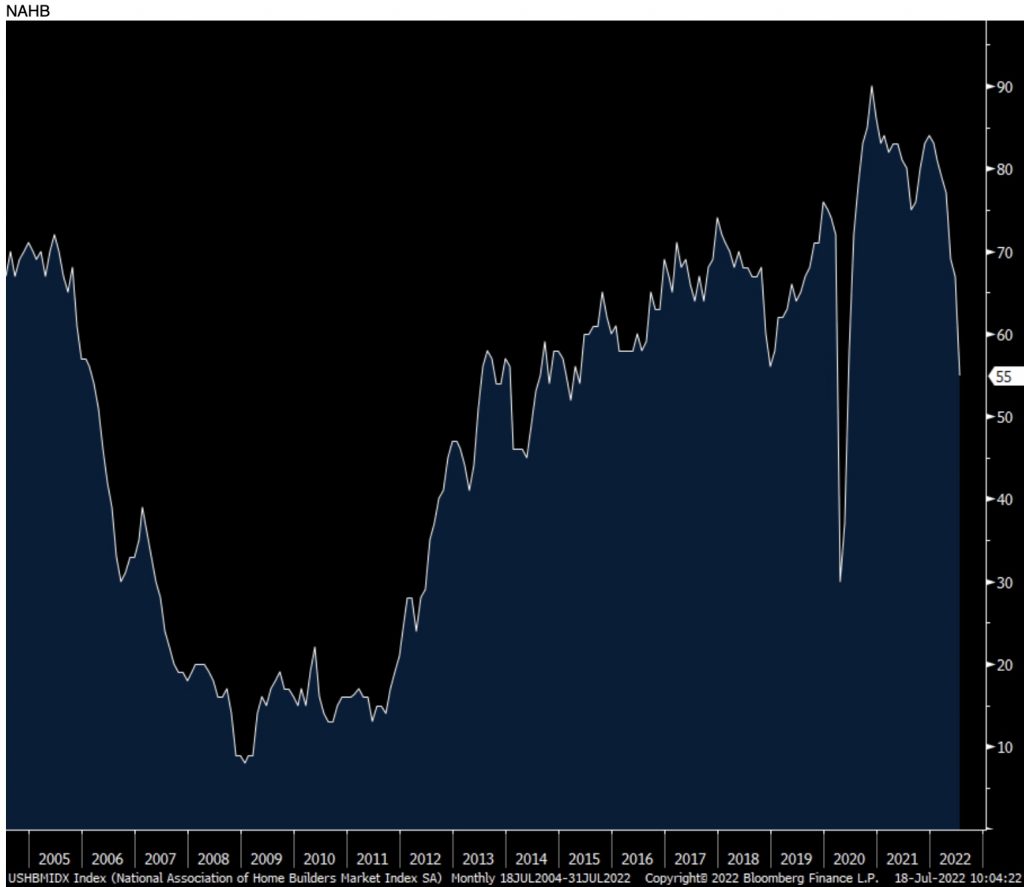 Prospective Buyers Traffic was down by 11 pts to just 37, also the lowest since May 2020 when no one was going anywhere.

Prospective Buyers Traffic Also Collapsed
To Lowest Level Since May 2020 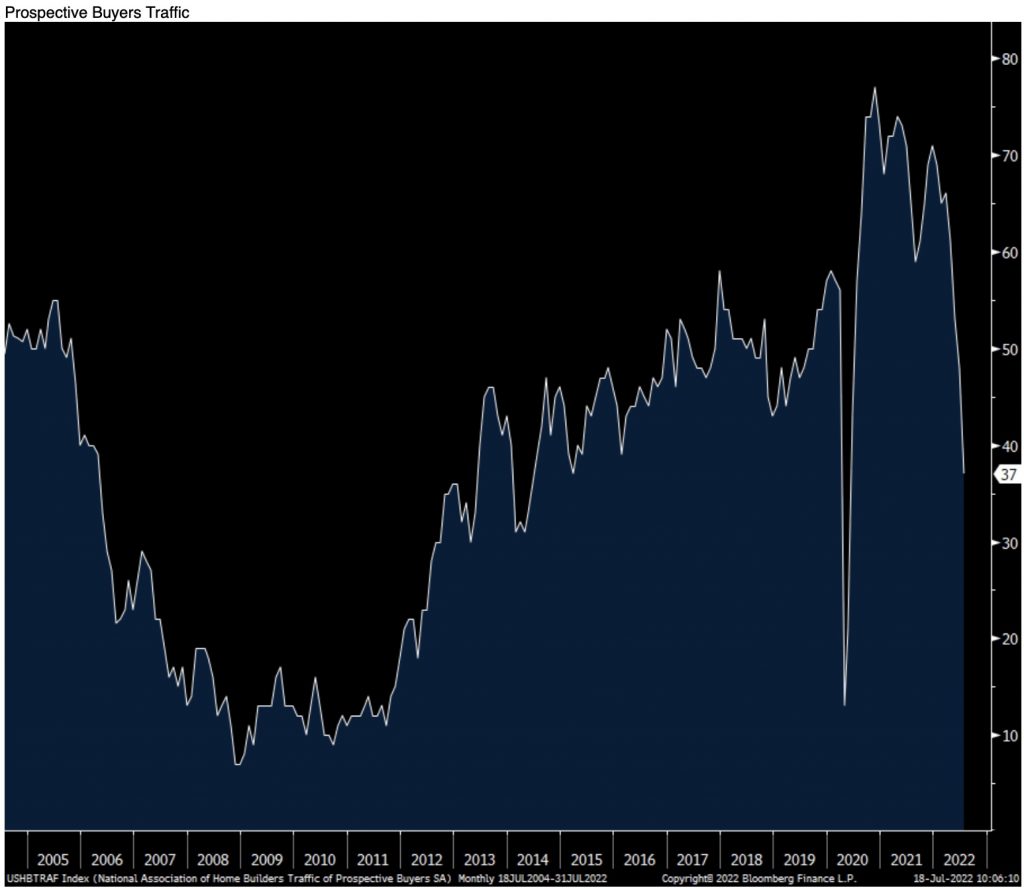 Housing starts totaled 1.56 million, 20k below the estimate. Most importantly, single family starts fell to 982k vs 1.07 million in May. That’s the least since June 2020. 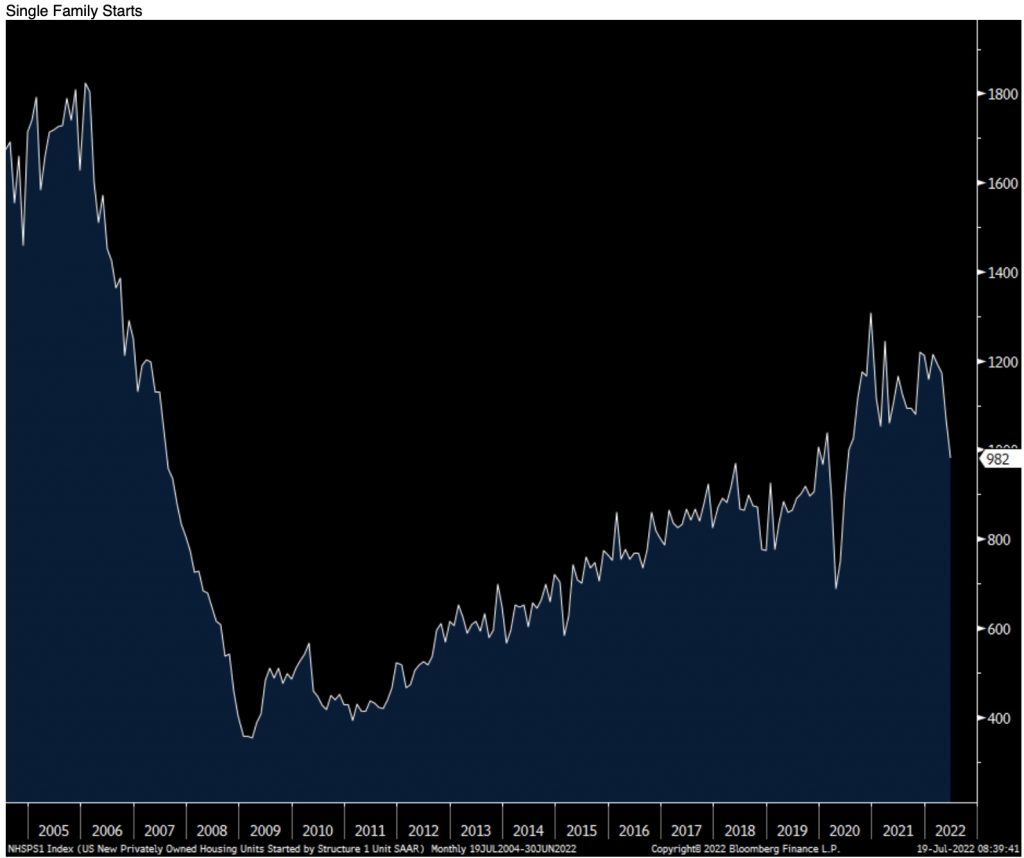 Multi family starts, that have held pretty steady this year, and the economies of scale to build are better than single family and low vacancy rates and high rents are calling for more supply, totaled 577k vs 523k in May, 632k in April and 525k in March.

As for permits, those for single family fell to 967k, the lowest since June 2020.

Bottom Line
Bottom line, we know all about the challenges on the demand side with respect to affordability and I’ll repeat what the Chairman of the NAHB said yesterday about the situation that builders still face:

“Production bottlenecks, rising home building costs and high inflation are causing many builders to halt construction because of land, construction and financing exceeds the market value of the home. In another sign of a softening market, 13% of builders in the survey reported reducing home prices in the past month to bolster sales and/or limit cancellations.” The bold is mine.