After another action-packed trading week in what has been a wild start to 2018, today Bill Fleckenstein told King World News that the tide is going out for financial assets and gold’s major breakout above $1,400 is going to happen.

February 17 (King World News) – Bill Fleckenstein:  “The bond market is going to be in trouble for quite some time and the dollar is going to be under pressure.  The real question is, when does psychology change across the board about the efficacy of all of these different policies?  With QT underway, the tide is going out for financial assets, and you’ve got a structure that’s quite brittle, which we got a small taste of in the last break (in the stock market) that wiped out some small subset of people that wanted to sell the VIX.  And there will be more of that when the market declines, but I don’t know in advance where the rally is going to fail and no one else does either.”

Eric King:  “Many people have been talking about the inverse head & shoulders pattern in gold and how there could be some fireworks on the upside.  If we get weakness in the stock market and we break to new lows, Bill, I know you expect the gold, silver and the mining stocks to do well.  Do you think gold could finally have that big breakout above $1,400 and change psychology?” 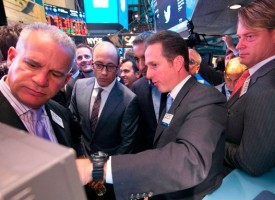 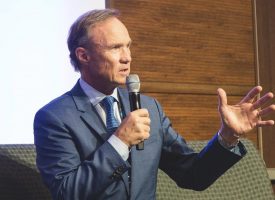