Despite the orchestrated short-term takedown, the price of gold is set for a historic spike! Plus Fed’s massive trading room at it again.

Fed’s Massive Trading Room At It Again
March 9 (King World News) – Stephanie Pomboy:  Stocks up 700pts and gold down -$70. Meanwhile, the hits keep coming. This ought to be really helpful right now! Seriously, if I were trying to concoct a formula for destroying the economy, I’d be hard pressed to do better than what we’ve seen over the last week.

Business As Usual At John Law Inspired Fed
Garic Moran:  As a reminder, John Law routinely marked Mississippi shares higher every morning and Gold lower in a desperate attempt to keep the Bubble from popping. The French public learned to sell the marked up shares to buy the discounted Gold as the currency continued to collapse…

“To The Moon, Alice!”
Peter Brandt:  The long-term (gold) chart is forming a massive Cup and Handle pattern. 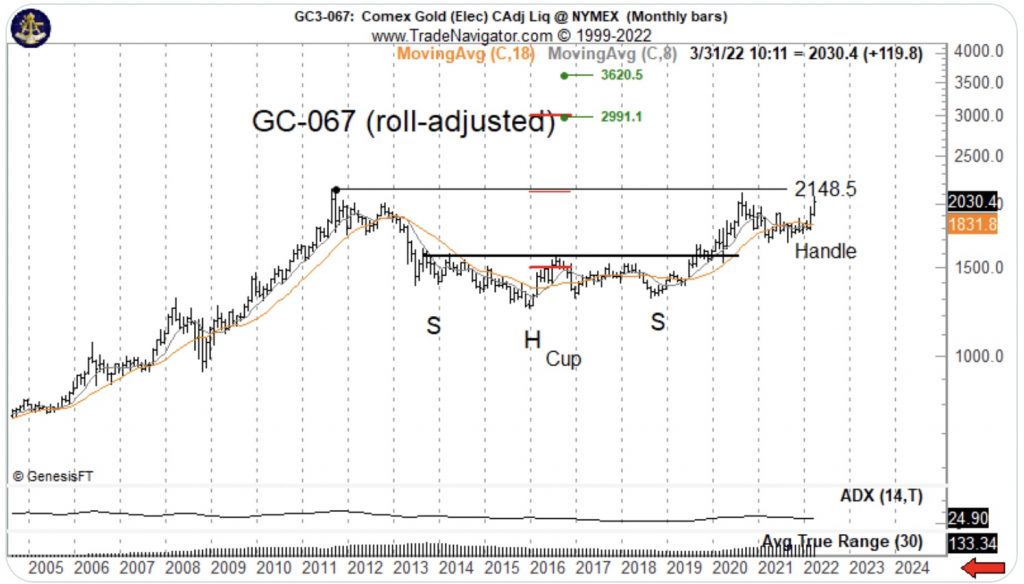 Time To Get Physical
Egon von Greyerz:  In a crisis of this magnitude, stay away from paper assets including ETFs of any kind. It is clearly imperative to have physical Silver and Gold stored outside the financial system.

Eric King:  “You recently announced the Dolly Varden deal, and if Dolly Varden is acquired, which looks to be the case in the future, then you would have a massive war chest of probably $100 million. That would make you one of the premier exploration companies in Canada unleashing the drills that would be self-funded many, many years to come.”

A Ton Of Torque To The Upside
Tim Clark:  “It’s an amazing opportunity right here because we are just in the sweet spot of this bull market, despite the volatility. And what you want to do when you get this kind of run in commodities is you want to find a company that has a ton of torque to the upside. And a company in the small cap space is usually not situated like this with multiple assets, a huge cash position, which includes marketable securities, and is massively undervalued. We are trading at 0.1 times Net Asset Value, and we have a staggering $65 million of marketable securities.

And what’s really important, Eric, is that we have remarkable assets in Canada, which is exactly where you want to be with this kind of geopolitical backdrop. And we also have a lot of torque with Committee Bay, which is essentially a 300 kilometer land package that we believe has the potential to yield a massive high-grade gold discovery. We are also aggressively moving forward in Quebec and we see a lot of upside going forward in the next drill program and we’re going to have the money to do it. So the future is incredibly exciting and that will ultimately be reflected in the share price. Fury Gold Mines, symbol FURY in Canada and the US.