With the Dow hitting new all-time highs and the U.S. dollar strengthening, this is how crazy the situation is across the globe.

Here is what Peter Boockvar wrote today as the world awaits the next round of monetary madness:  There has been a distinct disparity between the Investors Intelligence measure of stock market sentiment which survey’s newsletter writers and the AAII survey of individual investors. As stated yesterday, newsletter writers are euphoric. As seen over the last few weeks, the individual investor much less so. Today AAII said Bulls rose to 35.8, up 3 pts and the most in 3 weeks but it was 50 three weeks after the election. Bears fell 6.5 pts to 27.7, a 4 week low but it was as low as 22 after the election. I rely much more on the II data because the AAII figures look like an EKG chart after someone drank red bull. See chart on the measure of bulls over the last 10 years and you can see. 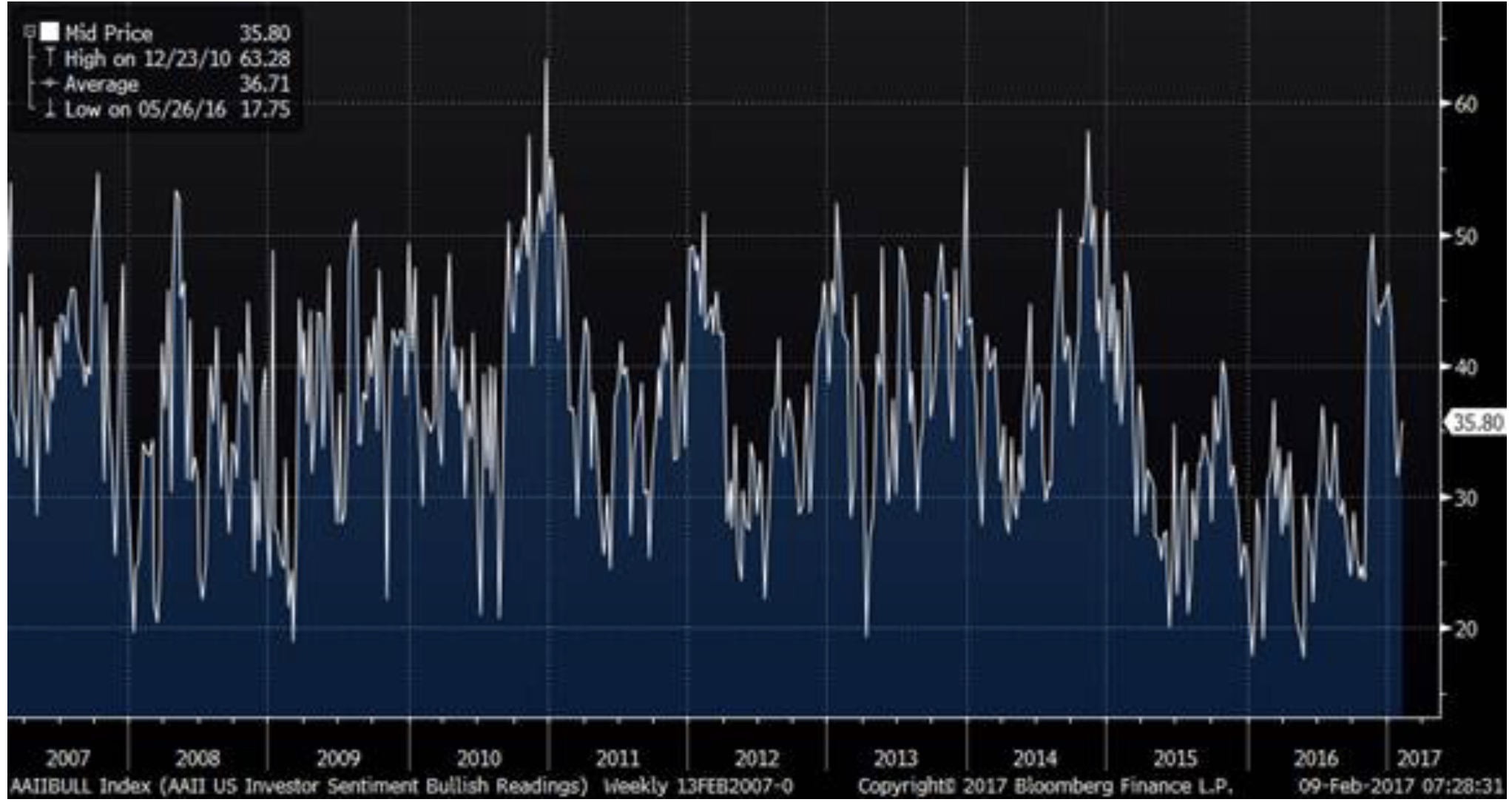 After we saw the largest amount of foreign bonds sold by the Japanese last week since April 2016, the Japanese kept on selling but at a much slower pace for the week ended February 3rd. The spread capture between Japanese yields and overseas has been almost completely diluted by FX hedging and now we have higher long term yields in Japan that are all of a sudden attractive to domestic buyers. The Japanese 40 yr yield in July was 7 bps. It touched 1.07% yesterday. For the poor sucker who bought that JGB in July, how many years of interest income will it take to offset the decline in capital? I have to do the math but we’re talking at least a few hundred years…

Japanese machinery orders in December rose 6.7% m/o/m, double the estimate of up 3% but follows a 5.1% drop in November. The y/o/y gain though was still a good 6.7% and the economic data out of Japan still remains mixed.

I cannot freaking believe that I still have to read about financial strains in Greece and battles with the IMF and Germany. I promised myself not to mention their financial woes ever again a few years ago and only focus on their beautiful islands. The 2 yr Greek yield is spiking by 64 bps to 10%. It was below 7% two weeks ago but was 16% one year ago. Their curve is firmly inverted as the 10 yr yield is up by 8 bps to 7.82%. The Athens stock market is down by 1% at the lowest level since late November. Sovereign bonds in Italy, Spain and Portugal are bouncing though and thus seeing no negative overflow. 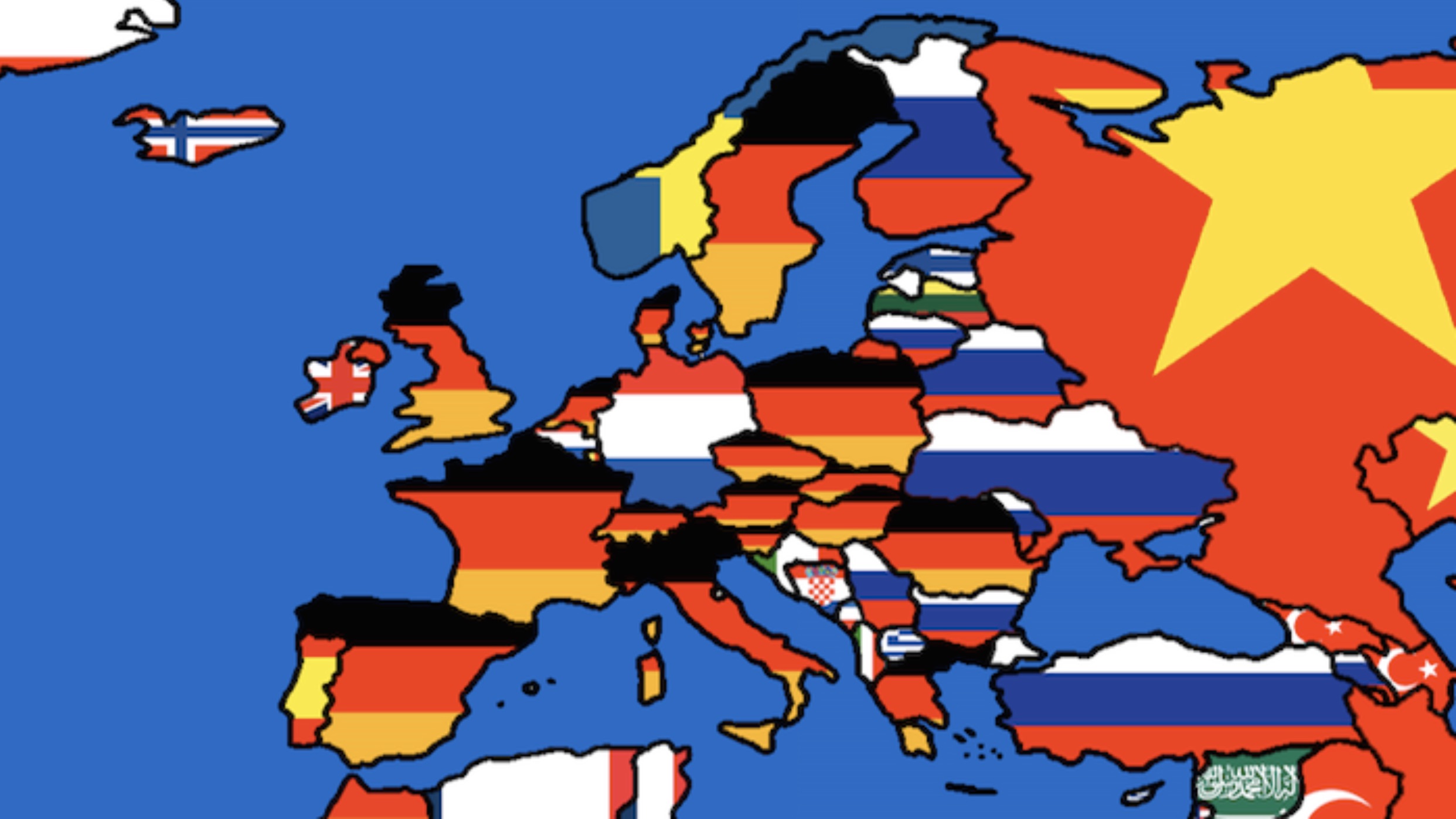 The European map (above) shows that Germany is the trade champion to the vast majority of European countries — 16 out of 28 EU members have Germany as their biggest trade partner!

The export powerhouse that is Germany saw exports fall by 3.3% m/o/m in December which was worse than the estimate of down 1.3%. It follows a 3.9% rise in November. For the full year though, Germany saw a record trade surplus of 253b euros which is about 8% of GDP. Peter Navarro is not happy about that and I’ll be watching for a Trump tweet (trade surplus with the US is 45b euros thru November). Imports were unchanged m/o/m. It didn’t take long for European Commission spokeswoman said “The commission has long pointed toward Germany’s current account surplus, its large and persistent current account surplus, as a source of macro economic imbalances.” I have to laugh when I hear criticism of Germany’s surplus. Where would the EU be without the strength of the German economy over the recent years. The place would be a mess.

After 3 days of squishy trading in European bank stocks, the index is up today after better than expected earnings from Soc Gen. What is amazing about the banking system in Europe is that the deeper the ECB went with negative deposit rates, the more money banks parked at the ECB and thus got taxed. It’s dysfunctional. See chart of the level of excess reserves parked at the ECB. It was June 2014 when the ECB first went to negative rates.

***KWN has released the powerful audio interview with top trends forecaster in the world Gerald Celente and you can listen to it by CLICK HERE OR ON THE IMAGE BELOW.

***ALSO JUST RELEASED: Celente: A World On The Edge Of Chaos As China, Gold, France & The Middle East May Erupt CLICK HERE.