“The Sombrero project continues to evolve as a globally significant exploration opportunity due to it’s scale and analogous features to the world-class mines nearby.

“It is a rare opportunity to explore a project with this size and scale that has never been drilled before. We still don’t know the full extent of the mineralized system, on surface or at depth however, we anticipate drill permits in the second quarter of 2019.”

The Targets:
The targets are based on extensive geological mapping, geochemical sampling and geophysical surveys. The results of the targeting have outlined a large copper – gold system that is exposed over a 10 x 5 kilometer area (Figure 1). This scale of alteration and mineralization is similar in scale to the Las Bambas complex and demonstrates the potential magnitude of the opportunity at the Sombrero project (Figure 1). Auryn has recognized three superimposed separate target types within the observed Sombrero mineralized system:

• Exoskarn high-grade gold: copper – gold targets located along the boundary between monzonitic to dioritic intrusives and the Ferrobamba limestone.

The area currently being drill permitted (Figure 1) allows for 40 drill pads, giving Auryn’s technical team flexibility in the initial program to make adjustments based on the geology identified while drilling. There are a total of 7 high-priority exoskarn targetsover a 4.5 kilometer strike length at the contact between the multiphase intrusive complex and the Ferrobamba limestone (Figure 2). In addition, there are a total of 6 high-priority chargeability (IP) targets over a 7.25 kilometer strike length that represent the potential for bulk tonnage endoskarn and porphyry-styles of disseminated copper – gold mineralization. Typically, these chargeability anomalies are situated between 100 – 150 meters below the surface, with several of them situated underneath mineralized trenches. The 2019 drill program will test for exoskarn targets, endoskarn targets and porphyry-style targets (Figure 3) with drill holes ranging from 200 – 800 meters in depth. 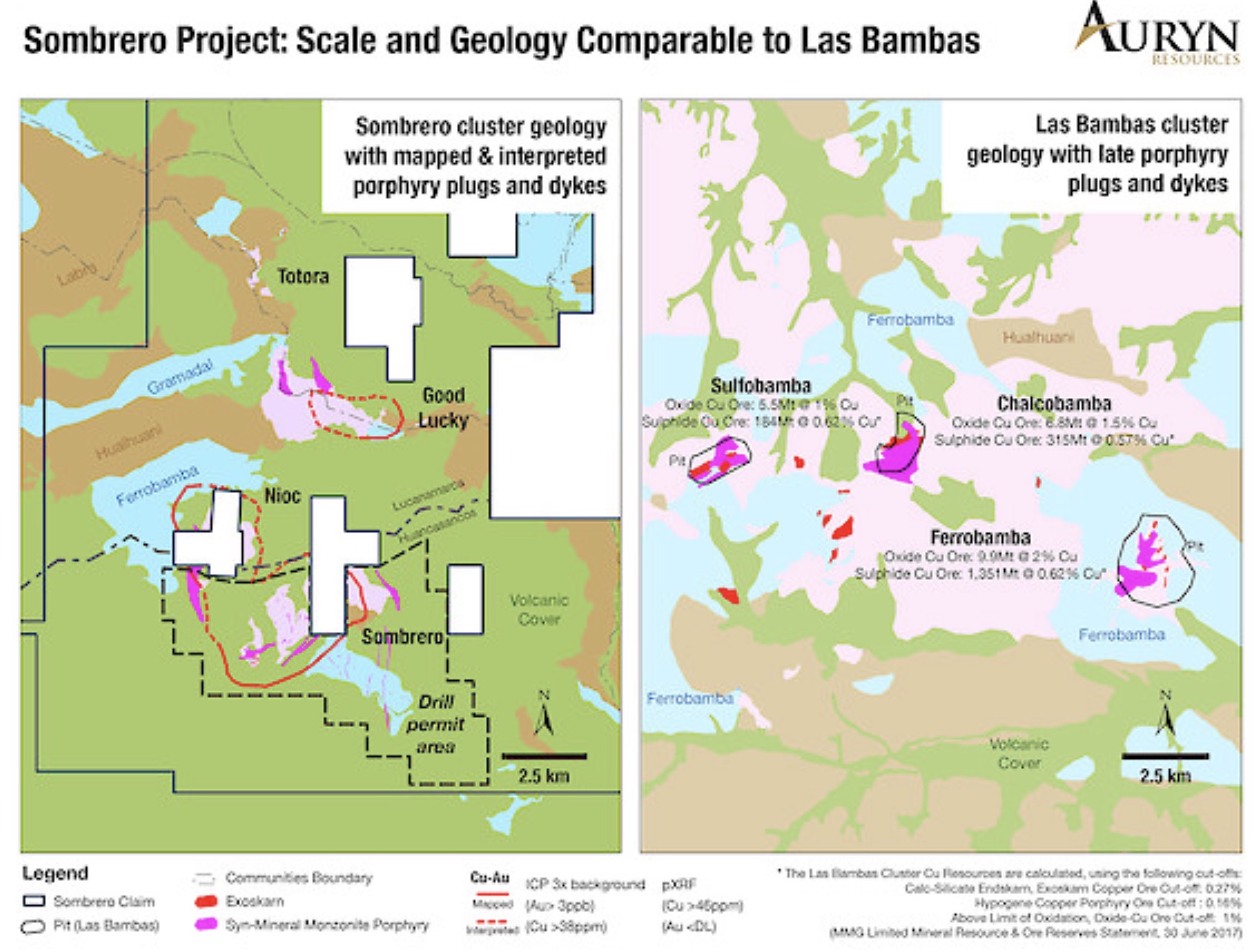 Technical Rationale:
Geologic and Geochemical Summary:
The defined targets are centered around three exposed copper – gold systems at the Sombrero Main, Nioc and Good Lucky areas, which are situated within a larger Pb-Zn mineralization alteration halo (15 x 10 kilometers) (Figure 4) that defines the known extent of the mineralization and alteration within the project area. There are three recognized stages of mineralization present within the area, which are defined below:

• Stage 1: Prograde exoskarn and endoskarn development associated with the emplacement of large diorite bodies into the Ferrobamba and Gramadal limestone sequences. As part of this event fracture network copper – gold mineralization is observed within the underlying sediments within the Hualhuani and Labra Formations (Figure 3).

• Stage 3: Porphyry staged copper – gold veins and breccia associated with intense clay alteration and the emplacement of evolved monzonitic intrusive dykes and plugs. These evolved porphyry staged dykes and plugs are associated with a molybdenum geochemical signature (Figure 4). These porphyry targets are developed both within the larger diorite intrusive bodies as well as within the sediments of the Hualhuani and Labra Formations (Figure 3). 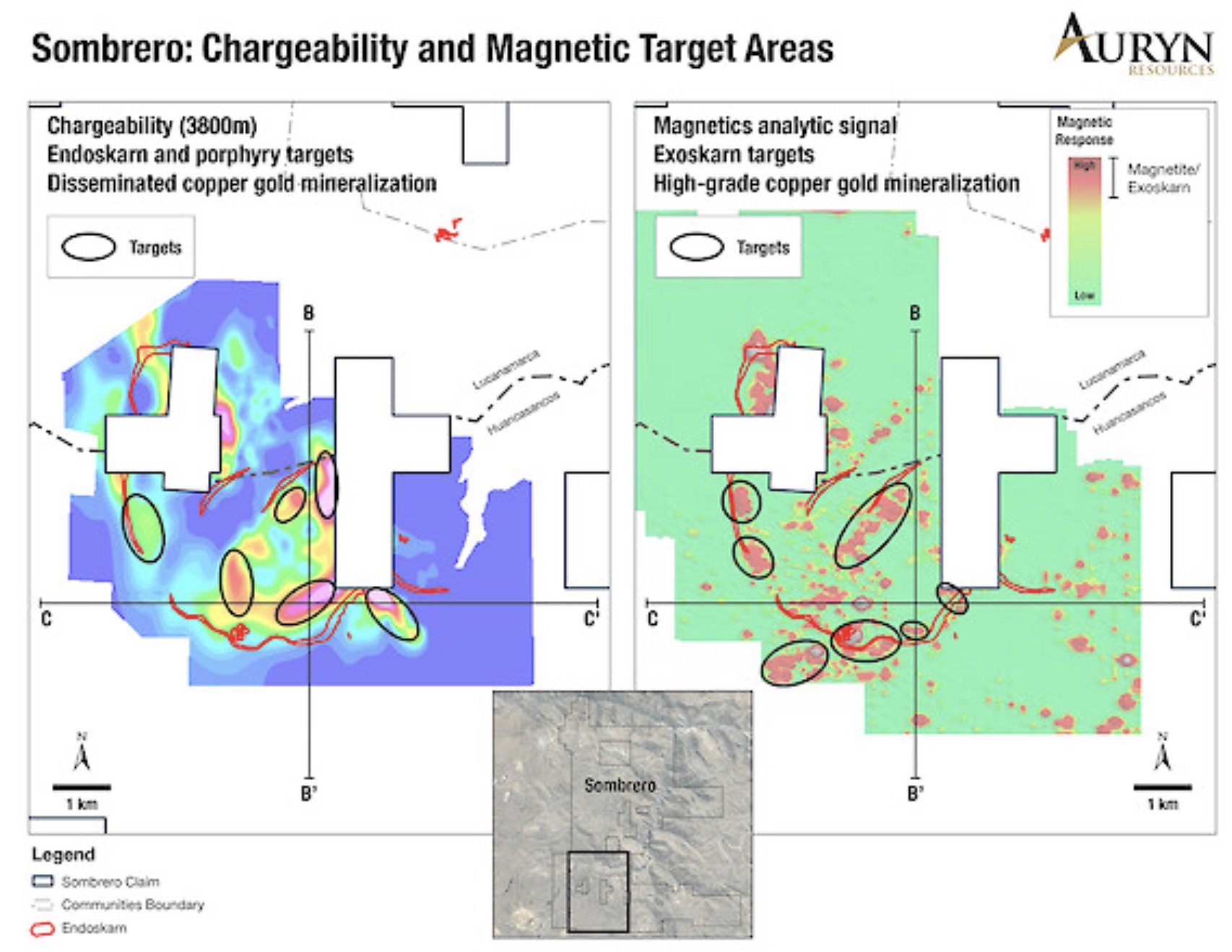 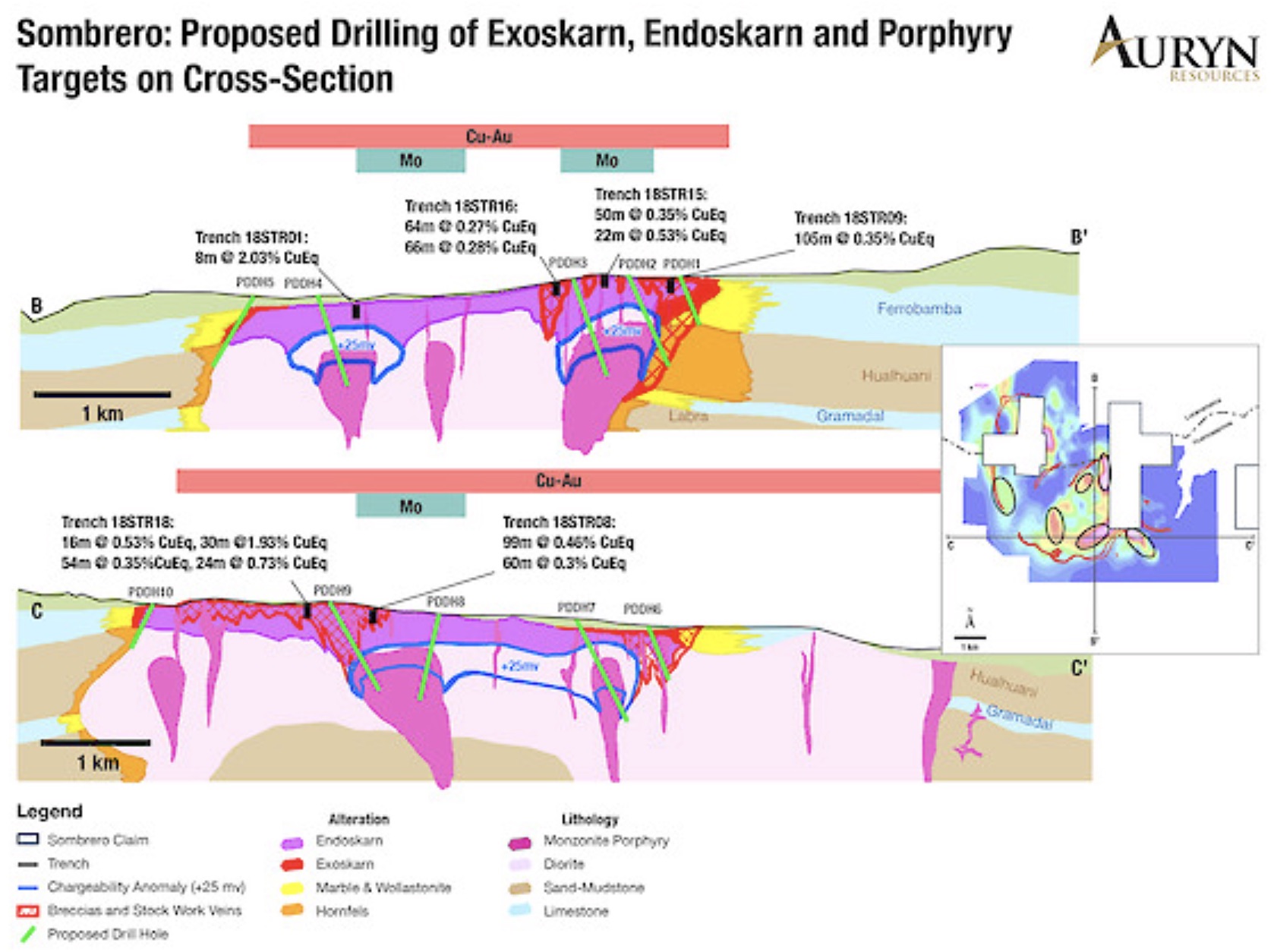 Figure 3 illustrates drill traces depicted by the green lines on geological and geophysical cross-sections. These sections demonstrate the drill targeting concepts that aim to build a discovery through drilling high-grade exoskarn and bulk tonnage endoskarn and porphyry-styles of mineralization.

• Drill holes PDDH1, PDDH5, PDDH6 and PDDH10 target high-grade exoskarn mineralization at the contact between the monzonitic intrusive and the Ferrobamba limestone.

• Drill hole PDDH2 targets bulk tonnage endoskarn mineralization in the monzonitic intrusive and then into pophryry-style mineralization within the Hualhuani sediments through a changeability anomaly of greater than 25 millivolts.

Geophysics Summary:
The use of geophysics data has proven integral to the development of targets at the Sombrero project. Through the integration of geologic mapping and magnetic and induced polarization data, Auryn has been able to identify all of the target types listed above.

Magnetic highs have a direct spatial correlation with mapped exoskarn bodies which allows us to target, under the volcanic cover, the exoskarn that flanks the large multiphase intrusive body at the Sombrero and Nioc targets (Figure 2). A total of 4.5 kilometers of strike length of exoskarn targets have been defined along the flanks of the multiphase intrusive center, defining the Sombrero target and again demonstrating the potential size of the mineralized system at the project.

A comprehensive IP geophysical survey was completed in an effort to image disseminated sulphide bodies defined by chargeability highs above 25 millivolts. These chargeability highs are interpreted to have the potential to host significant copper – gold mineralization (Figure 2).

Figure 3 illustrates two cross-sections through the Sombrero target area that demonstrate the distribution of exoskarn and endoskarn target types being observed on the surface and at depth through the use of magnetics and IP geophysical surveys. These cross-sectionsintegrate geological mapping, surficial geochemical data from soils, rocks and trenches as well as the geophysical data. Critically, all data sets support the potential for a large-scale copper – gold mineralized system, both in skarn and porphyry-styles of mineralization, hosted within the Ferrobamba limestone, the multi-phase intrusive complex and the Hualhuani sediments.

District-Scale Opportunity:
The drill targeting exercise has been completed over the Sombrero and Nioc target areas, an area of approximately 5 x 5 kilometers. To date, work in the Sombrero district has focused on the Sombrero North licences, which includes 62,000 hectares. Auryn controls an additional 58,000 hectares in the Sombrero South project area, which is situated approximately 50-75 kilometers to the southeast of the Sombrero North project area (Figure 5). Initial follow-up work on these anomalous drainage basins has included higher resolution stream sediment surveys, reconnaissance mapping and rock sampling. The goal of this work is to identify the next mineralized system to advance towards drill targeting. Results from this work are anticipated to be released over the next several months as Auryn continues to develop new targets within the district.

“The drill targeting process has demonstrated that the Sombrero project has the scale, continuity of mineralization on surface and required geophysical signatures to deliver a major copper – gold discovery.

“We are very impressed with the geologic similarities between Sombrero and Las Bambas and are looking forward to drilling the three target types of high-grade exoskarns, bulk tonnage endoskarns and porphyry-styles of mineralization.” 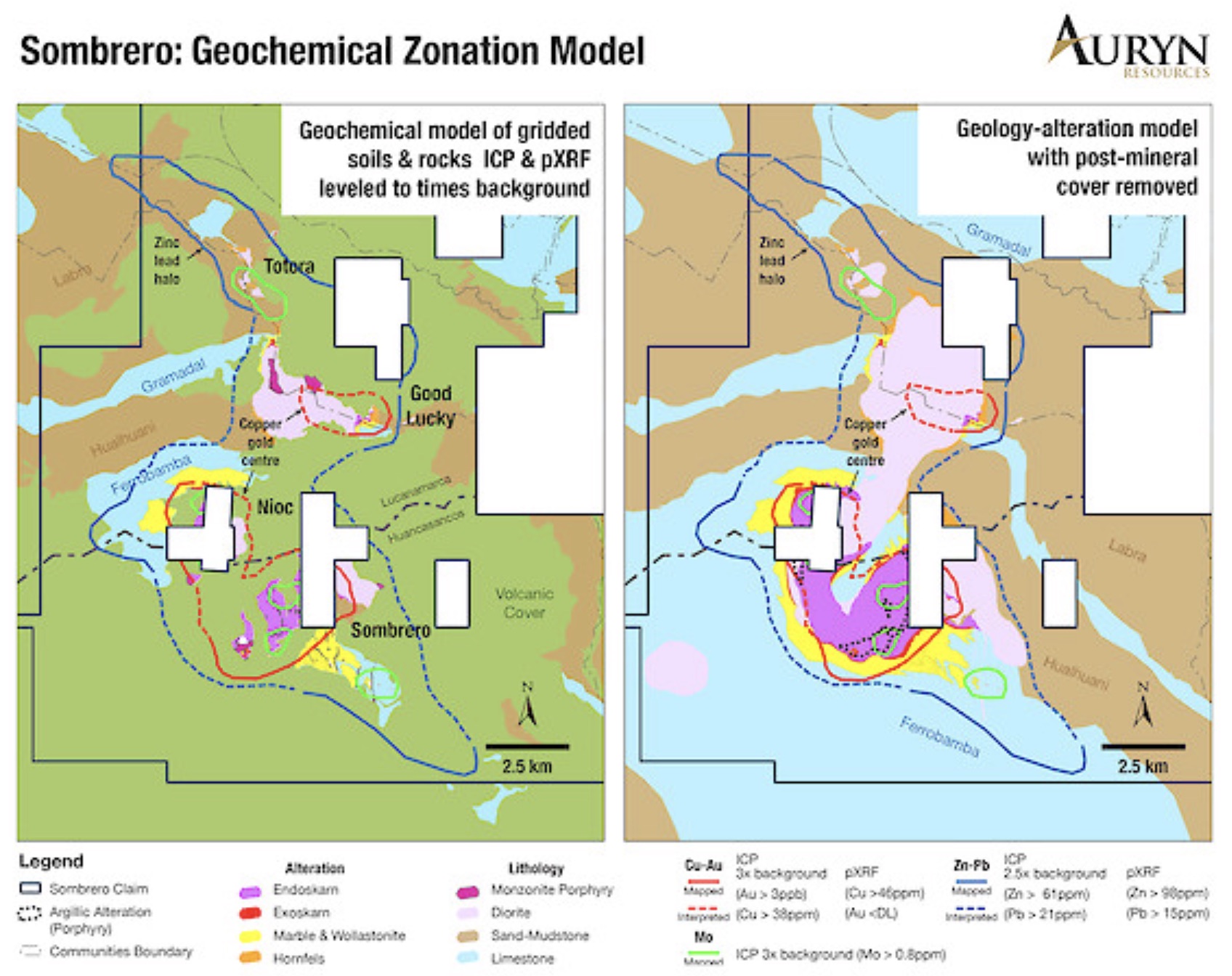 Figure 4 illustrates the geochemical zonation patterns within the Sombrero mineralized system. The system is defined by a lead – zinc halo that occurs over an area of approximately 15 x 10 kilometers. Internal to this halo there are three copper – gold systems that are exposed at the Sombrero, Nioc and Good Lucky occurrences. Molybdenum geochemical signatures are typically located internal to the copper – gold systems and are spatially associated with evolved monzonitic intrusive rocks that are associated with porphyry-styles of mineralization. The image on the left shows the mineralized system on a geologic map with the volcanic cover that is present; whereas, the image on the right shows the same mineralized system on an interpreted geologic map with the volcanic cover removed. 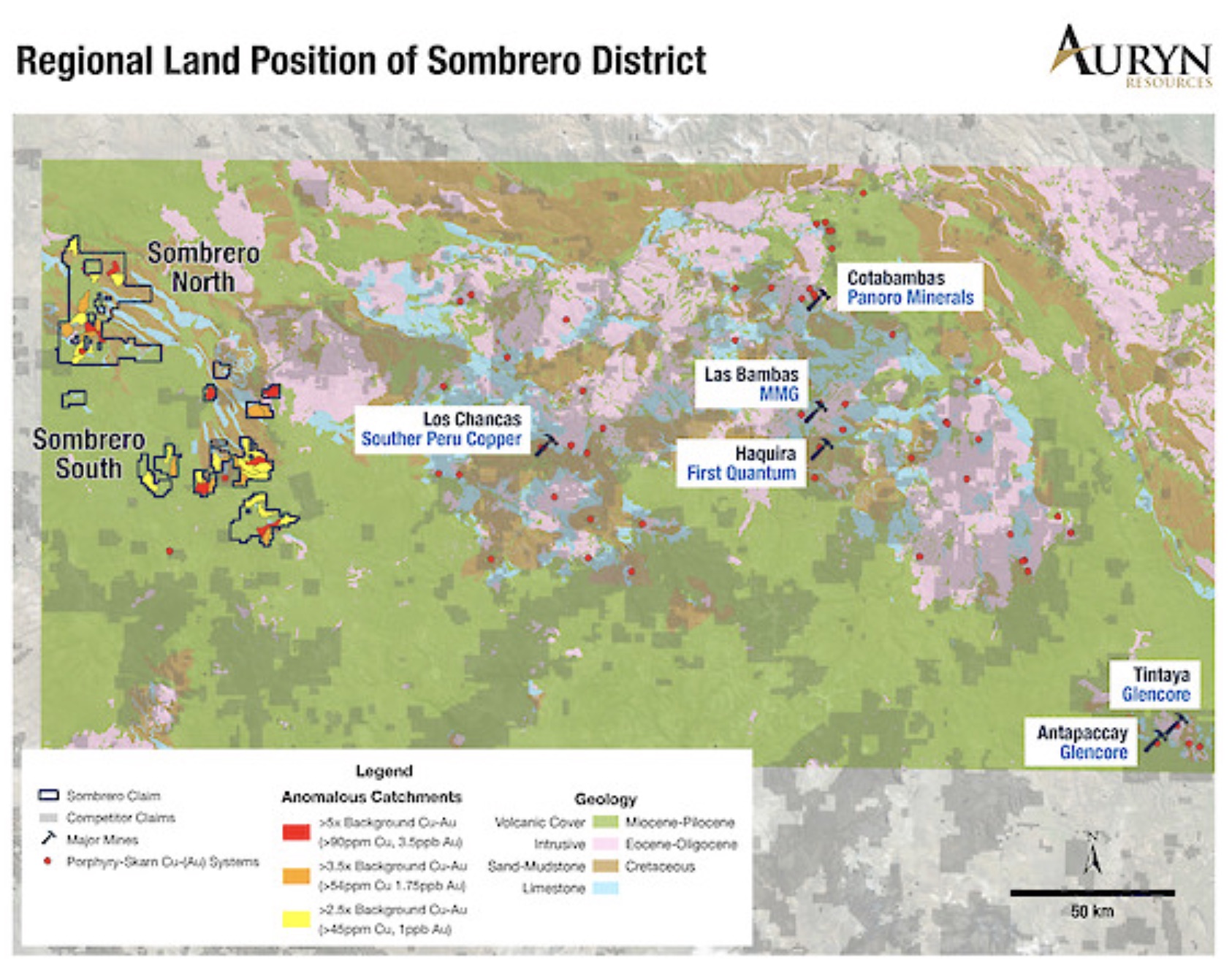 Figure 5 illustrates the greater land position of 120,000 hectares within the Sombrero district in comparison to the defined Los Bambas, Tintaya Los Chancas districts. Importantly, follow-up work on the Sombrero South cluster of licenses is expected to be released in the coming months as Auryn looks to define a second mineralized system that can be advanced to the drill stage.

Michael Henrichsen, P.Geo, COO of Auryn, is the Qualified Person who assumes responsibility for the technical disclosures in this press release.

ON BEHALF OF THE BOARD OF DIRECTORS OF AURYN RESOURCES INC.

About Auryn
Auryn Resources is a technically driven junior mining exploration company focused on delivering shareholder value through project acquisition and development. The Company’s management team is highly experienced with an impressive track record of success and has assembled an extensive technical team as well as a premier gold exploration portfolio. Auryn is focused on scalable high-grade gold deposits in established mining jurisdictions, which include the Committee Bay and Gibson MacQuoid gold projects located in Nunavut, the Homestake Ridge gold project in British Columbia and a portfolio of gold projects in southern Peru, through Corisur Peru SAC and Sombrero SAC.

About Sombrero
This project consists of the North Sombrero and South Sombrero properties, comprising approximately 100,000 mineral claims owned or optioned by Auryn Resources. The copper-gold Sombrero mining concessions are located 340 kilometers SE of Lima in southern Peru and are hosted in the Andahuaylas-Yauri belt. This belt is interpreted to be on the north-western margins of this Eocene-Oligocene aged copper-gold porphyry and skarn belt that hosts the Las Bambas, Haquira, Los Chancas, Cotambambas, Constancia, Antapaccay and Tintaya deposits. The project is characterized by a strong structural control and significant copper and gold values from historical surface samples. The principle targets at Sombrero are copper-gold skarn and porphyry systems and precious metal epithermal deposits.

Forward Looking Information and Additional Cautionary Language
This release includes certain statements that may be deemed “forward-looking statements”. Forward-looking information is information that includes implied future performance and/or forecast information including information relating to or associated with the acquisition and title to mineral concessions. These statements involve known and unknown risks, uncertainties and other factors which may cause actual results, performance or achievements of the Company to be materially different (either positively or negatively) from any future results, performance or achievements expressed or implied by such forward-looking statements. Readers should refer to the risks discussed in the Company’s Annual Information Form and MD&A for the year ended December 31, 2017 and subsequent continuous disclosure filings with the Canadian Securities Administrators available at www.sedar.com and the Company’s registration statement on Form 40-F filed with the United States Securities and Exchange Commission and available at www.sec.gov. 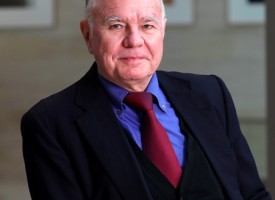 Marc Faber Reveals The Greatest Investment For The Next 100 Years

The Key Thing People In Happy Relationships Do Differently