November 15, 2018 – Vancouver, B.C. – Gold Standard Ventures Corp. (TSX: GSV; NYSE AMERICAN: GSV) (“Gold Standard” or the “Company”) today reported more impressive results from two reverse-circulation (“RC”) holes and four core holes at the Dark Star deposit on its 100%-owned/controlled Railroad-Pinion Project in Nevada’s Carlin Trend. With this news release, results have now been reported for 128 of the 136 holes that have been completed at Dark Star.

Two holes in the northern portion of Dark Star intersected vertically-continuous zones of oxidized gold mineralization including 33.5m of 2.33 g Au/t in DR18-109 and 109.8m of 1.00 g Au/t in DR18-110 (refer to Dark Star drill hole plan and section maps at the following link https://goldstandardv.com/lp/ds-nov15-2018-drillmaps/).  These results continue to confirm oxide gold resource potential below the depth of the current resource model as well as potential to expand the resource laterally in multiple directions.

The current expanded development drilling program announced on September 20, 2018 (see news release) consists of approximately 5,400m of additional RC drilling in 17 holes to test new targets at depth below the current resource model, and 18 additional holes to test the potential for further lateral resource expansion to the north, west and south of the current resource.  Seven of these drill holes have been completed.

Jonathan Awde, CEO and Director of Gold Standard commented: “Dark Star continues to grow both laterally and at depth. As the deposit continues to expand, we are seeing important opportunities to improve and optimize our potential development path.  Perhaps most important, we are now routinely seeing significant widths of oxide material grading above two grams per tonne. We expect these types of grades will give us more opportunities as we continue along our potential development path.”

• DC18-23, a step out core hole in the southern portion of Dark Star, intersected 45.1m of 1.16 g Au/t, including 10.7m of 2.61 g Au/t.  Oxide mineralization begins at the current topographic surface, it remains open in multiple directions and the intercept extends the gold grade in the current resource model.  DC18-23 is approximately 240m south of DC18-17 which intersected 76.6m of 0.47 g Au/t, and 60m east of DC18-18 which intersected 15.2m of 0.38 g Au/t (see September 24, 2018 news release).  Collectively, this new opportunity to expand the resource is coincident with an undrilled surface outcrop rock chip anomaly south of the known deposit.  Additional drilling is planned for this area over the next few weeks.

• DC18-04, DC18-06 and DC18-08 were geotechnical core holes drilled away from the resource into the proposed west and east highwalls, to confirm geotechnical parameters in the proposed open pit highwall.  Gold mineralization was not expected in these drill holes. 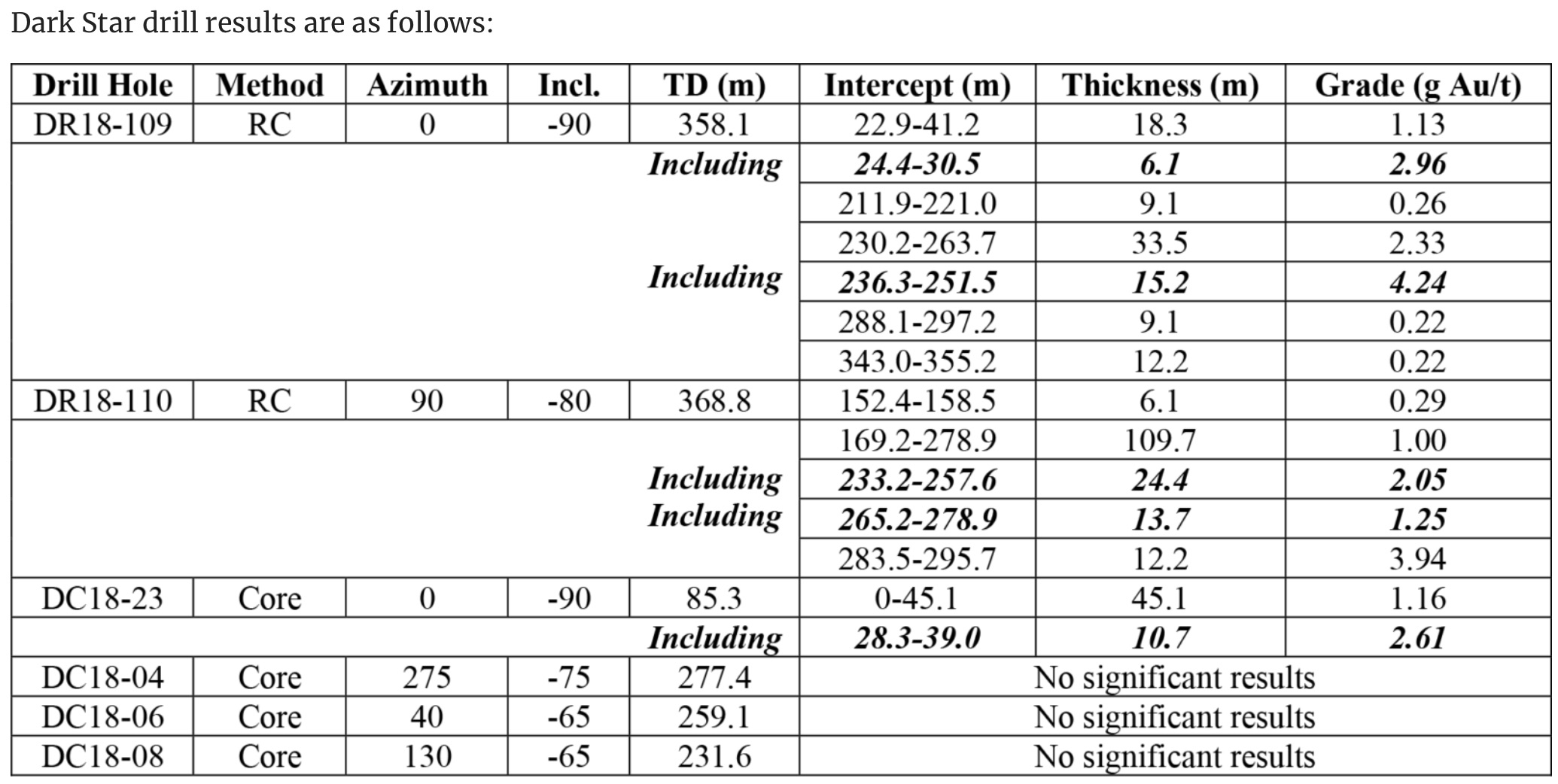 Don Harris, Gold Standard’s Senior Development Geologist commented: “Dark Star continues to present opportunity for growth in the oxide resources, as shown in the results for holes 23, 109, and 110.  North Dark Star results (109 and 110) are particularly interesting with long runs of oxide mineralization and higher- grade sulfide at depth.  These results continue to move the footprint of the deposit north and west.”

All sampling was conducted under the supervision of the Company’s project geologists and the chain of custody from the project to the sample preparation facility was continuously monitored.  A blank, certified reference material, or rig duplicate was inserted approximately every tenth sample.  The samples were delivered to Bureau Veritas Mineral Laboratories preparation facility in Elko, NV where they were crushed and pulverized.  Resulting sample pulps were shipped to Bureau Veritas certified laboratory in Sparks, NV or Vancouver, BC.  Pulps were digested and analyzed for gold using fire assay fusion and an atomic absorption spectroscopy (AAS) finish on a 30-gram split.  Over limit gold assays were determined using a fire assay fusion with a gravimetric finish on a 30-gram split. All other elements were determined by ICP analysis.  Data verification of the analytical results included a statistical analysis of the standards and blanks that must pass certain parameters for acceptance to insure accurate and verifiable results.

Drill hole deviation was measured by gyroscopic down hole surveys that were completed on all holes by International Directional Services of Elko, NV.  Final drill collar locations are surveyed by differential GPS by Apex Surveying, LLC of Spring Creek, Nevada.

The scientific and technical content contained in this news release have been reviewed, verified and approved by Steven R. Koehler, Gold Standard’s Manager of Projects, BSc. Geology and CPG-10216, a Qualified Person as defined by NI 43-101, Standards of Disclosure for Mineral Projects.

Neither the TSX nor its regulation services provider nor the NYSE AMERICAN Exchange accepts responsibility for the adequacy or accuracy of this news release.

This news release contains forward-looking statements, which relate to future events or future performance and reflect management’s current expectations and assumptions. Such forward-looking statements reflect management’s current beliefs and are based on assumptions made by and information currently available to the Company. All statements, other than statements of historical fact, included herein including, without limitation, statements about our potential near term development option are forward looking statements. By their nature, forward-looking statements involve known and unknown risks, uncertainties and other factors which may cause our actual results, performance or achievements, or other future events, to be materially different from any future results, performance or achievements expressed or implied by such forward-looking statements.  Risk factors affecting the Company include, among others: the results from our exploration programs, global financial conditions and volatility of capital markets, uncertainty regarding the availability of additional capital, fluctuations in commodity prices; title matters; and the additional risks identified in our filings with Canadian securities regulators on SEDAR in Canada (available at www.sedar.com) and with the SEC on EDGAR (available at www.sec.gov/edgar.shtml). These forward-looking statements are made as of the date hereof and, except as required under applicable securities legislation, the Company does not assume any obligation to update or revise them to reflect new events or circumstances.

CAUTIONARY NOTE FOR U.S. INVESTORS REGARDING RESERVE AND RESOURCE ESTIMATES

All resource estimates reported by the Company were calculated in accordance with the Canadian National Instrument 43-101 and the Canadian Institute of Mining and Metallurgy Classification system. These standards differ significantly from the requirements of the U.S. Securities and Exchange Commission for descriptions of mineral properties in SEC Industry Guide 7 under Regulation S-K of the U. S. Securities Act of 1933. In particular, under U. S. standards, mineral resources may not be classified as a “reserve” unless the determination has been made that mineralization could be economically and legally produced or extracted at the time the reserve determination is made. Accordingly, information in this press release containing descriptions of the Company’s mineral properties may not be comparable to similar information made public by US public reporting companies.

On behalf of the Board of Directors of Gold Standard,

Bouhanni doubles up at Dauphine