With continued consolidation in the gold and silver markets, below is an extremely important update on the gold market that was just issued by SentimenTrader.

From Jason Goepfert at SentimenTrader:  “The Optimism Index on gold has moved above 75 for the first time since 2011, a troubling level. That’s especially true since “smart money” commercial hedgers have moved to a near-record net short position against the metal. It suffered a key reversal day as sellers rejected a new 52-week high on June 16, but those one-day patterns have been inconsistent predictors of further weakness. Even so, we consider the market to be high-risk. 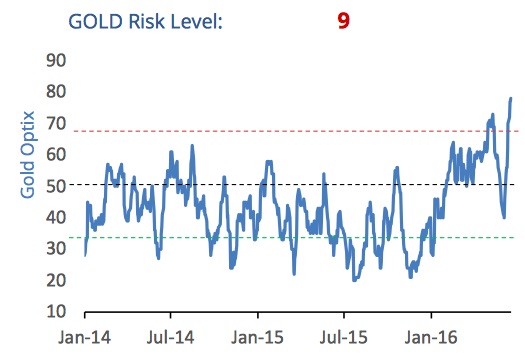 King World News note:  Just 19 days ago SentimenTrader had their risk rating on gold pegged at just “5.”  As you can see on the chart above, in less than three weeks SentimenTrader’s risk rating on the gold market has skyrocketed all the way to a dangerous “9.”  It will be interesting to see how gold trades in the coming days and weeks, especially with near-record commercial net short positions.