In the aftermath of today’s plunge in the gold market, which was setoff by a one minute, $1 billion paper gold dump, one of the greats in the business just flashed this major alert on gold.

As shown in Figure 1, this does not mean commercial activity boasts infallible predictive value. Throughout gold’s two-year advance to September 2011 highs, for example, commercials maintained record short exposures. Such is the nature of the predominantly hedging role played by commercial players in gold markets. However, at least since the waning months of gold’s 20-year bear market which ended in 2001, on each occasion commercials have abandoned their hedging posture almost entirely, strength in the gold price has proved imminent. 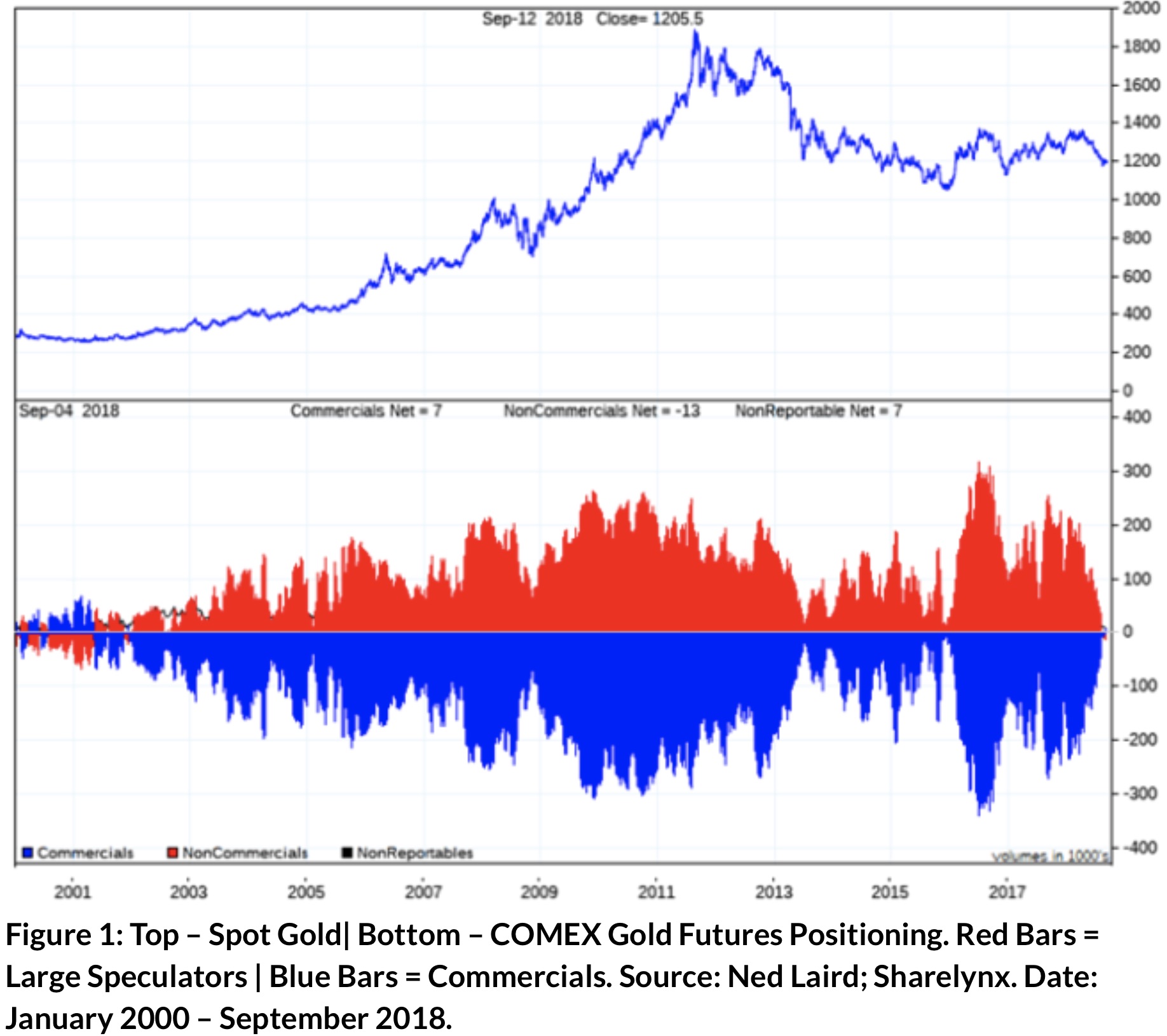 In the zero-sum framework of COMEX contracts, gold commercials have achieved their rare net-long position by absorbing an onslaught of fresh shorts from the speculator community, in the process, choosing collectively to retire their own short posture. As we outlined in our August report (Summer Test), specs have built an (equally rare) net-short position by way of a literal explosion in their gross shorts, which quadrupled from 55,678 contracts on March 27, 2018 (and a post-2001 average of 57,000 contracts) to an Aug. 21, 2018 peak of 222,210 contracts.

Figure 2 demonstrates that the Aug. 21, 2018 peak in spec shorts was not only a new all-time high, but it also exceeded the prior 2015 record by 40%. While we recognize anything is possible, it seems improbable that hedge-fund specs are about to pickoff the entire commercial community with such an unprecedented bearish bet. 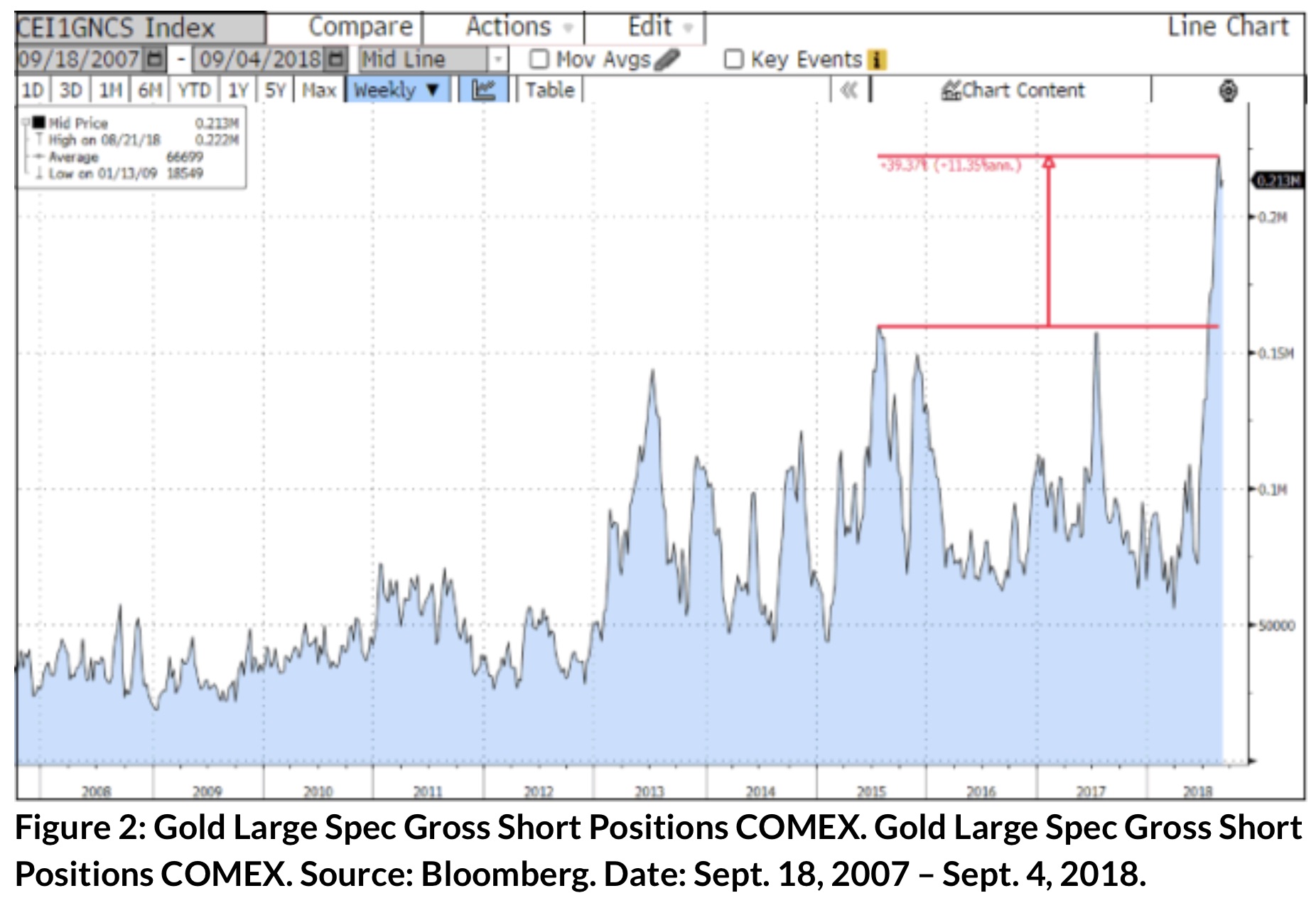 STRONG U.S. DOLLAR CONTINUES TO DAMPEN PRECIOUS METALS
The mid-2018 decline in precious metals sentiment has clearly run hand-in-hand with rekindled enthusiasm for the U.S. dollar. As we mentioned in August, the DSI1 sentiment reading for the U.S. dollar touched 96% bullish on August 14, 2018, eclipsing all but five days in the Index’s 7,966-trading-day-history.

With all due respect to U.S. dollar bulls, can the dollar’s recent performance really be characterized as “strong,” given the 255 basis point premium of 10-year Treasuries over German bunds (Sept. 13, 2018), the hawkish tenor of Fed jawboning, and YTD emerging markets (EM) currency collapses in Argentina (52%), Turkey (38%), Brazil (20%), South Africa (16%) and Russia (15%)? No market sentiment of the past several years has been more of a straw hat than U.S. dollar bullishness. Sorry folks, but it just hasn’t happened. 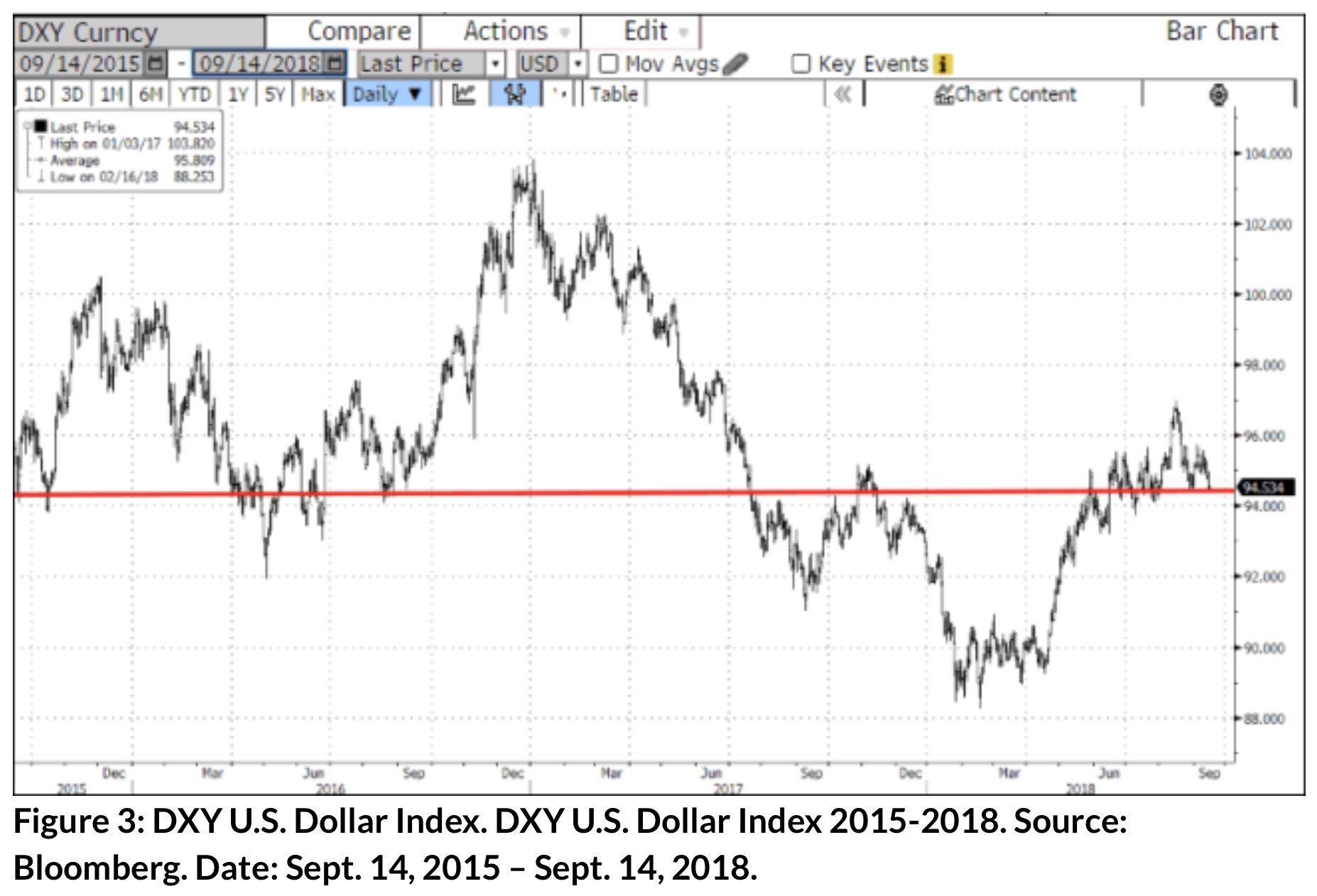 GOLD CONTINUES TO BATTLE CHALLENGING FUNDAMENTALS
On the gold side of the mix, we would suggest the jury is also still out. In reflexive similarity to the U.S. dollar, gold has faced a recent spate of challenging fundamentals, such as fresh highs for equity averages, hawkish Fed jawboning, perky 10-year U.S. Treasury yields and the never-ending strong-dollar narrative.

We suspect that the spec funds now short 21 million ounces of gold are scratching their heads as to why spot gold has not declined any further than $1,201.49 (Sept. 13, 2018). Indeed, it increasingly appears that gold’s mid-April through mid-August swoon (Figure 4) may have been precipitated at least in part by the very same hedge-fund shorting quantified in Figure 2 and memorialized by purple circles in Figure 4. What are spec shorts going to do for an encore? 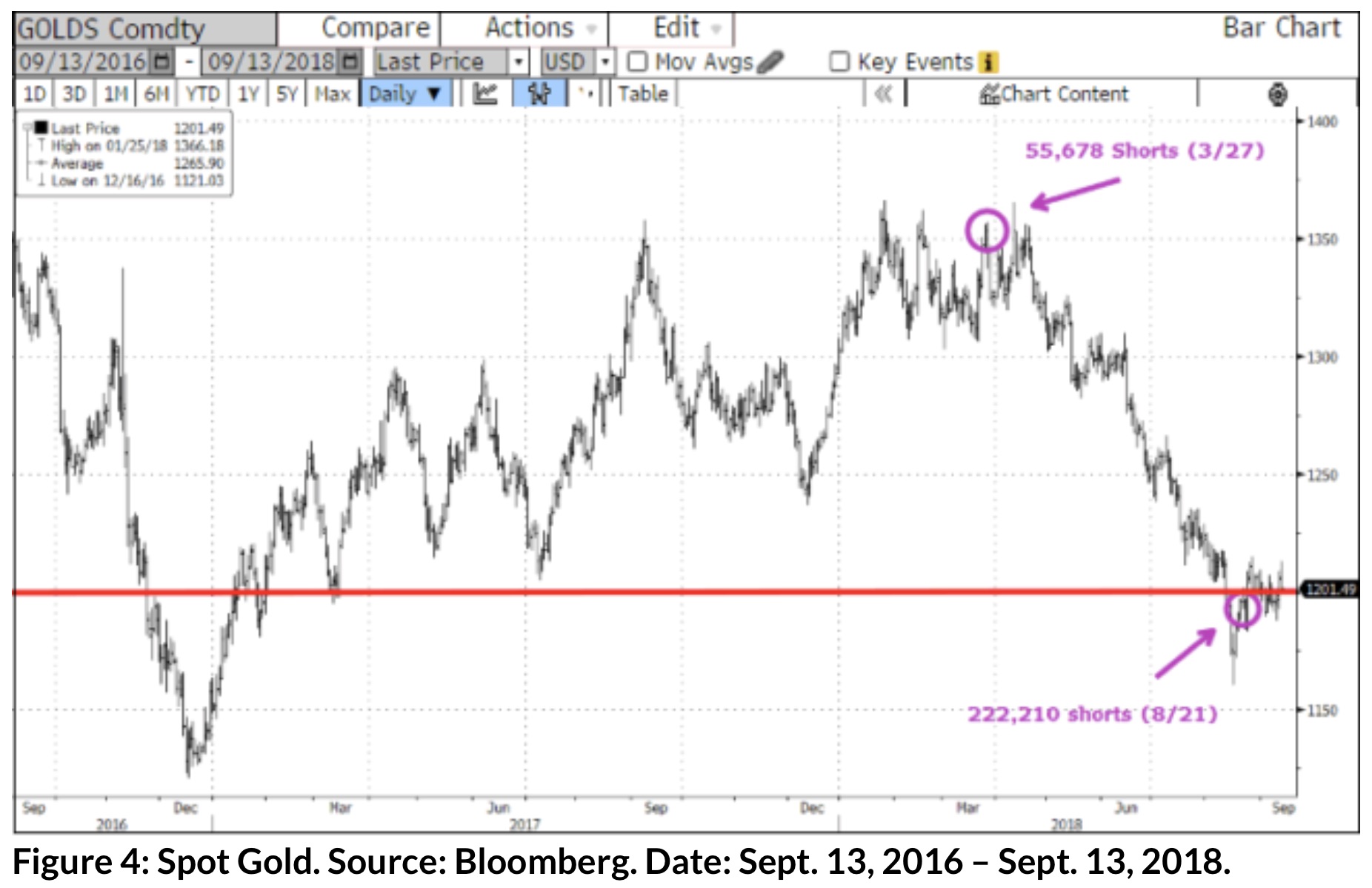 GOLD’S $1,200 FLOOR
Since early 2017, $1,200 has served as an effective floor for spot gold (red line in Figure 4). Indeed, ever since mid-2013, $1,200 appears to have been a line in the sand below which gold’s prominent physical markets begin draining western sellers (in the case of India, after adding roughly $150 of import duties to the prevailing global spot price). Without delving too deeply into paper-versus-physical dynamics of gold markets, suffice it to say that western investors are woefully uninformed about the economic and cultural status of physical gold around the globe. Especially in the United States, investors typically scoff at the suggestion that gold equates to real money. Contrary to U.S. consensus, however, there are billions of people around the world who actually view gold as preferred money.

Briefly, the World Gold Council (WGC) estimates that 2017 supply and demand for physical gold balanced around 4,400 metric tons (tonnes) with global mine production totaling 3,305 tonnes. Of the 4,400-tonne total, WGC calculates that global consumer demand measured 3,224 tonnes or 72% of global demand and 98% of global mine production. China and India together accounted for fully 55% of total consumer demand (1,776 tonnes). By comparison, U.S. consumer demand totaled a mere 160 tonnes in 2017, or less than 5% of the global total.

Now here’s the fun fact. Despite negligible U.S. participation in physical gold markets, COMEX traded 73 million paper gold contracts in 2017, equivalent to 227,053 tonnes of gold, or roughly 70 times global mine production. Why are these statistics of interest? Because any economy, market or society representing less than 5% of physical consumption of any product or commodity, which simultaneously traffics paper claims measuring 7,000% of that product’s global production, is prone to missing a few subtleties about that product’s true supply/demand characteristics.

Figure 5 offers the 2018 vintage of bearish COMEX specs a daunting preview of the intractable forces they are about to confront. Highlighting just four of the world’s countries where gold is preferred over U.S. dollars as money fit for savings (India, China, Russia and Turkey), Figure 5 details publicly disclosed statistics for various conduits of physical gold consumption since 2005. For India and Turkey, government import figures are referenced. For Russia, publicly disclosed changes to Russian central bank holdings are shown, and for China, monthly physical withdrawals from the Shanghai Gold Exchange are summed with disclosed changes in PBOC (People’s Bank of China) holdings. The graph’s top panel chronicles cumulative physical gold consumption since 2005 as 31,642 tonnes. 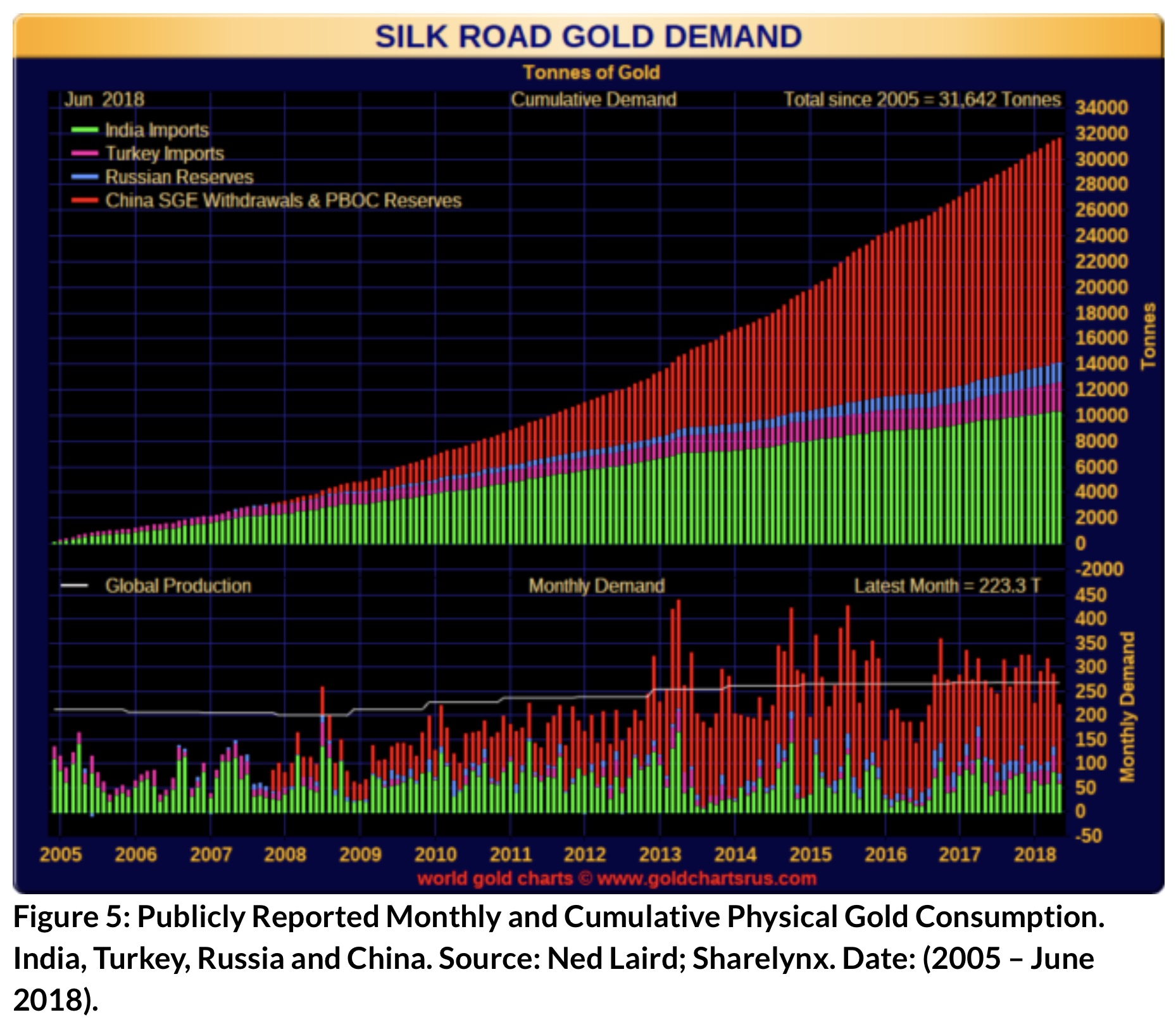 STAUNCH PHYSICAL DEMAND FOR GOLD DEFIES BEARISH COMEX.
PYROTECHNICS AHEAD?
The message COMEX shorts are about to receive is that gold buyers in India, China, Russia and Turkey don’t care much about the Fed’s dot plot or Q3 GDP. As we await rebirth of western investment demand in gold markets, we suspect an imminent clash between hyper-bearish COMEX spec positioning and staunch global physical demand is about to ignite some short-term pyrotechnics. This should be interesting to watch.

1. The Daily Sentiment Index (DSI) gathers the opinions of traders on all active U.S. futures markets; the DSI is used to spot and trade short-term market swings at extremes in small trader market sentiment.

2. The U.S. Dollar Index (USDX, DXY, DX) is an index (or measure) of the value of the United States dollar relative to a basket of foreign currencies, often referred to as a basket of U.S. trade partners’ currencies.

WTF Is Going On Here?