On the heels of more carnage in global markets to start the new year, today the man who has become legendary for his predictions on QE, historic moves in currencies, and major global events, warned this will be the worst crisis the world has ever experienced.

Very few problems start in the centre. Instead trouble normally starts in the periphery. When an empire falls, it is normally the furthest away provinces where trouble starts. It seems insignificant at the time and therefore is ignored by the rulers. Eventually the problem reaches the centre but then it is too late to do anything about it…

Egon von Greyerz continues:  And this is exactly what we will see in the gold market. Gold is currently strengthening against most currencies, commodities and other asset classes. Probably starting in 2016, gold will also rise against the US dollar. More accurately all currencies will compete in the race to the bottom. The real value of gold virtually never moves. It has maintained its purchasing power for 1000s of years.

What moves is the value of fiat or paper money. Governments are by their very nature irresponsible and incompetent. They can only hold on to power for a very limited time applying sound monetary and fiscal principles. Soon they must resort to excessive borrowings and money printing in order to buy votes. Voltaire said it already in 1729:

Gold reveals economic mismanagement
Since a strong gold price is a reflection of economic mismanagement, governments will use all means to suppress the price. This is what we have seen blatant examples of since 2011. Demand for physical gold, especially from China and India is stronger than ever. Also, production is stagnant and cost of production has risen significantly in this century.

The gold inventory of bullion banks has gone down by 2/3rd since 2011 and there are 300 paper claims for every one ounce of physical gold in the futures market. The physical market is under real pressure and at some point very soon, when holders of paper gold ask for delivery, there will be no physical gold available and the price will rise vertically.

US economic fundamentals weak
The gold price is normally measured in US dollars but that is of course a fallacy. Only 300 million people have the dollar as their currency out of 7 billion. Gold should always be measured in the currency of the investor and not in US dollars. The dollar is currently temporarily strong in its long term downtrend against many currencies. It makes no sense whatsoever that the dollar is rising with the very poor underlying fundamentals of the US economy.

The US has not had a real budget surplus for over 50 years. Nor have they had a current account surplus since the early 1970s. US federal debt has grown exponentially since the Great Financial Crisis started in 2007 and the Fed’s balance sheet has exploded. After many years of monetary stimulus with QE and zero interest rates, the Fed decided to raise interest rates as the economy is weakening. As usual they haven’t got a clue and are totally out of sync with reality. It will not be long until rates are reduced again and money printing starts on a massive scale.

The US dollar is next to fall
But until then, the world has an unjustified faith in the dollar. The dollar is only temporarily strong in spite of the awful fundamentals outlined above. That is the undeserved privilege of being the reserve currency of the world and the currency which has been used for trading oil. Many countries are now gradually stopping to trade oil in dollars and with an oil price at $30, a lot less dollars are in circulation already.

Gold has now been weak in US dollars for over three years. But that is more due to dollar strength than real gold weakness. The gold correction low in most currencies was in 2013. But in dollars the gold low was at the end of 2015.

Gold in the “periphery” or in other currencies, which few people focus on, has been a lot stronger. And what happens in the periphery will soon reach the centre.

Let take a look at gold in the Russian Ruble. Since 1999 gold has gone up 14 times and outperformed most asset classes.

Brazil was the Wunderkind of the BRIC euphoria. But it didn’t last long. Gold in Real is up 14 times since 1999 and is now making new highs

Argentina is infamous for its chronic economic problems and currency devaluations. Since 2001 gold has gained 6,000% in Reals. Owning gold in such an economy can be the difference between total ruin and comfortable living.

Gold in Canadian dollars bottomed in 2013 and is up 23% since then. Currently Gold in Loonie is just 10% below the 2011 high (monthly close) and in a strong uptrend.

Gold is not just strong against most currencies. Gold is often called a commodity. But gold is no such thing. Gold is nature’s only real money. This is why gold currently is outperforming all commodities. The chart below shows that gold has outperformed oil by over 500% since 2008.

Most investors consider that they have done reasonably well in the stock markets this century. But the rise in stocks is primarily due to zero interest rates and printed money. In real terms – Gold – stock markets have done very poorly. The chart below shows that the Dow has lost 2/3 of its value in gold terms since 1999. In the next few years the Dow is likely to lose another 90% which would take it back below the 1980 1 to 1 ratio.

Gold has outperformed all assets this century
As the charts confirm, gold has outperformed virtually all asset classes in this century. But this is just the beginning. The world economy is now starting a very severe downturn. Compared to what we will see in the next five years or so, 2008 was just a light rehearsal. The global asset and debt bubbles must be unwound before the world can grow again. 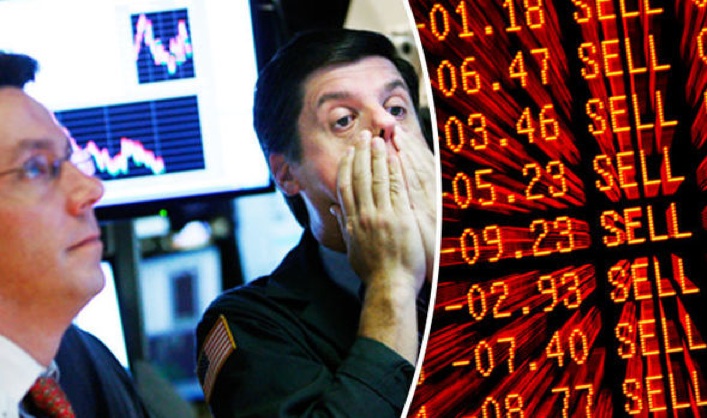 The Worst Crisis The World Has Ever Experienced
In spite of a 50% increase in global debt since 2008 to $230 trillion and zero interest rates, the world economy is now deteriorating rapidly. Add to that $1.5 quadrillion of mostly worthless derivatives and a very serious geopolitical situation and we have the “perfect scenario” that is going to lead to the most serious crisis that the world has ever experienced.

For the very privileged few who have savings, physical gold will be the best way to preserve wealth against the coming currency and economic collapse.

***To hear the powerful KWN audio interview with Nomi Prins, the keynote speaker who recently addressed the Federal Reserve, IMF And World Bank, CLICK HERE OR ON THE IMAGE BELOW.

Greenspan, Stagflation And What It Means For Commodities, Gold & Silver