A key turning point is upon us, plus is the crack-up boom here?

A Key Turning Point Is Upon Us
December 28 (King World News) – Otavio Costa:  A key turning point in equity market is upon us. The ratio of overly hyped growth stocks vs. unloved miners is near historical high. This has been a great barometer of risk in the last 30 years. 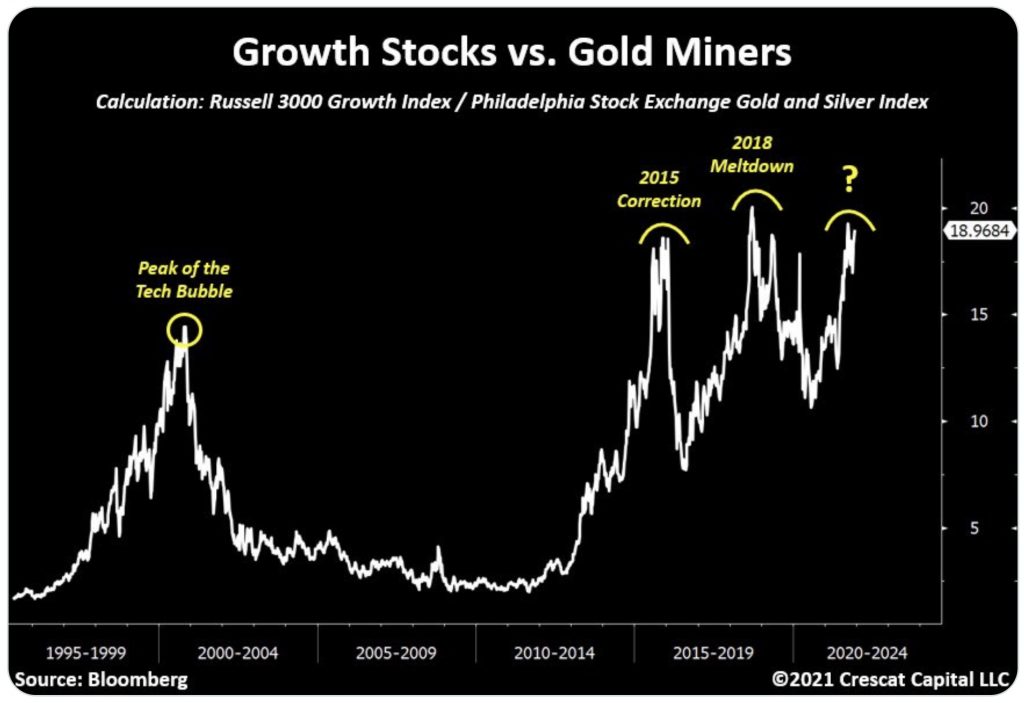 We saw a similar level of imbalance at the peak of the tech bubble. Back then, growth stocks reached unsustainable valuations while PM miners were in the process of bottoming. Today, however, as in late 2015 and 2018, this ratio is currently at even more excessive levels…

Is The Crack-Up Boom Here?
Ron Paul:  Bloomberg News recently solicited advice from Argentinians who lived through that country’s high inflation on how Americans should cope with rising inflation. The Argentinians suggested Americans spend their paychecks as fast as possible to avoid future price increases. They also suggested taking out loans that can be paid back later in devalued currency.

These strategies may make sense for individuals. However, encouraging debt and discouraging savings is disastrous for the country. Relying on debt and spending one’s paycheck immediately encourages people to seek instant gratification instead of planning for the future. This depletes both economic and moral capital.

November’s 9.6 percent increase in the producer price index, combined with the consumer price index’s increase to levels not seen since the early 1980s, shows why fears of inflation have become the public’s number one concern. Even the Federal Reserve has acknowledged that inflation is not just “transitory.”

The Fed recently announced it is accelerating the timetable to reduce its monthly purchases of Treasury and mortgage-backed securities. The Fed also announced it is planning three interest rate increases next year. However, the Fed plans to increase rates by no more than one percent. So even if the Fed does follow through on its promise to hike rates, it will do little if anything to combat rising prices. If the Fed allowed interest rates to rise to anything approaching market levels, it would make the federal government’s debt servicing costs unsustainable. This puts tremendous pressure on the Fed to maintain low rates.

The biggest victims of the Federal Reserve’s erosion of the dollar are lower- and middle-class Americans whose paychecks do not keep pace with the Fed-caused price increases. Yet many progressives still cling to the fallacy that average workers somehow benefit from continued dollar devaluation.

Progressives are even pushing the Fed to increase its money printing and regulatory activities to fight climate change and racism. Federal Reserve Chairman Jerome Powell has embraced this “woke” monetary policy. President Biden’s reappointment of Powell and nomination of current Fed board member Lael Brainard (who is seen as more committed to a woke Fed than Powell) for vice chairman suggests the Fed will double down on this toxic mixture of cultural Marxism and so-called modern monetary theory.

Recent polls show Americans expect continued large price increases. This indicates we may be on the verge of what Ludwig von Mises called a “crack-up boom.” A crack-up boom occurs when the general population realizes that constant currency depreciation is a feature, not a bug, of central banking. This leads people to seek alternatives to government-issued currency and to factor rising prices into their plans. The crack-up boom will likely extend overseas as more countries reject the dollar’s world reserve currency status. This rejection will be driven by a combination of concern over America’s growing debt and resentment of America’s hyper-interventionist foreign policy.

Crack-up booms have historically facilitated the growth of authoritarian political movements. However, this is not inevitable. If those of us who know the truth spread the ideas of liberty to enough people, we may be able to move through the crack-up boom to a rebirth of liberty, peace, and prosperity. Steps in this direction include convincing Congress to cut spending, legalize competing currencies, and end the Fed.

To listen to Matthew Piepenburg discuss why gold is set up for huge upside gains in 2022 as well as what other major surprises to expect next year CLICK HERE OR ON THE IMAGE BELOW.

To listen to Alasdair Macleod discuss why silver and gold are set up for huge upside gains in 2022 CLICK HERE OR ON THE IMAGE BELOW.