On the heels of the Dow tumbling more than 900 points, here is a look at a drop in the $42 trillion bucket, lowest in 23 years, plus a very tough month ahead.

A Drop In The $42 Trillion Bucket
April 1 (King World News) – Stephanie Pomboy:  What looked like a staggering increase in the Fed’s balance sheet when QE was first initiated in the dark days of 2008 was dwarfed by the repeated trips to the well that followed. Today will be different only in being larger still. $4 trillion is a drop in the $42 trillion bucket that is the US bond market (see below). 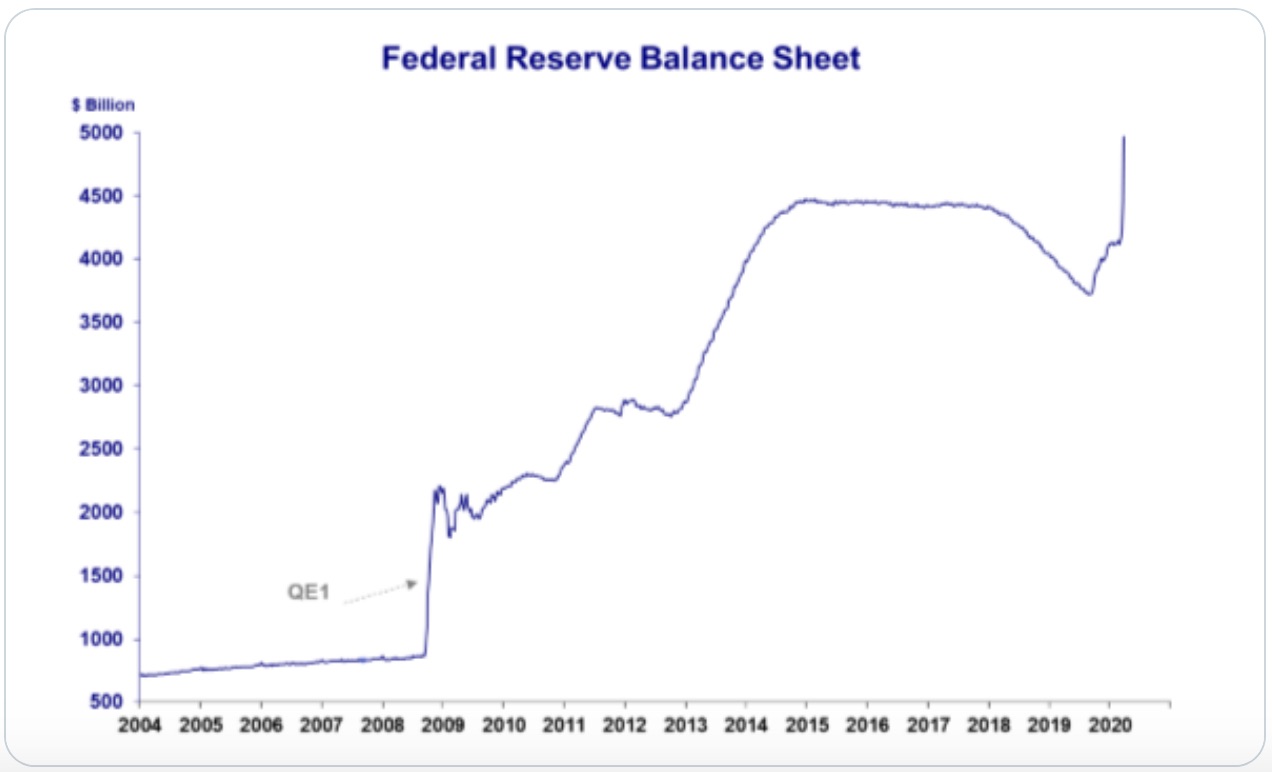 Very Tough Month Ahead
Peter Boockvar:  With what we know will be a very tough month ahead, we now watch how quickly the government money will get out there. Direct checks to individuals and families and unemployment benefits should be rapid but small and medium sized business help needs to happen fast of course. I’ve spoken to many and everyone asap is trying to figure out the process and how much they can get.

The rebound seen in stocks over the past week saw a decline in Bears to 36.3 from 41.7 and vs 32.7 in the week before according to Investors Intelligence. Most though went to the Correction side as Bulls were only up by 1.3 pts to 31.4. II said:

“A few editors bought into the recovery. Others said it was only a short term up move and more basing work would be needed.”

While April will be an extremely volatile month in terms of both the news flow and stock market reactions, I do think many are anticipating this. What is not priced in I believe because it’s obviously hugely unknown is what is on the other end come May. How contained will this virus spread be by then? To what extent will things begin to reopen, if at all? On the anticipation that it will take a lot of time (months to years) for things to resume normally again after April, there will certainly be some areas of the economy that will see quick snap backs. Previously delayed hair cuts, nail appointments, Dr. visits and elective surgeries, some summer clothes shopping, restaurants, etc… will certainly come back faster than big group gatherings like Disney World, concerts, baseball games, travel, big ticket factory production, etc…

Thanks to the Fed’s attempt to compress the spread between mortgage rates and Treasury yields (notwithstanding the negative side effects to the actual functioning of the mortgage market), the average 30 yr mortgage rate fell to 3.47% from 3.82% and that is a record low.

It helped to drive a 25.5% week over week increase in refi’s after last week’s 34% decline. Versus last year they are up 168%. Purchase applications dropped almost 11% after last weeks 15% decline and they are down 24% y/o/y. With the spike in unemployment, the last thing on the minds of many is what new house does one want to buy.

Similar to what the Chinese state sector weighted PMI’s reflected the private sector Caixin said its manufacturing index rose to 50.1 from 40.3 and that was better than the estimate of 45. Again, this is ONLY measuring the direction of change, not the degree as things start to reopen. The challenge though remains as:

“the pandemic continued to weigh on demand conditions and supply chains, with total new work falling for the 2nd month running and delivery times lengthening sharply.”

The Shanghai comp was lower by .6% with more weakness seen in the H share index which closed down by 2%.

Shifting to Europe, we saw their final PMI’s after the initial prints last week. The Eurozone manufacturing PMI fell to 44.5 from 49.2 in February and slightly below the initial read of 44.8. As stated on the Taiwan number, supply delays actually boosted the figure in the quirk of the number as historically “supply delays are normally seen as a sign of rising demand, but at the moment near record delays are an indication of global supply chains being decimated by factory closures around the world” according to Markit. Food manufacturing and pharmaceuticals are the only areas seeing growth. The euro is lower as are stocks with bond yields mixed.

“supplier delivery times lengthened to the greatest extent in the 28 yr survey history as shortages grew more widespread…The effects were felt across most of manufacturing, with output falling sharply in all major sectors except food production and pharmaceuticals. The transport sector, which includes already beleaguered car makers, suffered the steepest downturn.”

The pound is down as is the FTSE with gilt yields lower.

Markets, Gold And Economic Devastation
***Also Released: Wild Trading In Markets, Gold, And How Many People Are Being Devastated By The Economic Shutdown CLICK HERE.