Below is a big picture look at gold mining stocks.

Gold Miners Need to See Buyers Stick Around
August 5 (King World News) – Jason Goepfert at SentimenTrader:  Gold miners have been struggling to hold up with a multitude of cross-currents. They’ve gone almost nowhere for a month and a half, though they finally started to show some life in recent sessions…

Thanks to their tepid early summer, over the past 20 days, an average of fewer than 12% of gold miners were trading above their 50-day moving average. That is now starting to curl higher. 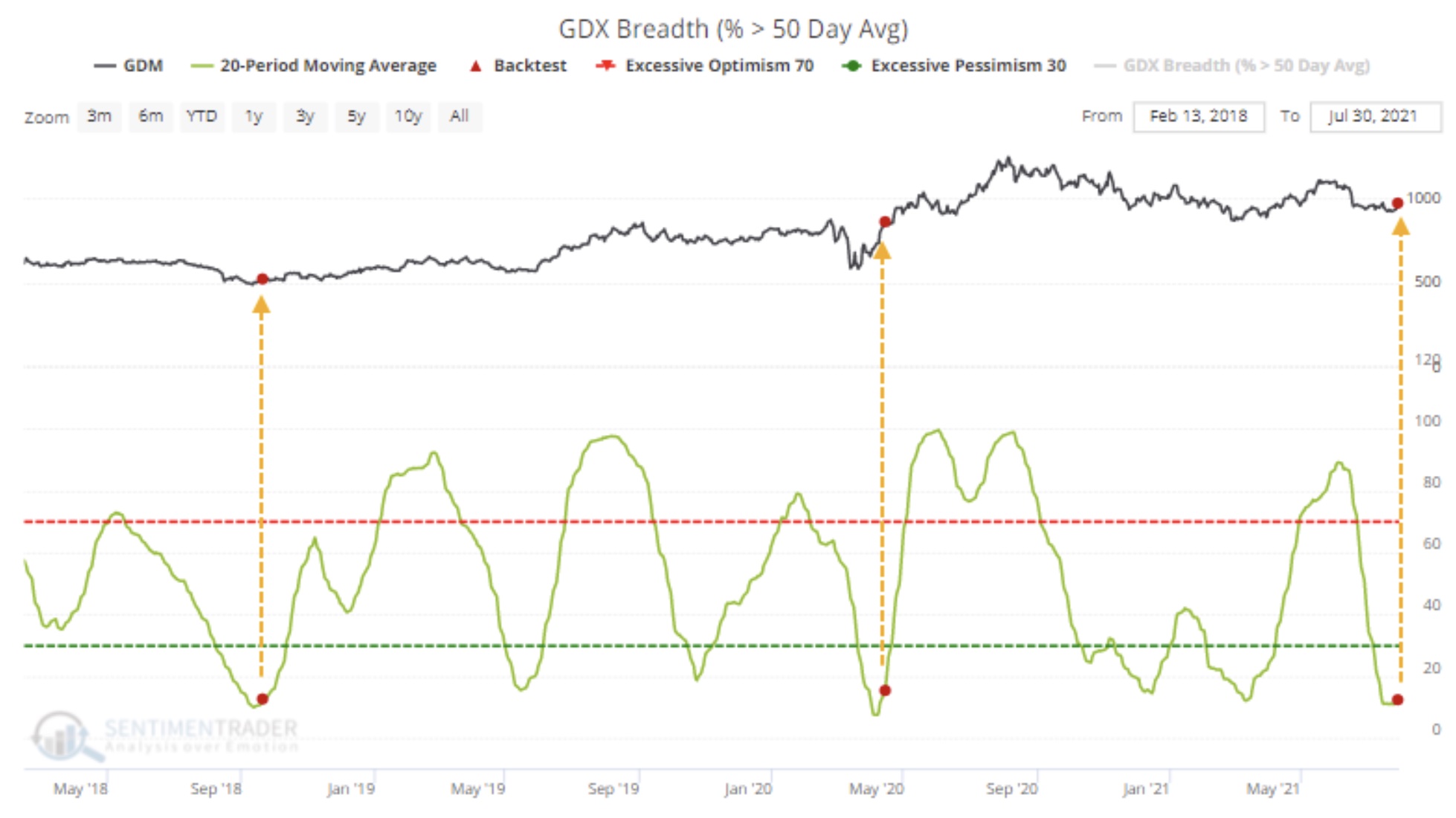 The last two times this triggered in the past few years, it preceded sustained rallies in the miners. Even lesser extremes led to further price gains.

HISTORY SUGGESTS WATCHING THE SHORT-TERM
The Backtest Engine shows that miners often fell back in the very short-term before recovering over the next couple of months (click the Backtest Engine link to load this test). These are times when the 20-day average of medium-term breadth was below 12% then crossed above. 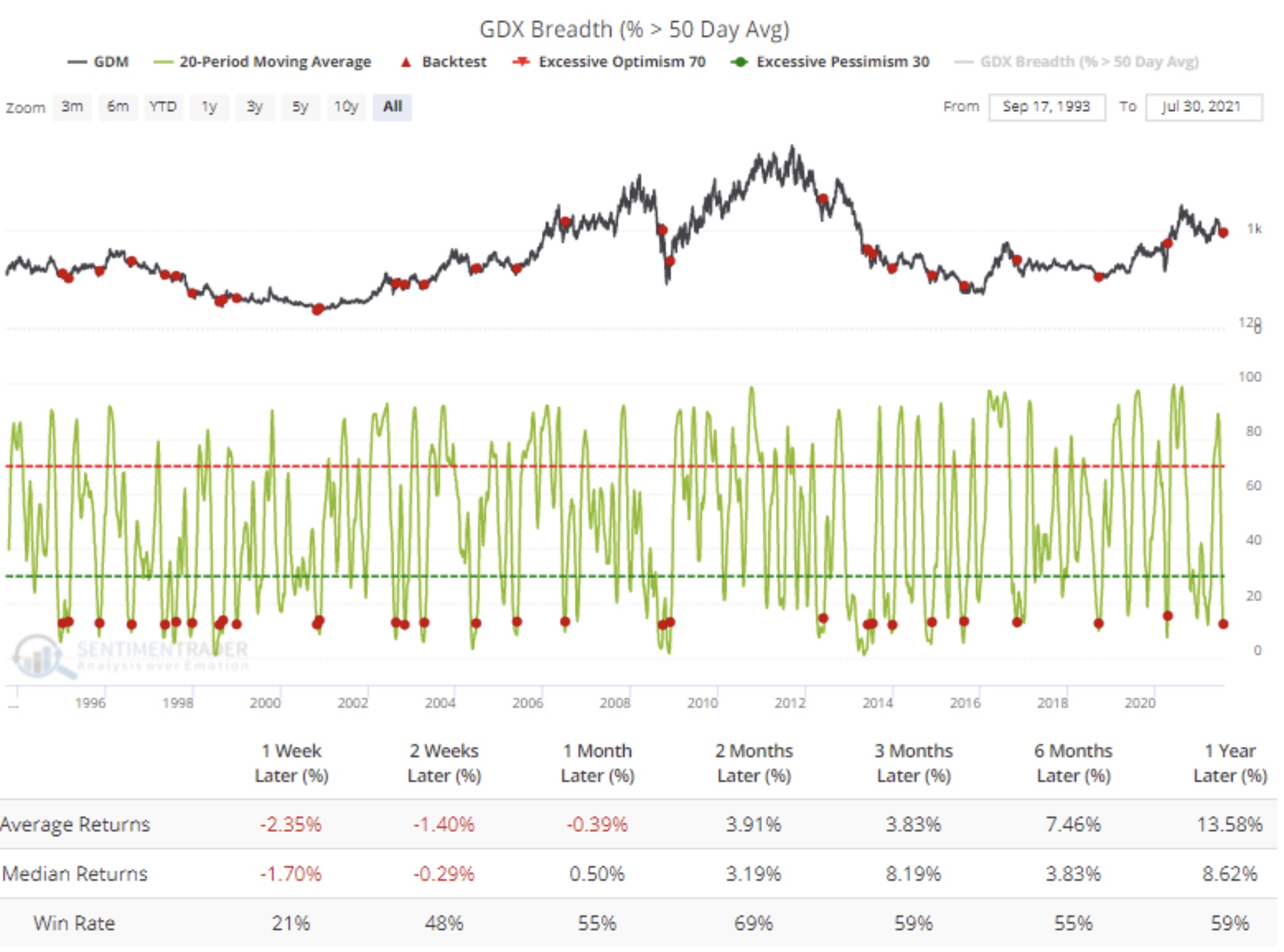 Going back further, there was a high correlation between returns over the next two weeks and those over the next six months. The “correlation” row at the bottom of the table shows this relationship. This suggests that if buyers are interested enough to continue the nascent recovery from oversold conditions, then there is a decent probability that they will continue to do so in the months ahead. 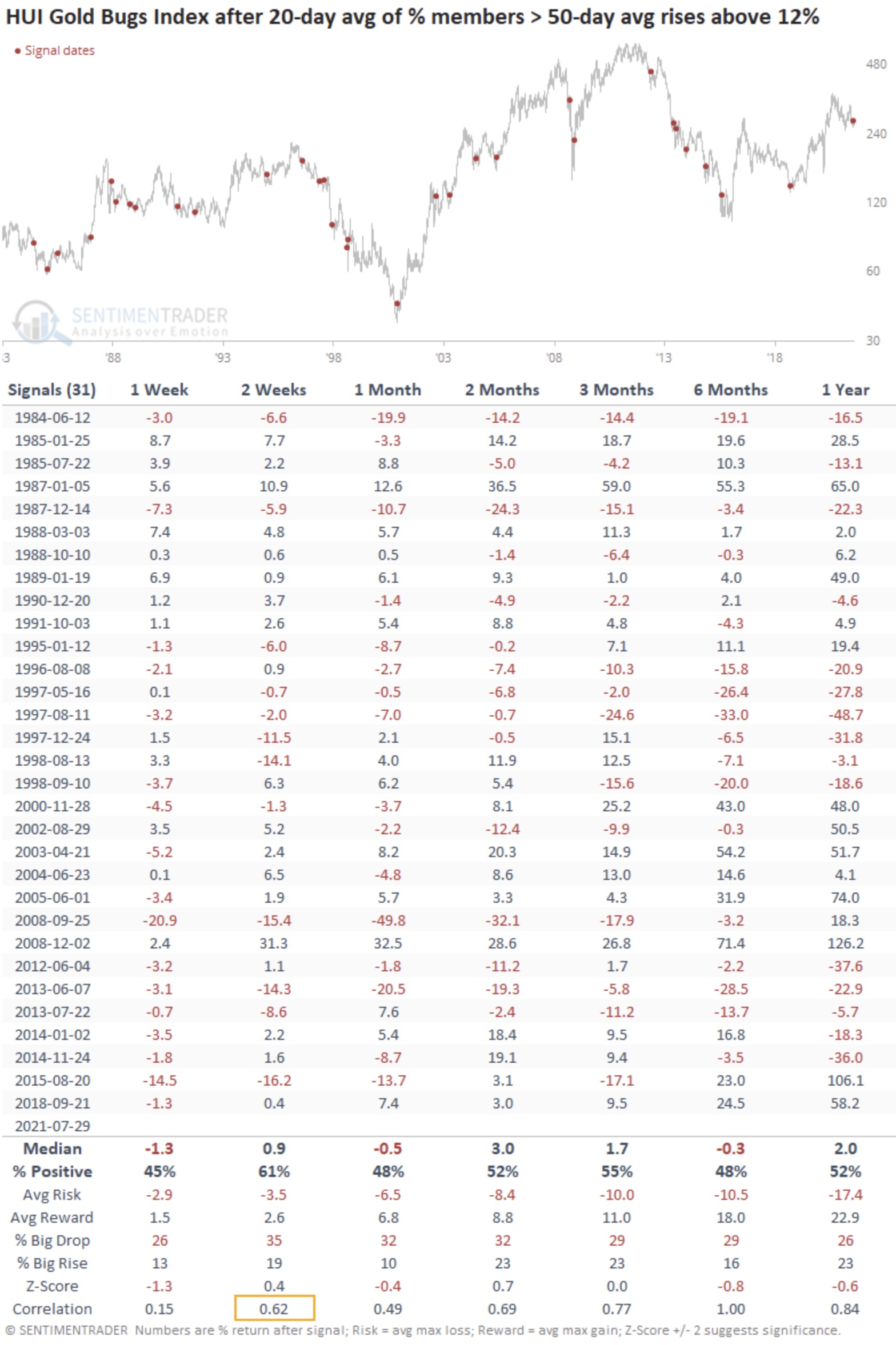 SOME LONGER-TERM WORRIES
Long-term, there are worries. The percentage of miners in a bear market, more than 20% off their 52-week highs, is rolling over from a very high level. The Backtest Engine shows weak short-term returns again, and these had more of a tendency to persist. 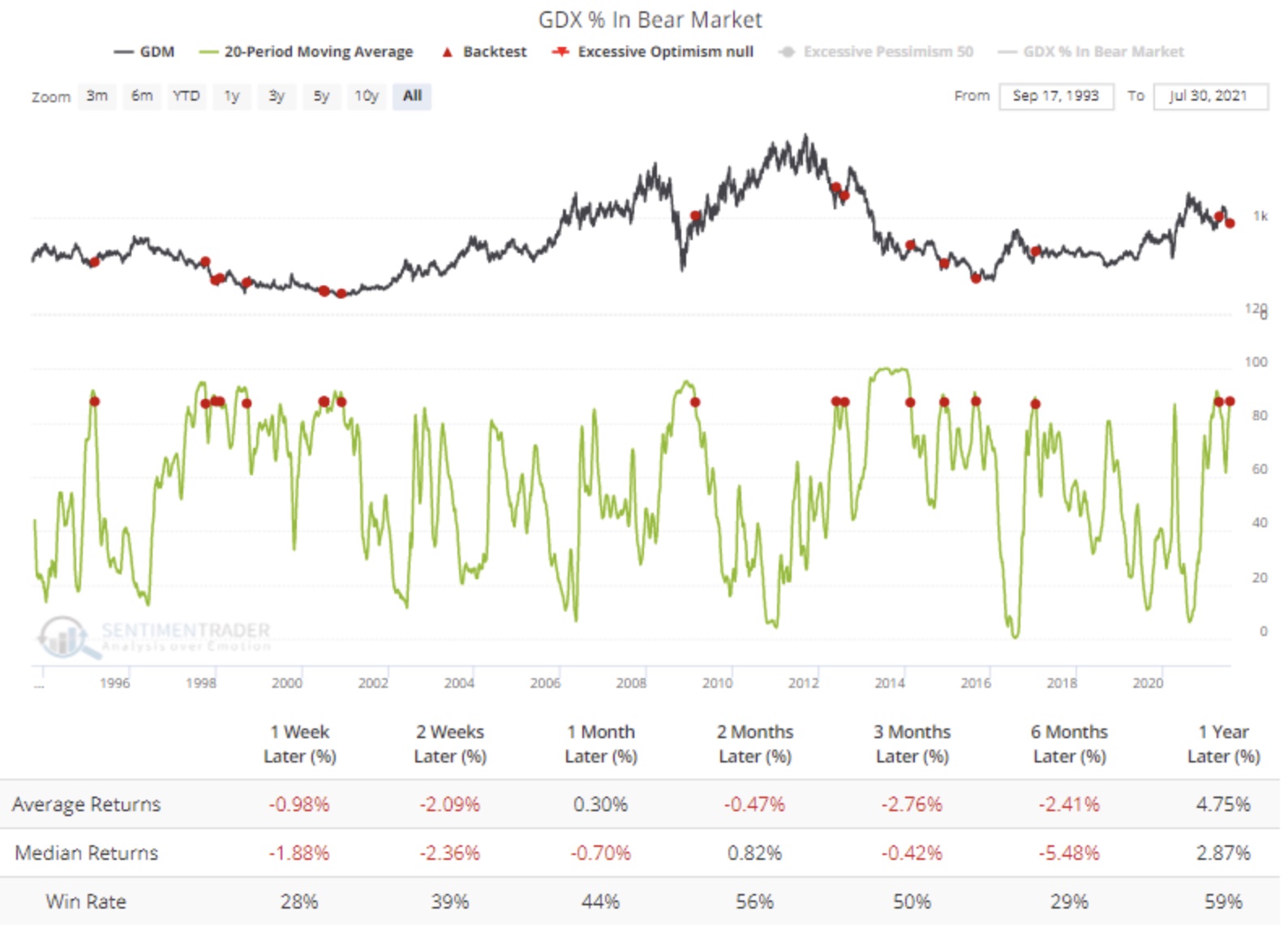 Fewer than 15% of gold miners had a rising 200-day moving average, which is starting to curl higher. The Backtest Engine shows us that once again, short-term returns were weak. 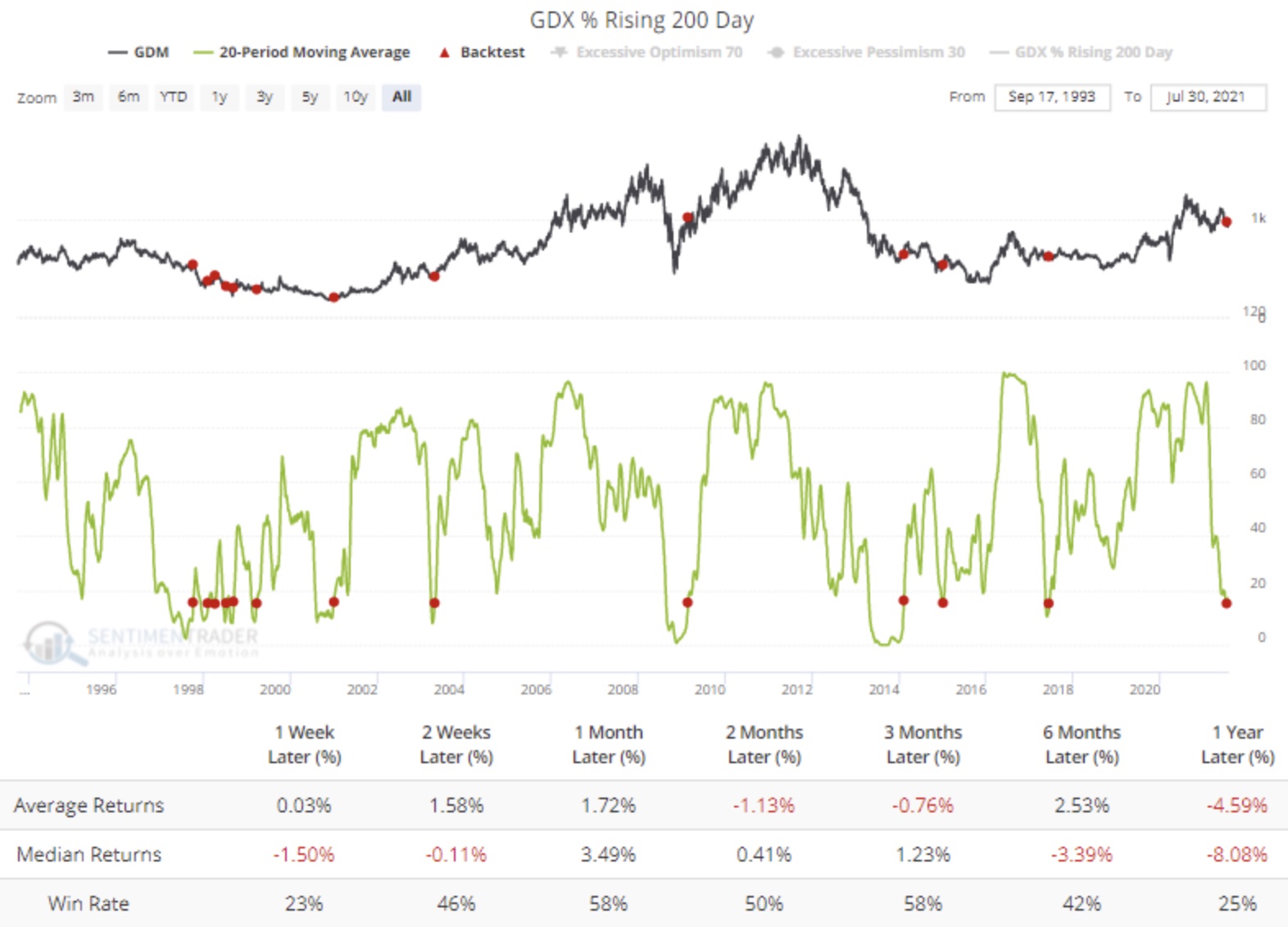 There was a recent spike in 52-week lows, with 22% of gold miners hitting that extreme recently. The Backtest Engine shows decent returns following an ebb in a rise in new lows. 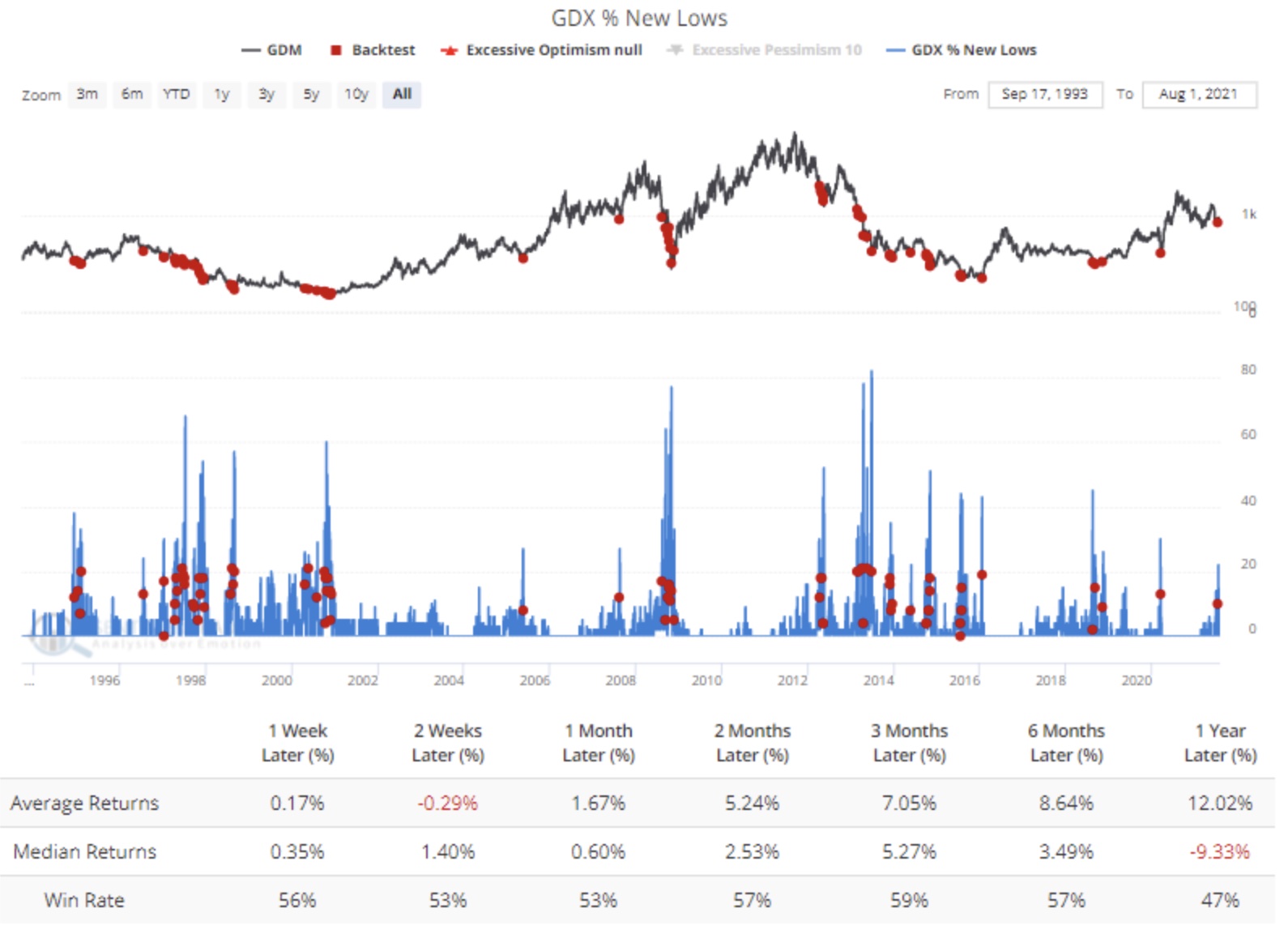 None of these are especially encouraging for gold investors and those who prefer to focus on real companies in the sector instead of a commodity. Breadth among miners has been poor on all time frames, but not so poor that it suggests a high probability of a long-term washout among sellers. The momentum thrust in 2020 has some impressive precedents for long-term gains, but bulls will want to see buyers willing to step in soon. This is another example of why Jason Goepfert is the best in the world at what he does – providing actionable market data. To subscribe to the internationally acclaimed work Goepfert produces at SentimenTrader CLICK HERE. 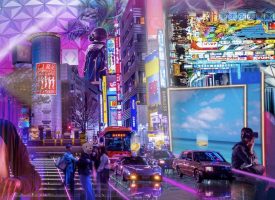 Central Banks, Gold And The Metaverse