December 17 (King World News) – Jason Goepfert at SentimenTrader:  Well, it’s official. We’re in a rising rate environment, and most of us are probably already tired of hearing about it…

Jason Goepfert of SentimenTrader continues:  Markets, in general, cheered the news, which is what usually happens when the Federal Reserve follows through on what it said it was likely to do.

The knee-jerk reaction looks like an expectation of higher inflation. Stocks, gold and note yields all rallied strongly.

Looking at all rate hikes since 1971, this is only the third time all three rallied at least 0.5% on a day the Fed hiked their target rate.

We’d never seen the three markets act like this on the first hike in a cycle, though (see chart below). 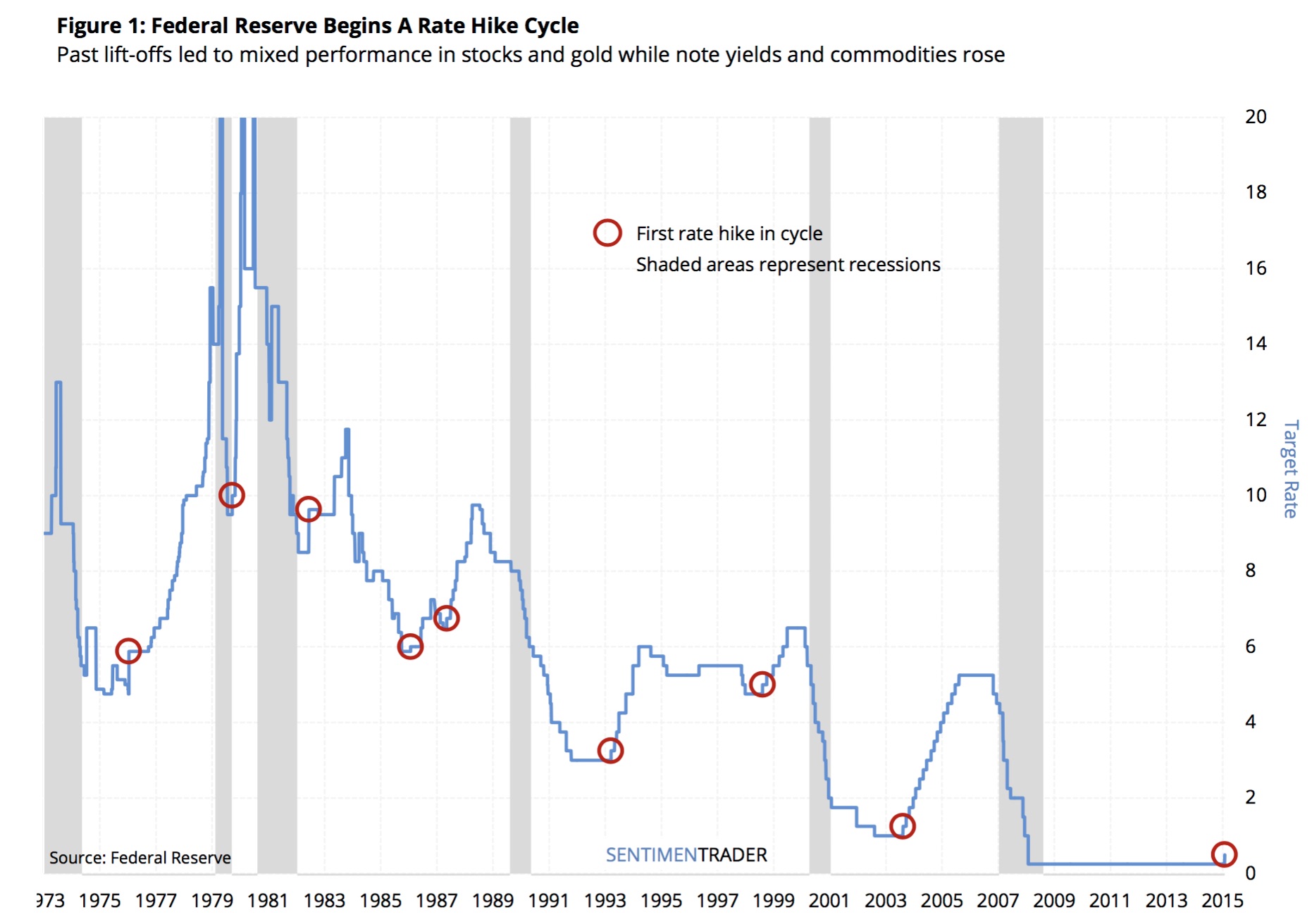 It wasn’t that unusual to see stocks and gold rally, but yields typically declined on the day of the hike…and then rally strongly in the weeks and months ahead.

Looking at future returns in all three markets going forward, the most consistent performance was from yields, which rallied every but once over the medium- to long-term (see chart below).

The last three cycles all saw stocks stumble during the next three months, but that was not the case prior to the past 20 years.

Gold has lately witnessed shorter-term losses, which were mostly erased during medium-term rallies (see chart below).

It’s hard to find much of a pattern in these returns, other than the tendency to see bond yields continue to rise.

Because commodities have been in such focus as they melt down, we also include returns for the Continuous Commodity Index (see chart below).

Like note yields, the index had a strong tendency to rise after the first rate hike. Losses were minimal a month later and got stronger from there.

Generally, big rallies heading into and immediately after a FOMC decision tend to lead to weakness in stocks over the short-term. If we’re only looking at the first rate hike, the only consistent performance longer-term was in yields and commodities (both rising). ***The charts and commentary are just a portion of one of the latest fantastic reports. To try a free 14-day trial of the internationally acclaimed work that Jason Goepfert produces at SentimenTrader simply CLICK HERE.

Former Soros Associate Says The ‘Fix’ Is In