Today a legend who was recently asked by the Chinese government to give a speech to government officials in China sent King World News a powerful piece that warns about a terrifying $250 trillion time bomb.  John Ing, who has been in the business for 43 years, also discussed parallels to the Great Depression, gold, and escalating currency wars.

By John Ing of Maison Placements

January 24 (King World News) – Ireland, Italy and Portugal all have public debt to GDP ratios in excess of 125 percent. European growth is anemic. Rhetoric has not matched the reality. Greece faced yet another election and Greek shares plunged over fears of a Grexit, reminiscent of only four years ago. The reality is that Greece and the other Eurozone members only deferred their problems while their debt crept higher.

Central banks should be listened to but investors would be wise to follow their actions, not their rhetoric. The slump in oil prices, and easing of German inflation has prompted the European Central Bank to conjure new euros to buy bonds with newly minted money despite the lowest returns ever. The successive rounds of money creation are to be shoveled into the system.

Negative interest rates exist in Switzerland, Germany and Japan reminiscent of the Great Depression. Money is not money any more. Sub-zero interest rates are the norm. We believe that sooner or later, there will be a need for money and rather than a mass produced fiat currency, capital will flow to that store of value that can be created without a push of the button.

Ironically, six years after the collapse of Lehman Brothers, the same conditions that triggered the financial crisis are in evidence today. One difference however is that while the private sector is recovering from a heavy debt load, the government sector has borrowed ever more, piling on debt to record levels using that credit to prop up anemic economies and prevent a global collapse.

But that debt failed to revive the private sector despite Keynesian-style low interest rates. Instead that debt boosted the balance sheets of central banks. Little trickled down to the economy. The problem is that the debt is secured by the faith and credit of the respective sovereign balance sheets. In more distressed nations like Greece, Venezuela and even Russia this now becomes a problem. Gold anyone?

The successive rounds of money creation are to be shoveled into the system. Negative interest rates exist in Switzerland, Germany and Japan reminiscent of the Great Depression. Money is not money any more. Sub-zero interest rates are the norm. We believe that sooner or later, there will be a need for money and rather than a mass produced fiat currency, capital will flow to that store of value that can be created without a push of the button.

Another problem is that the collapse in oil prices has raised risks in the world’s interconnected financial system. The world’s biggest banks possess some $250 trillion of energy exposure which are mismatched while leverage remains high. Russia’s central bank has already bailed out a mid-sized lender and the country faces a repeat of the late nineties when it defaulted on its obligations despite some $400 billion of foreign exchange reserves. Can the ruble go lower?

Meantime, gold is a safe haven amid concerns of weakening currencies. The stealth currency war removes the last shock absorber to the system. Gold is a barometer of investor anxiety. Today, the consequences of the oil collapse, renewed tensions in the Middle East, the unraveling of Russia and a repeat of the Eurozone crisis makes gold a much more compelling haven than the dollar.

Gold is a beneficiary of quantitative easing and has risen before every round of QE. Seven years ago, the Fed’s unveiling of QE was a catalyst in gold’s torrid bull run. Gold is also a hedge against central banks’ penchant of unpredictability in a world of competitive devaluations and negative interest rates. No one, it seems, remembers that it was massive monetary accommodation and rampant speculation that led to the bubble whose bursting caused the Great Depression.

Gold is an alternative investment to the dollar for these central banks – it is the newest old global currency in the world and a good index of currency fears. Gold’s bull market has just begun. ***ALSO JUST RELEASED: Did We Just Get Confirmation That Economist John William's Dire Prediction Is Now Unfolding CLICK HERE. 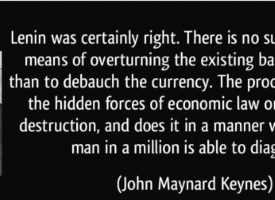