ONE OF THE GREATEST U.S. GOLD OPPORTUNITIES IN HISTORY!
Legendary Management Team About To Unleash A Massive Drill Program In The Greatest, Most Prolific Gold Belt In The World!

GOLD STANDARD VENTURES CORP. (NYSE: GGSV, TSX.V: GSV) Gold Standard Ventures is an advanced stage gold exploration company focused on district scale discoveries in the greatest and most prolific gold belt in the world at the Railroad-Pinion gold project on Nevada’s Carlin Trend. Gold Standard has continuously added value through land consolidation and discoveries. Since 2009, the company has consolidated the second largest contiguous land package (208 sq.km) on the Carlin Trend, as well as making discoveries at North Bullion (2010), Bald Mountain (2013) and North Dark Star (2015). The Railroad-Pinion project now hosts NI 43-101 compliant, near-surface, oxide gold resources at the Pinion Deposit (updated 2016) and the Dark Star Deposit (2015). The resources offer potential near-term development options, while the numerous discoveries illustrate the project’s district scale. The company has recently announced a 48,800m drill program for 2017, with numerous catalysts to follow. Symbol GSV on the NYSE MKT in the United States. 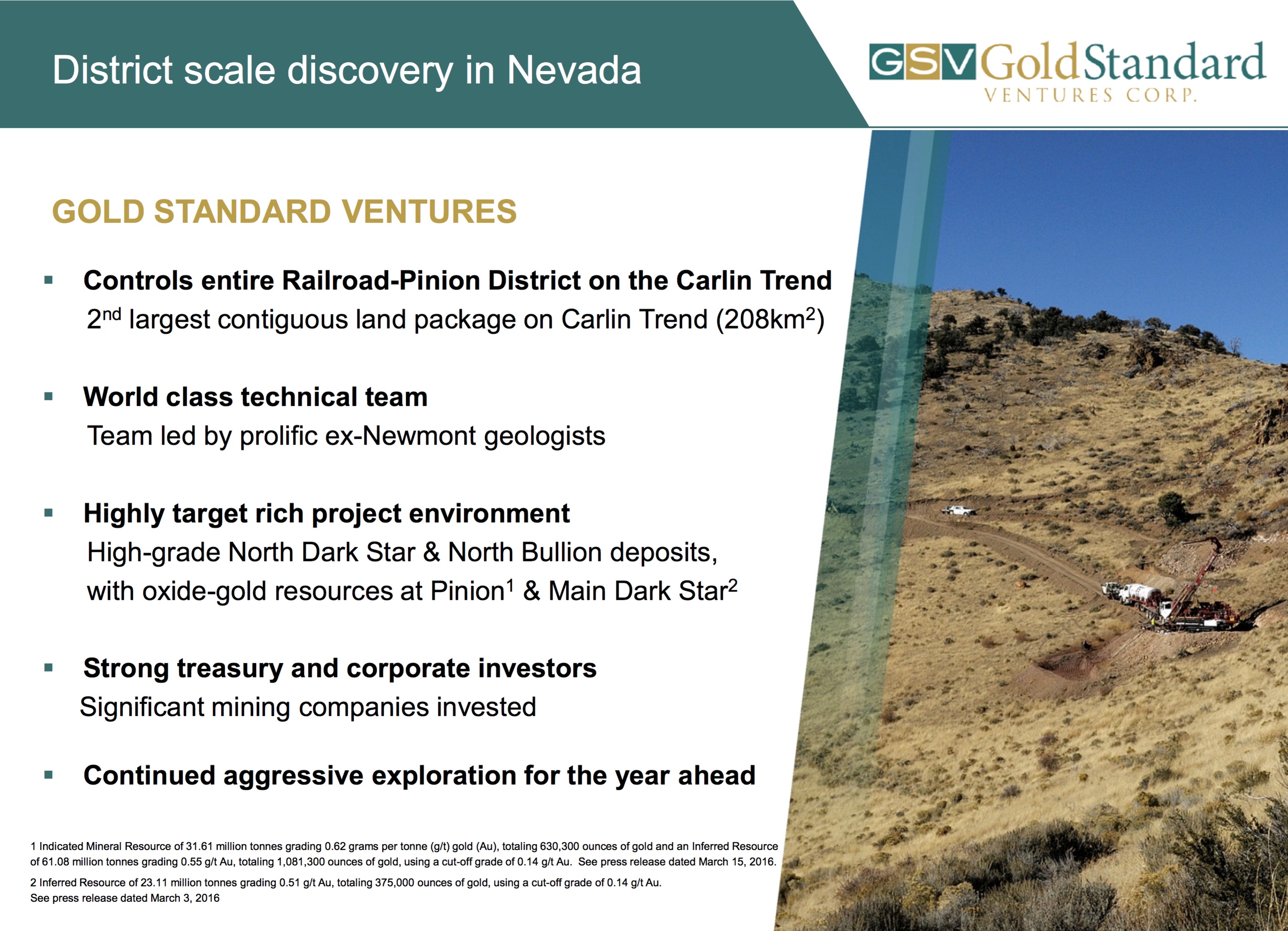 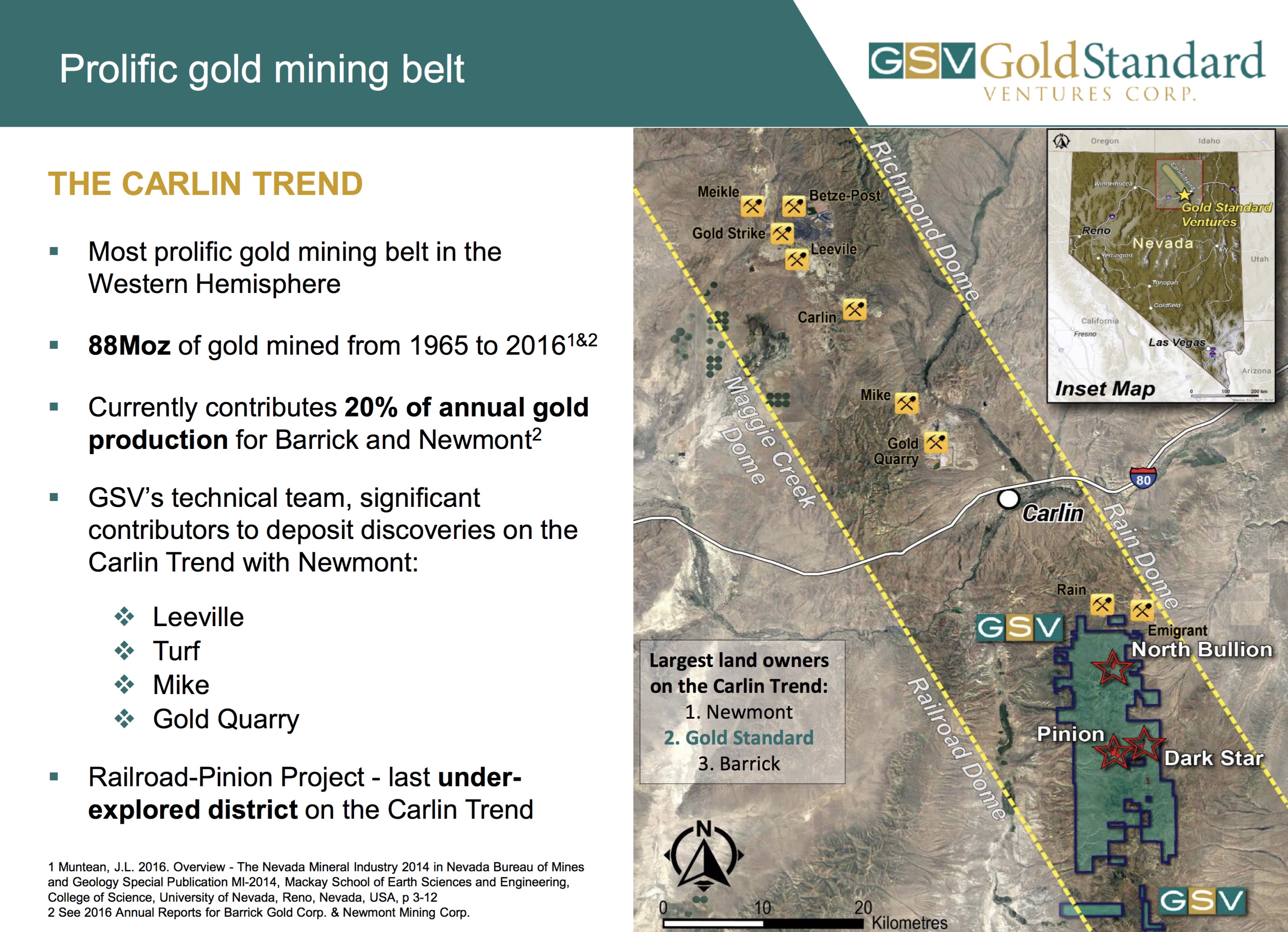 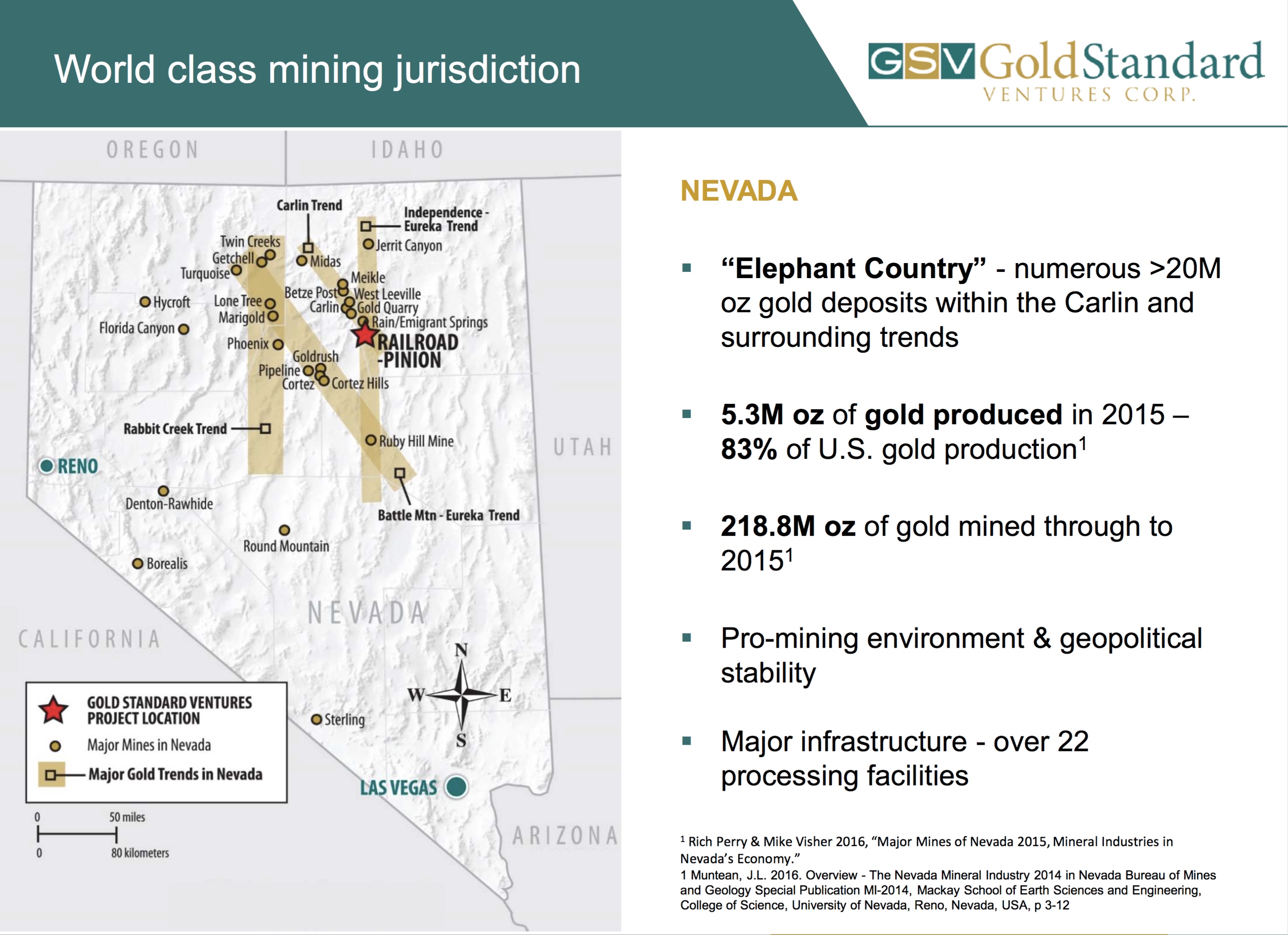 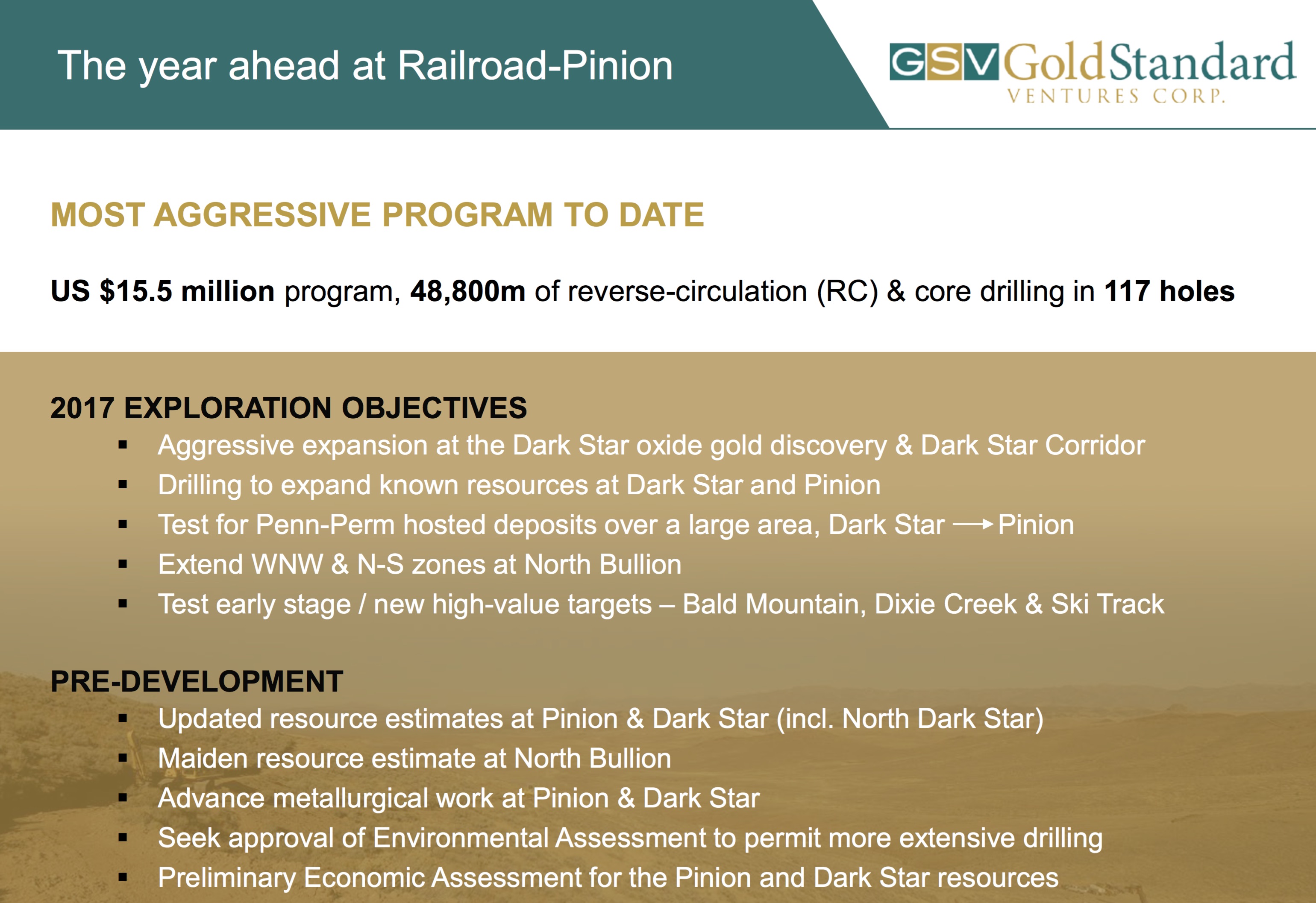 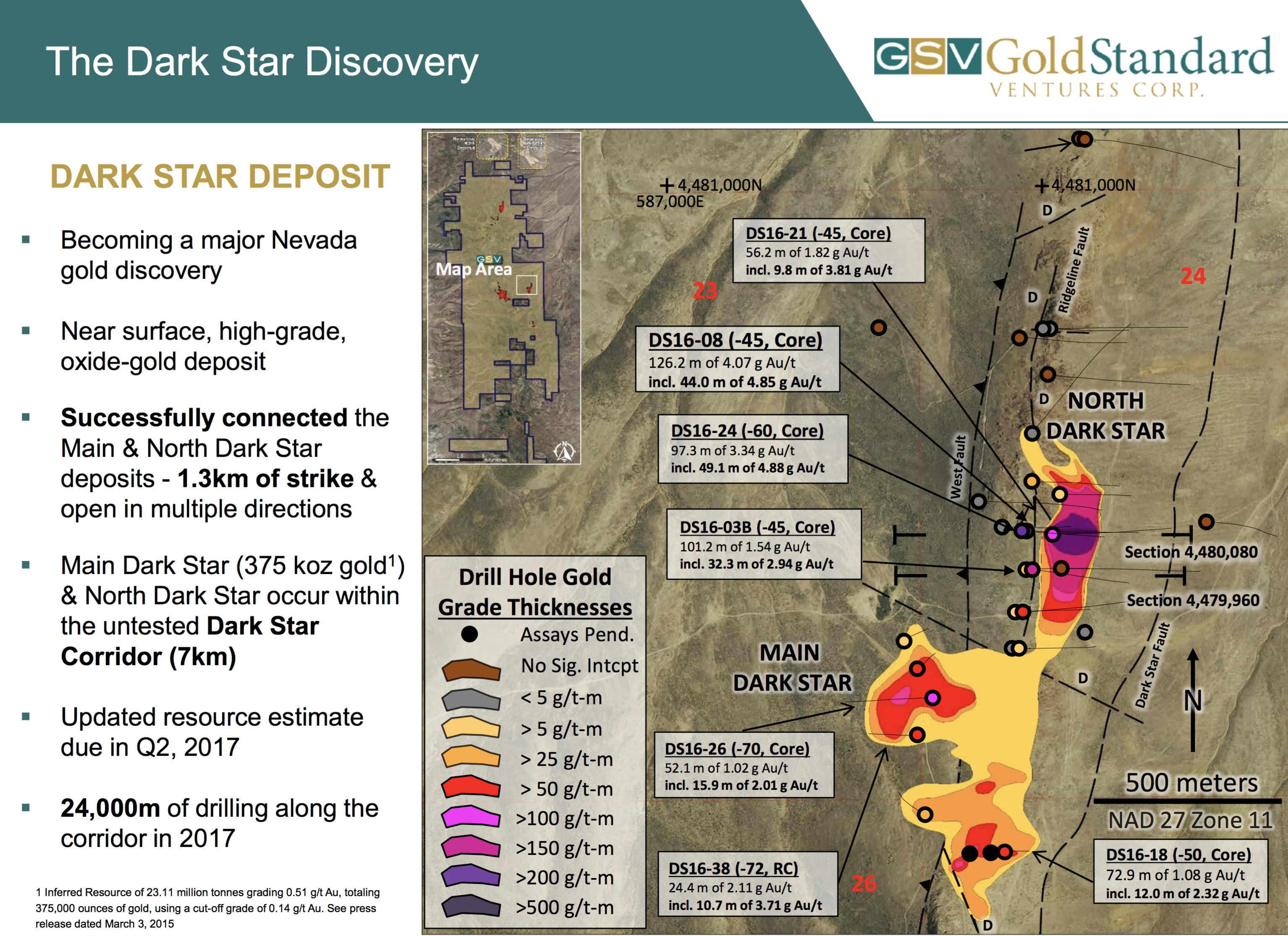 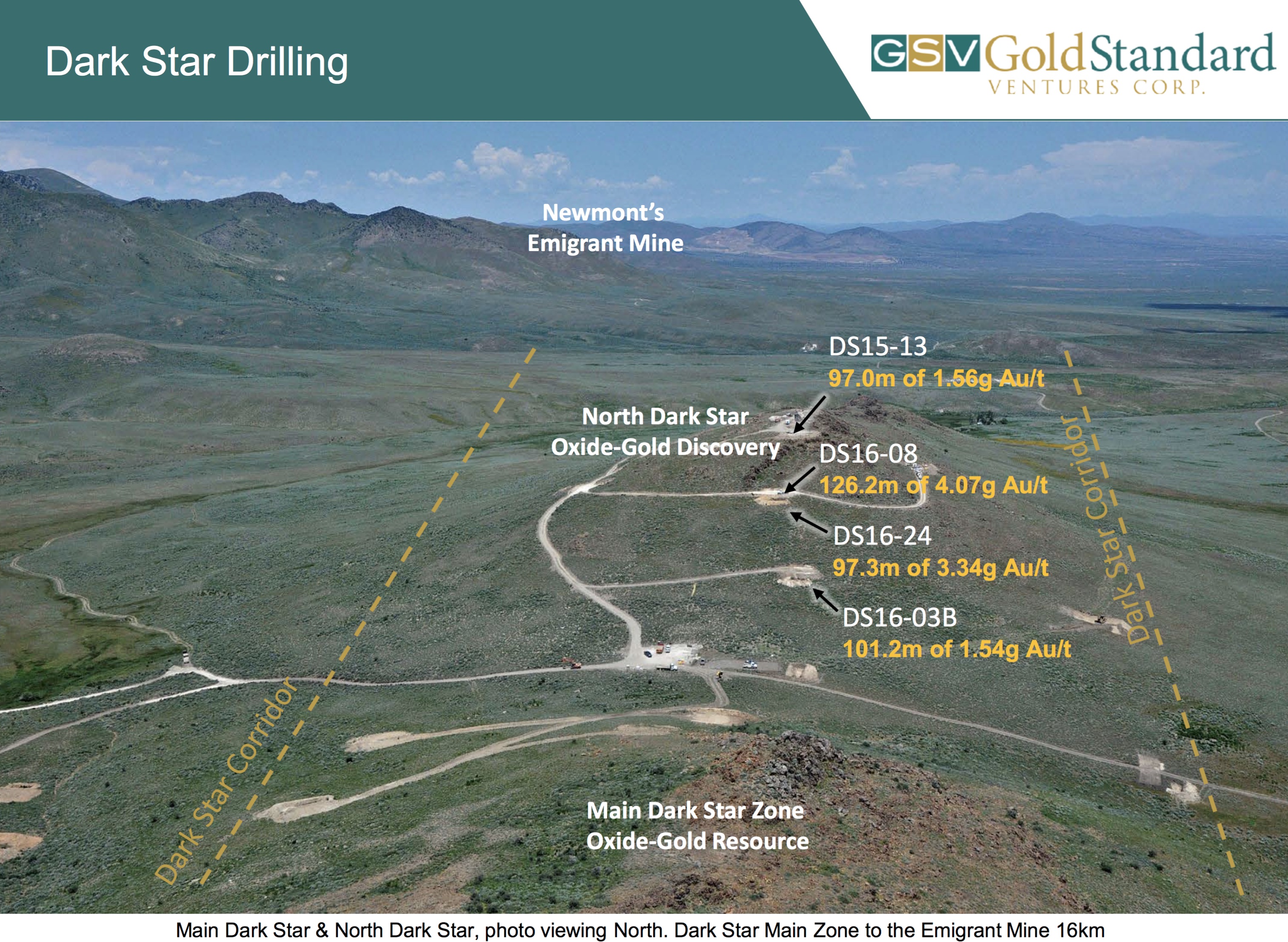 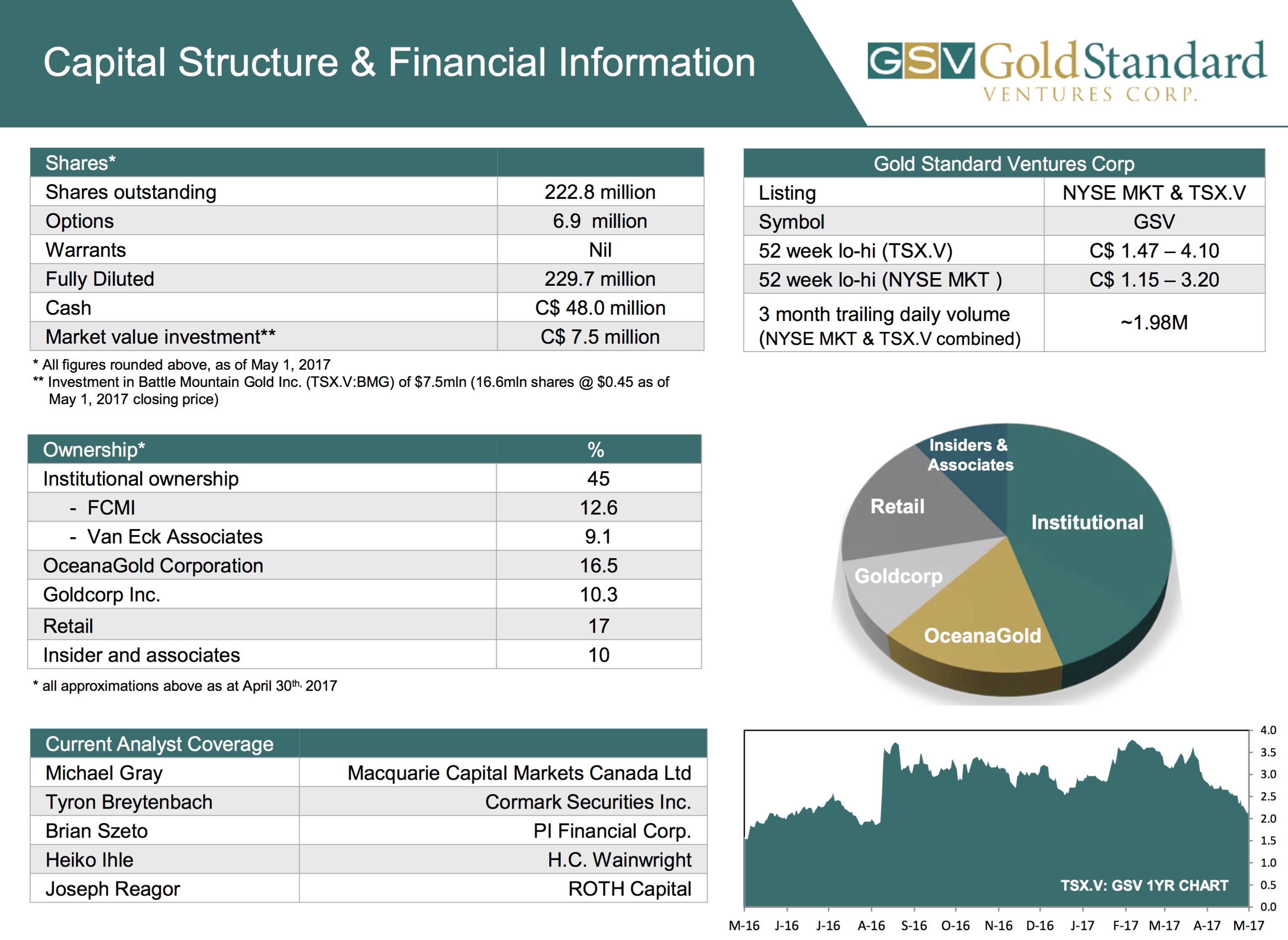 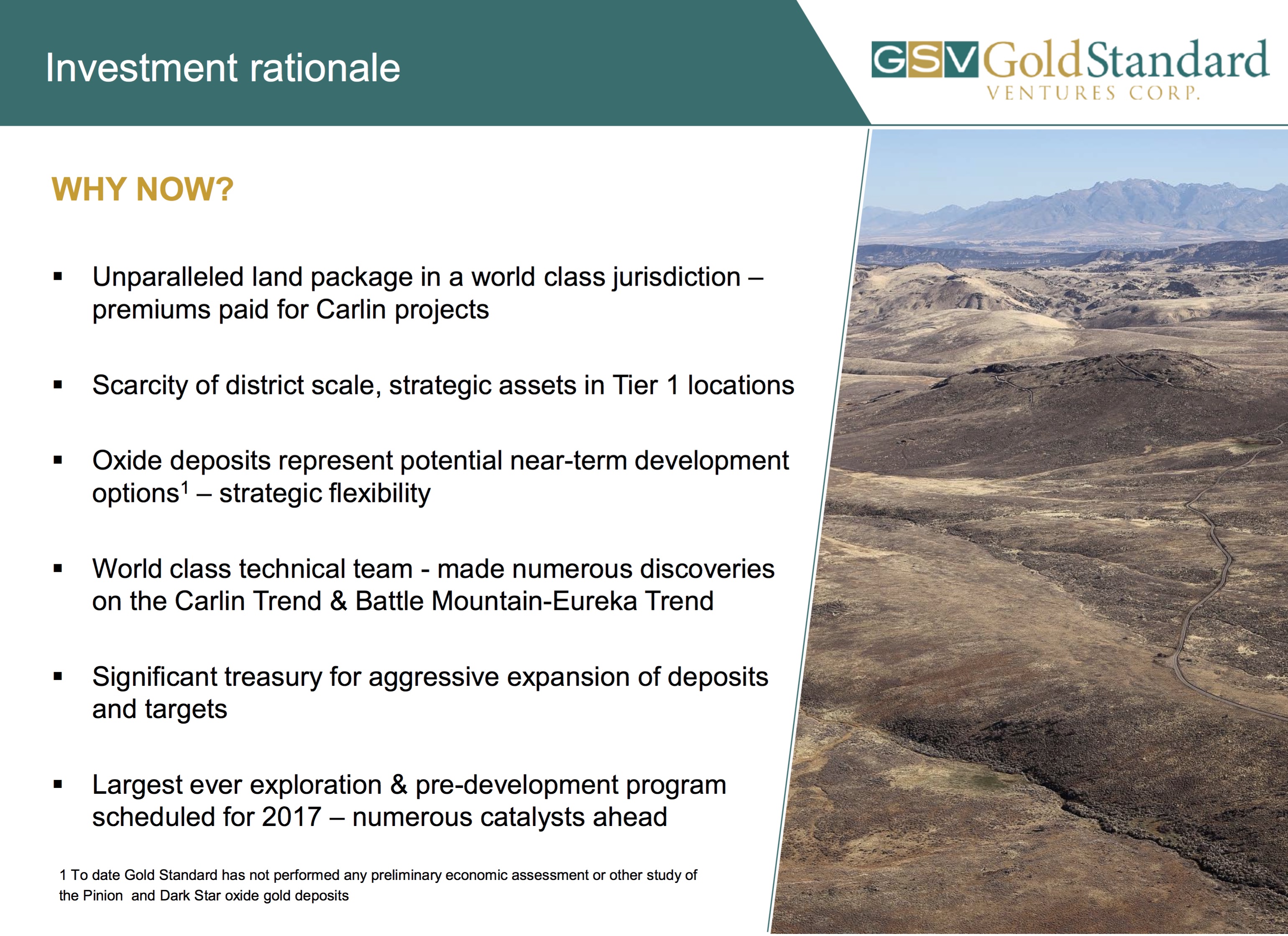 JONATHAN AWADE – CO-FOUNDER, CEO & DIRECTOR OF GOLD STANDARD VENTURES CORP. – Mr. Awde has the spent the last 12 years financing junior resource companies and has focused on institutional accounts.  Mr. Awde has raised over $200m for public and private companies in the resource sector. Mr. Awde is co-founder, President, CEO and a Director of Gold Standard Ventures where he oversees all financing, corporate activities and developments for the company. Mr. Awde received his BA in Economics & Finance from Acadia University and is a former Sales & Trading professional at a CDN Broker Dealer.

BRUCE MCLEOD – DIRECTOR – Mr. McLeod is a mining engineer with over 30 years of experience in all areas of the mining industry. Most recently he was a director of Kaminak Gold Corp, which was acquired this year by Goldcorp Inc. for $520 million. Mr. McLeod is currently President and CEO of Sabina Gold & Silver Corp. Prior to that, he served in a senior capacity with a number of successful junior mining ventures including: President and CEO of Mercator Minerals Ltd.; President, CEO and director of Creston Moly Corp.; and founder of both Sherwood Copper Corp. and Stornoway Diamond Corp. He also served on the board of directors of Palmarejo Silver and Gold Corp. (acquired by Coeur D’Alene Mines for $1.2 billion) and Ariane Gold (acquired by Cambior Inc.), and has been involved in numerous projects at various stages of development while with the Northair Group. Mr. McLeod was the co-recipient of AME BC’s E.A. Scholz award for excellence in mine development in 2009.

JAMIE STRAUSS – DIRECTOR – Mr. Strauss is currently a Director of boutique mining finance firm, Strauss Partners based in London, England. Mr. Strauss has worked as a stockbroker in the City of London for 25 years, specialising in the corporate resource arena, including a term as Managing Director of UK for BMO Capital Markets 2007-2009. He has raised in excess of $1bn in recent years for projects spanning the globe in both the energy and mineral world on behalf of leading institutions in North America, Australia and Europe. He has been a committee member of the Association of Mining Analysts for the last four years, and is a non-executive director of Wildhorse Energy Ltd and Altius Minerals. Mr. Strauss was a director of Extorre Gold Mines Ltd until it was taken over by Yamana.

ROBERT MCLEOD – DIRECTOR & P.GEO – Mr. McLeod has over 17 years of post-graduate experience in mining and mineral exploration, working for a variety of major and junior mining companies. As an exploration geologist and project manager at Miramar’s Hope Bay project, he was part of the team that discovered the Naartok deposit, as well as expanding and delineating the Boston and Doris deposits. As Vice-President Exploration for Underworld Resources, his team acquired, discovered and delineated the Golden Saddle and Arc Deposits at the White Gold Property, Yukon. He holds a Bachelor of Science Degree, majoring in Economic Geology from the University of British Columbia (1993) and in 1998 graduated from Queens University, Masters in Geology, Mineral Exploration Program. Mr. McLeod is currently President, CEO and a Director of IDM Mining Ltd.

WILLIAM E. THRELKELD – DIRECTOR – Mr. Threlkeld is  currently Senior Vice President, Exploration, of Seabridge Gold, where for the past 15 years, he has designed and executed exploration and resource delineation programs which have defined more than 45 million ounces of measured and indicated gold resources. His successes include the discovery and definition of the Mitchell and Iron Cap deposits which have made the KSM project in British Columbia the largest gold reserve in Canada.

Mr. Threlkeld began his career at Noranda Exploration Inc. but achieved his greatest recognition at Placer Dome Inc. From 1991 to 1997, as Exploration Manager and Vice President, he was responsible for all of Placer Dome’s exploration activity and investment in Latin America, directing programs that resulted in the discovery and delineation of Las Cristinas, Venezuela (9.7 million ounces), Cerro Crucitas, Costa Rica (2.3 million ounces) and Mulatos, Mexico (2.0 million ounces).. Mr. Threlkeld obtained his MSc in Economic Geology from the University of Western Ontario.

RICHARD SILAS – CORPORATE SECRETARY & DIRECTOR – Mr. Silas serves as President and is the Owner of Universal Solutions Inc; a management company for TSX listed Companies. Mr. Silas has an administrative background with Junior Resources Companies for over the last 15 years. Mr. Silas served as the Chief Executive Officer and president of Gold Standard Ventures Corp., until August 2009, and is currently serving as its Corporate Secretary. He serves as a Director for several public and private companies in Canada and USA. Mr. Silas has completed the Securities Program (Going Public, Director/Officers and Continuous Disclosure) from Simon Fraser University in 1997.

MICHAEL N. WALDKIRCH – CHIEF FINANCIAL OFFICER – Mr. Waldkirch is a Senior Partner with the Public Accounting firm Michael Waldkirch and Company, Certified General Accountants in Vancouver, BC. He has extensive experience in providing a wide variety of financial and business consultancy services to public and private companies. Mr. Waldkirch serves as the Chief Executive Officer, Chief Financial Officer, Corporate Secretary and Director of Spirit Bear Capital Corp.  Mr. Waldkirch holds a Bachelor of Arts in Economics from the University of British Columbia and has been a Certified General Accountant since 1998. 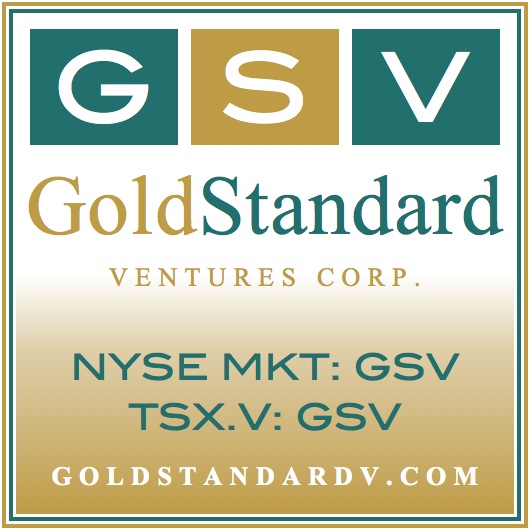