You played as a train in Fallout 3, but you didn't realise it 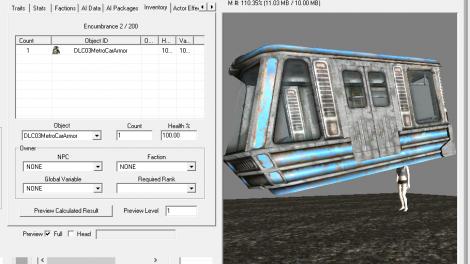 An interesting story recently broke on 4chan, describing how the metro car in Fallout 3’s Broken Steel add-on was actually powered by sticking the car on the head of an NPC and making them run really fast.

However, our pals over at PC Gamer have discovered that’s not entirely true. After a bit of tinkering, they uncovered that it’s not a hat but actually an arm piece.

In fact, the train actually becomes the right hand of the player themselves, not an NPC. When the player gets into the train and turns it on, the game equips you with an item called “DLC03MetroCarArmor” and activates a package that makes it look like you’re riding inside the train.

So, in reality, the train is just an extension of yourself – and you’re powering it. And that, ladies and gentlemen, is how video games are made.