Rick Santelli: CNBC’s Business News On-Air Editor – Rick Santelli stepped away from the floor of the Chicago Board of Trade to give King World News listeners globally an uninterrupted and in-depth interview. Rick joined CNBC Business News as On-Air Editor in June 1999, reporting live from the floor of the Chicago Board of Trade. His focus is primarily on interest rates, foreign exchange, and the Federal Reserve. He began his career in 1979 as a trader and order filler at the Chicago Mercantile Exchange in markets that included gold, lumber, CD's, T-bills, foreign currencies, and livestock. During the time he spent as a financial trader and executive, Santelli worked for Drexel Burnham Lambert as the Vice President of Interest Rate Futures and Options. Rick is also credited with being a catalyst in the early formation of the Tea Party Movement via a statement he made on February 19, 2009. 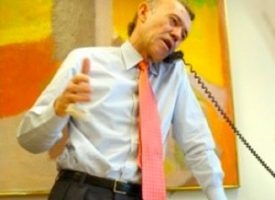