Nomi Prins: Keynote speaker who addressed the Federal Reserve, IMF and the World Bank – Nomi is a renowned journalist, author and speaker. Her latest book, “COLLUSION: How The Central Bankers Rigged The World” In this searing exposé, former Wall Street insider Nomi Prins shows how the 2007-2008 financial crisis turbo-boosted the influence of central bankers and triggered a massive shift in the world order. 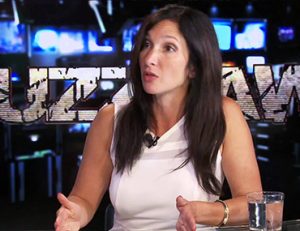 As a managing director at Goldman Sachs, Nomi became discouraged by unethical practices. As a Wall Street insider and outspoken advocate for economic reform, Nomi Prins is a leading authority on how the widespread impact of financial systems continues to effect our daily lives. She has spent decades analyzing and investigating economic and financial events at the ground level and meeting with those that shape the world’s geo-political-economic framework. She continues to break stories by conducting independent research, writing best-selling books, and traversing the globe to share her knowledge and demystify the world of money.

Before becoming a renowned journalist and public speaker, Nomi reached the upper echelons of the financial world where she worked as a managing director at Goldman Sachs, ran the international analytics group as a senior managing director at Bear Stearns in London, was a strategist at Lehman Brothers and an analyst at the Chase Manhattan Bank. During her time on Wall Street, she grew increasingly aware of and discouraged by the unethical practices that permeated the banking industry. Eventually, she decided enough was enough and became an investigative journalist to shed light on the ways that financial systems are manipulated to serve the interests of an elite few at the expense of everyone else.

Nomi makes regular television appearances on BBC, CNN, CNBC, MSNBC, CSPAN, Democracy Now, Fox and PBS. She has been a guest on hundreds of radio shows including for Marketplace, NPR, BBC, and Canadian Programming. She has also appeared in several award-winning documentaries alongside other prominent thought-leaders. Her writing has been featured in The New York Times, Forbes, Fortune, Newsday, The Guardian, The Nation, New York Daily News, La Vanguardia, and Salon.com, among other publications. Nomi has appeared on hundreds of television and radio shows including CNN, MSNBC & Fox 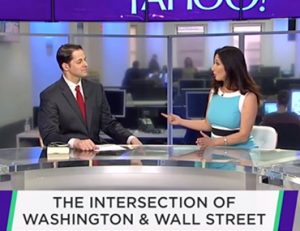 She established international distinction for her presentation at the annual gathering of senior level governors and officials hosted by the Federal Reserve, International Monetary Fund (IMF) and World Bank conference in Washington D.C. Represented by the American Program Bureau, Nomi has delivered keynote speeches at many prominent global venues including the London School of Economics, the UK Parliament, the Mexican Senate, the Tokyo Stock Exchange, Google, Columbia University and the National Consumer Law Center.

Prins’ insights and unparalleled observations have made her sought by politicians from all parties for advice and analysis of the financial system and the economy. Nomi served as a member of Senator (and presidential contender) Bernie Sanders’ Federal Reserve Reform Advisory Council. She is listed as one of America’s TopWonks. She is also on the advisory board of the whistle-blowing group ExposeFacts, a board member of animal welfare and wildlife conservation group The Elephant Project, and a member of the global advisory board of Ethical Markets.

Nomi received her BS in Math from SUNY Purchase, and MS in Statistics from New York University, where she completed coursework for a PhD in Statistics. As a lifelong learner, she encourages others to do their own research, continue to ask big questions and think for themselves. 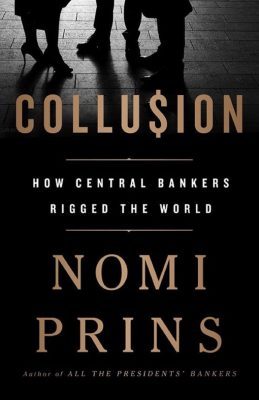 COLLUSION: How The Central Bankers Rigged The World –  In this searing exposé, former Wall Street insider Nomi Prins shows how the 2007-2008 financial crisis turbo-boosted the influence of central bankers and triggered a massive shift in the world order.

Central banks and international institutions like the IMF have overstepped their traditional mandates by directing the flow of epic sums of fabricated money without any checks or balances. Meanwhile, the open door between private and central banking has ensured endless opportunities for market manipulation and asset bubbles — with government support.

Through on-the-ground reporting, Prins reveals how five regions and their central banks reshaped economics and geopolitics. She discloses how Mexico navigated its relationship with the US while striving for independence and how Brazil led the BRICS countries to challenge the US dollar’s hegemony. She explains how China’s retaliation against the Fed’s supremacy is aiding its ongoing ascent as a global superpower and how Japan is negotiating the power shift from the West to the East. And she illustrates how the European response to the financial crisis fueled instability that manifests itself in everything from rising populism to the shocking Brexit vote.

Packed with tantalizing details about the elite players orchestrating the world economy — from Janet Yellen and Mario Draghi to Ben Bernanke and Christine Lagarde — Collusion takes the reader inside the most discreet conversations at exclusive retreats like Jackson Hole and Davos. A work of meticulous reporting and bracing analysis, Collusion will change the way we understand the new world of international finance. 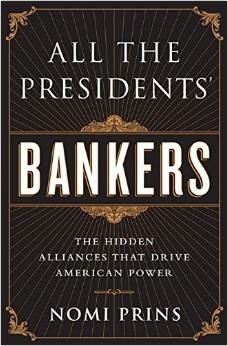