LEGEND DOUG CASEY DISCUSSES COMING FINANCIAL AND ECONOMIC CHAOS AND PANIC INTO GOLD
Doug Casey Is Investing In One Of The Fastest Growing Royalty Companies In The World! Play the remarkable audio interview above to learn more! SYMBOL MTA IN CANADA & MTAFF IN THE U.S.!

METALLA ROYALTY & STREAMING LTD. (TSX.V: MTA – OTCQX: MTAFF) – Metalla was built to generate LEVERAGED PRECIOUS METALS EXPOSURE by acquiring royalties and streams for our shareholders. Our goal is to increase share value by accumulating a diversified portfolio of royalties and streams with attractive returns. Our strong foundation of current and future cash generating asset base, combined with an experienced team gives Metalla a clear path to becoming one of the leading gold and silver companies for the next commodities cycle.

CONTACT THE COMPANY DIRECTLY to get more information by calling (604) 696-0741 or email [email protected]. 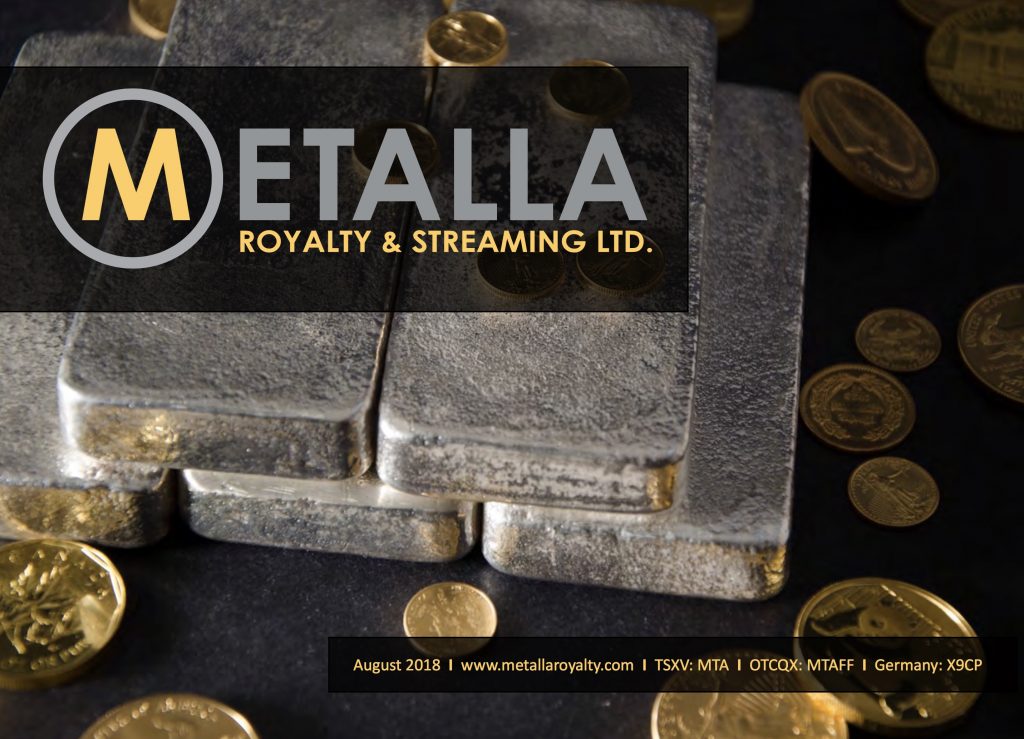 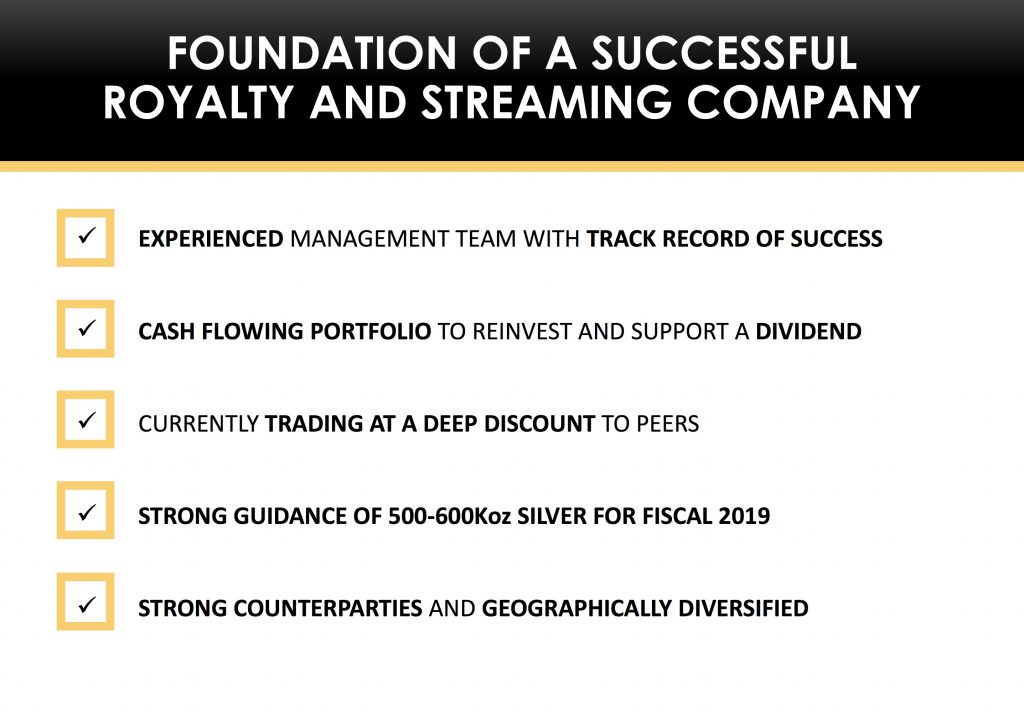 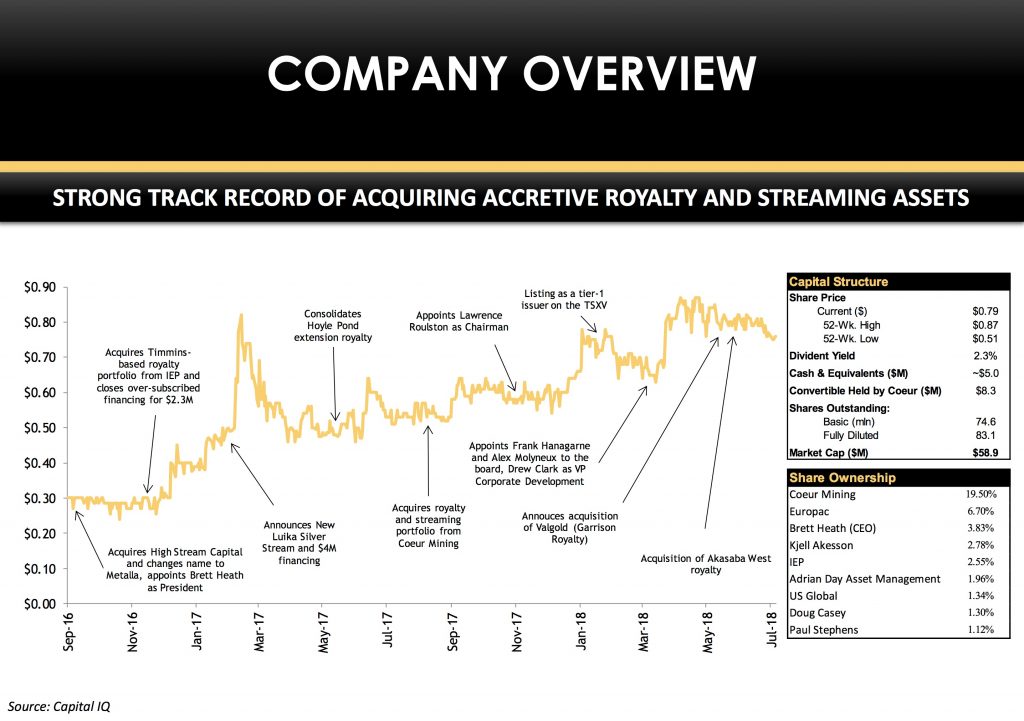 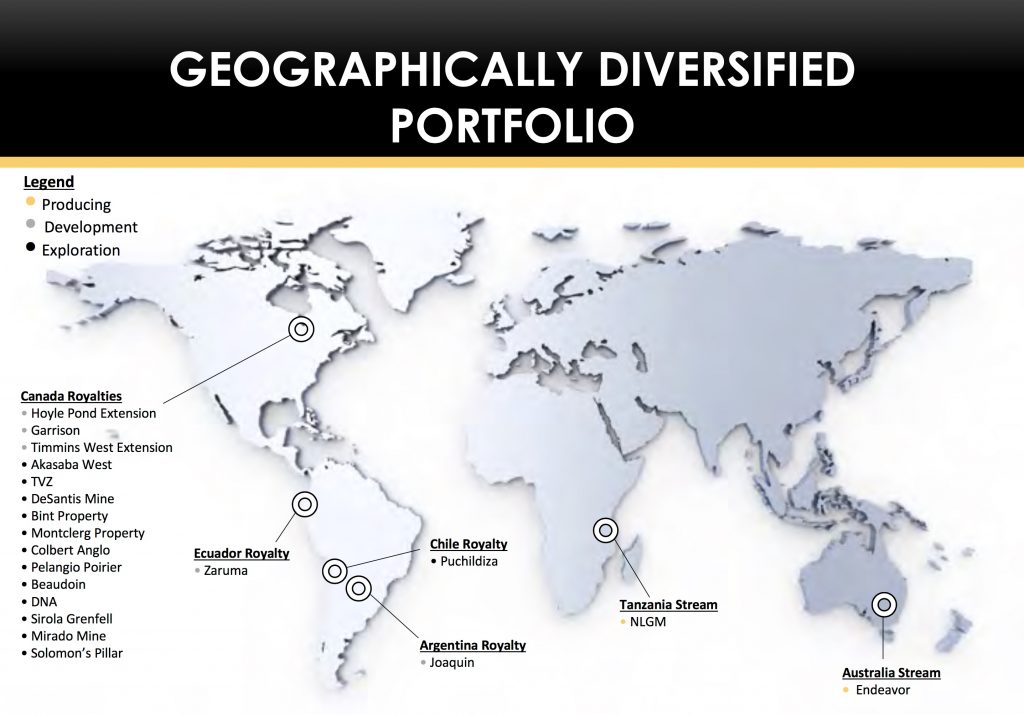 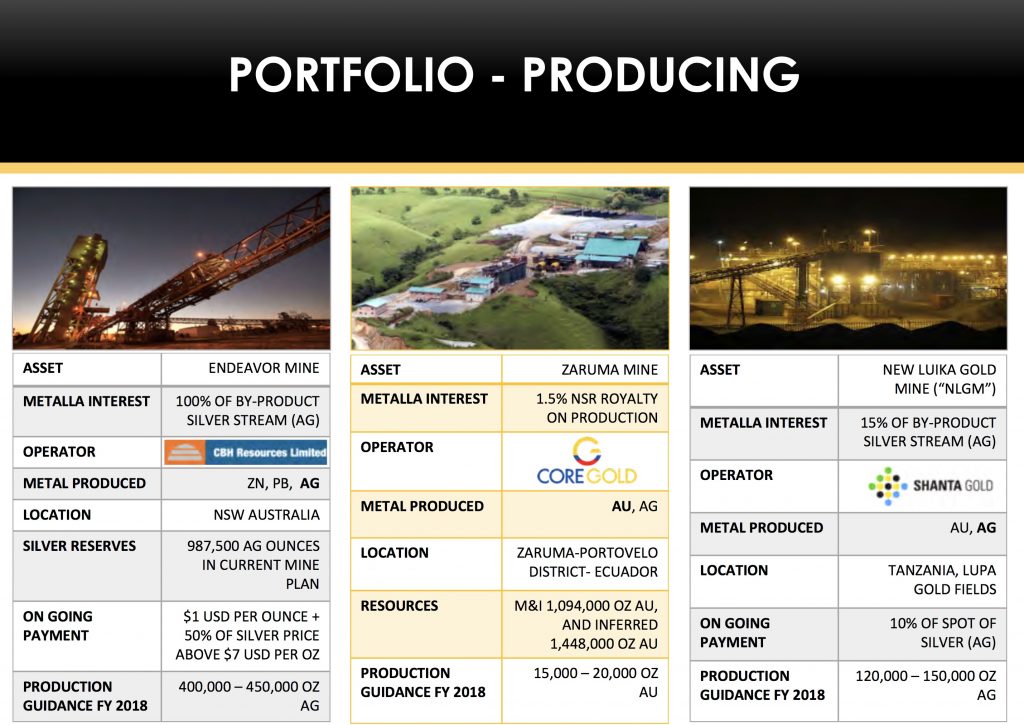 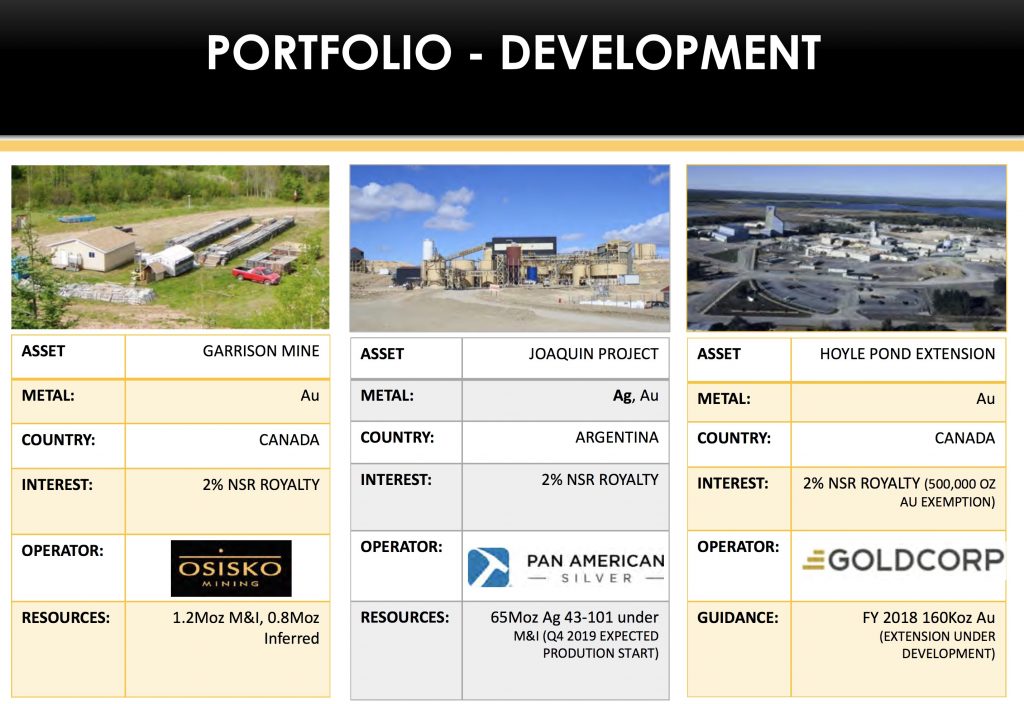 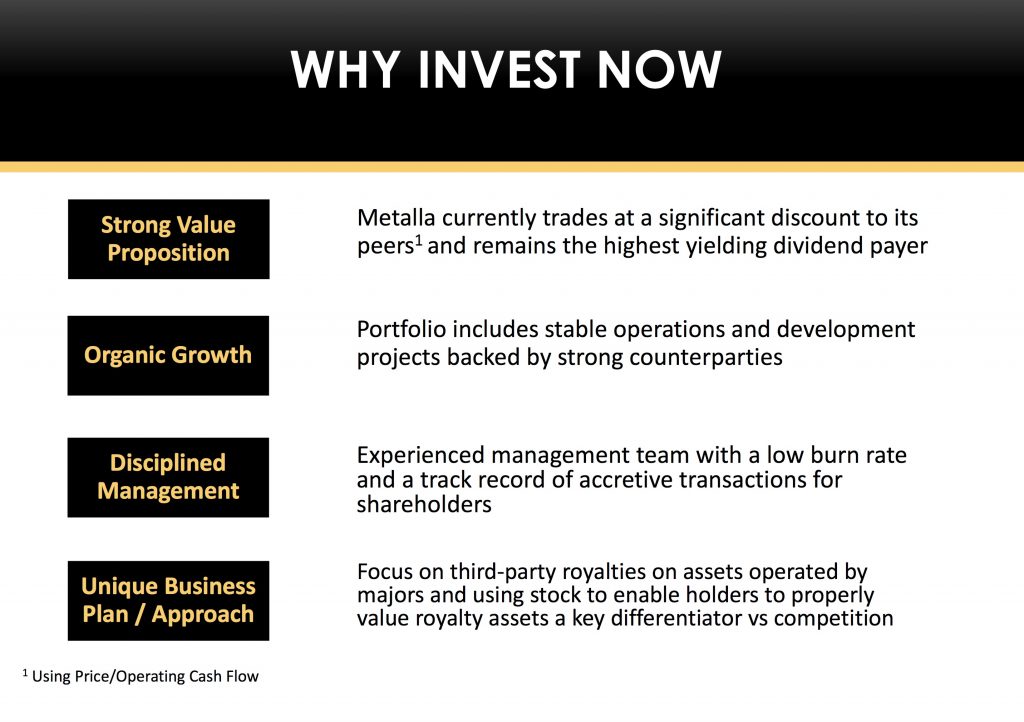 BRETT HEATH – PRESIDENT, CEO & DIRECTOR – Mr. Heath has a comprehensive career in the structured finance, corporate finance, and investment management industry. He was previously the Chairman and CEO of High Stream Corporation before Metalla acquired it in August 2016. High Stream was a specialty streaming and royalty consulting company where he worked with First Mining Finance, (FF:CVE)  and several other private equity funds, advising and brokering metal streaming transactions. Before that, he was the President of a private streaming company where he deployed $11 million in 4 producing streaming transactions in 3 separate jurisdictions. Prior to that, he was a founding principal of KSIR Capital Management a hedge fund focused on small and micro-cap mining companies. He also advised several mining companies with KSIR Capital, the corporate finance division of KSIR.

DREW CLARK – VP CORPORATE DEVELOPMENT – Mr. Clark has over a decade of experience within the mining sector as a research analyst, investment banker and corporate development professional. He joined Metalla from a boutique investment bank where he was VP Corporate Finance where he covered royalty and streaming companies.  Mr. Clark’s corporate development career includes Carlisle Goldfields and Premier Royalty Corp. As an integral part of the team at Premier Royalty, he was responsible for the identification and evaluation of hundreds of royalty and streaming opportunities.  Mr. Clark started in the industry as a junior mining research associate at CIBC World Markets and went on to become a publishing mining analyst at two boutique investment dealers in Toronto. Drew obtained his Bachelor’s in Commerce Degree from McGill University and is a CFA Charterholder.

FRANK HANAGARNE JR. – NON-EXECUTIVE DIRECTOR – After 17 years of service at Newmont Mining, Mr. Hanagarne joined Coeur Mining, Inc. in 2011. He has held the post of Sr. Vice President and Chief Operating Officer of Coeur Mining since 2013. Mr. Hanagarne served as Sr. Vice President and Chief Financial Officer of Coeur Mining, Inc. from 2011 to 2013. While at Newmont, Mr. Hanagarne managed the royalty portfolio acquired by Newmont (Newmont Capital) from Franco Nevada which included a global distribution of over 200 royalty assets. He led an extensive portion of the effort undertaken to vend the royalty portfolio in 2007 for CAD$ 1.3B through the IPO of Franco Nevada. Mr. Hanagarne also served in responsible positions including Operations, Director of Corporate Development, and as Chief Operating Officer of Valcambi, SA, a precious metal refiner in Switzerland, in which Newmont Mining Corporation has an equity interest. Mr. Hanagarne has a Master’s degree in Business Administration from the University of Nevada, Reno, and a Bachelor of Science Degree in Metallurgical Engineering from the New Mexico Institute of Mining and Technology.