Danielle DiMartino Booth: CEO & Chief Strategist for Quill Intelligence LLC: Quill is a research and analytics firm. Prior to Quill, DiMartino Booth spent nine years at the Federal Reserve Bank of Dallas where she served as Advisor to President Richard W. Fisher throughout the financial crisis until his retirement in March 2015. Her work at the Fed focused on financial stability and the efficacy of unconventional monetary policy. *** To subscribe to Quill Intelligence CLICK HERE. 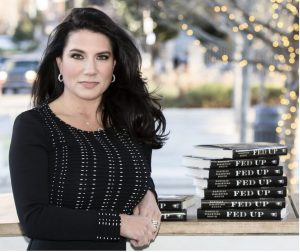 Danielle DiMartino Booth is also the author of FED UP: An Insider’s Take on Why the Federal Reserve is Bad for America (Portfolio, Feb 2017), a full-time columnist for Bloomberg View, a business speaker, and a commentator frequently featured on CNBC, Bloomberg, Fox News, Fox Business News, BNN Bloomberg, Yahoo Finance and other major media outlets.

After correctly predicting the housing crash of 2008 and quitting her high-ranking Wall Street job, Danielle DiMartino Booth was surprised to find herself recruited as an analyst at the Federal Reserve Bank of Dallas, one of the regional centers of our complicated and widely misunderstood Federal Reserve System. DiMartino Booth found a cabal of unelected academics who made decisions without the slightest understanding of the real world, just a slavish devotion to their theoretical models. 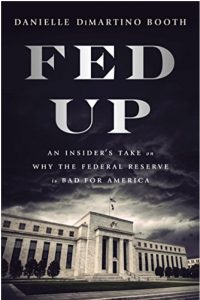 Now DiMartino Booth explains what really happened to our economy after the fateful date of December 8, 2008, when the Federal Open Market Committee approved a grand and unprecedented experiment: lowering interest rates to zero and flooding America with easy money.

Read here the opening of this inside view of the Federal Reserve’s inner workings:

“Until September 2008, when all hell broke loose in a worldwide panic that completely blindsided and, embarrassed the Federal Reserve. The Fed had used billions of dollars in taxpayer funds to bail out Wall Street fat cats. Everyone blamed the Fed.

Just before 9 a.m., the door to the chairman’s office opened. Federal Re- serve Chairman Ben Bernanke took his place in an armchair at the center of a massive oval table. The members of the FOMC found their designated places around the table; aides sat in chairs or couches against the wall. With staff, the room contained fifty or sixty people, far more than normal for this momentous occasion.

In front of each FOMC member was a microphone to record their words for posterity. To a casual observer, the content of their conversation would be obscured by economic jargon.

This day, their essential task was to vote on whether to take the “fed funds” rate—the interest rate at which banks lent money to each other in the overnight market—to the zero bound. The history-making low rate would ripple throughout the economy, affecting the price to borrow for businesses and consumers alike.

Bernanke was calm but insistent. His lifetime of study of the Great Depression indicated this was the only way. His sheer depth of knowledge about the Fed’s mishandling of that tragic period was undoubtedly intimidating.

By the end of the meeting, the vote was unanimous. The FOMC officially adopted a zero-interest-rate policy in the hopes that companies teetering on the brink of insolvency would keep the lights on, keep employees on their payrolls, and keep consumers spending. It would even pay banks interest on deposits.

Free cash. We’ll even pay you to take it!

As they gathered their belongings, everyone shook hands, all very collegial despite the sometimes vigorous discussion. They journeyed back to their nice homes in the toniest neighborhoods of America’s richest cities: New York, Boston, Philadelphia, Chicago, Dallas, San Francisco, Washington, DC.

They returned to their lofty perches, some at the Eccles Building, others to the executive floors of Federal Reserve District Bank buildings, safely cushioned from the decision they had just made. Most of them were wealthy or had hefty defined benefit pensions. Their investments were socked away in blind trusts. They would feel no pain in their ivory towers.

It took a few months, but the Fed’s mouth-to-mouth resuscitation brought gasping investment banks and hedge funds and giant corporations back to life. Wall Street rejoiced.

But the Fed’s academic models never addressed one basic question: What happens to everyone else?

In the decade following that fateful day, everyday Americans began to suffer the aftereffects of the Fed’s decision. By 2016, the interest rate still sat at the zero bound and the Fed’s balance sheet had ballooned to $4.5 trillion, thanks to the Fed’s “quantitative easing” (QE), the label given its continuing purchases of Treasuries and mortgage-backed securities.

To what end? All around are signs of an economy frozen in motion thanks to the Fed’s bizarre manipulations of monetary policy, all intended to keep the economy afloat.

The direct damage inflicted on our citizenry begins with our youngest minds and scales up to every living generation in our country’s midst.”