September 30 (King World News) – Peter Boockvar:  The more I read about what brought about the spike in UK gilt yields that led to the BOE intervention, the more it reminds me of 2007-2008. Not in the sense of impending doom in the housing and banking system but the reminder of how then we all learned something new about many of the exotic products that were created so institutions can get extra yield in a regime of artificially suppressed interest rates.

Liability Driven Investment (LDI) is what UK pension funds took part in. Simplistically speaking, they essentially bought leveraged positions in gilts in order to reach future return requirements. As gilts sold off, they got margin calls in need of more collateral.

So, as seen 15 yrs ago, when the cost of capital rises sharply, over leveraged entities get exposed. They won’t be the last ones.

Here were some key quotes from both the Nike and Carmax conference calls yesterday:

Nike, “Earlier ordering by retailers, driven by strong consumer demand and less predictable delivery timelines, had led to elevated inventory levels broadly across consumer goods. Then transit times began to rapidly improve with signals that further improvement may be coming. At the same time, consumers are facing greater economic uncertainty, and promotional activity across the marketplace is accelerating, especially in apparel. As a result, we faced a new degree of complexity.”

“In September, month to date retail sales are up double digits versus the prior year, following a strong back-to-school season. However, our North America inventory grew 65% versus the prior year, with in-transit inventory growing approximately 85%. This reflects the combination of late delivery for the past two seasons plus early holiday orders that are now set to arrive earlier than planned and a prior year that was impacted by factory closures in Vietnam and Indonesia. As a result, we are taking decisive action to clear excess inventory…We expect that total inventory in North America peaked in Q1…We expect 2nd quarter gross margins to decline approximately 350-400 bps vs the prior year, the largest impact across the fiscal yr as we discount out-of-season product more aggressively in a largely promotional marketplace. This will require higher markdowns in our own channels and through wholesale partners.”

With respect to FX, the strong dollar clipped revenue growth by a large 600 bps. So instead of 10% growth, they reported 4%. Now we know many companies will be reported similar hits but we can’t just put this aside as this is real money we’re talking and a lot of it that is not realized when translated back to US dollars. “Based on current spot rates, net of hedging activity, we estimate the full year negative impact of FX on reported revenue and EBIT to now be approximately $4b and $900mm, respectively, creating a wide divergence in constant versus real dollar performance.”

On the labor force side, something of note, “We now expect SG&A to increase high single digits as we prioritize investment in new transformational capabilities to serve consumers directly and at scale, partially offset by tighter expense control and limited headcount growth across the business.”

Carmax, “Macro factors, including vehicle affordability that stem from persistent and broad inflation, climbing interest rates and low consumer confidence, all led to a market wide decline in used auto sales. In addition, wholesale values were affected by steep depreciation in the quarter…We believe industry sales were also impacted by a shift in consumer spending prioritization from large purchases to smaller discretionary items. In response to the current environment and consumer demand, we have continued to offer a higher mix of lower priced vehicles.”

How did the quarter progress? “We began the 2nd quarter with a low single digit decline in comp sales during June that reflected a continuation of softer although improving sales…Comps then fell sharply at the beginning of July with August ending in mid-teen declines…Moving into September, we’re seeing the same softness that we saw in August.”

On credit quality, “Last year, our loan loss provision of $35mm was a significant tailwind as the overall performance of the consumer remained remarkably strong. This quarter’s $76mm provision results in an ending reserve balance of $478mm of 2.92% of managed receivables, up from 2.85% last quarter.”

On trimming SG&A “to further align our expenses to our sales levels”, “We expect these savings will materialize more fully in the coming quarters. This included further reducing staffing through attrition in our stores and Customer Experience Centers, pausing on a portion of the hiring and contractor utilization in our corporate offices, as well as better aligning marketing spend to sales.”

Liz Truss and her Chancellor of the Exchequer are sticking to their plan after a meeting with the Office for Budget Responsibility. While I seem to be one of only a few that like what’s she’s doing and we’re talking a small percentage of GDP in terms of the tax cuts, the markets still don’t and the pound, after 4 days of gains, reversed this morning’s 5th day of gains. Gilt yields are still down sharply across their curve.

China
China’s September state sector weighted PMI fell to 50.9 from 51.7 but the components were mixed. Services fell while manufacturing got back above 50. We know the service sector will continue to be under pressure from the stop and start covid approach. Real estate is of course the other major stress point.

The private sector Caixin manufacturing PMI weakened further to 48.1 from 49.5 in contrast to the above. Caixin said “A key factor driving the headline index lower was a faster fall in new orders during September. New business fell for the 2nd month in a row, and at the quickest rate since April, with panel members often commenting that restrictions around travel and operations had dampened customer demand. Foreign sales also fell again, and at a solid rate that was the fastest for four months.” Also, “Concerns over potential repeated outbreaks of Covid and the prolonged use of containment measures weighed on optimism towards future output. Notably, the level of positive sentiment slipped to its lowest since November 2019.”

After yesterday’s bounce in the yuan on the intervention speculation, the yuan is up for a 2nd day. Chinese stocks were mixed and we know that until the covid policy changes, their economy will be challenged at the same time the pain in their real estate market continues on but hopefully to an eventual less leveraged place.

Japan
The Japanese labor market tightened further in August with their jobs to applicant ratio rising to 1.32 from 1.29 and that was better than the estimate of 1.30. That’s the highest since March 2020 when it was 1.39 before the sharp covid driven decline. Their unemployment rate fell one tenth as expected to just 2.5%. Japan also reported upside to retail sales and IP in August. Yields fell a touch along with the drop in yields elsewhere. The yen is down slightly and really hasn’t benefited at all from the intervention.

Europe
In Europe, September inflation rose to 10% on the dot, up from 9.1% in August and that was 3 tenths more than expected. 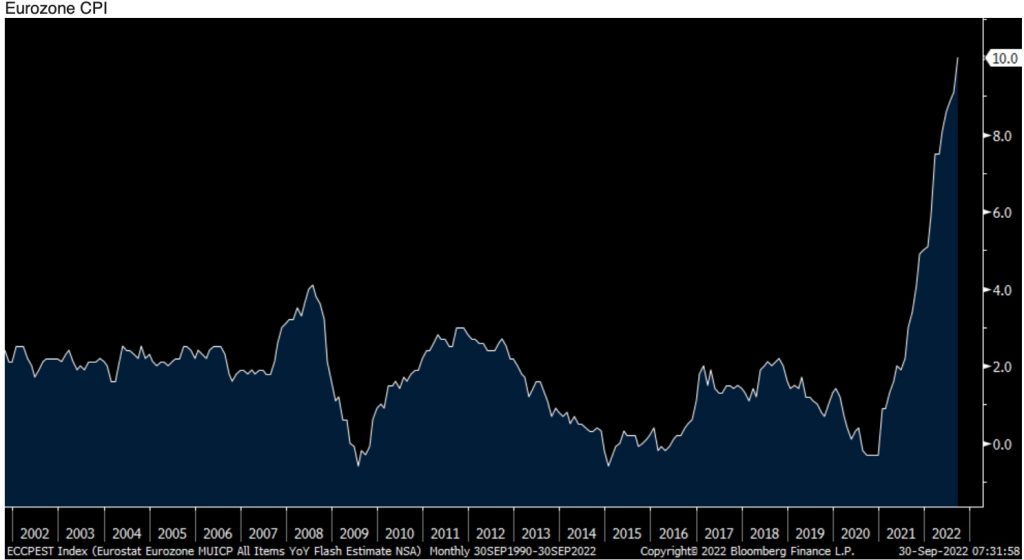 The core rate accelerated to a 4.8% increase from 4.3% last month and that was one tenth more than forecasted. Expect another 75 bps interest rate increase at the next meeting of the ECB. Mario Draghi really left them with a pile of… with his negative rate policy. The 5 yr 5 yr inflation forward though is little changed in response to the inflation upside. Also, German breakevens fell too for a 6th straight day. 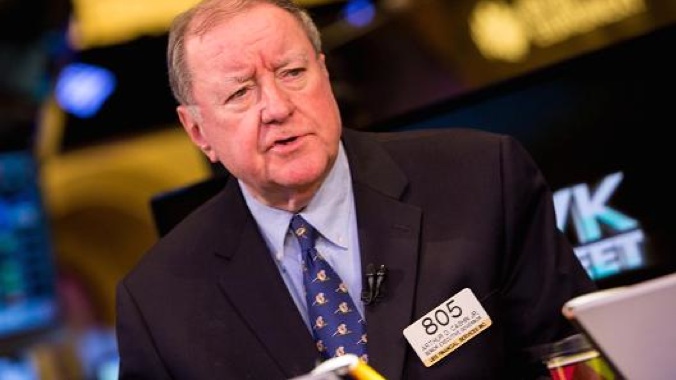 Critical S&P Level
Art Cashin, Head of Floor Operations at UBS:  Stock bulls circle the wagons, hoping to avoid losses on final day of the quarter. Rebalancing by the close is still uncertain. The bulls hope to defend S&P 3636, well at the least 3600 level.

The insightful Peter Boockvar points out that it was leverage instruments trading, that bought about the near crisis in London earlier in the week. Therefore, we will assume at 11:30, when Europe closes could be important, will be a side of proof response.

The game remains on the table, the rebalancing could be a key factor, but the defending on 3600 in the S&P will matter.

We’ll skip the number since we are having equipment numbers.

Stay safe and have a good weekend.

Worried About The Recent Action In Gold & Silver, Take A Look At This…