The Ultimate Gold Buy Signal As US Savings Continue To Collapse

Here is a look at the ultimate gold buy signal as US savings continue to collapse.

The Ultimate Gold Buy Signal
October 3 (King World News) – Otavio Costa:  A reminder of what was on the front page of the Wall Street Journal just two weeks ago. 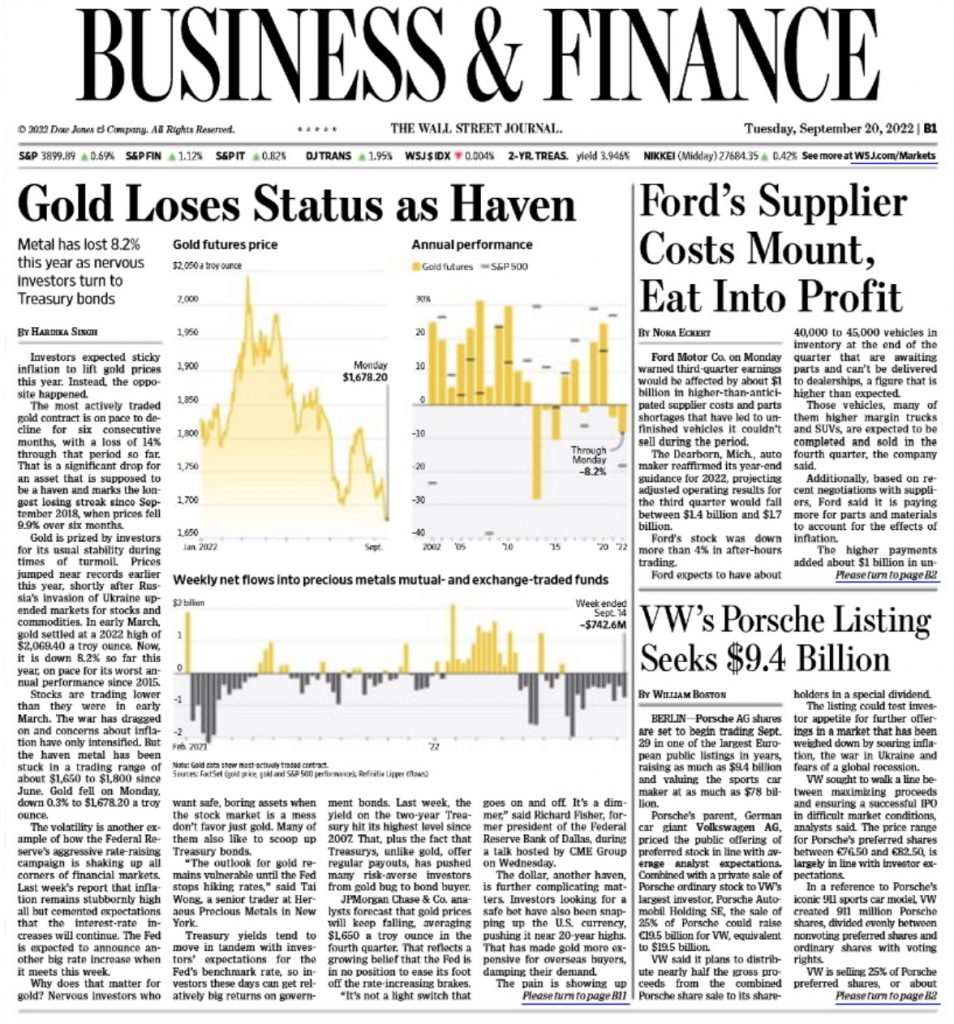 US Savings Collapse
The Daily Shot:  The COVID-era US excess savings drawdown has accelerated. 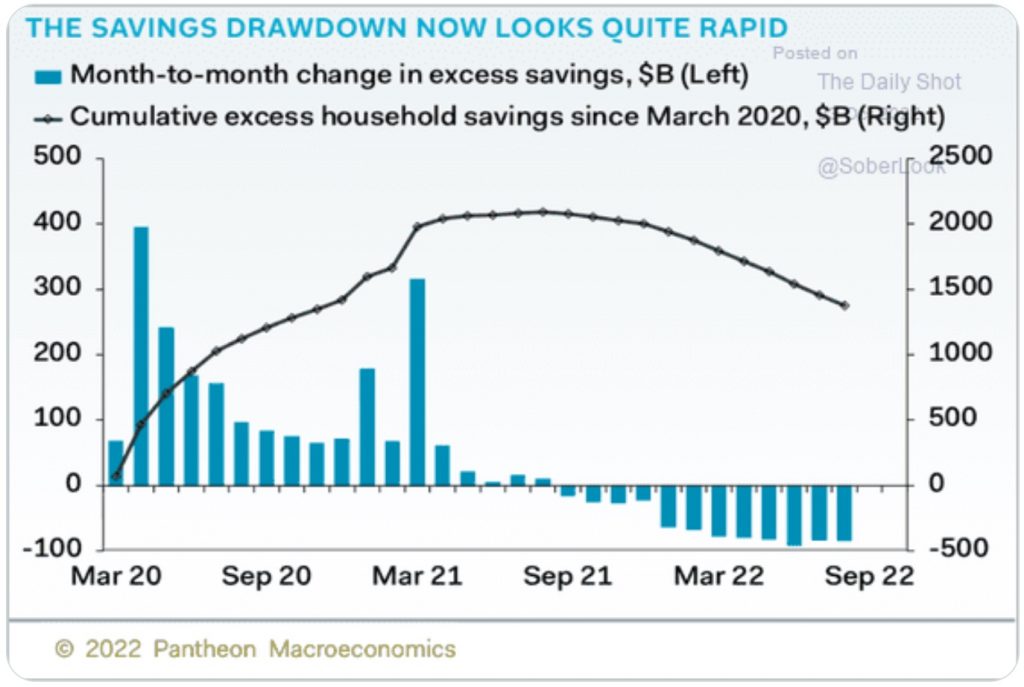 Echoes Of 2008
Peter Boockvar:  The echoes of 2008 continue with a weekend filled with worries about a bank failure and banks that can’t offload LBO bank loans.

The importance of what Lael Brainard thinks is big as she’s not just Vice Chair but part of the Fed troika which also includes Powell and the NY president Williams. Reading again what she said on Friday tells me that she does not want another 75 bps rate hike in November.

“It will take time for the full effect of tighter financial conditions to work through different sectors and to bring inflation down…We also recognize that risks may become more two sided at some point. Uncertainty is currently high, and there are a range of estimates around the appropriate destination of the target range for the cycle. Proceeding deliberately and in a data dependent manner will enable us to learn how economic activity and inflation are adjusting to the cumulative tightening and to update our assessments of the level of the policy rate that will need to be maintained for some time to bring inflation back to 2%.”

After rising by 9 bps on Friday, the 2 yr yield is down 9 bps today. John Williams, another member of the troika as stated, speaks this afternoon and again tomorrow. If he gives similar commentary, I believe 50 bps it will be next month…

So the freak out over UK PM Liz Truss’ budget and tax cuts is calming as they decided to not go forward with the cut in the top rate to 40% from 45%. I say ‘freak out’ because it was complete nonsense and I couldn’t believe the level of criticism as it made no rational sense whatsoever. The UK economy is more than 3 Trillion pounds in size. The tax package was all of 40b pounds annually, just above 1% of GDP. The Biden student loan relief at $400b is about 1.6% of GDP for perspective. The $1.9 Trillion spent in March 2021 was about 7% of GDP. The pound is up for a 5th straight day and gilt yields are lower. UK assets are dirt cheap for one that has a multi yr time horizon.

As we are a week away from big bank earnings, a key thing to watch is what they plan on doing with bank deposit rates. Banks are losing deposits as people move money to much higher paying money markets. So, bank reserves at the Fed are falling rapidly and in turn, the money market funds are continuing to park money they are receiving at the Fed’s reverse repo facility which as of Friday hit a new daily high of $2.426 Trillion at a yield of 3.05%. 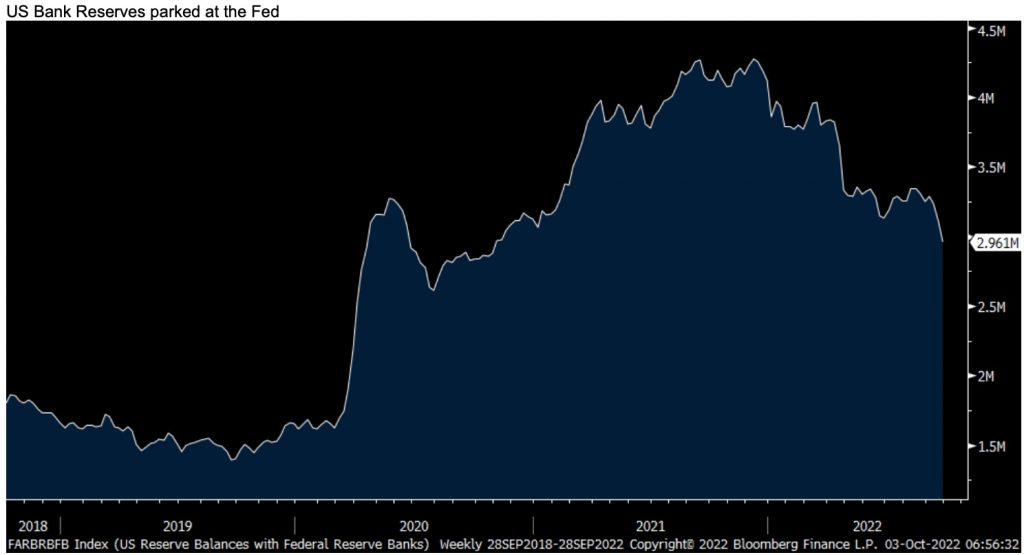 As US bank reserves fall, it quickens the pace at which the Fed will end QT so as not to repeat the repo rate spike in 2019 that led to ‘not QE’ in Q4 then. Bank reserves parked at the Fed is down to $2.96 Trillion. That is 11% of GDP. The trigger in 2019 for the Fed to ramp up asset purchases was about 6.5% of GDP. To get to a similar percentage of GDP means that bank reserves have about $1.3T more to drop.

There are also real world economic implications here because bank reserves are fuel for bank lending. Money parked at the Fed’s repo facility is just motionless money as it’s not recycled into the economy. 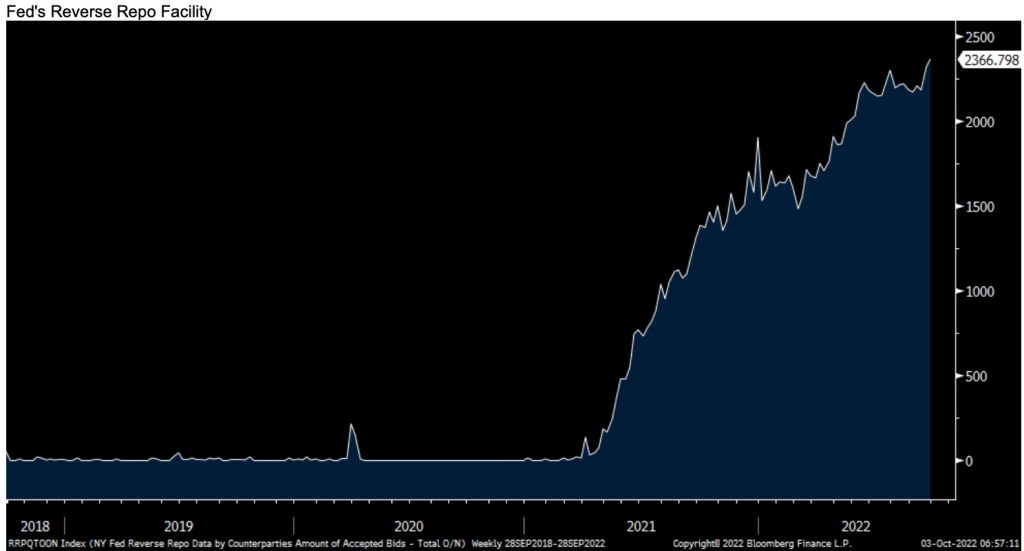 Lastly, we saw market sentiment was pretty sour last week in the II, AAII and CNN data. Over the weekend in Barron’s I saw that the Citi Panic/Euphoria index is in ‘Panic’ level for the 2nd week. From strictly a contrarian set up, the current mood is the basis for a bounce. Anything below -.17 is considered ‘Panic.’

BoE Emergency Intervention, European Crisis, US Dollar, Gold & More
To listen to Nomi Prins discuss the emergency Bank of England intervention in the UK, crisis in Europe and what to expect next for the US dollar, gold and much more CLICK HERE OR ON THE IMAGE BELOW.

Greyerz – Investors Have Two Choices Ahead Of The Coming Global Collapse