Might As Well Do It Sooner
January 26 (King World News) – Luke Gromen:  Let inflation run 10%+ for 4 years, implement yield curve control + big deficits reshoring domestic industry, let the dollar tank, so we can get our economy going again. It’s what they’re gonna have to do in the end, might as well do it sooner so we can all get on w/our lives.

This Will Drive The Gold Bull Market Higher
Fred Hickey:  Another 5 tons inflows into the GLD ETF today. That’s 37 tons in the last 5 business days. Evidence of U.S. institutional gold buying – which has been missing since 2020. This is the type of buying that drives gold bull markets…

Michael Oliver, founder of MSA Research:  MSA is bullish here because silver (and gold) are on the verge of a breakout that looks poised to end the consolidation. Just matching the prior momentum high from 2020 would now mean roughly $45 silver and it could happen in a few months post-breakout. 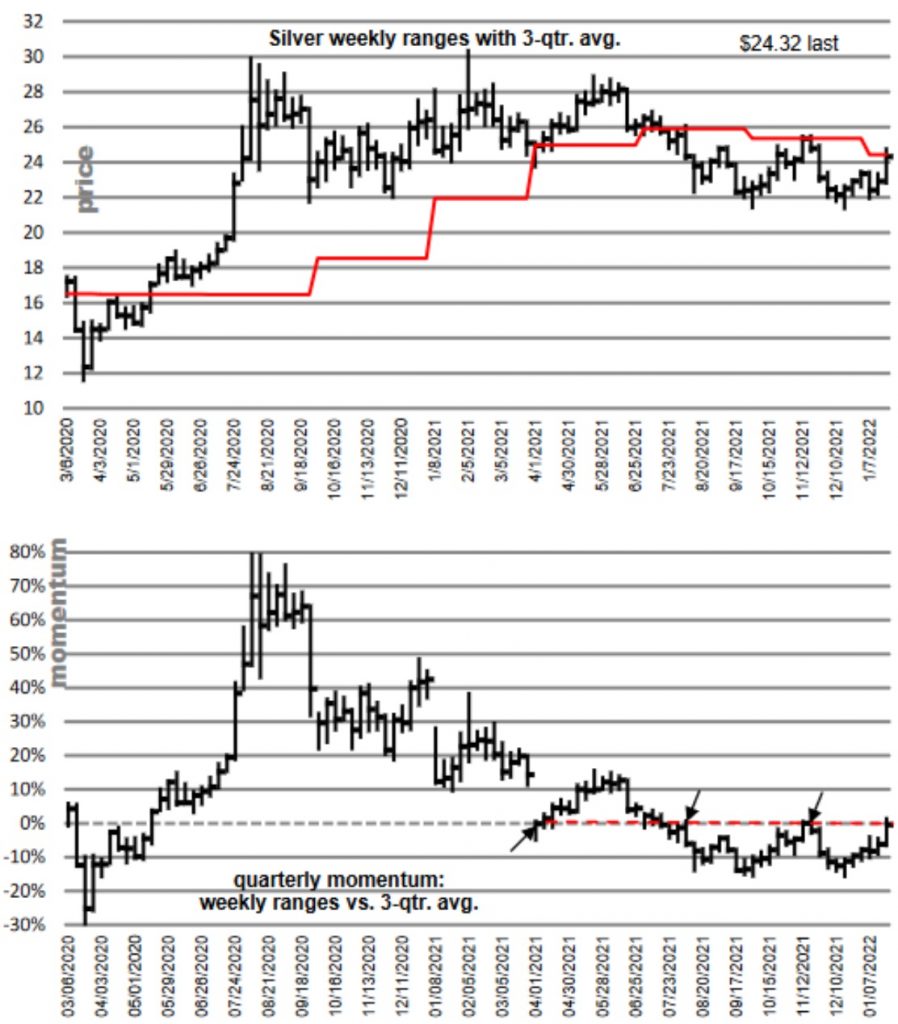 Fed’s $9 Trillion Balance Sheet
Peter Boockvar:  As boldness and monetary policy symmetry (hiking as quickly as they cut) are just not in the DNA of the members of the Federal Reserve, they have decided not to surprise the markets, repeating that QE will end in March (thus they are still buying assets by another $30b in February which “will continue to foster smooth market functioning and accommodative financial conditions” according to today’s statement which now reads so out of place with the current economic environment) and “the Committee expects it will soon be appropriate to raise the target range for the federal funds rate.”

But, they did also lay out a VAGUE game plan for reducing the size of their nearly $9 Trillion balance sheet. They said that it “will commence after the process of increasing the target range for the federal funds rate has begun.” What needs to be clarified by Powell though is HOW SOON AFTER the rate hiking cycle has begun? One hike after? Two hikes? Three? And at what pace this will take place? And will they reduce the balance sheet side ALONG WITH rate hikes, similar to what took place in 2018 or will the rate hikes stop when QT commences?

In response to a Fed that is beginning the process of taking away the punch bowl, but still at a pace that remains uncertain, the 10 yr yield is rising to 1.80% from 1.78% just prior. Is it rising because QT is coming soon and the curve steepens? Or because this overall tightening pace will still go slow and the long end will tighten for them? I’m not sure yet. The 2 yr yield is unchanged. The dollar index is pretty much where it was before the statement was released.

Bottom Line
Bottom line, after QE, and the March rate hike, the pace at which what happens thereafter is right now play it by ear in terms of how the subsequent rate hikes will be spaced out and when QT will begin and at what pace as I mentioned. Yes, much will depend on inflation and growth but so will the behavior of stocks and bonds. The policy mistake has already been made by keeping policy so easy for way too long and now we’ll have to deal with their catch up.

Also of importance, Eric, is that our South Bullfrog project’s strategic land position recently expanded in the Beatty District that is ripe for consolidation following AngloGold’s acquisition of Corvus Gold, which Bullfrog borders. AngloGold is constructing a production hub and spoke plant to process gold from 6 deposits, and will be in production in 3 years and looking to add ounces, which has us very excited about the prospects for our Bullfrog project.

Eric, there is also a significant pipeline of additional copper and gold exploration projects in pro-mining Nevada and Arizona that provides enormous blue sky for investors. Zacapa Resources, symbol ZACA in Canada. To learn more about this exciting company’s first new copper porphyry discovery in Arizona in decades CLICK HERE.