The man who has become legendary for his predictions on QE and historic moves in currencies and metals warned King World News that the world is about to experience another major dose of economic, financial and social upheaval.

November 28 (King World News) – Egon von Greyerz, founder of Matterhorn Asset Management (based in Switzerland):  Money used to be a stable medium of exchange and a store of value but that was in the days when there were sound monetary principles, mostly backed by gold or silver.

Since 1913 and especially 1971 there is no discipline and no morals when it comes to the issuing of money as unlimited amounts of fake fiat money is printed at will.

In today’s fiat money world, there is only one answer to Rand’s question “What is the root of all money?”, namely:

“Evil is the root of all fiat money.” — Egon von Greyerz

On the IMF (International Monetary Fund) website there is an article stating that “Money is something that holds its value” – Hmmm…..

The meeting of bankers and politicians on Jekyll Island in November 1910 laid the foundations for the Federal Reserve Bank. Three years later in 1913 the Fed was founded.

From that moment on, private bankers were running the US monetary system including the printing of money. But the British pound, backed by gold until 1931, was the global currency of choice until then…

CURRENCY SYSTEMS ARE EPHEMERAL
The Bretton Woods Agreement in 1944 established a new currency system based on the dollar. From that time, all major currencies were pegged to the US dollar and the dollar itself was pegged to gold at $35 per ounce. The dollar thus became the world’s reserve currency bolstered by big gold reserves. These were accumulated gradually from the early 1900s to the late 1940s. The US received payment in during WWII from its sales of arms and other supplies.

The 14,000 tonnes sold would today be worth a handsome $840 billion which certainly would have been useful in propping up the ailing finances of the US treasury. 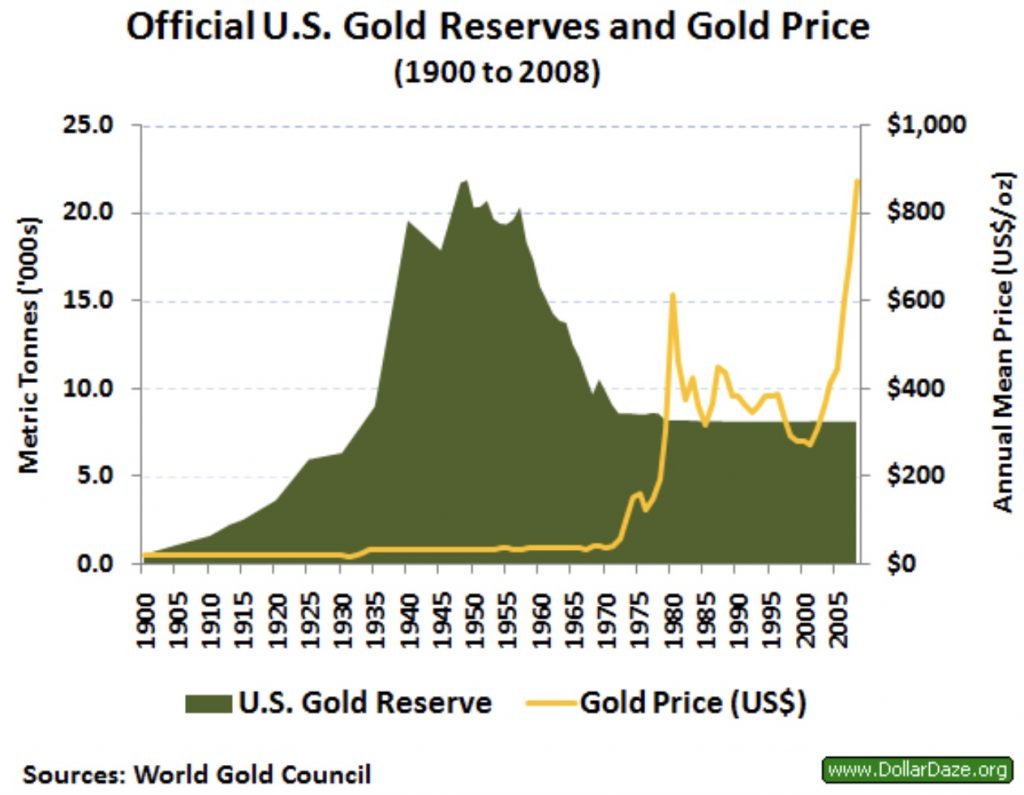 Most of the US gold was sold at a measly $35 per oz which tells that the US made an opportunity loss of $794 billion. And the people in charge of the Treasury and the Fed are supposed to be money experts. This tells us again that they don’t understand gold and they don’t understand history. They clearly don’t understand money either. Still they are only temporary custodians of US gold and the US finances and never have to directly suffer the consequences of their actions.

“You can avoid reality, but you cannot avoid the consequences of avoiding reality.”

In the current era of the golden calf and instant gratification, no leader, politician, central banker or commercial banker ever has to suffer the consequences of his own actions. Profits are always privatised and losses, without fail, socialised.

Whatever deficits or debts a President or Prime Minister causes, the consequences when he retires are fees in the millions for just selling your name. And the bankers continue to collect their bonuses and options whatever losses they incur.

So most of these individuals don’t ever have to bear te consequences of their actions. Instead normal people and bear the consequences through taxes and decreasing benefits like pensions, healthcare and a much lower living standard.

US – 90 YEARS OF DEFICITS
Since 1930, the US government has had budget deficits every year except a couple of years in the 1950s and 1960s. The Clinton surpluses were fake due to false accounting.

So for 90 years, the most powerful economic power in the world has been living on borrowed money and borrowed time.

The consequences are blatant and for most people to see, if they care to look. But their government won’t tell them and the media is too ignorant to understand it.

Probably not even 1% of Americans understand that their leaders and bankers are destroying their money on a daily basis.

How many Americans would understand that since 1971 their US dollar has lost 98% of its purchasing power? Virtually nobody realises that the dollar only buys 2% of what it bought in 1971.

And what did President Nixon tell his American compatriots in 1971 when he took away the gold backing of the dollar:

A DOLLAR FALL OF 98% SO FAR – ANOTHER 100% TO GO
Hmmmmmm! The chart below shows how the dollar was stabilised. A 98% fall of the dollar doesn’t look very stable to me. Instead it looks chaotic and catastrophic! 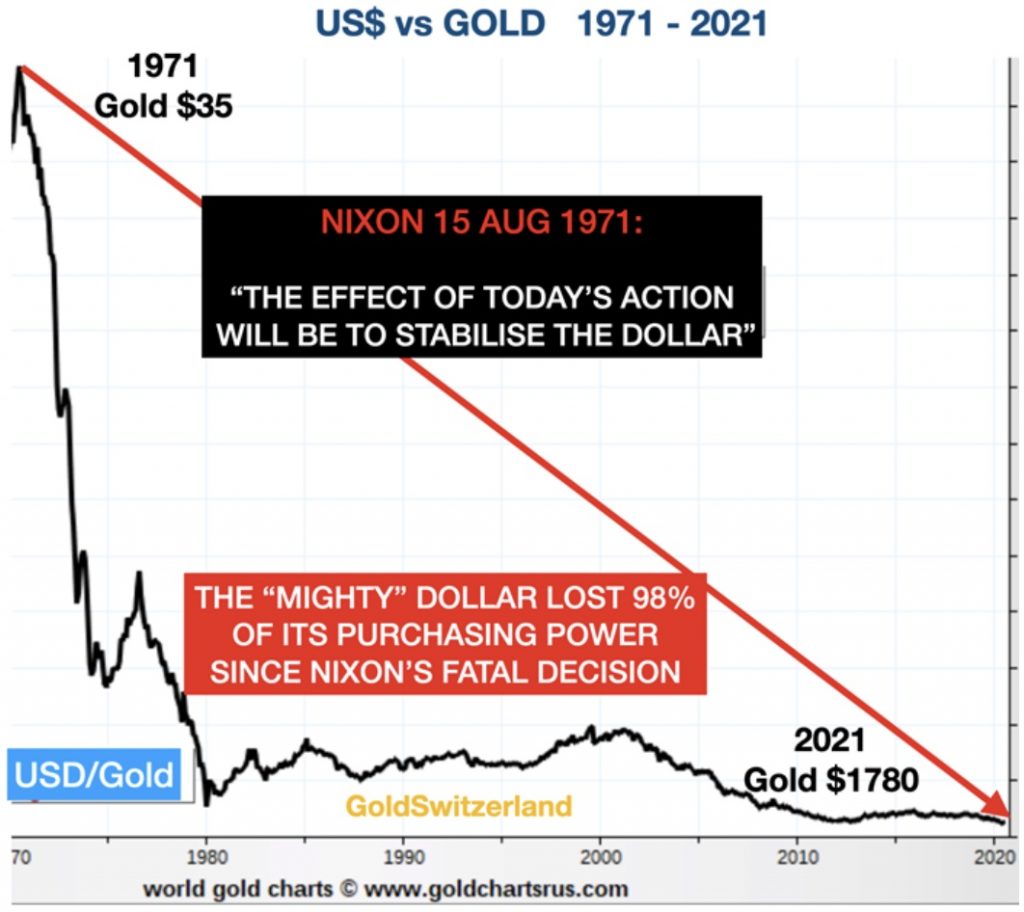 US DEFICITS ARE GROWING EXPONENTIALLY
Back in 2016 when Trump was elected I forecast that the US debt would be $28 trillion at the beginning of the next presidential period in early 2021.  No other forecaster saw an $8 trillion increase for the period after Obama. But I am no genius. The trick was easy. Just look at history. Since Reagan became president in 1981, US debt has on average doubled every 8 years. A simple extrapolation meant $28 trillion debt at the halfway stage and $40 trillion in 2025. But as the table shows below, I have now revised my forecast and am projecting $50 trillion by 2025. 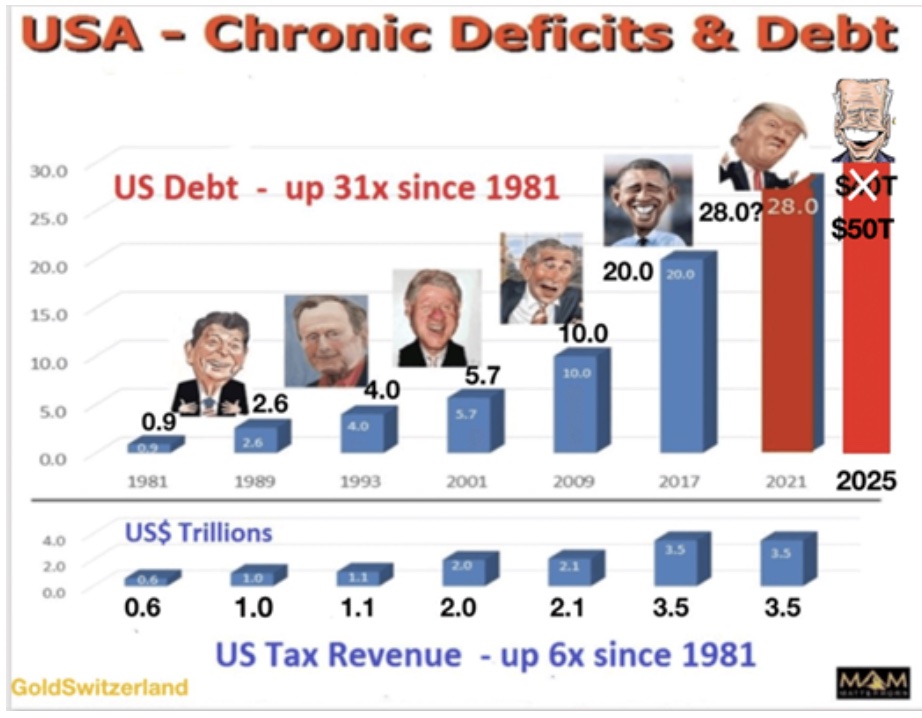 The US government is currently spending $7 trillion annually but the tax revenue is ONLY $4 trillion. So there is a net annual deficit of a mere $3 trillion or 43% of the US budget.

How can anyone believe that the US can repay a debt of currently $29 trillion and rising to $50 trillion with an annual deficit of $3 trillion – a deficit which is rising exponentially. The simple answer is that they never will repay it. Instead it will increase exponentially.

And don’t believe that the Fed will really taper the $120 billion a month that they are printing. They have declared a $15 billion tapering programme but that is a FAKE TAPER as my colleague Matt Piepenburg wrote about.

As expected they are cooking the books, giving with one hand and taking back with the other one – Plus ça change….. (the more it changes, the more it stays the same).

COVID – YET ANOTHER VARIANT
So now the world has yet another Covid variant. It seems as every time Covid recedes another variant (is invented) appears. Still, European countries are starting to lock down again. In the UK there are today only 2 cases of the Omicron variant. Switzerland has implemented 10 day quarantine for UK visitors and more countries are likely to follow.

At this point, nobody knows the severity of the Omicron variant but regardless countries are locking down. It is believed that Omicron has around 32 mutations and that current vaccines might not be effective. So now Big Pharma will come up with a new vaccine to be taken in addition to boosters and normal annual flu vaccines. It is a wonderful position for Big Pharma to be both expert advisor and beneficiary of Covid. The billions and trillions will keep rolling in.

CONSEQUENCES
We are not medical experts (there seems to be few impartial ones around) but we do understand the economic CONSEQUENCES.

In September 2019, major central banks gave the signal that they “would do what it takes” to keep the financial system afloat.

Covid which officially arrived early in 2020 was of course the most perfect excuse for starting yet another massive programme of unlimited money printing. Some people even believe that it was started deliberately but that could hardly be possible??

Whatever the severity of new Covid variants, it is crystal clear that the world will suffer economically, financially as well as socially.

In other words, all these additional problems are landing on a world which is morally and financially bankrupt. All the king’s soldiers and all the king’s printed money will not put this Humpty Dumpty world together again.

Let’s look at what we have:

The above events are the inevitable consequences of a financial and currency system that was doomed to fail when it was first devised by a few bankers in Jekyll Island in 1910.

As I said at the beginning of the article – Evil is the root of all fiat money!

Greed is a cardinal sin and the bankers and politicians at Jekyll Island were definitely clear of the consequences of their actions. With more than 100 years of reaping the benefits and creating extraordinary fortunes for a few, they needn’t worry.

But the rest of the world that just has debt and no savings is in for an extended period of misery.

MANY OF THE BEST THINGS IN LIFE ARE FREE
I don’t like being a Cassandra predicting doom and gloom that few will believe today.

But these are the consequences that history teaches us time and time again. But sadly everyone thinks it is different today.

Since every currency system in history has collapsed, it is quite a certain bet that this one will too.

For the few who have savings, wealth preservation in physical gold and silver is essential as insurance against yet another failed currency and financial system.

And for everybody it is important to remember that the most important things in life are family and friends. Helping others in difficult times is critical.

Remember also that many wonderful things in life are free, conversations, books, music and nature…This will link you directly to more fantastic articles from Egon von Greyerz CLICK HERE.