The man who has become legendary for his predictions on QE and historic moves in currencies and metals spoke with King World News about the implications of the G7 countries banning Russian gold.

STOP PRESS: G7 BANS RUSSIAN GOLD
June 26 (King World News) – Egon von Greyerz, Founder of Matterhorn Asset Management (based in Switzerland):  President Biden has today announced that the US and the other G7 nations will implement further sanctions by banning the imports of Russian gold. More of that and the consequences later in this article.

“To be wealthy and honoured in an unjust society is a disgrace.” ― Confucius

Confucius words from 2,500 years ago about wealth in an unjust society are sadly just as valid today as back then.

US & EUROPEAN SANCTIONS
Led by the US government, the US and Europe have recently sanctioned and confiscated the Russian oligarchs’ wealth.

Many parts of the world, for example New York, London and the South of France prospered greatly from these oligarchs spending without asking where the money came from. Swiss banks as well as other banks around the world built up major departments to attract the Russian money, often without asking how clean the money was. In our company, we didn’t take Russian investors since we found that it was very difficult to do proper compliance on them.

Nordic banks based in the Baltic states of Latvia and Estonia became specialists in laundering Russian money. Many hundreds of billions of dollars from Russia were welcomed by these countries especially Danish and Swedish banks.

The Russian oligarchs became ultra-rich in the 1990s as the state companies were privatised with a small group of businessmen being the main beneficiaries.

Yes, much of this was totally corrupt, immoral and unjust but no different than the wealth creation throughout history in many countries. In Britain for example, estates were gifted by the kings as favours for services whether political or military especially after winning wars…

The US is also “an unjust society”  today.  We could obviously follow the example of the current woke society and declare history unjust and immoral. But as I have explained before, we can’t just blame or “cancel” countries or individuals who have been involved in for example the slave trade.  The Europeans started occupying the US 400 years ago and “stole” the country from the Indians and killed many of them in the process. If the woke society were to be consistent, every invasion in history should be reversed.

So who determines when actions in history have been justified and when they have been “illegal” or unjustified. The Mongolian ruler Genghis Khan (12-13th century) is still revered in his home country but his methods were far from civilised. His soldiers destroyed, killed and robbed violently but did not build any lasting structures like the Brits.

The best way is to take history for what it is since we can’t go back. But since history repeats itself or rhymes as Mark Twain said, we have very much to learn from studying history. Sadly none of the leaders in the world are real students of history.

The point I am making by the historical deviation is that wealth has been created in many different ways which are unacceptable today but were totally natural at the time.

The oligarchs managed to grab major parts of Soviet industry in the 1990s. In the US massive wealth has been created in the last 100 years by the creation of the Federal Reserve, a private national bank owned by private banks and acting for their own benefit. 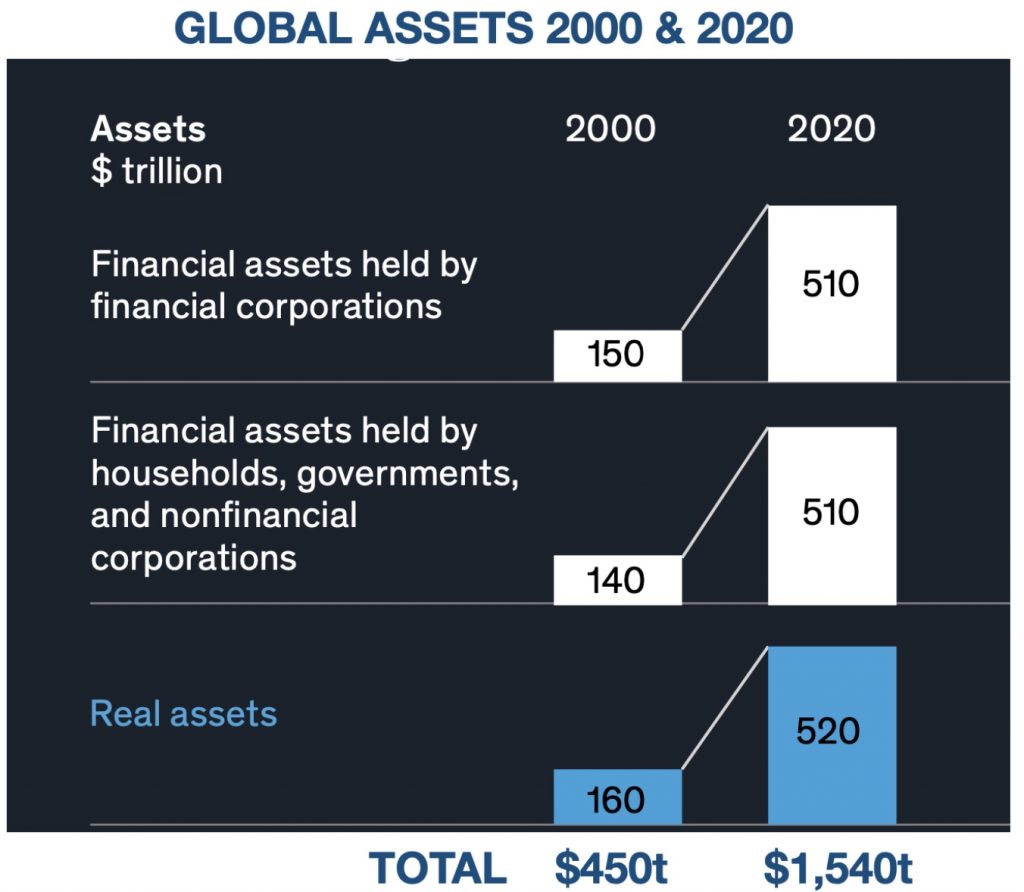 The closing of the gold window in 1971 ended all fiscal and monetary discipline and since then the US and much of the Western world has seen debt to GDP surge to well over 100%. In the US, Public Debt to GDP is now 125%. Back in 2000 it was only 54% but since then we have seen a vote buying system with a money printing bonanza and an exponential increase in debt to 125%.

A major part of the debt increase has gone to finance the rapid growth in property values.

The table below shows that property has grown on average by 250% between 2000 and 2020. So individuals are creating wealth by swapping properties with each other. Hardly a sustainable form of wealth creation. 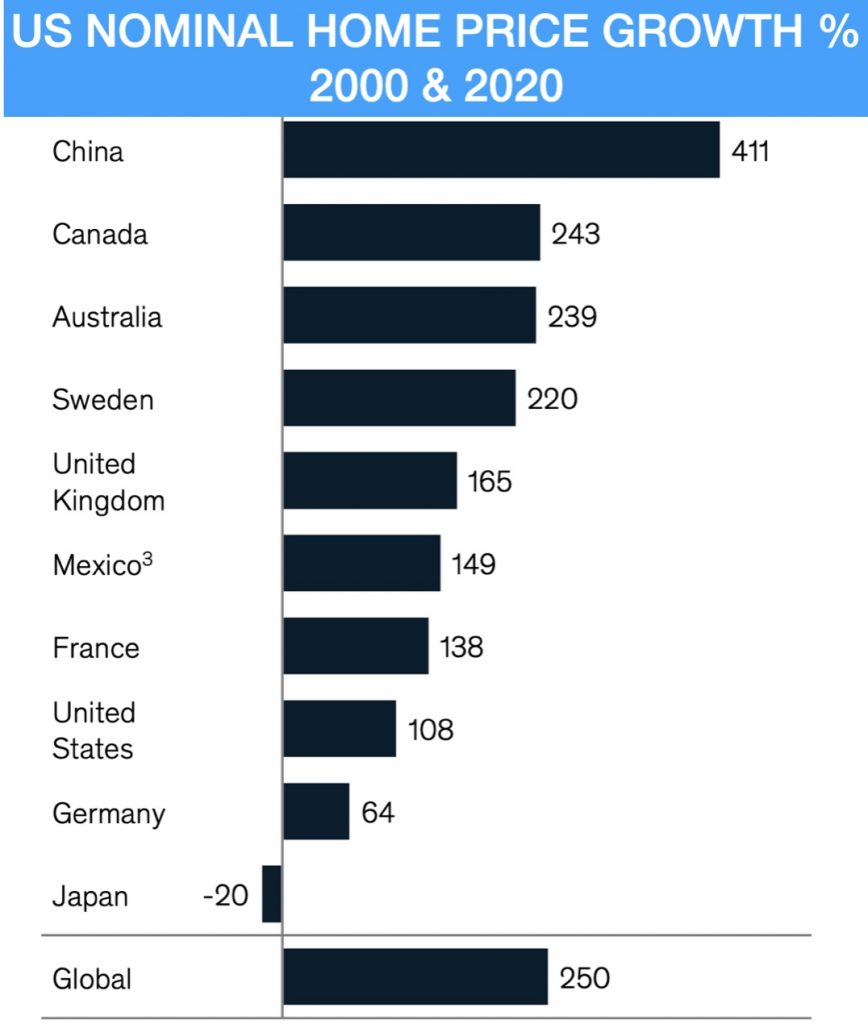 So both private and government debt is continuing to grow rapidly. But nobody should believe that it will stop here. The Fed’s intention to reduce the balance sheet is not working and the debt is at best going sideways currently.

BIDEN BANS RUSSIAN GOLD
So it is happening again. The US has decided to ban imports of Russian gold and told the whole G7 to follow suit. President Biden sent the following Tweet today: 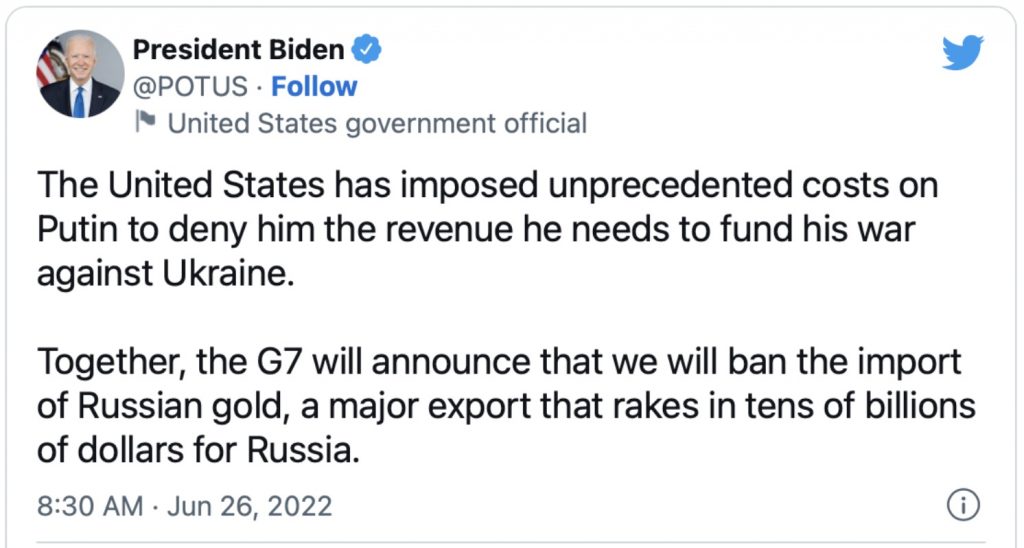 So what will the consequences be?

Russia is the second biggest gold producer in the world after China. Just like with oil, gas and many other commodities, the effect will be higher gold prices over time. The gold trade is international and the major buyers of gold are China and India. So Russia can continue to sell gold to the Far East, the middle East and South America.

Also, when the EU sanctions started, the LBMA (London Bullion Market Association) decided not to accept gold that had been refined in Russia.

So the effect of the G7 ban will be minimal since gold deliveries from Russian refiners to the bullion banks already stopped in early March.

Biden also signed an executive order on 15 March this year, prohibiting US persons to be involved with gold trading with Russian parties.

Still, more sanctions by the US and Europe will over time create shortages in gold just as it has in other commodities. So Russia will be able to sell its commodities including gold to other markets at higher prices.

But since Russia by far has the greatest commodity reserves in the world at $75 trillion, the value of these reserves are going to appreciate for years as we are now at the beginning of a major bull market in commodities.

The US and EU sanctions of Russia affect around 15% of the world population so there are still plenty of markets where Russia can trade.

The Roman Empire controlled parts of Europe, North Africa and the Middle East. The Empire prospered primarily due to free trade within the whole area with no sanctions. Sanctions hurt all parties involved. And since Russia is such a major commodity country that can continue to trade with major nations, they will over time suffer less than the sanctioning countries.

The consequences of these sanctions especially for Europe where many countries are dependent, on Russian oil and gas, will be totally devastating. So they have really shot themselves in the foot.

Coming back to gold, the US and G7 move is more likely to have a beneficial effect on gold over time with demand increasing and supply being restricted.

Gold started an uptrend in year 2001 that lasted for 10 years to 2011 when gold reached $1,920. After a major correction that lasted for 3 years until 2016, which took the price of gold to $1,060, gold has resumed its exponential uptrend as can be seen in the chart below.

Although gold has not yet made sustained new highs in dollars, we have seen much higher highs in gold against most currencies. The temporarily strong dollar is making gold look weak measured in the US currency but that is unlikely to last for long. 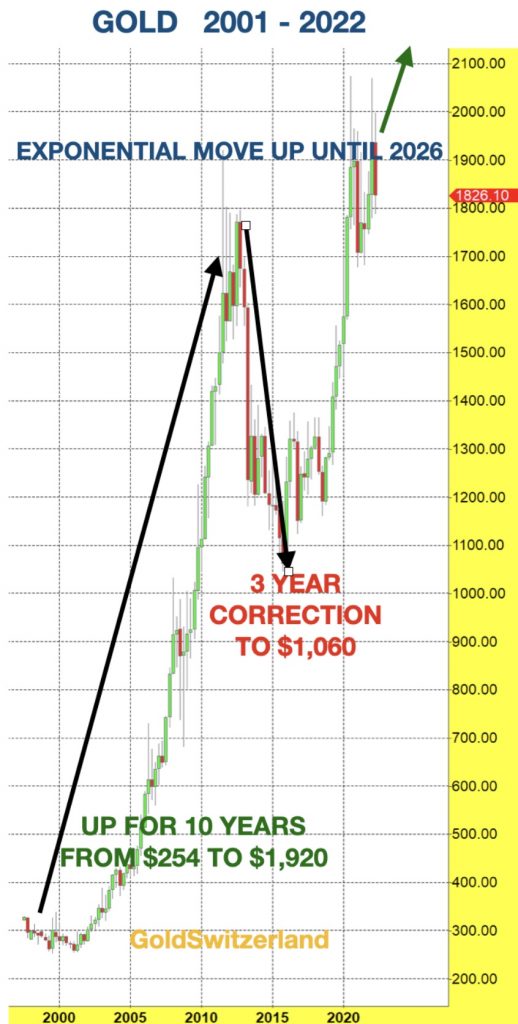 Wealth preservation
Our company made substantial purchases of physical gold at the beginning of 2002 for our investors and ourselves.  The price was then $300. We have never sold an ounce since then but added at opportune moments.

There was, as the chart above shows, a major move until 2011 and then a vicious 3 year correction to $1,060 before the bull trend resumed. As I mentioned above, gold has made much higher highs above the 2011-12 highs in Euros, Pounds,Yen, Swedish kronor, Australian dollars etc.

US dollar highs for the price of gold are just around the corner.

As we bought gold for wealth preservation purposes, it was essential that it was physical with direct ownership and control for the investor. To be able to inspect your own gold is also a requirement.

It is also imperative to store the gold outside an increasingly fragile financial system. If you buy gold as insurance against such an over-leveraged and weak system, it obviously serves no purpose to store it within that system.

To store your insurance asset in a safe jurisdiction is clearly critical. Especially with the current geopolitical unrest it is essential to take advice on location. Also important is to be able to move the gold quickly if necessary.

The reputation and values of the company that assists you with your gold investments must be impeccable.

It serves no purpose to make your choice based on the lowest cost of storage, insurance and handling when you are protecting one of your most important assets.

MAJOR GOLD MOVE COMING
As the chart below shows, gold is finishing a Cup and Handle technical pattern. It does allow for a slightly lower price before the next move up although that is not certain. Regardless, the major trend for gold is substantial and I expect a sustained move up to at least 2026 but probably for much longer. Obviously there will be major corrections on the way. 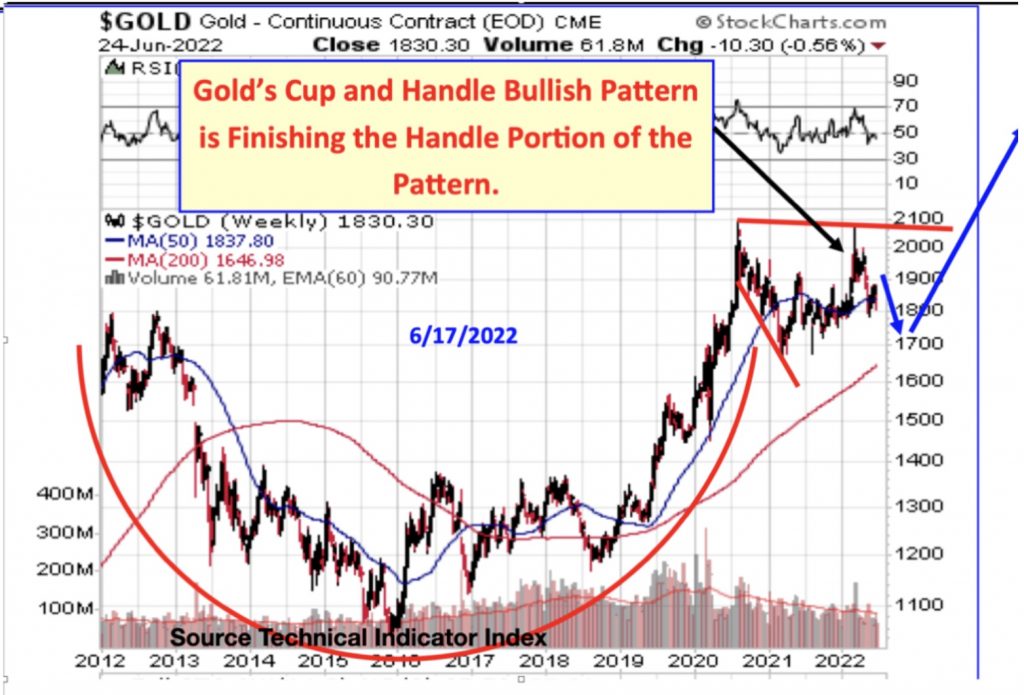