Wow, look at what just collapsed!

$1.44 Trillion QE Program
November 24 (King World News) – Peter Boockvar:  Before I get to the data (and sorry it’s a bit late), the fed funds futures response to the always dovish SF Fed president Mary Daly, but who does not vote in 2022, and who expressed the possibility of supporting a quicker taper depending on the data is now pricing in a 66% of a rate hike in May vs 54% yesterday. By year end 2022, the market is fully pricing in 2 rate hikes and a 60% chance of a 3rd. I say, let’s see if they can get thru ending a $1.44 Trillion QE program first without accident before debating rate hikes.

Inflation
As CPI comes out a few weeks before PCE, the PCE rarely deviates much from expectations and today was no different. The October headline figure was as expected when we include the one tenth upward revision to September. Versus last year it was up 5%. The core rate was higher by 4.1% y/o/y as forecasted.

CPI Inflation Number Is Pure Bullish*t But Here It Is… 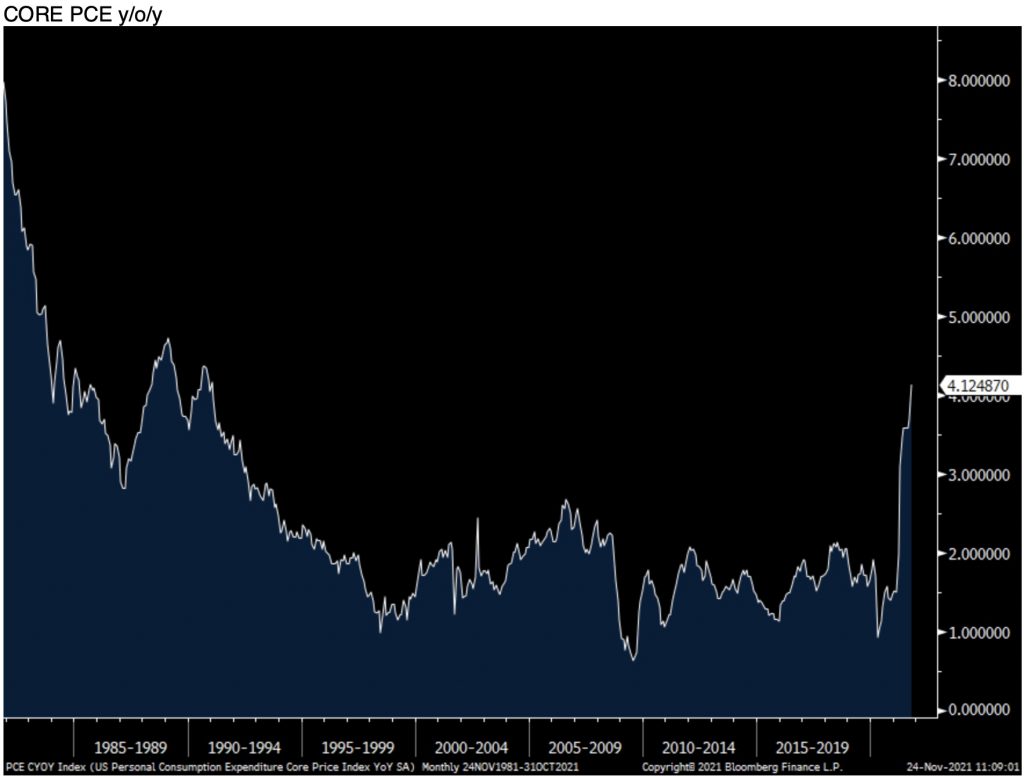 Again, medical care is the biggest component and Medicare and Medicaid reimbursement rates drive the calculation vs CPI where it calculates out of pocket spending. Housing is the 2nd biggest component but about half the contribution compared with CPI and both have yet to really capture the rise in rents.

Goods prices jumped by 7.5% y/o/y while service prices were higher by 3.7%. Energy was up by 30% y/o/y and food by 4.8%. As I said the other day, the relatively easy comparisons will continue thru February and then get tougher from March on next year. So, the rate of change will begin to slow but the question is to what level does it settle out at and gets to the transitory vs persistent debate. As I think it still settles out in the 3-4% range, I remain firmly in the persistent camp but you already know that…

Personal income in October rose .5% m/o/m, 3 tenths more than expected. Specifically looking at private sector wages/salaries (thus not including other benefits), saw a gain of 1% m/o/m and is running at a 11.8% annualized rate over the past 6 months. This, along with inflation, helped to lift personal spending by 1.3% m/o/m in October vs the 1% estimate. Spending again on goods led the way. To inflation adjust, personal spending (with retail sales a piece of this) since the March spike is up 5.4%. Headline PCE is up by 3.4%. CPI is up by 4.5%. 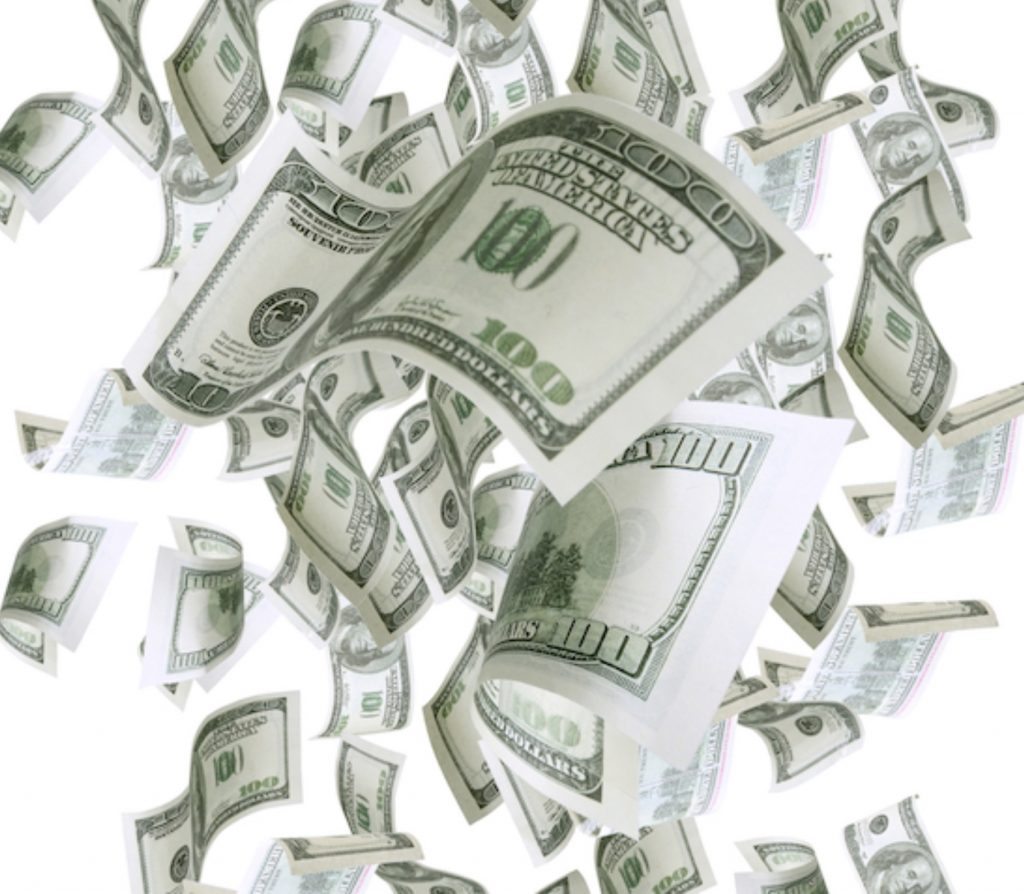 ALL THAT HELICOPTER MONEY IS GONE:
Consumer Savings Rate Has Collapsed! 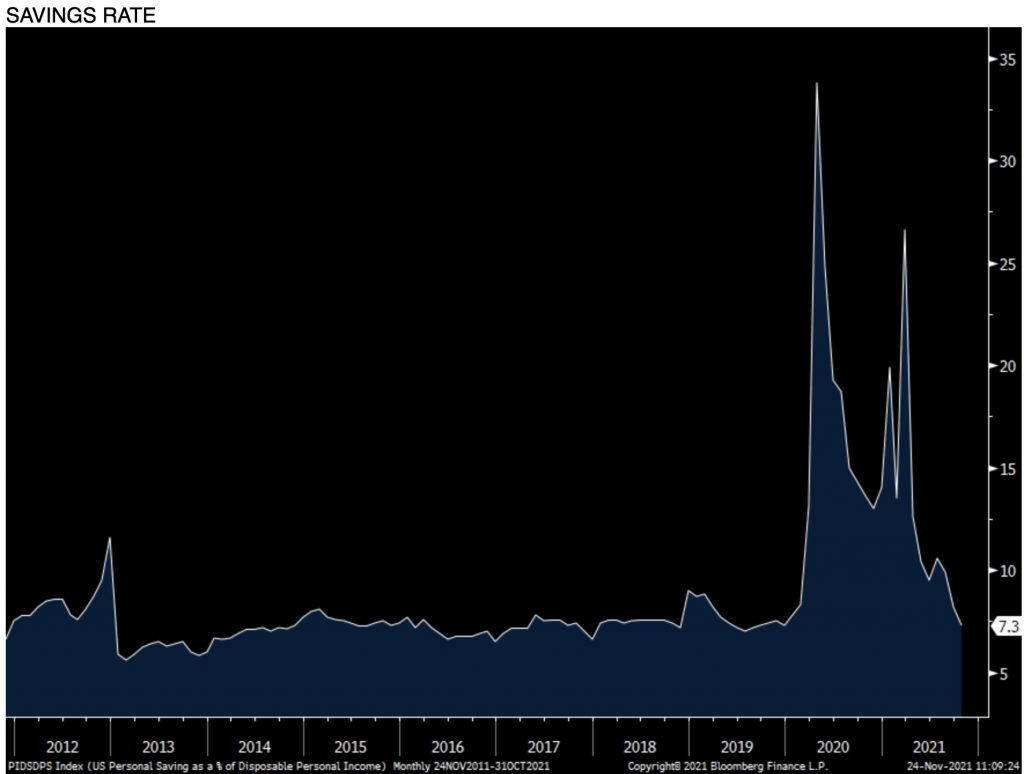 The key question for 2022 with respect to consumer spending is to what extent higher wages and this savings rate pool offset the rise in inflation and the reduction in the pace of government transfer payments that were large in 2021 relative to what they will be in 2022.

New Home Sales
New home sales in October totaled 745k, 55k less than expected and September was revised down by 58k to 742k. The average year to date is 779k. 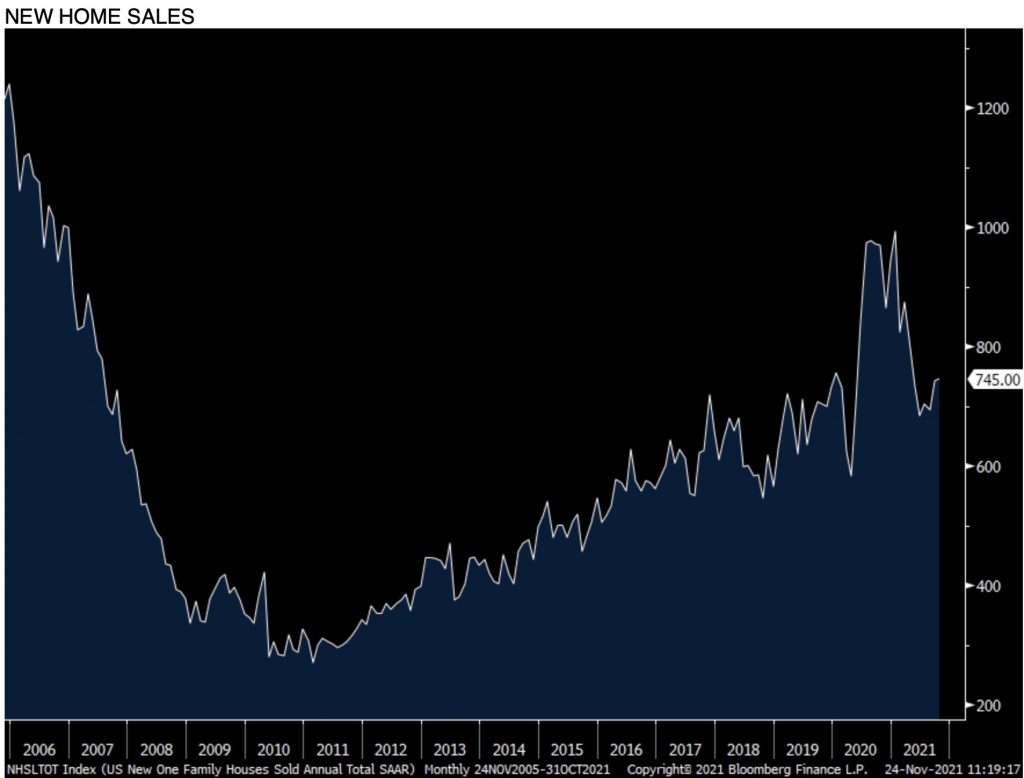 A combination of challenges with delivering fully built homes and sticker shock on the part of first time buyers likely explains the moderation particularly over the past 6 months. Months’ supply was 6.3, about in line with the long term average but this calculates homes that haven’t been built yet or finished but there is a contract. To highlight this, of the 745k homes with signed contracts, 183k homes were completed with 291k ‘under construction.’ There was a jump to 271k from 199k of those ‘Not Started.’ The median home price was up 17.5% y/o/y.

Bottom line, to echo again, we need more lower priced homes that first time home buyers can buy themselves rather than see an institutional buyer take it instead and then try to rent out. On one hand, we need a slower pace of home price gains to allow these 1st time buyers to afford a home but on the other, it just makes it cheaper for that iBuyer. I keep highlighting the 1st time buyer because the housing market flows from them as the trade up buyer needs a 1st time buyer to sell to.

Faltering Consumers
If you made it this far in reading (thank you btw), I’ll be quick with the November UoM consumer confidence index since it’s just a final one compared to the preliminary one we saw a few weeks ago. The final read was 67.4 vs the preliminary one at 66.8 and this compares with 71.7 in October and is the lowest in 10 years. 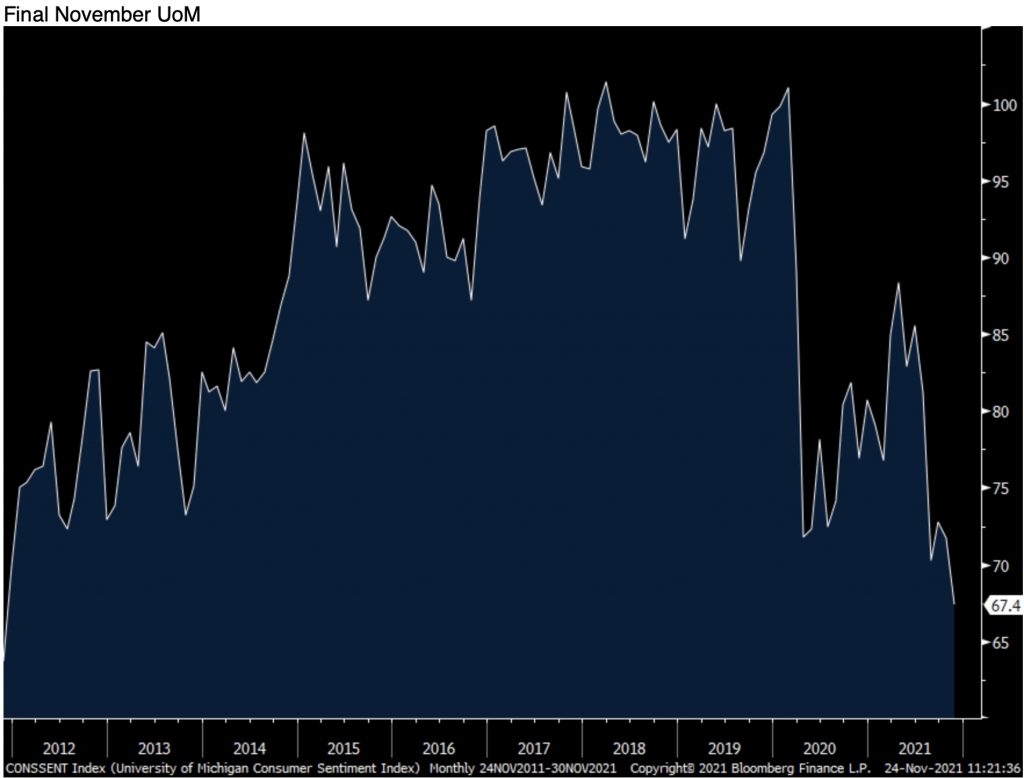 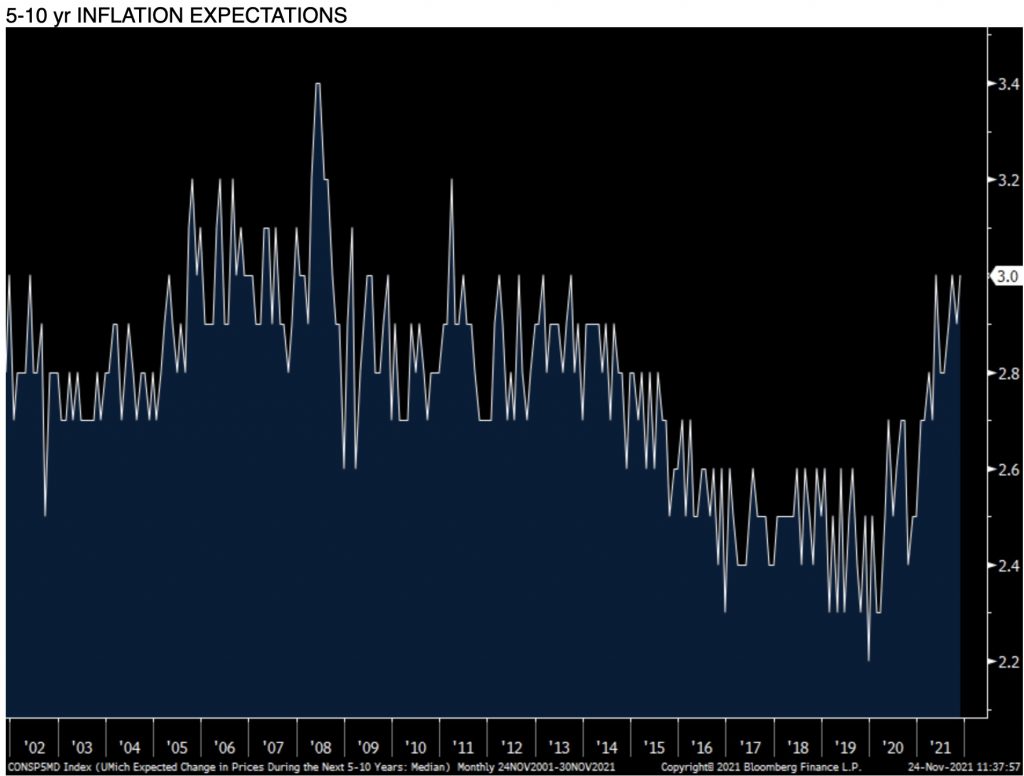 The UoM’s bottom line: “The decline was due to a combination of rapidly escalating inflation combined with the absence of any federal policies that would effectively redress the inflationary damage to household budgets.” Tighter money and less government spending I say would be those federal policies needed by the way.

Bill Fleckenstein Covers Everything From Gold To Warren Buffet And The FOMC, Plus A Bonus Q&A