With continued uncertainty in global markets, today two legends in the business sent King World News powerful pieces covering everything from the worries in global markets to a surprise in China and comparisons to 2011.

“Jeff, given yesterday’s stock market action do you think we have put in a double bottom in the S&P 500?” — A New York based portfolio manager

The above quote and the following note is Jeffrey Saut today:  “That’s certainly a good question given Wednesday’s Win, but I still think it is too soon to tell. He then asked about the “undercut lows” I have mentioned that were the sequences that bottomed the equity markets in 1978, 1979 and 2011. To reiterate, the S&P 500 (SPX/1920.03) slid into a “capitulation low” followed by numerous failed rally attempts. Then, before the final bottom occurred, the SPX came back down to the capitulation low and broke marginally below it with what a technical analyst would term an “undercut low.” To show the portfolio manager said sequence, I whipped up the attendant charts (page 2) showing the “capitulation low,” the subsequent back-and-forth action, punctuated by the “undercut low.”

The entire sequence tends to encompass 6 to 8 weeks. “Interesting,” he said, “But can you remind me of the news backdrop during the 2011 bottoming sequence? Was the news as bad as it is now?” A quick look at my notes showed that: 1) days before the U.S. defaults on some of its debt payments, the White House and party leaders agree to raise the debt ceiling; 2) S&P downgrades the U.S. debt rating stating the budget deal doesn’t do enough to address the long-term picture of the country’s finances; 3) the Occupy Wall Street protest begins in Zuccotti Park and spreads across the country; 4) Egypt’s Mubarak resigns as President ushering in the Arab Spring; and 5) the Japanese yen surges to a record high against the U.S. dollar.

This sequence is shown in the idealized chart formation on page one. While short-term traders can take heart in yesterday’s explosion and trade the upside using Tuesday’s lows as a stop-loss point, investors should likely wait until the double-bottoming pattern clears the top-side of the middle part of the “W” that was achieved on 9-17-15 at ~2021 before committing new capital. From a technical standpoint, that would complete the double-bottoming formation. Yet even then, I would be very careful as to where to commit capital because there is MASSIVE overhead resistance (read: supply) in the 2030 to 2100 level on the S&P 500, and because there was a Dow Theory “sell signal” on August 25th that is not going to be reversed quickly.

In this environment securities selection is important, which is why you need a good financial advisor. In past missives, I have featured a number of mutual funds and stocks that I have purchased over the past 5 weeks on the hope that we are in a bottoming phase. While we are hopeful a double-bottom has been achieved, the weight of the evidence is still out.”

This is from Art Cashin’s note today:  “Overnight And Overseas – China markets are closed for Golden Week but Chinese PMI came in better than feared and that allowed Australia’s market to rally about 2% as did Japan.

In Europe, markets shot higher on the opening but gave back a chunk of the gains by midday. U.S. futures are higher but well off the overnight highs.

Among other assets, the yield on the ten year is a touch higher, while crude is smartly better, which should help equities overall. Gold and the Euro are lower. Most commodities look a touch softer.

European refugee problem is becoming more difficult and expensive. Merkel looks to toughen asylum laws. It may make page one next week.

Consensus – They look to open better, helped, as noted, by crude. Next pocket of resistance in the S&P should be 1928/1932. Welcome to the fourth quarter. Nonetheless, stay wary, alert and very, very nimble.” ***ALSO JUST RELEASED:  Frightened Investors Withdrew A Staggering And Near Record $63 Billion Out Of Mutual Funds In The Past 3 Months CLICK HERE. 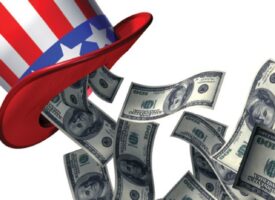