With gold and silver moving higher once again, will this be the big surprise of 2017?

Gold and Stocks
By Ronald-Peter Stoeferle, Incrementum AG Liechtenstein
July 20 (King World News) – When our last gold report was published, the Gold Bugs Index (HUI) stood at 240 points. After a stunning rally of more than 180% in eight months, the sector suffered a 61.8% correction of the advance. Since the beginning of the year, the tide has turned again and the technical picture has clearly brightened. In the following pages, we will discuss why we believe that the turnaround last year marked the end of the cyclical bear market and why the rally in the precious metals sector has probably only just begun.,,

To begin with we want to once again highlight the enormous volatility and inflation sensitivity of the mining sector. As the chart below illustrates, gold stocks are anything but “buy and hold” investments and should be actively managed. The following quote confirms this as well: “Market and sector forces together typically cause 80% of the price movement in a stock. That means the company fundamentals usually account for less than 20% of a stock’s price movement. This is the reason a company’s stock price sometimes seems to move independently of the fundamentals.” 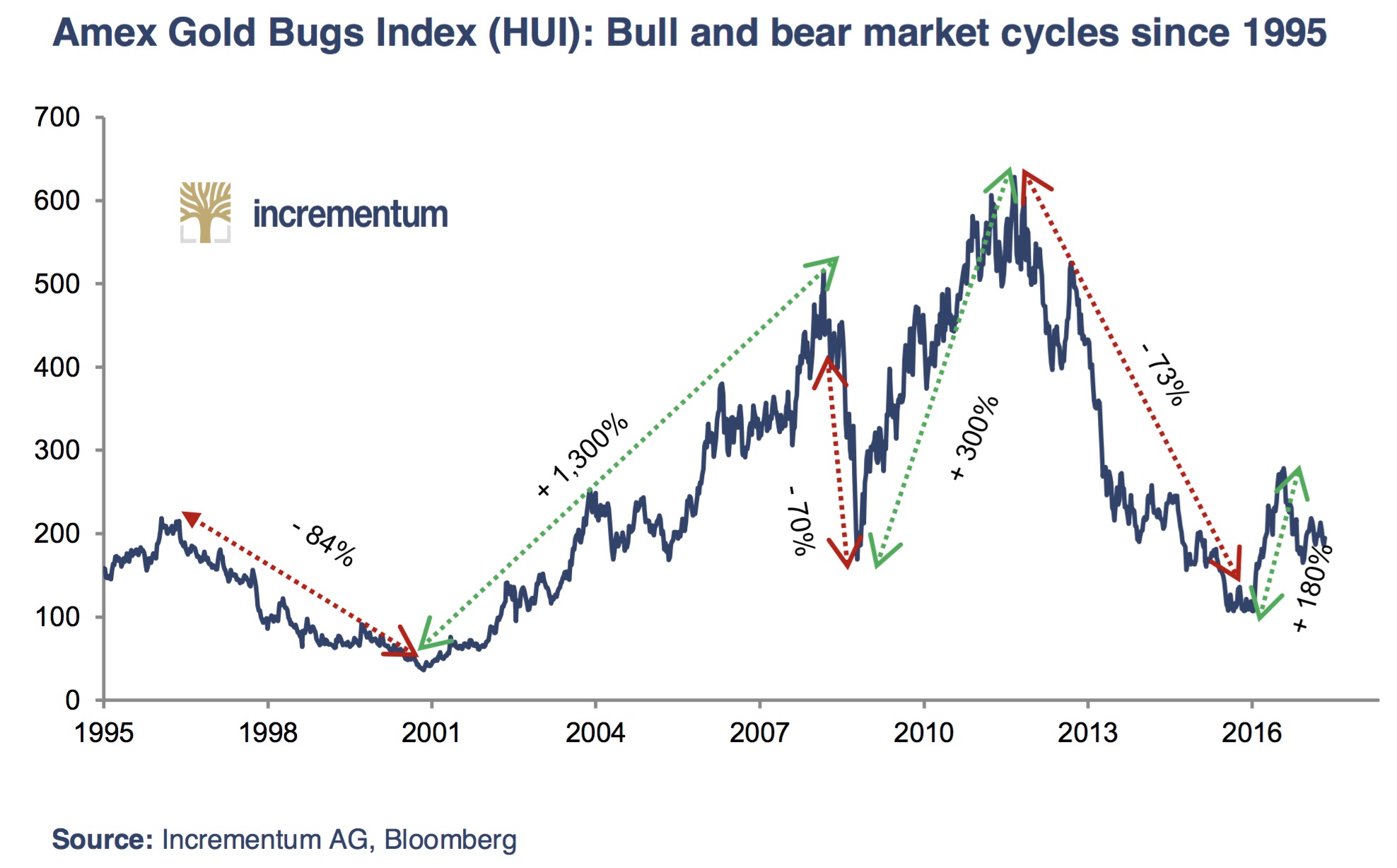 A glance at the market capitalization of gold mining companies reveals a significant valuation discrepancy compared to other asset classes. At the moment the entire HUI, which includes the 16 largest unhedged gold producers, is valued at a mere USD 99 bn. This amount represents just 0.4% of the market capitalization of all S&P 500 Index members. The market capitalization of Apple alone exceeds that of the 16 companies in the index by 720%. Another interesting numbers game: One could use the cash hoard of Apple (AAPL) to purchase the entire Gold Bugs Index 2.5 times over, or alternatively buy 6,500 tons of gold. If Apple did the latter, it would be the second largest gold holder in the world. 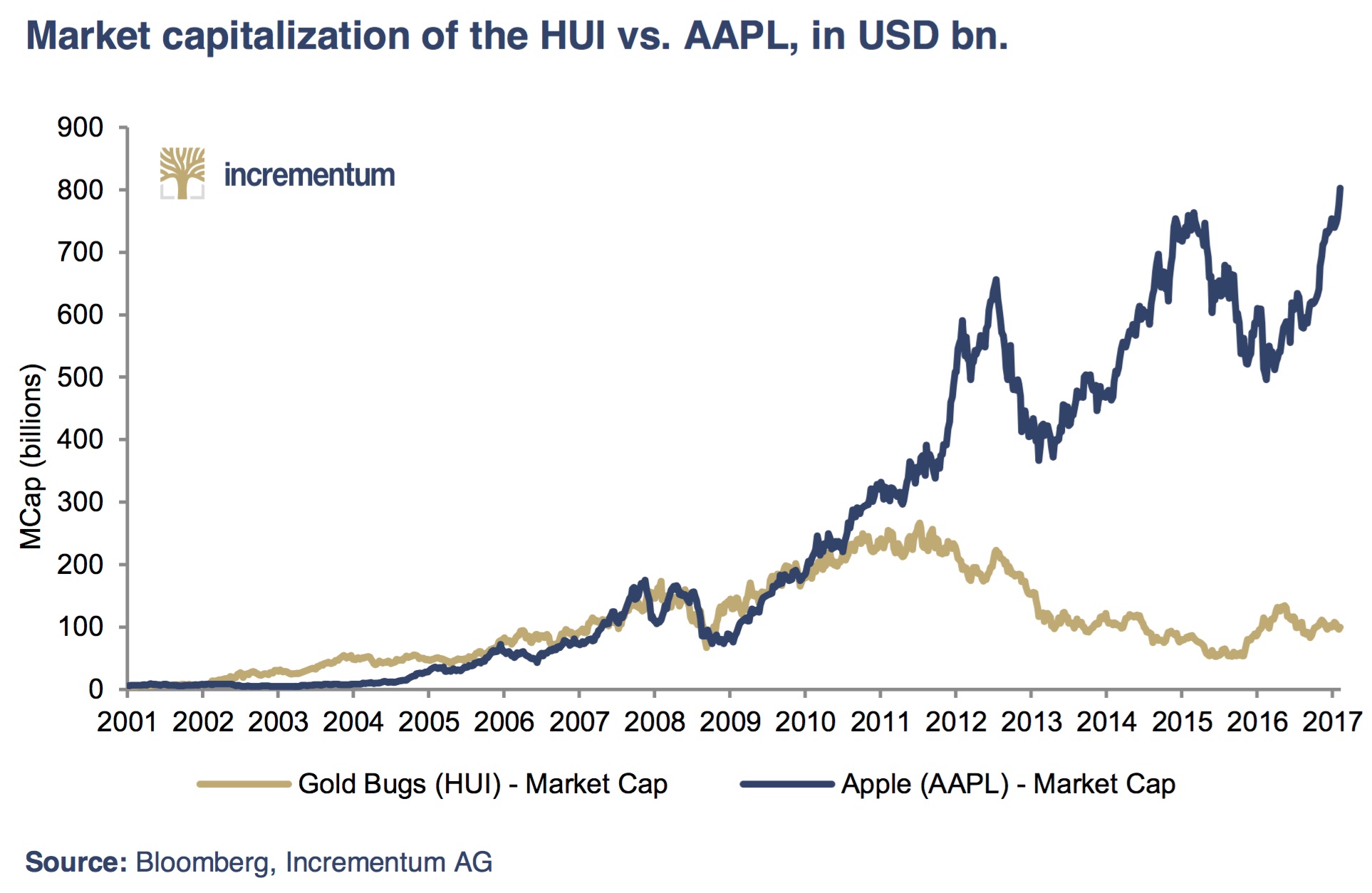 Looking at gold mining stocks in comparison to the broad market, it becomes evident that the gold sector has been viewed with extreme skepticism since 2011. Currently the ratio stands at the same level as in 2001, when gold was trading at USD 300/oz. and the great bull market had just begun. Should the 20 year weekly high in the ratio established in 2011 be reached again, the XAU Index would have to rise to 460 points, ceteris paribus. That would be equivalent to a gain of more than 370%. Even though such figures may appear to strain credibility at first glance, one must keep in mind that euphoric rally phases in the precious metals sector have quite often occurred in the past. Such targets for the index are conceivable particularly in times of rising price inflation rates and a loss of confidence in the monetary system. 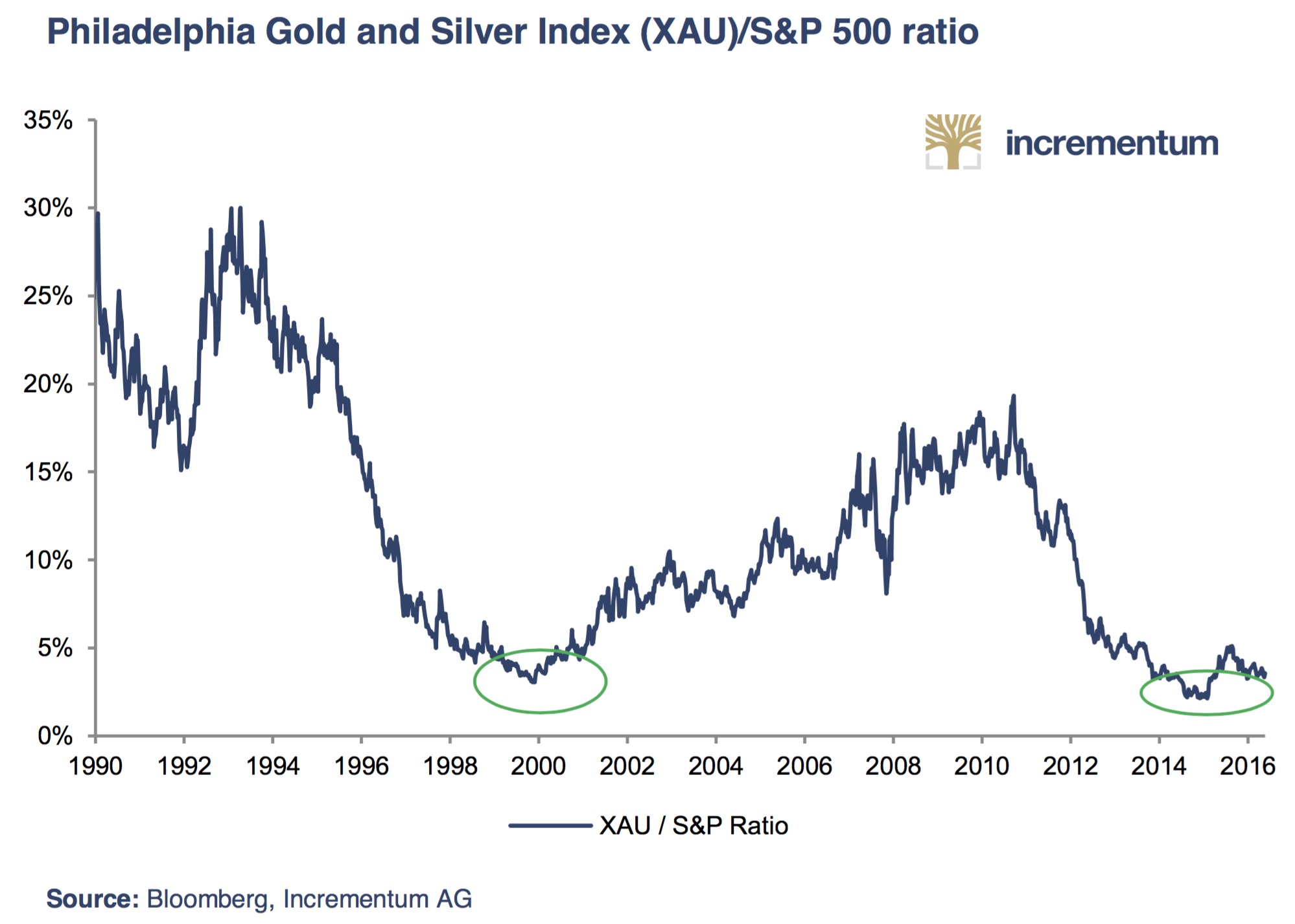 A clearly positive trend is also detectable in terms of operating earnings. The gold industry has evidently learned to live with lower prices. In 2012 and 2013 the component companies of the HUI index still generated significant negative cash flows. The situation brightened considerably in ensuing years. Last year the gold mining companies in the index generated free cash flows totaling USD 4.8 bn., which exceeded the previous record high of 2011. 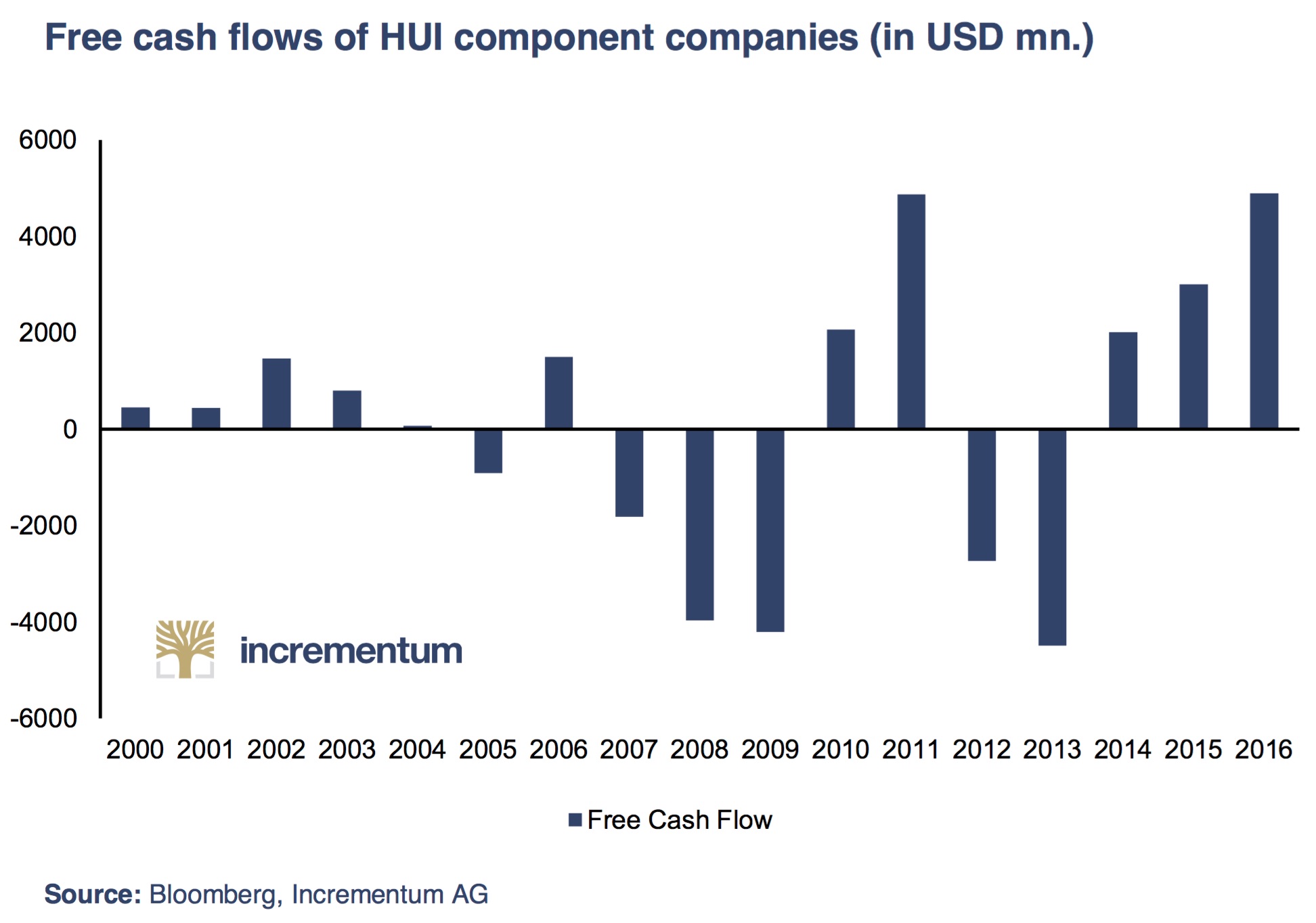 Conclusion
We are convinced that due to their response to the four-year long bear market, the majority of gold producers rests on a more solid fundamental basis these days. Efforts to improve operations have left producers leaner, have reduced their debt burdens and ensured that they will benefit to a greater extent from a rally in gold prices. A preview of the sector’s asymmetric return potential and its greater gold price leverage was provided in the first half of last year, when gold stocks rallied by 180% while gold generated “only” a gain of 28%.

Our confidence is also boosted by the fact that few sectors are currently more underweighted by the investment community than mining shares. The sector’s tiny market capitalization proves this assessment indirectly. Thus, we expect that after a lengthy and demoralizing dry spell, mining companies and their long-suffering shareholders will finally reap the rewards for their patience. The industry must continue to deliver on the promises made in recent years and keep working on rebuilding investor confidence.

We remain firmly convinced that the large valuation discount at which gold stocks trade relative to the broader market is going to narrow over the long term. For contrarian investors, the precious metals sector represents an attractive niche offering an excellent risk/reward profile over coming years.

The focus should be on conservatively managed companies which are not merely pursuing an agenda of growth at any price, but are instead prioritizing shareholder interests. From a valuation perspective, the growth rate of free cash flows, reserves per share, and earnings growth per share strike us as the most important financial metrics. Often these have to be assessed over somewhat broader time frames than the quarterly song and dance that seems so (needlessly) relevant to other sectors, as the mining business is subject to relatively wide fluctuations based on seasonal factors, mine sequencing, capex cycles, and so forth. One should try to avoid investing in companies with a habit of incessantly diluting their shareholders by flooding the market with new share issues, particularly if one aims to hedge oneself against the inflationary policies of central banks.

In our investment process, we are currently focused on developers and emerging producers. Based on the premise that the bull market in gold has resumed, we expect the gold-silver ratio to decline over the medium term from its current elevated level.  In such a scenario, particularly promising investment opportunities should emerge in the stocks of silver mining companies.